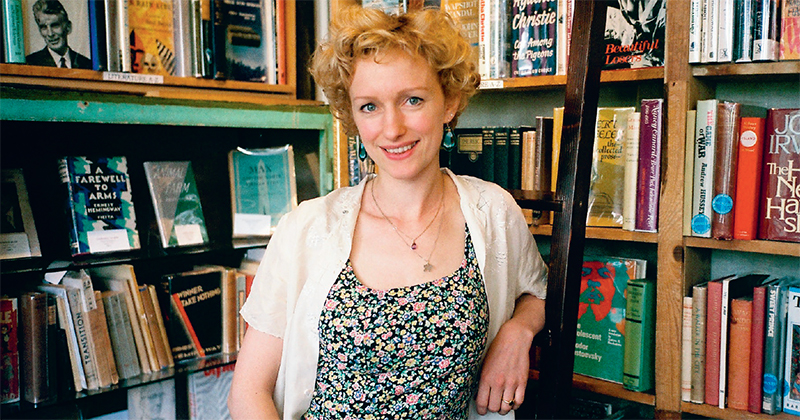 In Sylvia Whitman’s Paris, Everything Revolves Around Poetry

The Daughter of Shakespeare and Co.'s Founder on Running her Father's Shop

By Jeanne Damas and Lauren Bastide

Sylvia Whitman is radiant, bubbly and approachable when she greets us at the Shakespeare and Company bookshop on the banks of the Seine. It’s an autumn day and Paris is gilded in shades of red and orange. The Seine riverboats ripple the water below Notre-Dame Cathedral as we sit down at a table in the little café adjoining the bookshop and prepare to indulge in apple and pear smoothies and avocado toast. Sylvia seems very British to us with her good manners, use of irony, her floral dress, blue eyes, the way she orders a cup of tea at the bar, and her delicious accent as she tells us stories about her dog, Colette, whom she takes for a walk every evening along the embankment.

Then again, she could be the most Parisian of all the women we’ve met. Paris has run through her veins since early childhood, and like the heroine in a novel, her life has had a series of unexpected twists and turns, sometimes extraordinary, sometimes romantic, sometimes tragic. And Paris has always provided the backdrop to such unforeseen events. Each and every one of them. Her picture-postcard Paris serves as a setting for the bookshop she inherited and now runs (along with her husband, she manages a team of almost 40 people working at both the bookshop and the adjoining café). 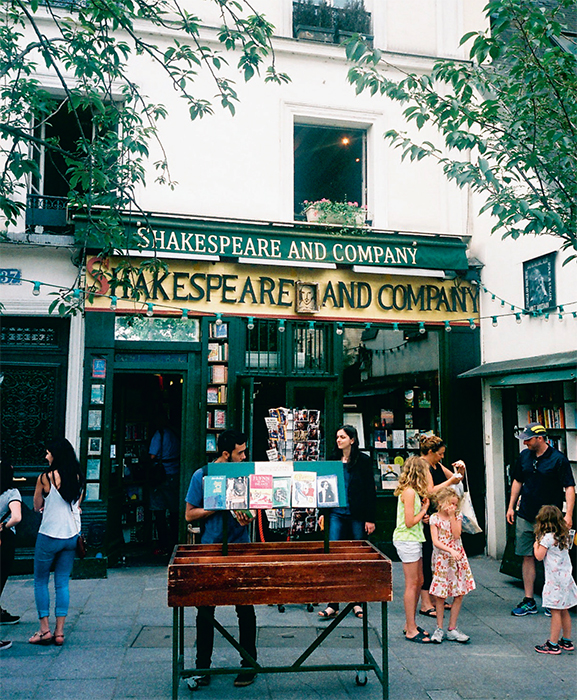 Sylvia Whitman’s domain is like a cross between the worlds of Amélie Poulain and Esmeralda: you can see the green metal boxes of second-hand booksellers along the banks of the Seine, the Pont au Double bridge, the river’s Cité island and the tips of the towers on Notre-Dame Cathedral as they pierce the sky. “Notre-Dame amazes me every day. I’ve never seen the same light twice on the steeples.” She describes her life like the opening of a novel, and her city like a poem. Even if you’re a bookseller, you can tell your life story that way only when you live in Paris.

“I was born in l’Hôtel-Dieu hospital, just opposite, on île de la Cité. My mother was in the bookshop when her contractions started. She rushed across the bridge from the other side of the Seine so she could give birth there. When I was little, that was where I went to nursery. I have very warm memories of my early childhood in Paris. I remember the light that filtered through the windows of our apartment, the smell of the métro and boulangeries.” Sylvia Whitman is the daughter of George Whitman, an erudite American who fell in love with Paris after World War II and decided to move here “because he wanted to live in a city where people are poets and life is poetry.” In 1951, he founded this bookshop on rue de la Bûcherie, and in 1964 he renamed it Shakespeare and Company. Whitman took the name from an old bookshop run by another Sylvia, Sylvia Beach, at the start of the 20th century on rue de l’Odéon. In her bookshop Beach had mixed with the likes of James Joyce, Ernest Hemingway and F. Scott Fitzgerald. In the 1950s in George Whitman’s shop, it wasn’t that unusual to bump into Allen Ginsberg or William Burroughs. “My father was an eccentric character and a bit of a Don Quixote. If he was bored during a reading, he would burn his hair. For him, a world outside the bookshop didn’t exist. He always left the bookshop door open so that the world could dive right in. He had a lot of thefts though.”

“She describes her life like the opening of a novel, and her city like a poem. Even if you’re a bookseller, you can tell your life story that way only when you live in Paris.”

“‘Be not inhospitable to strangers, lest they be angels in disguise'” is inscribed on one of the beams in our bookshop and was a very important motto for my father and increasingly important in my eyes, when you see what’s happening in the world. He’d traveled a lot, especially in South America. He was 38 when he opened the bookshop. And he was 70 when I was born.”

She was still very young when her parents divorced, and she ended up in London with her mother. She had almost no more communication with her father at that time. She went to boarding school in Scotland where, she tells us proudly, she wore a kilt every day. She continued her studies in London and didn’t see her father again for almost ten years. “And then at the age of 21, I suddenly realized that he was 91 and I needed to see him again before it was too late.” George greeted his daughter in a very casual manner, introducing her to everyone as an English actress called Emily. “But he threw me into the bookshop and passed everything on to me. We became best friends. I wasn’t a big reader before. And it was then that I fell in love with the bookshop and with Paris.” 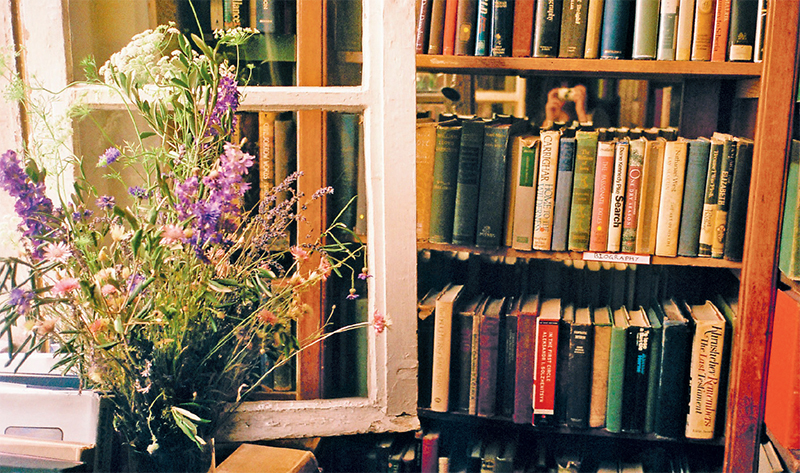 Sylvia continues to tell us her story as she takes us on a tour of Shakespeare and Company, a maze of wood and stone. The charm of Paris as it used to be long ago is captured in the low ceilings, uneven floors and wobbly stairwells. Rue de la Bûcherie dates back to the 12th century. Since 1951 the shop has also accommodated many writers in residence, both on couches within the shop itself, and now in George’s former apartment above. In keeping with a tradition established by George Whitman, each author who sleeps at Shakespeare and Company must write a single-page autobiography for the shop’s records. Sylvia shows us a heavy binder crammed with these literary testimonies. “This binder is full of Parisian dreams,” she says.

Sylvia tells us anecdotes about the capital that we’ve never heard before. For example, she knows that the oldest tree is in square René Viviani, and that Jane Birkin and Serge Gainsbourg met at Hôtel Esmeralda, just a stone’s throw away. But she has nothing to envy the legendary couple as her first encounter with her own husband sounds like something from a classic romantic novel. “He was writing an essay on Shakespeare and came into the shop because he was looking for a rare book. I said I’d take his phone number, something I never do! I’m still looking for his book . . . ” Their son, Gabriel, who is two and a half, has just made his first recommendation. He took five books off the shelf for a grandmother who was looking for something for her granddaughter. The family lives just a short walk away on rue de Pontoise, opposite the most beautiful swimming pool in Paris. “My intention was to go there every morning at 7 am, but obviously that’s not happened,” she says with a laugh. However, Sylvia has become an expert in the art of roaming Paris.

“I have a bike, I love cycling to see my friends in the 11th, 20th or 9th.” She likes to experience private moments in the city, strolling alone on the banks of the Seine in the morning. Or she likes to cross the Seine with a writer in the dead of night to find slightly seedy places and reflect upon Brassaï or Henry Miller while wandering past some street or other. “In London you’re always thinking about the dress or car you need to buy. I don’t think like that when I’m here. In London, everything revolves around money. Here, everything revolves around poetry.”

Jeanne Damas is a Parisian model, fashion icon, actress, designer, and photographer. She has collaborated with many international brands, including Gucci, Mango, Nina Ricci, Macy’s, and &otherstories and is one of Forbes‘ “30 Under 30.”

Lauren Bastide is a French journalist who has previously been the editor in chief of French Elle and a columnist on the famous French television show Le Grand Journal. She currently hosts the feminist podcast La Poudre.

In Praise of the Epistolary Novel 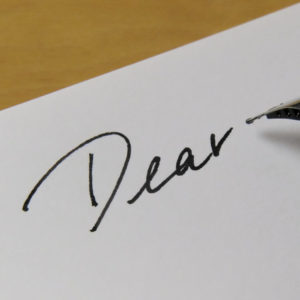 In Praise of the Epistolary Novel

In the current world of electronic communication, epistolary looks more like an online weapons outlet than its much tamer...
© LitHub
Back to top
Loading Comments...