In Sunshine and In Shadow: Remembering the Quiet Genius of Brad Watson

Editor and Friend Alane Mason on a Great American Writer

Many of you have already heard the awful news that brilliant and beloved and longtime Norton author Brad Watson—who wrote with the most extraordinary and profound awareness of the beautiful and cursed human body and its frailties—died suddenly of an apparent heart attack at 64 years old.

He was my first Norton author. I had fallen for his short story, “Seeing Eye” as a consulting editor at the old Story Magazine, while a young editor at the old Harcourt Brace, and begged to see more of Brad Watson’s work. When the collection came, and made my hair stand on end (with that proverbial prickle at the back of the neck that we editors are supposed to feel encountering realness on the page), I was about to accept a new job at Norton. I asked him to wait for me, and he did.

My colleagues, led by Starling Lawrence and Jeannie Luciano (with a strong support vote from Ed Barber, who almost never said anything about fiction but shared Brad’s roots in Mississippi and knew true kinship to Eudora Welty and Flannery O’Connor when he saw it), let me offer a two-book contract, for the stories and an unwritten novel. About the novel, we had one page, describing an old newspaper man in a town called Mercury, MS, trying to write an obituary for a local woman he’d loved since girlhood.

He’d been turned down by so many agents he didn’t want one, so I got the unheard-of chance to make him the offer directly, and hear him WHOOP! That was a great moment, for me. And I got to hear the next day about the embrace he’d got from his wife. Sounded like they had a good night. Later got divorced, but some things an editor can’t fix.

He was the most self-critical author I knew. I could never tell whether I was being encouraging by asking after a next book, or adding to his self-torment.

(Speaking of the divorce, she did write the most memorable-ever Amazon reader review of Brad’s first novel. Something along the lines of, “Well it must be true that great writers are horrible human beings because this book ruined my life and my son’s life. I hope it was worth it.” It had slipped through Amazon’s filters because she gave the book a five-star review.)

Last Days of the Dog Men won the Academy of Arts and Letters award for first fiction. The Heaven of Mercury was a finalist for the National Book Award (three judges came up to me afterwards to say he should have won). All four of his books were with Norton, a relationship that lasted 26 years. I was lucky to be in a place that made that possible. 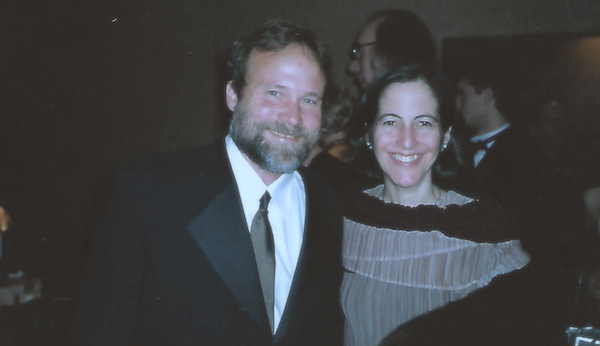 Brad Watson and Alane Mason at the 2002 National Book Awards.

In those early years of publishing and waning years of that marriage, I had a feeling or imagined that Brad had a little crush on me. Nothing untoward. Probably he made a lot of people feel that way, with his bashful modesty and awareness that his gap-toothed smile was damn charming. (A poet friend of his, platonically obsessed, wrote an entire cycle of “Watson poems.”) I am pretty sure my Brooklyn apartment turned up once in his work, in off-color context.

I translated a whole Italian novel in large part because I wanted Brad to read it, and had a funny gut feeling it could help to break his writer’s block. He humored me by saying it did.

He was the only author I ever called “one sick bastard.” I was in some shock after I’d read the scene of necrophilia in The Heaven of Mercury in which the son of an undertaker embraces, then finds himself fornicating with the corpse of a classmate—who, it turns out, isn’t actually dead. Please do not take this out of context. I thought maybe I should take it out, but isn’t this what we all do with these tributes—try to love the dead back into our lives, if not theirs, and without their consent?

Some other unmatchable, in some cases nearly unmentionable, moments in Brad Watson’s work:

*best ever, anywhere, description of a dog barking outside a door
*ditto of a dog watching a streetlight change
*most horrific Southern barbecue
*funniest, deepest story about “space aliens” residing at a local asylum
*most noble account of an old man on the toilet (and gorgeous, noble, thorny portraits of old people generally)
*worst marital argument, in which a man shoots himself in the foot to end it
*a young girl’s first sexual feeling sitting on the back of her dog
*most erotic description of the smell and touch of tomato plants
*a whole novel about a woman without a vagina
*This line in a fictional obituary: “She was the best at making a little gum ball out of sweet-gum sap of anyone yours truly has ever known.” Followed by: “She once at age 80 speared an actual mouse using one of those sticks with a nail in the end of it, used for picking up paper trash, disgusted that everyone else had been too squeamish.”

No one can write as good an obituary for him as that. Light and dark and genius, Brad Watson.

Aliens in the Prime of their Lives was a finalist for the PEN/Faulkner. Miss Jane was long listed for the National Book Award and won the Harper Lee Award.

Everything the guy published was prize-worthy. He wrote like a composer, every note held for just the right amount of time to make music.

He was the most self-critical author I knew. I could never tell whether I was being encouraging by asking after a next book, or adding to his self-torment. His office in the Wyoming home he shared with his beloved third wife, fellow writer Nell Hanley, is surely filled with dozens of unfinished novels, memoirs, stories, all growing toward the light.

In February, he wrote

Working on more than one thing, as always, but what seems to be getting some traction is work growing out of the two “boys stories” I’ve already published, “Vacuum” in Aliens, and “Eykelboom” from ‘14 New Yorker. Spreading out to other characters in the family and beyond, hoping it’s a novel of some kind. And maybe publishable stories along the way. The mother character, Evie Mae/Eve, is moving me, want to write about her as well as I did Jane but without the difficult-to-sell “problem.” 😕 As one French editor said, “I made sure not to mention the ‘incontinency’ during my pitch.” Alas.

If I had nothing but free time I’d be making more progress on my sideline projects, too, the strange road novel I drafted, the dark comedies I drafted (O’Connor, man-eater leopard) but never got right, etc. But at heart is the boys/mom/father, another story of Mercury, in the 50s-60s-70s which I see as an augury of the times we’re in now. Wish me luck.

In April, he said he was “working not too badly,” which was highly promising, from Brad. He was also asking what he could do to help a forthcoming collection by Randall Kenan. On Monday, he wrote seeking an agent match for another writer, sent love to my family.

Brad Watson didn’t much believe in Twitter or websites; few fans even knew that online, he was Wilton,

@WiltonBWatson; WiltonBradWatson.com—as if choosing invisibility, or at least minimum “discoverability.” He actually sought to promote others, students and friends, more than himself. He’d appreciate the mordant irony of Twitter serving his death notice. (Damn damn it to hell that I can’t joke with him about it now.) Many on social media are saying he was one of our best American writers.

Both of his novels end (not a spoiler) with intimate descriptions of his characters dying peacefully in old age. It’s a damn, blasted, unforgivable shame he didn’t get that for himself but I hope, in his last seconds, he imagined it.

“He wandered towards a spot of color in the distance and when he got close he saw that it was a bush filed with preening monarch butterflies, migrated there from South America, resting and soaking up the sunlight… They seemed to shiver under his rapt attention. He felt such an outpouring of love for them, he thought he would weep. They seemed hardly able to contain their delight that he was gazing upon their beautiful wings.” (from The Heaven of Mercury)

Alane Salierno Mason is an Executive Editor and Vice President at W. W. Norton & Company, and founder-president of the not-for-profit magazine for literature in translation, Words Without Borders.

Greenlight Bookstore is pledging to improve treatment of Black employees and customers. 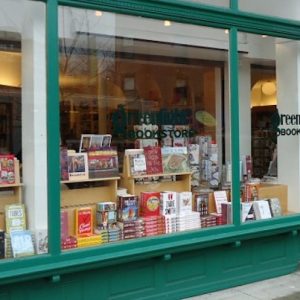 Greenlight Bookstore is pledging to improve treatment of Black employees and customers.

The owners of Greenlight Bookstore, which has two Brooklyn locations, came forward this week to take responsibility for "negative...
© LitHub
Back to top
Loading Comments...