Lucas Mann on the Emotional Depth of Aesthetic Surfaces

If I have to conjure a pure Wes Anderson scene in my mind, I think of a bright red elevator, two bellhops holding perfectly still, wearing deep royal purple with brass buttons, matching the dinner coat of their concierge, Gustave H., a stoic, pretentious tyrant in his beautiful little kingdom of The Grand Budapest Hotel. Gustave sits, holding the hand of his elderly guest/patron/lover who is leaving the hotel and, as she grows feebler and fascism encroaches on the fictional European country of Zubrowka, is afraid she’s afraid she’ll never return. He’s just told her that her choice in fingernail varnish makes him physically repulsed, but now he’s trying to soothe her. He recites a classic poem, all pretty nature imagery; everything in the shot remains perfectly still, except for her head, which moves to rest on his shoulder as he speaks.

The first time I watched it, I remembered some words of the poem to Google the source material, but the poem is an Anderson concoction, painstakingly crafted gibberish not connected to any real historical text. Every detail of this scene, not even a minute long, is striking, off-kilter, sentimental, near self-parody—perfect.

A new Anderson movie is out now, which means another occasion to have a conversation about whether the world needs a new Wes Anderson movie. For 25 years, Anderson has functioned as a sort of metronome in American cinema, a mainstreamed amalgamation of general ideas of indie, which is one of the easiest words to say with a sneer. Every couple of years, Anderson will do his thing and, as movie culture transforms around him, his consistency can feel like a bit, even though the content of his movies contains quite a lot of range in theme and subject matter. In a swelling sea of IP, sequels stacked, universes extending, Anderson has set movies in a train in India, a research vessel out at sea, a fictionalized Japan; he’s focused on the inner lives of children, of animals; he’s coaxed great performances out of multiple generations of Oscar winners and also decided to turn his attention to stop-motion animation twice, for no reason other than he felt like it and it looked nice.

Therein lies the central tenet of the Anderson doctrine—he will simply do the things that move him, and that has more to do with aesthetics, a fastidious visual order and a belief in the power of each detail, the care implied as the auteur’s hand guides us through every room, lingering on the fabric choices. Often, when watching Anderson, I think of reading Joan Didion. I don’t mean to suggest his work is as significant as hers, nor can I imagine any president setting a congressional medal of freedom down upon his blazer collar (unless Jon Ossoff’s star keeps rising, maybe). But there’s the thrill of first encountering them, often as a high school or college student—the amount of feeling that can be rendered out of things and the sense that you’ve been initiated into a special way of seeing, where beauty and melancholy sit hand in hand on the world’s nicest couch.

Then there’s the easy-to-point-out flip side—the arch uniformity of their vision, an appreciation of opulence and a seeming lack of activism that smacks of unchecked (or rather checked, noted, then not-apologized-for) privilege, their whiteness and often the whiteness of their devotees, myself very much included. In a 1979 takedown of Didion, Barbara Grizzuti Harrison writes:

…my charity does not naturally extend itself to someone whose lavender love seats match exactly the potted orchids on her mantel, someone who has porcelain elephant end tables… who is beset by migraines that can be triggered by her decorator’s having pleated instead of gathered her new dining room curtains.

It’s a critique of Didion that has popped up again and again over the decades, and now seems to recur every four to six months as a reliable way for writers to get retweets. It mimics exactly the tone of conversation every time Anderson delivers another tidy, twee bundle to an unraveling world. Can an artist obsessed with ornamentation have any real interest in substance? Isn’t there some unforgivable narcissism in making any story, no matter the subject, ultimately about the aesthetic comfort and filtered lens of the storyteller? Embedded in this critique is the assumption that style is uniformly superficial, not a particular way of seeing that allows its practitioner to observe and care about the world, but rather a nice painting hung over a window, a refusal to look outside.

For 25 years, Wes Anderson has functioned as a sort of metronome in American cinema, a mainstreamed amalgamation of general ideas of indie.

When Anderson is at his best, though, like Didion, the tension in his films lies in the disarray and dissolution of peoples’ lives beating against the unwavering prettiness of the world he’s built for them to inhabit. Everything is immaculate but untenable, and the characters know it; the viewer feels his façade creaking, cracking. His two most iconic films, made back to back in 2001 and 2004, embody this tension fully—The Royal Tenenbaums and The Life Aquatic with Steve Zissou. 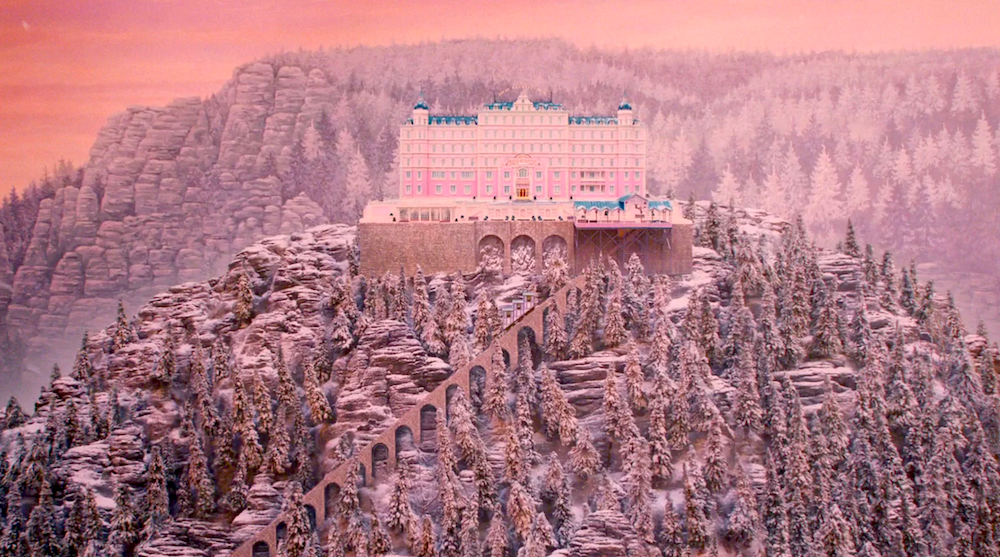 Each is a beautiful dollhouse full of depressed dolls who don’t want to be there. I remember the faded periwinkle uniforms of Zissou and his crew, staring helplessly out into black ocean from their rickety submarine, the pristine banana yellow of Richie Tenenbaum’s childhood tent, with its feeble disco ball and the optimistic light of an old globe, so starkly well-preserved as he displays the jagged scars of a suicide attempt. As much as the imagery overwhelms, it’s also made insignificant, and that hurts. We love it even as we mourn that it’s not enough.

The problem is that, after the success of those movies, the only legacy that seemed to live on was the way they looked, a vacuum of Pinterest board ideas. Too pretty, too easy, too identifiable—the way Didion’s work can seem if you only remember passive voice, lists, furniture, the letter I. Anderson seemed to matter less and less, as each new film could be fit into the aesthetic, then beg the question, where else can this go? For me, though, The Grand Budapest Hotel is the answer to that question—his greatest film and his biggest swing.  And while, for most directors, the big swing would be some huge departure from the expected, a bet-you-didn’t-think-I-could-do-this moment, Anderson instead doubles down, digging deep into the core of pure Andersonism and finding its beating heart. After all, it’s the heart that people question, never the skill.

The problem is that, after the success of those movies, the only legacy that seemed to live on was the way they looked, a vacuum of Pinterest board ideas.

I am given to autobiographical readings, so forgive me (actually, never mind—not apologizing) for saying that Gustave H. feels like the closest Anderson has come to depicting himself on screen. Or, more importantly, what he knows to be the idea of him. This is part of what feels so necessary about the movie, at least the illusion of personal stakes within the style—the sense that he’s allowing us the intimacy of finding him floundering around in the story he’s telling, not just lording over it. Here is a character as put together as the costume design and art direction, who seems in collaboration with, even in passionate defense of, the aesthetic, as opposed to merely inhabiting it. 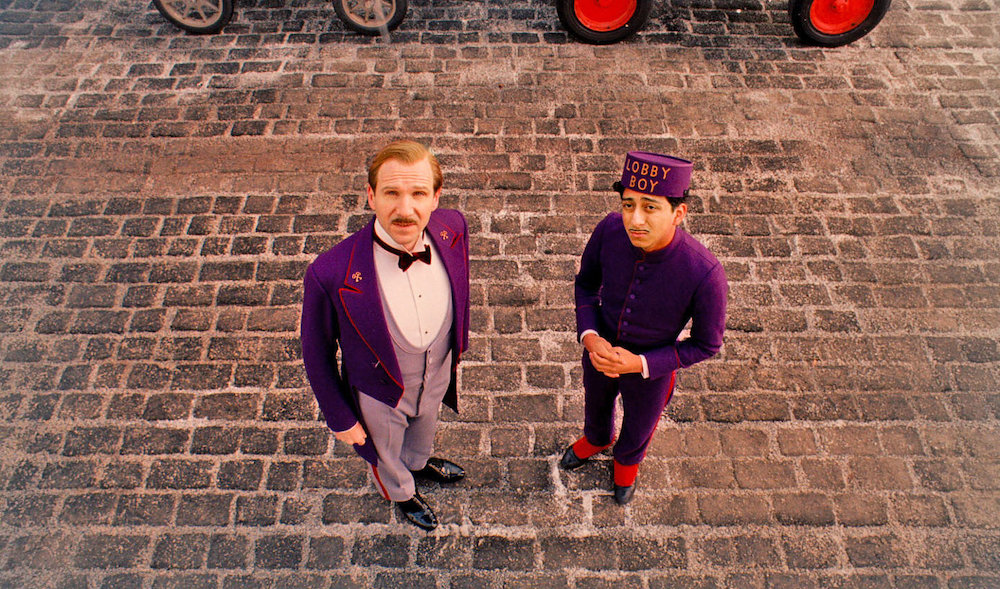 Anderson’s movies often contain dolly shots where a character walks us through the rooms of the world created, but in this one our protagonist notices the details, spiffs them up along the way, serves as a comedic foil in the intensity of emotion he reserves only for things like an off-kilter hat. It’s all Gustave and his protégé Zero, a young refugee enthralled by the same vision, want to care about, along with Zero’s love story with a girl named Agatha, which Gustave treats with sweet, preposterous paternal pride. But the world presses in. Their immaculate haven is quite literally under siege, and they seem to care less about the danger than the beauty that will be lost. It’s an impulse that is maddening and maybe pointless, but also maybe noble. Full of mess and humanity. It’s hard not to think of another wonky masterpiece of beauty set against the backdrop of anti-beauty: Cabaret. All Sally Bowles cares about is her voice and that people get to hear it, and that voice is miraculous and loud to the end, even as Nazis creep into the Kit Kat.

The plot moves—Gustave is framed for murder, there’s the fight over the inheritance of a priceless painting, the Grand Budapest is overtaken and converted into army barracks. Through it all, Gustave remains the perfect Andersonian lead—blinkered and judgy in often hilarious ways; he never abandons his superficial obsessions, even when he should, even when he could flee but instead sits still in his plush elevator, offering cold comfort to his guest/patron/lover with a nonsensical poem.

In the end, he’s shot saving Zero, and Agatha is killed as well, and all that’s left is the hotel and Zero as its owner, now an old, lonely man who used all his money to purchase it—the movie’s set lives on beyond any characters who might inhabit it, its beauty faded without them. The narrative leaves us in the most extreme version of the feeling that Anderson gets at better than almost anyone—this sense that you’re not sure how moved you are, or should be. Was this all a joke? Did this mean as much as it feels like maybe it did? What was the point? Hard to say, but you feel it, watching something that insists on its own beauty even without a clear reason.

Back in the elevator at the end, the elder Zero says of Gustave: I think his world had vanished long before he ever entered it. But I will say: He certainly sustained the illusion with a marvelous grace. As is always the case with Anderson, you can read grandiosity and pretentiousness here. But that’s assuming that the point is claiming the importance of his vision. As though he’s not always winking at the delusion of his project or worrying that it doesn’t, maybe shouldn’t, matter to anyone else. Zero says the line with a sad, wry grin—still elliptical, still coy. But, yes, full of marvelous grace.

Lucas Mann was born in New York City and received his MFA from the University of Iowa. He is the author of Lord Fear and Class A: Baseball in the Middle of Everywhere. His latest book, Captive Audience, will be published in the US by Vintage in May 2018. His essays have appeared in Guernica, BuzzFeed, Slate, and The Kenyon Review, among others. He teaches creative writing at the University of Massachusetts, Dartmouth and lives in Providence, Rhode Island with his wife. 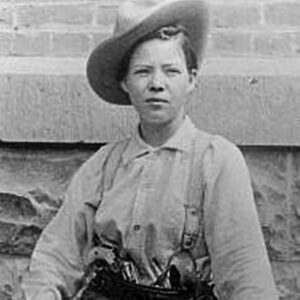 The True Story of Pearl Hart, Straight-Shooting, Poetry-Writing Woman Bandit Pearl Hart stroked her pet wildcat as she leaned back on the bunk in her cell in the courthouse in Tucson, Arizona Territory....
© LitHub
Back to top
Loading Comments...