In Praise of the Worker-Owned Company (OR: What to Do About Simon and Schuster)

Nick Fuller Googins Has a Few Suggestions For Corporate Publishing

Well, Simon & Schuster is not going to be sold, for now. A federal judge ruled in October that Penguin Random House couldn’t buy the publisher, and since then, Simon & Schuster’s parent company has decided against mounting an appeal. That said, the future of America’s third-largest publisher still remains uncertain. Simon & Schuster’s owner seems intent on selling, with potential buyers reportedly including HarperCollins, Hachette Book Group, or—gulp—an unnamed private equity firm. As a new author with Atria Books (a Simon & Schuster imprint) none of these options seem especially great. What will happen to Atria? To my wonderful editor? My first book?

Following mergers between major publishing houses in the past, corporate executives have cut jobs, folded imprints, and canceled author contracts. My novel is scheduled to debut next August. My wonderful editor assures me that things will be fine, and I trust him. He is, after all, wonderful. Unfortunately, these kinds of things aren’t up to him. Even the most wonderful editors get no say when it comes to major decisions regarding the future of the “Big Five” publishing houses.

In publishing, as with far too many industries, democracy is all but absent in the workplace. The people who do the day-to-day work of running Simon & Schuster—the editors, marketers, publicists, cover artists, copyeditors, accountants, and so on—don’t get a vote on whether their company should be sold, or to whom. We tend to think of this structure as the natural capitalist order—employees do the work, corporate executives and investors call the shots—but it doesn’t need to be this way.

Our nation’s third-largest publisher doesn’t have to be owned by a mass media conglomerate or a private equity firm. There exists another option, one that would bring much-needed democracy to publishing by putting decision-making power into the hands of the very people who know books best: let the employees of Simon & Schuster purchase Simon & Schuster. They do the work, after all. Let them own their company. Let them call the damn shots.

Worker-owned cooperatives are so rare in America that it’s difficult for us to imagine the sense of pride and ownership that comes when we work for ourselves, participating actively in major company decisions, sharing equally in profits and losses.

But the idea of employees buying and running their own company—even here in America, even in publishing—isn’t as utopian as it sounds: the workforce of WW Norton has successfully owned and managed the venerable publishing house since shortly after World War II, when Mary Norton sold her stock to the company’s editors and managers. They drew up a Joint Stockholders Agreement that still remains in effect, allowing active Norton employees to elect leadership, participate in decisions affecting the company’s future, and share profits. Anyone who leaves Norton must sell back their shares, ensuring that no outside market exists for ownership of the company. There is no risk of a hostile takeover, no fear of an unexpected sale. The employees are free and independent to do what they have done so well for decades: publish kickass books, from classics like the Feminine Mystique and Clockwork Orange to newly released knockouts like The Immortal King Rao and Activities of Daily Living.

Worker-owned cooperatives are so rare in America that it’s difficult for us to imagine the sense of pride and ownership that comes when we work for ourselves.

By comparison, four of the Big Five publishing houses are subsidiaries of global media conglomerates which are, in turn, majority-owned by four billionaire families from Germany, Australia, and the United States. (Hachette Books, the outlier, is a subsidiary of a global media conglomerate that is minority-owned by a billionaire family). Simon & Schuster is owned by Paramount Global, which is operated and owned by a private “mass media holding company” called National Amusements, which is based in Massachusetts and owned by the billionaire Redstone family. Paramount Global, in an official 2020 press release, gave three reasons for selling the “non-core asset” that we writers and readers refer to as Simon & Schuster:

But Simon & Schuster, with approximately 1,500 employees, is a far larger company than WW Norton. Could America’s third-largest publisher seriously operate as a cooperative? For inspiration, let’s zip across the Atlantic; the Mondragon Corporation, founded in Spain in the 1950s, is a federation of over 200 cooperatives and organizations that together employ over 80,000 people who collectively own and manage every aspect of their many businesses.

From international finance to heavy manufacturing to science and retail, Mondragon cooperatives operate on five continents and comprise the most enduring example of successful cooperative enterprise in human history. If the workers of Mondragon can coordinate across so many varied industries all around the world, surely the employees of Simon & Schuster can take care of business on their own.

Assuming Simon & Schuster employees wanted to buy their company, how would the sale actually go down? Would Paramount Global (…via National Amusements… via the Redstone Family) even allow it? The easiest path forward would be political, via a “Right to Own” policy as first promoted by the UK Labour Party, and later echoed by presidential candidate Bernie Sanders (Bernie called his version the “Right of First Refusal”). Such a policy would legally give employees the first option to purchase their company if it is being sold or about to go public. Before Paramount Global could have opened the bidding for Simon & Schuster, for example, it would have been required to first offer the company to its employees.

But what about cost? Penguin Random House offered to drop $2.2 billion on Simon & Schuster. Where would a bunch of editors, publicists, and designers come up with that kind of cash? A “US Employee Ownership Bank,” also proposed by Bernie in 2020, would’ve existed specifically to provide low-interest funds to workers seeking to buy their businesses and run them as cooperatives.

Current politics being what they are, however, the most likely path toward employee-ownership of Simon & Schuster would not come from the government, but from a series of outside loans, possibly from some combination of credit unions, Amalgamated Bank (the largest union-owned bank in the nation), or even from readers (imagine the largest Kickstarter in history, with some seriously epic S&S swag for readers who chip in). Or, to think even more creatively, in a move that could dramatically change American publishing, what if Simon & Schuster were owned cooperatively not only by the people who publish books, but also by the people who write them?

Stephen King, who traveled to Washington last summer to publicly testify against the proposed merger with Penguin Random House, is one of Simon & Schuster’s most famous and profitable authors. Imagine King’s rockstar power combined with a few dozen of Simon & Schuster’s biggest authors who, like King, aren’t eager to see their publishing house change hands from one billionaire family to another. Now imagine this group splitting the $2.2 billion bill with Simon & Schuster’s employees, buying the company to own and operate as a cooperative, together.

A publishing house owned—even in part—by the authors it publishes might seem like a conflict, but Hollywood has long functioned in this model, with popular actors not only owning their production companies, but starring in their films as well (Reese Witherspoon’s Hello Sunshine for instance, or Leonardo DiCaprio’s Appian Way). A similar joint venture in publishing might lead to conflicts of interest, sure, but it could just as easily lead to exciting new possibilities that we have yet to imagine.

In my upcoming novel, The Great Transition, humanity has rallied to overcome the worst of the climate crisis and, in the process, transformed society into one almost universally managed by worker-owned cooperatives along the lines of Mondragon. Ray Bradbury, when asked why he wrote bleak dystopias, reportedly said something like “I write dystopia to know what future to prevent.”

For similar, if opposite reasons, those of us who write utopia do so with an idea of the future we want—the realms of the possible that we can strive to expand. As author and Catholic Worker Dorothy Day put it, “We are not expecting Utopia here on this earth. But God meant things to be much easier than we have made them.” Utopia would be great, but I’m not expecting it either. I just want the people who know books best to have some say in what happens to our country’s most important publishing houses. That should not be asking for a lot.

Nick Fuller Googins is the author of the novel, The Great Transition, a climate crisis utopia forthcoming in 2023 from Atria Books. His short fiction and essays have appeared in The Paris Review, The Sun, The Los Angeles Times, The Southern Review, and elsewhere. When not writing, he is teaching fourth-grade or preparing for his after-school Dungeons & Dragons class. He is a graduate of the Rutgers-Newark MFA program and recipient of a fellowship at the Hawthornden Castle International Retreat for Writers.

When Chekhov Became Chekhov: How the Son of a Serf Became a Literary Genius 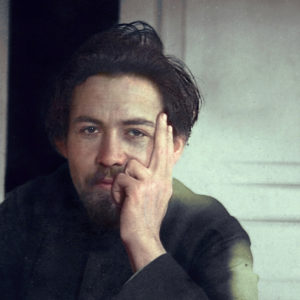 When Chekhov Became Chekhov: How the Son of a Serf Became a Literary Genius Hosted by Andrew Keen, Keen On features conversations with some of the world’s leading thinkers and writers about the economic,...
© LitHub
Back to top