In Praise of the Mighty Zine

Live, from the LA Zine Fest

Early Sunday morning at downtown Los Angeles’s The Last Bookstore, with coffee in hand, I began coordinating the setup for the fifth annual LA Zine Fest’s panels and readings. Tables were moved to make room for folding chairs; the projector, music stand, microphones and armchairs were placed near the stage for quick switch outs. We were ready by the time the store opened and I texted a picture of the setup to Rhea, one of the LA Zine Fest organizers. She replied with a smiley face.

We had been planning for several weeks. The Last Bookstore would host the official panels and readings. LA Zine Fest itself would be held two blocks south at The Majestic, a great big airy building with lots of natural light and brilliant chandeliers, making it look more ready for a waltz than a one-day destination for thousands of zinesters.

This was the first year I wasn’t tabling. After five years of working together on Dum Dum Zine I parted ways last spring with Taleen, my long-time collaborator. It was a hard decision, and it made this year’s Fest a bit sad. It was strange not to be part of what is affectionately know as “Zine Season,” a week of events starting with a kickoff party usually hosted by Dum Dum Zine. This year Dum Dum threw the party without me, but invited me to read, which I did. At the show I saw that Taleen had redesigned the Dum Dum logo and made new merchandise.

Throughout the week there were zine events around the city: workshops at the Craft and Folk Art Museum and Pop Hop, readings at Avenue 50 Studio and Book Show, parties at various galleries around town. Don’t underestimate the power of the zine; this year there were over 200 exhibitors and an expected 6,000-plus attendees. Places like Pizzanista and Café Gratitude donated food for volunteers and the organizers.

In the past, the night before LA Zine Fest was filled with cheap red wine and room temperature beer. Our little Dum family, adding final touches to our zine: my husband handwriting labels, our poetry editor making buttons, Taleen and I folding and stitching and numbering. This year the night before Zine Fest I rubbed tiger balm on my sore back and decided which shoes would best carry me through a day of running from the bookstore to The Majestic.

But not tabling gave me a chance to observe. When I entered The Majestic somebody brushed past me burning a sage smudge stick. Tables were jam-packed with those authentic punk zines, the kind photocopied at Kinkos, stapled precariously, an array in bright colors. But there is no one way to make a zine. Some were humorous, like oh gosh press’s The Baby Sitters Club, a printed and stapled neon colored pamphlet of lesbian fan fiction inspired by the girlhood classic. Some were informational like Red Cat Press’s How To series, including one on how to quickly trim your marijuana. Of course there were those handcrafted beauties like mutedtalks’s handmade journals, Asuka Ohsawa’s letterpress zines, or the hand stitched miniature zines Zoe Ruiz brought for the Writ Large Press table.

Some were a call to arms. The panel Racial Disparity and the Plight of the African American Female: zine reading and discussion was slated for a 30-minute presentation but turned into a passionate, hour-long debate about black civil rights—about Ferguson and Detroit, the realities of the African American diaspora. When an audience member asked the panelists if they thought physical violence was their strongest and perhaps only weapon in these fraught times the answer caused a bookstore nearly at capacity to hush. Uhura Moor and Sarah Gail, both panelists, professed they were about love. Violence, they said, was in their art. They considered making art, making zines as one of their strongest defenses.

At another panel, which discussed DIY publishing as feminist resistance, Yeskia Salgado told an audience of about a hundred that she believes the publishing industry would never accept her as she is, a heavyset Latina and high school drop out. She makes and distributes her poetry zines as a way to take back her voice, to have her voice be heard.

DSTLarts, a non-profit organization committed to teaching their students not just how to write a poem or make a chapbook, but also how to sell and manage the profits, hosted a reading at the bookstore. One student, a quiet girl with her hair covering her face, almost too short to reach the microphone, read a poem about aging. Her grandfather was a vegetable (her word, not mine), tubes coming out of his mouth and nose, and she spent an afternoon with him, tracing the lines of his face, wondering what her face would look like at that age. Their poems and stories were printed and bound in a colorful chapbook, available for $5.

My own efforts with a zine came from these same frustrations—from needing to express myself and not having the platform to do so. I remember graduating with an undergraduate degree in English from UCLA and being at a loss for what to do next. In a gchat conversation with Taleen, who was in graduate school in Chicago at the time, I suggested we do it ourselves. And we did. Dum Dum Zine became her graduate project and when she moved back to Los Angeles we worked on it together. We took submissions through Submittable, collaborated with well-known artists, with up-and-coming graphic designers. Each issue took on a different format—a broadside, a cd, a fluxus kit, a journal and a postcard book.

But after the release of our fifth issue something happened. It was around that time an undergraduate zine associated with UCLA asked to host a release party at The Last Bookstore. I said yes, of course, partly because it’s my job, but also because of how excited they were about their second issue. They told me almost breathlessly that they had purchased a button maker. They’d be able to make buttons! It was how young they looked—with their fresh-faced naiveté, their eagerness, what I could swear now was baby fat in their cheeks, and it was also their enthusiasm, unabashed, so sure of itself. It embarrassed me because I hadn’t felt that in a long time. They showed me their zine, told me how wonderful it was to write something and publish it nearly in the same week.

Recently I had an essay published in a quarterly journal, and from acceptance to publication it had taken almost a year. Before it went to print I changed a date from 2014 to 2015 just so it wouldn’t read outdated. Which is fine if that’s what you want. The zine however is its antithesis. There is no waiting for agents, no waiting for editors or that call back. You don’t need an MFA to make a zine. All you need is a stapler, a pen and some paper. Not one of those two hundred plus exhibitors were waiting for their artistic voice to resonate in the community, they were out there, making it happen themselves. The time is now, and the zinesters feel it.

In between panels I made my way back to the Majestic. There were the youngsters, eagerly trading zines with each other, looking forward to their next collaboration, but there were also the more seasoned zinesters, like those over at Razorcake or KXLU. It seems there is no wrong way to be a zinester. The community welcomes you to learn from it and move on, as I have, or it can span a person’s creative career. On the way out I stopped by Dum Dum Zine’s table, squeezed my friend’s hand and accepted a pin with the new Dum Dum logo, pinning it to my dress pocket.

The Time I Played Catch with Annie Dillard 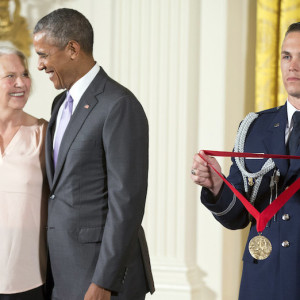 A passage from An American Childhood ends with the characteristically brilliant image of a woman diving into water, becoming...
© LitHub
Back to top
Loading Comments...