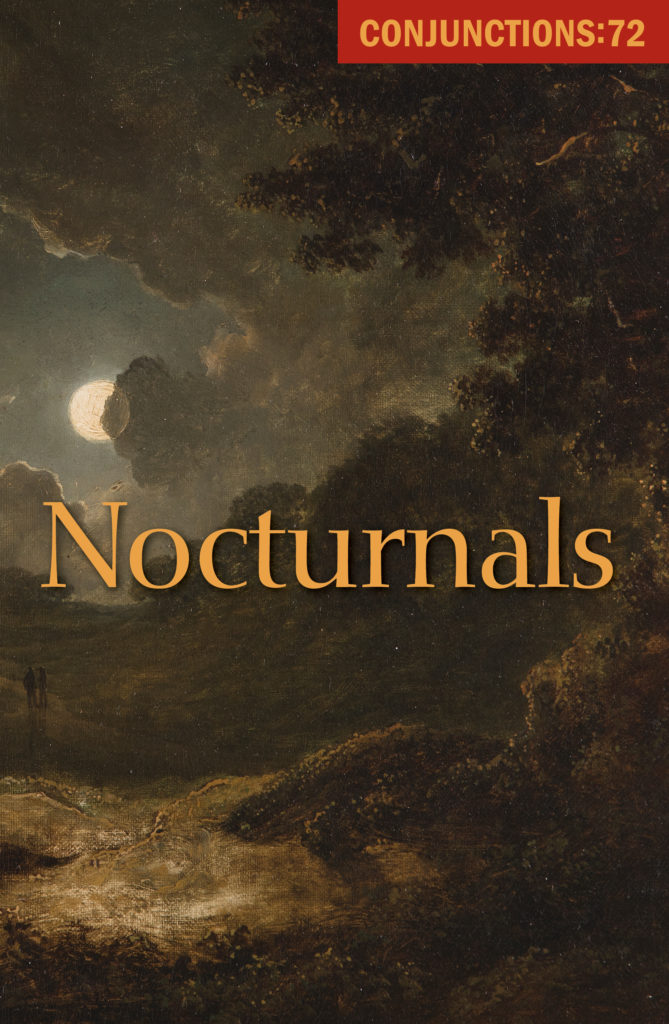 The following is Brian Evenson's story from Conjunctions:72. Brian Evenson is a Conjunctions contributing editor and the author of more than a dozen books of fiction, including The Warren, Immobility, A Collapse of Horses, Windeye, and Song for the Unraveling of the World. He teaches at CalArts and lives in Los Angeles.

He heard a buzzing in his head that he took at first to be a dream, but of course he no longer could dream. What was it then? Was it in his head after all?

He called up his familiar. Almost immediately, the noise stopped.

What was that sound? he wondered. Though he had not spoken aloud, the familiar read the flexion of his jaw and determined the likely words, and then he felt it rummaging lightly about within his memories until it had hold of what the sound had been to him.

Nothing to worry about, it responded. He heard nothing, but still felt the words form in his head. These are merely the noises of the body, misheard. Similar to other noises you have asked about before.

I didn’t used to hear them.

Because you used to be someone else.

When he did not reply, after a moment the familiar offered: Let me manage putting you to sleep and waking you again. I shall make sure you won’t need to worry about any sounds.

No, he mouthed. And, when he sensed it mustering evidence for why this would be best for everyone: “No!”

It was a shock to hear his own voice aloud, at night, alone, in the dark.

He submerged the familiar again, down to where he wouldn’t have to be consciously aware of it. He knew where to find it if he needed it. It would always be there, until he was dead.

He lay staring up into the dark.

One day, he worried, the familiar would simply take charge of his sleep whether he had requested that it do so or not. Surely it had pro- grams and protocols that would activate if, one night, he was too anxious or too panicked or just seemed otherwise not right in some measurable way. Perhaps that night was tonight.

Yet, another part of him thought, why not let it put him to sleep? It could do so instantly, and could awaken him instantly as well. It could, so it had informed him, regulate his sleep cycle with an exactitude calibrated for maximum benefit. Conveniences such as these were among the few things he had gained from having the familiar wedged into his brain, though they were next to nothing compared to what he had lost.

No, he couldn’t trust it, even if it was part of him now.

He felt it fluttering upward.

Feeling paranoid? the familiar asked. Would you care to be soothed?

He ignored it. After a time, he felt it sink down again, but of course it was never quite gone.

After a while, he gave up on falling back to sleep. He got up. He did not turn on the light because of the others sleeping in the house. Besides, it did not matter: the familiar was expert at helping his brain make the most of whatever limited visual input his eyes received from the darkness. It was nothing like seeing in daylight, but it was enough.

The tile floor was cool beneath his feet. The familiar began to rise to inform him of precisely how cool, but he tamped it down. There was no advantage in knowing so much about the world around him. He padded barefoot across the tile, exactly sixty-five degrees, then over the wool rug, then over the tile floor again.

In the hall, near the foot of the stairs, he hesitated. He had been intending to go to the living room and find his tablet and read in the dark, but he wasn’t sure anymore.

I can read to you, the familiar said. Can even project the words before you if you so desire. You don’t need a tablet. You only need me.

He hadn’t felt it rise, but there it was, insisting on being heard.

No, he told it. I’ve changed my mind.

He climbed the stairs. He traveled from bedroom to bedroom as silently as he could. He opened a door and stepped in, regarding the dim shape in the bed and listening to it breathe. The shape was positioned just right, the face exposed to the moonlight streaming through the window, and he could see the flutter of eyes moving quickly under lids. A little envious, he wondered what the dreams concerned.

Or at least he thought he could see the eyes moving beneath the lids. Maybe this was just his familiar extracting data from the darkness and modifying it according to his wishes, filtering it, showing him what it thought he desired to see.

He went through all four bedrooms, regarding the sleeping bodies. He stayed in the last room the longest, hesitating, not because it had anyone special in it but because it was the last room. My progeny, he thought, and tried and failed to feel anything. Then thought, Why call them that? Why not offspring or descendants or simply children?

Though children wasn’t the right word either, since he was so different from them now. Almost as if he and they were two different species. They did not experience the same world as he.

He had been told the repurposing of the brain was safe. Research shows you only use a certain percentage of your brain, the researchers had reasoned, and the brain is remarkably plastic and capable of shifting a giving function from one area to another, particularly in the case of someone as young as you. And so they had installed the familiar, threading it in and through his brain tissue, meticulously programming how it would grow and when said growth would stop. They would be careful, they told him, to leave intact any nuclei that showed potential for significant activity. Really it hardly touches the brain at all. And then, later, afterward, they kept claiming that it should have worked, even though it did not. That the flaw, if there was a flaw, must have been with him.

Now, years later, experts had come to the conclusion they should have come to from the outset: there were no unused portions of the brain. Which meant that in installing his familiar they had irrevocably damaged the cells that governed his ability to dream. And his emotions had been blunted too, muted in the way they often were with, just to give one example, psychopaths.

In the bed the shape moaned, rolled over slightly, then settled again. He moved slowly out of the room, pulling the door softly closed behind him.

After that initial test group he had been part of, the procedure had been abandoned. They had gone back to external augmentation, working to improve it. Tomorrow, his progeny would awaken and affix their augments like crowns around their heads and would, for the remainder of their waking hours, operate with great efficiency, pretending to not be human. He of course did the same, the only difference being that he could never stop pretending. They came home and removed their crowns, became human again, slept, dreamed. Not he. His crown was under the skin. He was no longer human.

Slowly, surely, he made his way back to the landing and then down the stairs, his palm sliding lightly along the banister on the way down. Could he sleep now? Maybe, at least until his head started buzzing again. Would it?

I could—his familiar started to say, but he quickly cut it off.

Not now, he said. Please.

He took another step down but he was already at the bottom of the staircase. The shock of suddenly finding floor where he’d expected air made pain shoot through his leg. How had he missed that? Why hadn’t he understood he had already arrived?

Perhaps he had been distracted. Perhaps it was as simple as that, he tried to tell himself. Unless—

No unless, said the familiar, its voice the barest whisper. No need to worry about it at all.

He opened the door to his room, and was shocked, momentarily, to see a figure there. In the bed, sleeping, its face turned in such a way that he could not clearly read it. But then, as he approached, he saw that it was him, that he was looking at himself. And then, a moment later, that what he had thought to be himself was in fact nothing at all: rumpled bedclothes, nothing but sheets, one blanket, a half-folded pillow.

He reached out and touched the bed. The sheets were cold.

Was someone else here? he wondered.

Other than me? the familiar asked.

You should try to sleep, the familiar advised. You’ve already let most of the night get away from you.

He stayed there beside the bed, hesitating. And then, despite still being very far from sleep, not knowing what else to do, not wanting to provoke it, he climbed in.

That strange, almost fluttering sensation from deep within his mind, a sort of mental arrhythmia. It rose, it rose.

I could simulate dreams for you, it offered.

You’ve been listening in.

Of course I have, it said. I always am.

You always are, he acknowledged.

I could simulate them for you, it said again. They would be very well done. You wouldn’t know the difference.

That was what frightened him, that perhaps he wouldn’t know the difference. Perhaps the house was empty except for him. Perhaps he didn’t have any progeny. Perhaps progeny was in fact a word foisted onto him by the familiar and he was dreaming now. Or not dreaming exactly but experiencing the familiar’s version of what it believed a dream to be.

He tried to keep these thoughts fleeting, fugitive. He tried not to let any of them cohere into something the familiar would understand and act upon.

What else could you simulate? he thought carefully at it.

Why, anything, the familiar said. I can help you experience absolutely anything at all. What would you like?

He tried not to say or think anything. He closed his eyes and tried to relax the tension in his jaw. He breathed in a way he hoped would slow the beating of his heart, make him read to the familiar as relaxed, at ease.

But it was not fooled. It never was.

What can I do? it asked, the words painted fluidly on the walls of his skull. And then, with a terrifying sympathy, Poor, poor thing. How shall we make you better?

From Conjunctions:72, Nocturnals. Used with permission of Conjunctions. Copyright © 2019 by Brian Evenson.

My White Whale Was a 50-Pound Fish in Martha's Vineyard 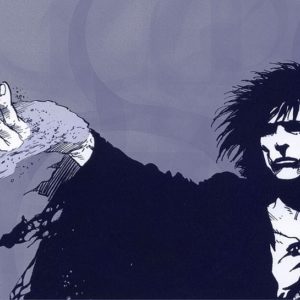 Re-Enter Sandman: Neil Gaiman's beloved series will finally be a (very expensive) Netflix show For real this time, folks. Yes, more than three years after New Line dashed the hopes of millions by trying and failing...
© LitHub
Back to top