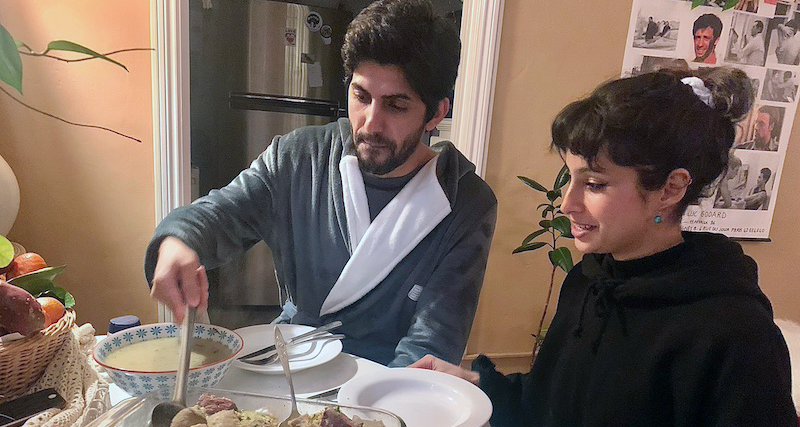 Photojournalist Jehad al-Saftawi invited me over to his apartment one evening for dinner. It was a chance invitation. I happened to be visiting the Bay Area that week on business, wandering the city on my last day in town, when I texted him to see if he’d like to meet up for coffee. But instead of gathering at a cafe, he insisted I join him and his wife, photojournalist Lara Aburamadan, for a special meal they were preparing—a recreation of their favorite childhood dish—a traditional Gazan version of tripe (stuffed cow’s stomach).

They hadn’t eaten it since they left their home about five years ago and this was their first attempt at making it, the way they remembered their parents had so many times before. I’d tried the largely undesirable delicacy growing up, an Italian-influenced version, but I wasn’t a fan. Jehad was an author I worked with at McSweeney’s, and I wanted to show my respect, so of course I said yes.

I walked from the BART to their apartment in Berkeley, where they’ve been living since shortly after arriving in the United States five years ago to seek asylum. Their space was modest yet tasteful, with art and photographs along the walls. Jehad’s own book laid under their coffee table. Lara was busy in the kitchen, sewing up the stomachs by hand after having stuffed them with rice, vegetables, beef, and a variety of spices. The day before, she and Jehad had spent three hours scraping the outer layer of the stomach, learning the technique from a YouTube video as a home cook showed how easy it was to clean the tough texture using only the blade of a knife in a matter of seconds. Their own efforts took a little longer—hours, in fact.

“Is that how your mothers did it back in Gaza?” I queried.

“No, they hadn’t cleaned the tripe in front of us before,” Jehad replied. “They always had the skin removed. It’s not something you buy with the skin, as we found it here.”

Once the stomachs were cleaned, stuffing them with balanced amounts of ingredients took careful preparation. I witnessed chopped mounds of varying colors and textures, all being mixed together at once.

“Hold on, I’ll write the order for you,” Jehad said enthusiastically, as if I was going to try my hand at this meal back home in Miami. Still, I was honored he wanted to pass along his and Lara’s treasured recipe:

Combine the following ingredients and insert into the empty stomachs:

Sew the stomachs shut then add them to the stew.

After it finishes cooking, put three minced garlic cloves in the stew along with half a spoon of cumin.

I loved how exact measurements weren’t used. I was raised to help out my mom and grandma in the kitchen, where measuring spoons were also rarely used. “It’s all about the feel,” Grandma Elsie would often say. Though I acknowledged TV chefs and cookbook authors who claimed they had scientifically perfected dishes down to the grain and droplet, I knew calculations couldn’t replace those imperfect human elements that comprise the soul of a dish. 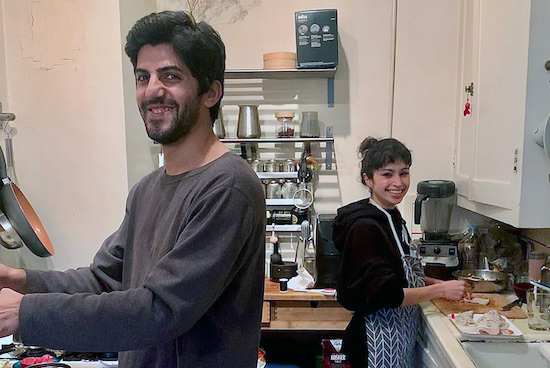 Once packed to their limits, Lara closed each organ back up using a needle and thread before delicately dropping each one into the pot to slow boil. Meanwhile, Jehad heated a kettle on the stovetop as he fixed me a cup of za’atar tea. The various fragrances wafting through the kitchen, now steaming up the walls and through a half-open window, already smelled delicious.

Cutting into the tripe, I felt like I was parting curtains, peeking into a window of their former lives.

While the mound of upholstered tripe sat atop the stove, slowly cooking in a bath of seasoned stew, we relaxed on their couch with our tea and chatted: about life, politics, religion, humanity, family, love, art, spirituality, weather. They regaled me with stories of their life back in Gaza. It hadn’t all been terrible—they reminisced about the loving families who’d raised them and had to leave behind. They pulled out an album they hadn’t flipped through in years: photographs from their wedding back in Gaza.

They looked as adorable and elated as any two newlyweds, no different than weddings I had attended as I grew up in the tri-state area. Jehad and Lara left not too long after that memorable day and told me they tried not to look back too often; when they did, the heartache and longing for their parents and siblings was evident in their faces. But they chose to leave. They had to. It was becoming too dangerous for their work as photojournalists documenting their own survival.

Lara also showed me some of her personal paintings and notebook sketches. Some were made during the pandemic, others while traveling on trains and buses. They were vibrant and dark, raw and imaginative; visual portrayals of her own journey, infused with all the emotions she carried inside her. 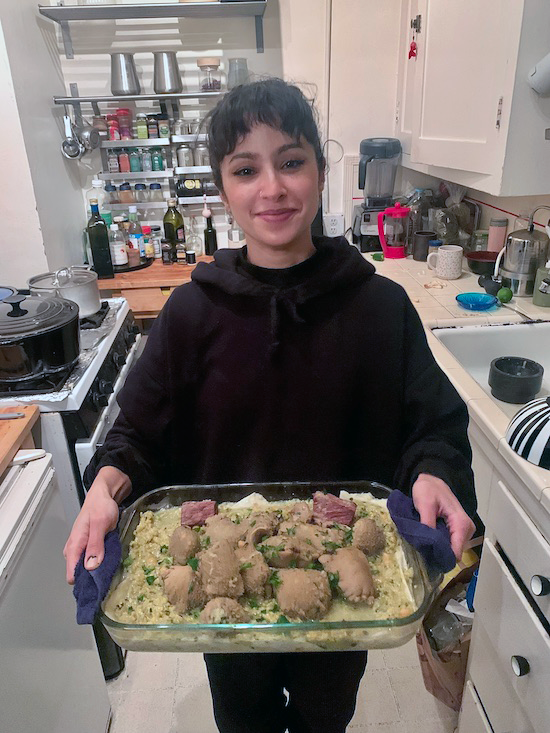 Jehad explained how, once he arrived in the U.S. and began the process of recovering from the trauma he had suffered in Gaza, he had stopped taking pictures. It wasn’t until his photographs caught the attention of McSweeney’s, whose mission is to publish books that spotlight underrepresented and lesser-known storytellers and fell in love with his work. When his book, My Gaza: A City in Photographs, was published in fall 2020, he explained to me that its release was like a healing process, finally prompting him to share his work and write about his experience. Some praised his efforts to capture his homeland while others expressed their disapproval for his criticism. It didn’t matter. He remained strong.

After a couple of hours, we finally sat down to the meal they had worked two days to make. I was honored to sit beside them as they tasted a piece of their heritage for the first time in half a decade.

Cutting into the tripe, I felt like I was parting curtains, peeking into a window of their former lives. The skin was tough—difficult to slice open—but once I broke through, the scents of cardamom, cumin, black pepper, and ghee coated my face in a burst of hot mist. I looked over to them as they both smiled, content, diving into their plates, remembering just who they were and the path of their journey.

Beginning in March, Jehad and Lara’s photography and artwork will be on display for a special exhibition, Refugee Eye, on view at 849 Valencia Street in San Francisco.
cookingfoodGazaJehad al-SaftawiMy GazaRaj Tawney
Share:

Raj Tawney writes about race, food and culture from his multiracial American perspective. He is currently working on a book centered around his identity. He also promotes authors from all walks of life. Find him at rajtawney.com

Peter Ho Davies on Encouraging Readers to Read Between the Lines 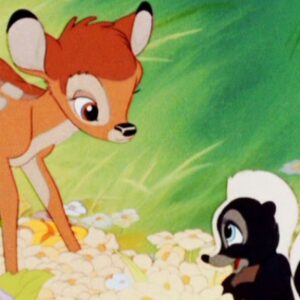 One of the reasons Felix Salten had become famous was the translation of Bambi into English in 1928 by the American writer...
© LitHub
Back to top
Loading Comments...