Imran Siddiquee on the Problem with “New Masculinity”

On Lindy West, Pharrell Wiilliams, and How to Be a Male Ally

The cover of GQ’s November issue features a striking photo of singer-rapper-producer Pharrell Wiilliams wearing a flowing yellow coat (or is it a gown?) under the title “The New Masculinity.” In an interview inside, accompanied by more photos of Pharrell dressed to the nines, at times sitting with flowers or with tears on his face, the prolific artist owns up to the objectification of women in his prior work—he understands now why “Blurred Lines” was once called “rapey”—celebrates the fluidity of his fashion sense, and names the “racial” element commonly overlooked in discussions of American manhood.

It’s a fascinating, surprising conversation. Yet, while Williams and GQ’s editor-in-chief Will Welch nudge the edges of binary thinking in the interview, ultimately neither is willing to push beyond its borders. Welch espouses something he calls the “divine masculine” and Pharrell still sets gendered limits on his own fashion choices (skirts and blouses are not his “deal”). He’s “not an activist” intent on building a non-binary future, after all.

The hazy destination of this nearly-bold discussion reflects how easily discussions of masculinity can drift back to a more familiar path, even amidst the growing awareness of the toxic elements of American manhood. Lindy West’s latest collection of essays, The Witches Are Coming, provides a lens for understanding this kind of holdup. The book is a call to truth for those fed up with the obfuscating of thin white able-bodied men at the top. At turns hilarious and poignant, West calls for Democrats to stop pandering to those on the fence in this Trumpian moment and instead speak the truth about what is happening and has happened to the most vulnerable amongst us, which includes naming systemic sexism, racism, and the fact that change requires those in power to give some of it up. And yet, in its own attempt to paint a rallying us vs. them picture, where the Republican agenda is a clearly distinct enemy, the collection itself stops short of interrupting certain foundational narratives—including the one around masculinity, which leaves space for some borders to reassert themselves.

The Shrill author writes, “white men get to be their own mythmakers” in this country, referencing how the likes of Harvey Weinstein and Donald Trump managed to attain power. It’s not just that Trump approaches his job as president as if he were showrunning a season of The Apprentice, but that his oath to domination is informed by a widespread worship of wealthy white masculinity. West describes him as “rape culture’s blathering id” and a reality TV star for whom “reality doesn’t dictate the script; the script dictates reality.” Men like Trump are on heroes’ journeys to power; a story where pushing down others and everything that is deemed “weak” is justified as necessary to obtain (and prove) manhood.

But their success is predicated on obscuring that well-maintained path, casting themselves as underdogs, and enforcing the silence of those around them. The first essay in West’s collection, “They Let You Do It,” shines a light on this ruse and is named after Trump’s words to Billy Bush on the infamous Access Hollywood tape. As the writer suggests, this phrase undergirds much of Trump’s defense against the nearly two-dozen accusations of sexual assault he currently faces. Even his “denials” imply that had he done what so many women say he did, it would actually be their fault since they supposedly didn’t resist. Like police officers who successfully defend themselves after being taped shooting and killing Black children like Tamir Rice, it’s not only a denial, but its own accusation against the survivors and witnesses.

What Trump understands is that in a white supremacist patriarchal society, it’s not enough to reject accountability for harm but, to stick to the script, one must show dominance within the denial. The “they” in the title of West’s essay, then, takes on other meanings. Just think of Brett Kavanaugh’s use of “beer,” “baseball,” and other allusions to traditional American manhood in daring the (mostly white) men in Congress to stop him from assuming his Supreme Court throne—as they interrogated him about his alleged assault of Christine Blasey Ford. Or the millionaire creators of South Park, Trey Parker and Matt Stone, who, West points out in a later essay, have spent their careers responding to critiques of racism, sexism, and other forms of demeaning humor by claiming neutrality and aggressively dehumanizing their critics on TV—only to be given “free speech” awards by progressive groups like the People for the American Way.

Those at the top have learned to exploit their power by implicating others in the harm they cause and conjuring the image of a war in which powerful people must pick a side. In that way, West points out, a documented example of racism can become a conversation not about centuries of white supremacy in this country, but rather the annoying rise of “political correctness.” In the cultural upheaval sparked by Tarana Burke and so many survivors of sexual violence saying “me too,” this manifests most frequently through fears of social isolation—being “cancelled.” West writes:

Almost as soon as powerful men began falling to the truth (and by ‘falling’ I mean ‘having to say sorry and retreat to their mansions for a few months before booking sold-out comeback tours’), other men began just asking questions about redemption, about forgiveness, about when reckoning goes too far and turns into a witch hunt.

The writer responds by claiming the titular role in that myth, writing “we are witches, and we are hunting you.” Trump’s team once dismissed the Access Hollywood tape by implying that this was just the way men speak, and that if he was brought down we’d have to bring down every man, in every gym in the country. Thousands upon thousands of women and others started to share their stories and called their bluff: yes, you are all implicated.

Yet, even as she writes powerfully about the mediocrity of famous white men like Adam Sandler and Ted Bundy, West hesitates to completely unpack that implication. In “Gear Swap,” she instead finds hope in an online forum where a group of mostly men, including her husband (musician Ahamefule J. Oluo), buy and trade audio equipment. After some of the white members decide to start giving discounts based on gender and race, some other white men in the group become enraged, but the moderators take the side of the discounters, ultimately pushing the noxious members out of the group. West draws a link to how Twitter and Facebook might handle the hate speech of people like Trump on their platforms, but also sees it as a model for white men looking to be better allies. The writer whittles it down to a single question for these men: “Do you ever stick up for me?” But in detailing all the things they must be willing to risk in speaking up—including friends, jobs, and getting “kicked out of the club”—one thing they seem able to retain is the narrative of being a man.

Pharrell is presented by GQ as an ideal not because he is beyond masculinity but rather because he may exemplify some divine version of it which promises to keep men on top.

In the biting critique, “Is Adam Sandler Funny?,” following many pages detailing the misogyny of the comic’s many very popular films, West ends up writing that she doesn’t “begrudge the straight white boys their abundance,” but wishes “the rest of us had had the same.” The piece concludes with her watching with envy as the men of Saturday Night Live have a transcendent moment with Sandler as guest host—“it was something magic because Sandler was for them.” Of course Sandler is particularly for them because they are mostly white, and his whiteness is surely part of the reason they still feel affection for him (and maybe part of the reason West can still feel a tinge as well). Yet these same SNL men, who are not writing essays on Sandler’s misogyny or devoting their lives to a non-binary future, often also star in skits calling out structural bias which give them credibility and keep them comfortably in power.

Being able to perceive racism, fatphobia, or transphobia does not necessarily mean a person is willing to see it within themselves or work to address those forces effectively. A few pages away from that Pharrell interview in the same GQ issue, is a survey of over 1,000 readers of all genders on the topic of masculinity. It finds that an increasing number of men are familiar with the term “toxic masculinity”—over 50 percent of those 16 to 34—and yet only 8 percent of the men who know what the term means say that they’ve exhibited it. It remains a problem primarily for the bad men.

Part of the patriarchal script is learning, as a man, that one is above others, smarter and more powerful than the rest—especially those associated with femininity. This is doubly true if you’re white, straight, able-bodied, cisgender, Christian, thin, wealthy or hold power in any additional way. If the definition of what makes a man powerful shifts, but the equation in which power is tied to dominance over others doesn’t, then men can recuperate and assimilate without challenging the social structures that bestowed that power in the first place. In order to truly challenge white supremacist patriarchy, those people have to be willing to give up being seen as men altogether. To risk not just stepping out of line, but following a wholly new path.

Pharrell is presented by GQ as an ideal not because he is beyond masculinity but rather because he may exemplify some divine version of it which promises to keep men on top. Just as West points out Trey Parker’s political “neutrality” is a farce in service of the status quo, there is no neutral performance of masculinity (nor is there any noble performance of whiteness). Hundreds of years of white patriarchal violence justified by a gender hierarchy cannot be overcome by creating new masculine ideals within that same system, no matter how different they are. West herself writes, “We need new work that actively challenges old assumptions, that offers radical models for how to conceive of ourselves and how to treat others.” But perhaps this means looking to those demanding we fight to uproot the entire colonialist project and who aren’t afraid to say that in order to do so, we must lose our attachments to the dominant gender categories, opening ourselves to an infinite array of gender possibilities. Not a “new” version of manhood, or a new United States, but a new, and borderless, paradigm.

Imran Siddiquee is a writer, filmmaker, speaker, and activist. Their work has previously appeared in The Atlantic, Buzzfeed, Longreads, Bitch, and elsewhere. They live in Philadelphia, PA.

Ruth Bader Ginsburg on the Possibility of Roe v. Wade Being Overturned 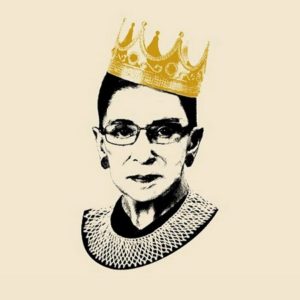 Ruth Bader Ginsburg on the Possibility of Roe v. Wade Being Overturned

The roots of Ruth Bader Ginsburg’s criticisms of Roe can be found in her litigation from the 1970s. Ginsburg first articulated...
© LitHub
Back to top