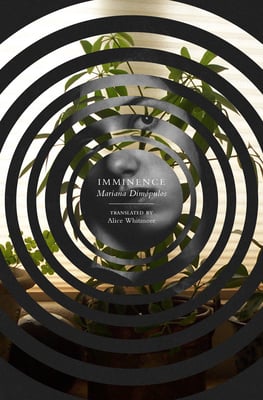 The following is excerpted from Mariana Dimópulos' novel, Imminence, translated by Alice Whitmore. Dimópulos was born in Buenos Aires in 1973. A writer and a translator, she is the author of three novellas, including All My Goodbyes and Imminence, and a critical study on the work of Walter Benjamin. She teaches at the University of Buenos Aires.

We’re alone together, for the first time. I have to touch him now. I try stroking a foot, then a shoulder. But no current lifts in me, nothing pulls at my chest the way they said it would.

The baby has a foot that shines silver from the wool of his bootie. I try again, but I can’t even get close. Removing the covers, removing any of his layers, is suddenly unthinkable. I laugh to myself. I tell myself it’s impossible, and the thought is like a soothing caress; nothing is wrong, it will pass.

Ivan comes into the bedroom and places his hands gently on my hair. He takes the bundle the baby is wrapped in and nestles it between two pillows in the middle of the bed. Only the baby’s slightly red and perfectly round face is visible now, as cryptic as the face of a clock. Ivan tells me dinner is ready and the baby is sleeping, and logic dictates that since the baby is sleeping we can leave him. Logic, in my mind, has always been a woman dressed in white—white now has the lustre of a silver foot.

We both sit down at the table, but Ivan immediately gets up and plunges the ladle into a pot on the stove. He doesn’t want me to lift a finger, he repeats, I have to take it easy after my month in hospital. It’s early to be eating, only six in the evening, and the autumn sun is pushing boldly through the kitchen window, which is open despite the cold. I tell myself: this should make me smile, the last rays of sunlight. So I smile.

‘Is that the baby?’ Ivan asks.

I don’t know. I didn’t hear anything.

‘I’ll go and check,’ he announces, and gets up from his seat again.

He doesn’t return for a while. I wait for him, dipping my empty spoon in and out of the bowl of tomato soup sitting before me. Then he returns, and he is beautiful like giants are. I would never say you are beautiful like giants. But if he asked me to I would have to tell him because a year ago I swore an oath, not an oath of love or fidelity or surrender or any of those grandiose lovers’ vows but an oath to always tell the truth.

He asks me if there are enough nappies for tonight and I answer him truthfully.

He refrains from asking me if I will do those things.

‘Don’t get up, it’s alright,’ Pedro insisted on that final night, as I got up to fetch water from the refrigerator. We had just started dipping our spoons in and out of our bowls of tomato soup. Then he stopped. He raised his pair of brown eyes and asked me if I could hear that.

He made a face, got up and left the kitchen. He returned a little while later carrying the cat, black and drooping. He had rescued it by the tail from atop a dangerously unstable washing machine we kept on the balcony.

The apartment is silent and the soup is still hot. Ivan starts speaking to me:

‘I’ve been thinking. I wanted to tell you. The baby’s name is Isaac.’

He lifts his eyes—the same deliberate motion with which he’d lifted his body minutes earlier. His eyes are made of snow and water. They have their own sky and their own passing clouds.

‘Isaac was my grandfather’s name,’ he says.

Coming from any other man, this would have struck me as vulgar. The unexpected revelation leaves the two of us momentarily perplexed. Isaac is a name without r’s; every time he says Isaac he will miss the dark, musical r of roses and radios.

Was he the first? No, there was another. At a bus stop, waiting for the 132 early one morning, after leaving Pedro’s place, I met a man whose name was also Isaac: dark and sleek-skinned and carrying a map under his arm like a baguette. We boarded the same bus just as the day was cracking open. Not long after I sat down, the seat to my left became vacant; with a smile that was like a gesture, the man sat down beside me and unfolded his map. The fact that the day was just beginning united us in a kind of fleeting complicity. I warned him against all the nonsense he would hear about Buenos Aires from the mouths of guides and well-meaning bystanders, as if he were the last witness left on earth. I took care not to embellish at all when I told him the name of a building, or the name of a street, and if behind it there loitered some national hero or calamity; then there were the theatres and banks and the interminable commerce of the city, interminably announced by all those interminable signs.

‘Are you getting off here? What a coincidence,’ he said when he saw me shouldering my handbag.

We walked a few metres together.

‘That sweet shop is over a century old,’ I pointed out, because I couldn’t see anything older to offer him, and old things are always of interest to travellers.

He asked me for some figures I didn’t know, and didn’t dare to guess. How many people, how many deaths, how many trains. The man named Isaac had a familiar weakness for numbers; he had been named after Newton. He seized his opportunity and suggested we get something to drink in the shop. I said yes, because I’d just come from another man and needed curing.

‘Ladies first,’ he said as he opened one of the bevelled glass doors.

Pedro laughed, Pedro clapped his hands together in the middle of the street, Pedro tried to embrace me when he heard my confession. It was our fourteenth date, and at the end of it I told him the thing that had been weighing on my chest like an impotent talisman: ‘This isn’t meant for me, I’m not one of those women.’ When he heard this he glowed with a radiance I’d never seen on him before. We were heading down Florida Street, fighting shoulder to shoulder for space on the footpath. We were coming or going from the cinema when he pulled me into a café and, against his better judgement, ordered (and was denied) a bottle of wine. Two cafés later we were finally seated. I drank the several glasses he handed to me. I did it for his sake, since I never drink. We got a little drunk on eggnog, drunk enough for him to speak loudly about our future, and his hopes for it; drunk enough for him to use the word us, insistently; so drunk, in fact, that when we left the café he left behind a handful of dusty, mildewed books, bought that same night from some dingy rat-hole on Avenida Rivadavia, now abandoned amid the several glasses we had emptied that evening.

He insisted on walking, so we walked. His happiness was incomprehensible to me; in his moments of silence I stole glances at it, and when he stopped and spoke to me I observed it directly, the way one observes a luxurious object—a feathered hat, for example, or an engraved ring—in a shop window. By the time we arrived at his place he seemed to have come to his senses. There was nobody home. With some pride he showed me the apartment’s two empty bedrooms, as if to prove it. He lived with one of his sisters, who had promised to move out soon. He repeated this fact to me several times, perhaps because he didn’t quite believe it; I tried to help him out by repeating it myself. When we took off our clothes and contemplated one another in the narrow bed, barely covered by the guileless, pitiless patterns of our underwear, he made me swear—although we both professed to be atheists—that I would stay there with him all night, that I wouldn’t steal away in the early hours of the morning to catch the number 132 bus, or, claiming insomnia, sit at his desk doing sums, as I’d done several times before, perched carefully on the edge of the seat, at the edge of the desk, taking care not to touch a single one of the books or papers that cluttered it, humming out some binomial formula, some simple or complex derivative, like a lullaby. Pedro and I fell asleep, and suddenly it was all true: when we woke the next morning it was morning, the sun was up, and we drank imported teas for breakfast, and the teacups were the same teacups, and we didn’t break any of them, and his sister still hadn’t returned and I was still there.

Ivan asks now with his eyes, which are two polished stones, if I am enjoying the soup.

I suspect we are not like all those other lovers sharing dinner tables across the world, the many millions of them, the many more than millions that have existed throughout history. I am suddenly struck by this suspicion, which I don’t deserve. I say ah, without making a sound, and watch as Ivan sprinkles soil on his tomato soup. We’re not like anyone, I think to myself. And I am wrong.

The cat was sprawled like a dog beneath the dinner table.

Now I think: I shouldn’t be thinking this, this is not good, this radical idea, but it’s already there, I have just thought it, just a moment before I walked into this kitchen I decided that happiness exists, and as I practice this unfamiliar happiness, which I’ve been doing for the last couple of hours, I realize the extent to which this same happiness might anaesthetise me, blind me, chase me away, as it does everyone else, all the time.

The water from that other night is equal to this night’s salt.

Excerpted from Imminence by Mariana Dimópulos, translated by Alice Whitmore. Reprinted with permission of the publisher, Transit Books. 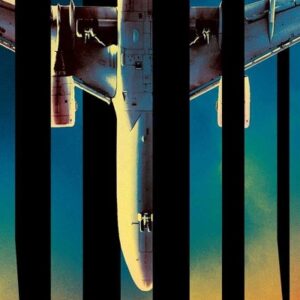 Falling by T.J. Newman, Read by Steven Weber Every Monday through Friday, AudioFile’s editors recommend the best in audiobook listening. We keep our daily episodes...
© LitHub
Back to top