Being a Ukrainian abroad and being a Ukrainian at home today represent two different kinds of pain. Iryna Shuvalova, a Ukrainian poet and literature scholar, traveled from her native Kyiv to China, where she works as a college counselor, as tanks began to appear on Ukraine’s borders.

I read the news feed

Whereas most of the Ukrainian poems in our earlier Lit Hub installments were written during the first eight years of the Donbass war, we are sharing a cycle by Shuvalova, written far away from the bombing, in Nanjing, China, following the February 24 invasion of Ukraine. The Ukrainian name for February is liutyi—literally meaning “furious/fierce”—and, as Shuvalova writes, the month proved furious. Shuvalova’s poems capture the news feeds, the texts, and the phone calls that bridge and compound the distance between Ukraine at war and a Ukrainian abroad.

Shuvalova began to attract attention in the 2000s as a young lyric poet who was an heir, in some sense, to the metaphysical tradition of Ukrainian poets of the 1980s like Oleh Lysheha and Vasyl Stus. But to this tradition she adds the changing relationships among individuals, the environment, technology, and post-Soviet culture. Shuvalova weaves natural metaphors with corporeal ones. She frequently writes in poetic cycles with internally overlapping themes and recurrent images that expose a broad spectrum of emotional and physical states. These states are encoded in mythological, biblical, and artistic references.

The distance between beauty and war, safety and home, is painful in its magnitude.

“The essence of poetry is speaking in multiple voices through one voice,” Shuvalova has said of her most recent book of poems. Shuvalova’s language is melodic, rhythmic, and deceptively simple. Her poetry sometimes sounds like a love song, sometimes like prophecy. She moves seamlessly from conversational language to compound words of her own invention. Refugees carry “evaculuggage” (evakvaliz). She titled her 2020 collected volume Stoneorchardwoods(Kaminsadlis). The book’s compound title suggests that the various elements in it are alchemically blended with each other, forging something new.

People in Shuvalova’s poems also break up into elements, and the world of inanimate objects can suddenly come to life with human voices. Bridging the gap not only between words but also between things, Shuvalova explores the phenomenon of memory at its deepest, most organic levels, where family and friends are intertwined with circulatory systems like trees by roots. In a 2020 poem, “You Deserve More,” Shuvalova writes:

(Translated from the Ukrainian by Anand Dibble.)

In her new war cycle, too, Shuvalova gives us poetry about the desire to define oneself as part of a fundamentally interconnected world. Memories, conjectures, acquaintances and nameless friends, blurred dreams and feelings constitute the fabric of her poems and lay down her personal universe. But here, the distance between beauty and war, safety and home, is painful in its magnitude. How do you respond to a friend’s texts about fighter jets? Can you wear happy earrings during a war?

Yuliya Ilchuk, Stanford, CA and Amelia Glaser, Cambridge, MA
(This is part five in a series on contemporary Ukrainian poetry.)

Kyiv-Nanjing
(to my loved ones)

long
as night when
they’re bombing

in the morning may
these red tracks
be seen
from afar

2. a poet can’t write about war

the war gave everyone a role—what’s yours?
covering your mouth with your palm?

she texts you
“I can hear explosions close by,
fighter jets flying”

you don’t know
how to respond.

a woman who shall remain nameless
awaits spring and war

not the right season

5. this is how a face looks

this is how the face
of a Korean teenager looks
asking, “teacher, are you ok?”
asking “teacher, how is everyone back home?”

asking
“teacher it’s the twenty-first century
what the fuck?”

normally we don’t talk much
but now…
but now.

how will you…?
constantly tortured by your ulcer
incapable of heating soup
hammering a nail taking out the trash
watering the flowers on time
keeping the cat from scratching up the sofa

I know
you will be a good shot

if today
someone dies there
what will i do

after all, asleep,
you’re already so close
to the other world
where there’s no shooting anymore

these two countries
have not yet severed
diplomatic ties

to stand, having made it across,
on the green shore of spring

but instead, the river roars and grabs us by the legs
this red slippery foaming
February-fury

knee-deep in darkness
we hasten to build rafts

our rolled-up pants
grow heavy
filling up with water

by the river, a bun in my hands
I pretend death doesn’t exist

spring is coming buzzing over plum trees
spring is coming it’s already spring in nanjing
the columns are moving toward kyiv military columns
on the river, a bun in my hands
I pretend death doesn’t exist

I read the news feed
cry straight into my bun

worry
is sitting on my neck
like a hairy devil

a devil with a human face

europe is backing off
europe stands cautiously aside

trying, confused,
to wipe the red splashes
off its patent leather shoes

the news doesn’t happen to us
happens to us

Translated from the Ukrainian by Amelia Glaser and Yuliya Ilchuk, in consultation with the author.

Iryna Shuvalova (b. 1986) is a poet, translator and scholar originally from Kyiv. She holds an MA in Comparative Literature from Dartmouth College (2014) and a PhD in Slavonic Studies from the University of Cambridge (2020). Iryna has authored five books of poetry: Ran, Os, Az, the bilingual Pray to the Empty Wells, and Stoneorchardwoods. Her poetry has been also anthologized, and published in periodicals in Ukraine and beyond in nine languages, including Modern Poetry in Translation, International Poetry Review, Podium Literature, Radar.

Amelia Glaser is Associate Professor of Russian and Comparative Literature at U.C. San Diego. She is the author ofJews and Ukrainians in Russia’s Literary Borderlands (2012) andSongs in Dark Times: Yiddish Poetry of Struggle from Scottsboro to Palestine(2020). She is currently a fellow at the Radcliffe Institute for Advanced Study. 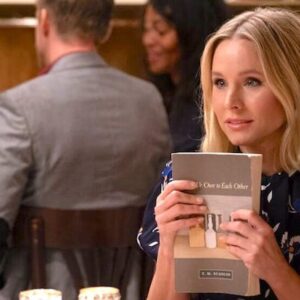 Good Place Creator Michael Schur Wonders: What Makes Someone Good or Bad? When I began working on The Good Place, literally at square one of trying to figure out what made someone “good” or “bad,”...
© LitHub
Back to top