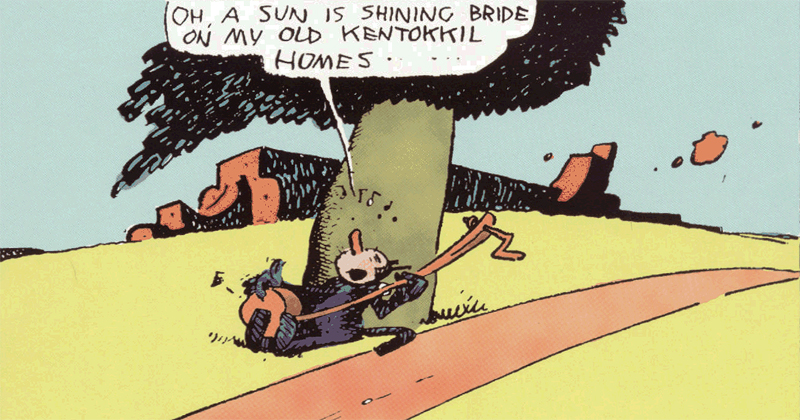 The Secret Resonances Between Krazy Kat and Huckleberry Finn

George Herriman was never seen without a book, his friend Barbara Bedwell once told me. In his masterful comic strip Krazy Kat, Herriman made no secret of his favorite writers. At any moment, Krazy and Ignatz Mouse might pause the main action—Ignatz throwing a brick at Krazy Kat and Krazy swooning in adoration—just long enough to quote Shakespeare or joke about Charles Dickens. On another day, they might be joined by their desert friend “Don Coyote,” an homage to the Miguel de Cervantes novel that Herriman read as a schoolboy.

Yet in the ten years that I spent researching the biography Krazy: George Herriman, A Life in Black and White, one author eluded me: Mark Twain. It seemed there must be a connection between the cartoonist from New Orleans and the humorist from Hannibal. They shared a sly wit, a love of vernacular language and popular entertainment, and a penchant for sharp observations about race, class and social identity. Plus, their lives and careers overlapped: The Adventures of Huckleberry Finn was published in the United States in 1885, when Twain was a 49-year-old successful author and Herriman was a four-year-old boy. When Twain died in 1910, Herriman had been cartooning for more than ten years.

Still, all I’d been able to find were a few stray mentions in the Los Angeles Examiner from Herriman’s time there as a staff artist. These included a 1906 illustration of an article about a statement Twain had made that “light colored clothing enlivens the spirits,” and a 1908 cartoon of Danish boxer Battling Nelson pronouncing a boxing report “Better’n Huck Finn.”

That was all—until, at a reading for Krazy at Comix Revolution in Evanston, Illinois, I met Northwestern University professor Bill Savage. We were talking about best-known daily Krazy Kat comic of all, from January 8, 1918. In it, Krazy Kat and Ignatz Mouse are seated at a table, discussing the nature of language:

Krazy: Why is “lenguage” “Ignatz”?

Ignatz: “Language” is that we may understand one another

Krazy: Is that so?

Krazy: Then, I would say, lenguage is, that we may mis-unda-stend each udda.

This Kat and mouse conversation is often cited by scholars and fans as a sort of statement-of-purpose for Herriman, a mixed-race cartoonist, then “passing” for white, whose comics frequently show how language is so poorly suited for the tasks we give it, especially those concerning social or racial identity. Savage, who uses works from both Herriman and Twain in courses he teaches at Northwestern, pointed out something I hadn’t seen: the comic’s marked similarity to a conversation between Huck and Jim in The Adventures of Huckleberry Finn.

During their adventures on the Mississippi River, the travelers first debate the wisdom of King Solomon splitting a baby in half; Jim successfully argues that Solomon’s verdict doesn’t make sense. Then they launch into a second debate, this one about language. Jim is outraged that a Frenchman would insist on saying “Polly-voo-franzy” to ask if one speaks French. Their dialogue continues with Huck making his case:

Huck: Looky here, Jim; does a cat talk like we do?

Huck: It’s natural and right for ‘em to talk different from each other, ain’t it?

Huck: And ain’t it natural and right for a cat and a cow to talk different from us?

Huck: Well, then, why ain’t it natural and right for a Frenchman to talk different from us? You answer me that.

However, it doesn’t take Jim long to shoot his young friend down:

Huck: No, she ain’t either of them.

Jim: Well, den, she ain’ got no business to talk like either one er the yuther of ‘em. Is a Frenchman a man?

Jim: Well, den! Dad blame it, why doan’ he talk like a man? You answer me dat!

Throughout their debate, Savage pointed out, Jim uses the classic Socratic method of asking questions that eventually lead to Huck’s downfall. So does Krazy Kat. “Krazy is Jim: the Kat is being totally logical in response to knee-jerk assumptions brought to the conversation by Ignatz,” Savage said.

Savage suspects that Herriman had Twain in mind when he wrote his comic about language. “But it could be, like so many places along the River, confluence,” he added. I also stopped short of assuming that Herriman was nodding to Twain—until I read the Krazy Kat strip that Herriman published just one day after the “mis-unda-stend” story. Herriman often used sequential daily strips to come at gags from different directions. And so on January 9, 1918, Krazy and Ignatz return to the topic of language:

Krazy: A fella just said “Oh reewar” to me.

Ignatz: Sure that’s the way a French man says goodbye.

Krazy: Do all of them say it that way, “Ignatz”

Krazy (walking away): Do you think they dunt know no betta, or is it just ignirince?

In the final panel, Krazy bends over to peer at a caterpillar. “How do you say ‘good-bye,’ l’il ketta-pilla?” Krazy asks, as Ignatz’s brick zips overhead.

This comic is more than similar to the scene from The Adventures of Huckleberry Finn; it is practically a talking-animal adaptation of it—with a brick for an exclamation point.

Another connection between Herriman and Twain sheds some light on this strip, and it’s both a complex and a troubling one. Both writers were devotees of blackface minstrel shows, widely popular during this time, and both drew gags and themes from minstrelsy for their work. In many early daily Krazy Kat strips, Krazy Kat and Ignatz play the traditional roles of Mr. Interlocutor and Mr. Bones. Twain’s work, too, draws from the minstrel stage. University of Virginia professor Stephen Railton points directly to the “King Solomon” passage as an example of minstrel humor. Railton reports that when Twain read aloud from that section at public events, white audiences roared in laughter, as if at an actual minstrel show. Asks Railton: “Does Mark Twain’s representation of Jim reinforce or complicate or subvert such prejudices?”

For Savage, the conversation between Huck and Jim is a turning point in the novel. “This scene is the beginning of Huck truly coming to see Jim as a human being, because he has to admit that Jim wins two arguments against him,” he said. In Krazy Kat as well, the conversation between Ignatz and Krazy highlights something essential about Herriman’s comic.  In Krazy, I looked at how Herriman can be considered along the lines of other black figures of the time, including boxer Jack Johnson and minstrel player Bert Williams, both of whom used minstrelsy to make  statements that defy the caricatures of black men and women as less than fully human. In these two early daily Krazy Kat strips, Herriman does this by raising an essential question about language and identity with which we still grapple. If it is all a mis-unda-stending, and reality is shifting and subjective, how do we communicate at all—besides, of course, a brick to the head?

Although Herriman’s work should in no way be reduced to the articulation of this problem, it is hard for me to imagine Krazy Kat without it. Despite the more frequent mentions of Shakespeare, Dickens, and Cervantes, it might just be Twain who casts the longest shadow across Krazy Kat’s desert setting of Coconino County.

Michael Tisserand is a New Orleans-based author whose most recent book, Krazy: George Herriman, a Life in Black and White was a finalist for the National Book Critics Circle and PEN America awards for biography, and is a finalist in the Eisner awards. His other books include The Kingdom of Zydeco and Sugarcane Academy: How a New Orleans Teacher and His Storm-Struck Students Created a School to Remember. He can be contacted at michaeltisserandauthor.com. 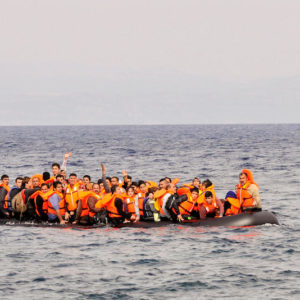 At six in the morning, 18 miles off the Libyan coast, Pietro Catania, captain of the Medécins Sans Frontières rescue...
© LitHub
Back to top