via the new press

From a Series of 2007 Conversations with Ray Suarez

The following is a never-before-published conversation with Howard Zinn, conducted by the broadcast journalist Ray Suarez in 2007.

Ray Suarez: The conventional tellings of American history often portray the Great Depression as an aberration, a sudden descent into economic calamity from the relatively prosperous efflorescence of the Jazz Age. But in A People’s History, you tell a very different story about the roots of the Great Depression being very much in the 1920s.

Howard Zinn: The idea that the great Depression of the 1930s was an aberration in an otherwise prolonged march of prosperity in the United States is itself simply false. There had been depressions, and severe ones, all through American history from the early 19th century on. The Depression of 1873 was one of the causes of the great Railroad Strike of 1877. There was a Great Depression in 1893; I mentioned the fact that Emma Goldman was imprisoned for addressing people in New York who were in desperate trouble because of the economic crisis of 1893.

I became aware of this myself after studying history—and you would think that somebody who studies history on the graduate level is now really a master and knows everything. Of course, what you discover is that there are things you don’t know, things that even your most advanced courses in history would not tell you. I did not learn a certain important truth about the pre-Depression years, about the 1920s, until I began doing research on the life and career of Fiorello La Guardia. I was doing my doctoral dissertation and I came across the papers of Fiorello La Guardia, which had just been deposited in the Municipal Archives of New York City by his widow.

La Guardia was a congressman in the 1920s, representing a district in east Harlem. I was reading all of the letters that had been sent to La Guardia in the 1920s, in the age of prosperity, the Jazz Age, this period that still is remembered that way. There were people writing letters saying, “My husband is out of work. They have turned off the electricity, ’cause we can’t pay the bill. My kids are going hungry.” And when I looked into other parts of the country, I realized that although it wasn’t a depression in the strictest sense, the 1920s was a period of great wealth on one side and poverty on another side.

What that did for me—and I think this is what history very often does—was make me wonder if what I had learned about that period was true also of other periods. I was writing about this in the 1950s, and I realized that the 1950s are not considered a period of tough economic deprivation for most Americans. But I wondered, is there an underside to the 1950s? I read Michael Harrington’s book The Other America, and that is exactly what he was talking about. Here in the so-called prosperous 1950s there were people suffering all over the country. So yes, the great Depression was indeed a low point, but it doesn’t mean that the other periods preceding it and after it were high points.

Most Americans don’t know about the Bonus Army, even though it was a very, very dramatic moment in American history.

Ray Suarez: It’s funny how master narratives get built, and even in the face of all kinds of other evidence, you just can’t pierce the armor of that master narrative. When you  think about the sepia-toned silent movie footage that runs through Jazz Age storytelling, those people doing the Charleston, the tops being knocked off of champagne bottles, and so on—they don’t intersperse that with mounted soldiers ousting people out of tents during the Bonus Marches. Those Bonus Marchers were working-men who just couldn’t make it in 1920s America.

Howard Zinn: It’s interesting that you talk about the Bonus Army, because that is certainly something known to people who know history. But most Americans don’t know about the Bonus Army, even though it was a very, very dramatic moment in American history at the very beginning of the Great Depression.

In the 1930s America was in a state of near-revolution, something that very much worried the people in Washington.

If you are going to risk your limbs, you have to be given promises, so the veterans had been given promises that at least they would get a bonus after the war. But a bonus was never given to them, and now that they were hungry, they organized what was called a Bonus Army. They came from all over the country, thousands of them, came in every which way they could—riding the rails, hitchhiking, whatever. They arrived in Washington and encamped across the Potomac River from the Capitol. They set up tents there, and they wanted to be a visible presence in Washington, to say to Congress, “We want our bonus.”

Herbert Hoover was president. I don’t know if any other president would have behaved differently. I don’t know, if we had had a Democratic president at that time, if he would have behaved differently. But what Hoover did was to send the army to destroy their camp and drive them out of there. It was one of the most shameful episodes in modern American history.

The country was in turmoil in the 1930s when Roosevelt came into office. There were strikes all over the country. There were riots. There were people breaking into places where there was food. There were children marching into city halls demanding that they be fed and taken care of. Tenants were organizing and refusing to be evicted, bringing furniture back into the homes after it had been taken out to the street. It was a country that was in a state of near-revolution, something that very much worried the people in Washington.

Certainly Roosevelt was sensitive to this. The New Deal was the result of it—the result of the combination of Roosevelt’s sensitivity and the events, the uproar, the rebellions taking place all over the country, which he had to take notice of.

Eleanor Roosevelt had a better grasp of how poor people lived, of how black people were suffering in a racist society.

Ray Suarez: It sounds as though, in part, you think the New Deal was done to forestall revolution. I guess historians have different points of view that we could graph out on a continuum, from the belief that he saved the country because he wanted to save the people, to a more cynical take that he saved capitalism because he realized it was having a nervous breakdown but really wasn’t all that interested in saving the people per se.

Howard Zinn: I would probably argue that there was truth in both sides. This sounds as if I am a moderate, compromising, finding the center between two points of view, but I wouldn’t give equal weight to both analyses. I think, yes, Roosevelt was saving capitalism, no question about that—and I think he was conscious of that too.

I think he was saving the system that he believed in from revolution, from very deep trouble, but I think he also was a human being responding to the plight of people. He may not have responded so easily if there hadn’t been all this turmoil and threat to the system, but there was something in Roosevelt that wanted to do some good.

I think probably one of the elements that should be considered in assessing Roosevelt is that he had a wife, Eleanor Roosevelt, who was actually more sensitive than he was to the plight of poor people. She had been a social worker on the Lower East side of New York; she had actually been among the poor. You can’t say this about Roosevelt himself. She had a better grasp of how poor people lived, of how black people were suffering in a racist society, and I think she was a good influence on Franklin Roosevelt. 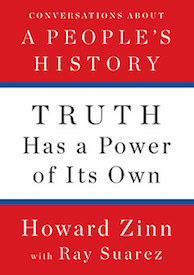 Copyright © by 2019 by The Howard Zinn Revocable Trust and The Independent Production Fund. This excerpt  originally appeared in Truth Has A Power of Its Own: Conversations About A People’s History, published by The New Press and reprinted here with permission.

Howard Zinn was an American historian, playwright, and social activist. He was a political science professor at Boston University. Zinn wrote more than twenty books, including his best-selling and influential A People's History of the United States.

Pilgrims, Priests, and Breaking Bread in an Alpine Monastery 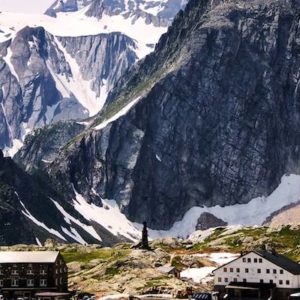 Pilgrims, Priests, and Breaking Bread in an Alpine Monastery

A bell summons us to supper in the dining room of a hospice that’s been welcoming followers of Sigeric’s trail for ten centuries....
© LitHub
Back to top
Loading Comments...