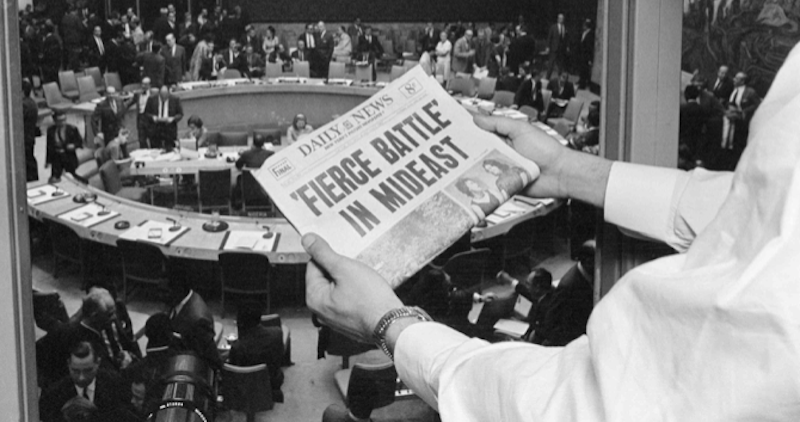 On a bright, sunny morning early in June 1967, I walked out of Grand Central Station in Manhattan, en route from our family home in Mount Vernon to my father’s office in the United Nations building. The Six-Day War was raging in the Middle East, and the news reports indicated that the Egyptian, Syrian, and Jordanian air forces had been wiped out in a first strike by Israel. I dreaded the prospect of another crushing Israeli victory, but even with my limited exposure to military strategy, I knew that an army in the desert without air cover would be easy pickings for any air force, especially one as powerful as Israel’s.

Out on 42nd Street, I noticed a commotion. Several people on the sidewalk were holding the corners of a large bedsheet, which was weighed down with a heap of coins and bills. Others were coming from every direction to throw in more money. I stopped momentarily to watch and realized that the people were soliciting contributions for Israel’s war effort. It struck me that while my family and many others were preoccupied with the fate of Palestine, lots of New Yorkers were just as worried about the outcome for Israel. They sincerely believed that the Jewish state was in danger of extinction, as did many Israelis, alarmed by the empty threats of certain Arab leaders.

President Lyndon B. Johnson knew otherwise. When Abba Eban, Israel’s foreign minister, told Johnson at a meeting in Washington, DC, on May 26 that Egypt was about to launch an attack, the president asked his secretary of defense, Robert McNamara, to set the record straight. Three separate intelligence groups had looked carefully into the matter, McNamara said, “and it was our best judgment that an attack was not imminent.” “All of our intelligence people are unanimous,” Johnson added, that if Egypt were to attack, “you will whip hell out of them.”[1] As Washington knew, Israel’s military in 1967 was far superior to the militaries of all the Arab states combined.

The war unfolded much as the CIA and Pentagon had foreseen. Israel’s lightning first strike destroyed most Egyptian, Syrian, and Jordanian warplanes, giving it complete air superiority, which, in that desert region, in that season, provided an absolute advantage to its ground forces. Israeli armored columns thus were able to conquer the Sinai Peninsula and the Gaza Strip, the West Bank, including Arab East Jerusalem, and the Golan Heights in six days. If the reasons for Israel’s decisive victory are clear, the factors that led to the war are less so.

The Hundred Years’ War on Palestine: A History of Settler Colonialism and Resistance, 1917–2017 by Rashid Khalidi has been shortlisted for the 2020 Cundill History Prize.

A key cause was the rise of militant Palestinian commando groups. The Israeli government had recently begun to divert the waters of the Jordan River to the center of the country despite great Arab distress and even greater impotence on the part of the Arab regimes. In January 1965, Fatah launched an attack to sabotage a water-pumping station in central Israel. This was intended as a strike of symbolic significance, the first of many, designed to show that the Palestinians could act effectively when the Arab governments could not, and to embarrass those governments into action. Fatah was regarded with suspicion by Egyptian officials as a loose cannon, recklessly provoking Israel at a time when Egypt was heavily engaged in military intervention in a civil war in Yemen and in building up its economy.

It struck me that while my family and many others were preoccupied with the fate of Palestine, lots of New Yorkers were just as worried about the outcome for Israel.

Given Israel’s overwhelming military superiority, and the fact that Egyptian forces were tied down in another war, Egypt’s provocation of Israel in May 1967—by moving troops into the Sinai Peninsula and requesting the removal of UN peacekeeping forces—appears illogical. But Egypt was responding to an upsurge of Palestinian guerrilla raids on Israel, which had issued counter-threats, and it felt obliged to answer this challenge to maintain its prestige in the Arab world.[2] Whatever its motives, Egypt’s moves in Sinai constituted overt incitement of Israel. Moreover, they provided the casus belli that allowed the Israeli military to launch a long-planned strike, one that smashed three Arab armies and changed the face of the Middle East.[3]

Every morning during the war, I headed down to the UN—changing my route to avoid the bedsheet fundraisers—to my father’s thirty-fifth-floor office, with its panoramic view of the East River and Queens. He worked in the division of Political and Security Council Affairs and and sat in on Security Council meetings whenever the Arab-Israeli conflict was discussed, which meant about half of its sessions during the decade and a half that he was there, until he died in 1968. At his office, I listened to the radio, read the news, and generally tried to make myself useful until the council was called into session. I was then able to sit in the visitors’ gallery while my father would take his seat in the last row.[4]

The council had been in session repeatedly since the crisis had begun in earnest the preceding month. During the six days of the war itself, the council held eleven sessions, many of them running into the early hours of the morning. The pace and the workload were grueling, and my father, who with his colleagues had to spend many hours preparing materials and drafting reports, looks haggard and drawn in photos taken at that time.[5]

By Friday June 9, the fifth day of the war, Israeli forces had decisively defeated the Egyptian and Jordanian armies and occupied the Gaza Strip, the Sinai Peninsula, the West Bank, and Arab East Jerusalem. Early that morning Israel had begun storming the Golan Heights, routing the Syrian army, and was advancing rapidly along the main road toward Damascus. The council had ordered comprehensive cease-fires on June 6 and 7, but Israeli forces entering Syria ignored these resolutions, even as their government loudly proclaimed its adherence to them. By that night in the Middle East (still afternoon in New York) Israel’s army was approaching the key provincial capital of Quneitra, beyond which stood only the flat Hauran plain between their armored columns and the Syrian capital, just forty miles away.

Early in the council’s session, which had started at 12:30 pm, the Soviet Union proposed a draft of a third and more urgent cease-fire resolution. At this point, after the humiliating defeat of the Soviet-equipped Egyptian army and the seizure of the Golan Heights, the Soviets were desperate to protect their Syrian clients from further reverses, especially from an Israeli march on Damascus. The urgency was reflected in the increasingly testy interventions in the debate by Ambassador Nikolai Fedorenko, the Soviet representative. The resolution, SC 235, which passed unanimously at about 1:30 pm, demanded of all the parties to the conflict “that hostilities should cease forthwith.” In an unusual step, it also called on the UN secretary-general to “arrange immediate compliance” with the cease-fire and report back to the council “not later than two hours from now.”[6]

At this point, after the humiliating defeat of the Soviet-equipped Egyptian army and the seizure of the Golan Heights, the Soviets were desperate to protect their Syrian clients from further reverses.

As the session wore on into the afternoon, I fidgeted nervously, waiting for the secretary-general’s confirmation of compliance with the cease-fire. This would signal that the Israeli advance had been halted. But as the minutes ticked by, fresh reports kept coming in of Israeli troops getting closer and closer to Damascus. It seemed as if the council might have been on the point of taking some action to enforce its demand for the fighting to stop when Ambassador Arthur Goldberg, the US representative, asked for an adjournment. After a desultory discussion, the council agreed to adjourn for two hours, and the delegations slowly filed out of the chamber.

I rushed down to meet my father, wanting him to explain why the council had agreed to allow another delay. Goldberg wanted to consult with his government, my father told me flatly. I was incredulous. How much consultation was needed to impose a cease-fire resolution? With a strange, bitter smile, my father responded dispassionately in Arabic. “Don’t you understand?” he said. “The Americans are giving the Israelis a little more time.”

Thanks to Ambassador Goldberg’s maneuvers, the advance into Syria did not stop, continuing until the following afternoon. By then, the Security Council had spent nine more hours in acrimonious debate stretching into the early hours of June 10. Throughout, Goldberg had reprised his delaying tactics.

Minor though the incident was, the ambassador’s performance betokened a major shift in the United States’ policies toward Israel. What we had witnessed that day was evidence of a new Middle Eastern axis in action—the armored spearheads on the ground were Israeli, while the diplomatic cover was American. It is an axis that is still in place today, over a half century later.

[3] Michael Oren, Six Days of War: June 1967 and the Making of the Modern Middle East (Oxford: Oxford University Press, 2002), notes that the surprise air attacks were “long planned” (p. 202), and that a range of long-standing contingency plans existed for attacking and occupying the Syrian Golan Heights (p. 154), the West Bank and East Jerusalem (p. 155), and the Sinai Peninsula (p. 153).

[4] Times have changed at the UN: this division is now called Political Affairs and is usually headed by an American.

[5] My father can be seen briefly rising in the last row around the council table just as the resolution is passed (presumably to confirm the vote count) in a Universal Newsreel clip on the June 9 cease-fire vote, which is embedded in the Wikipedia article on the June war: http://en.wikipedia.org/wiki/Six-Day_War. 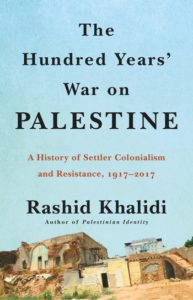 Excerpted from The Hundred Years’ War on Palestine: A History of Settler Colonialism and Resistance, 1917–2017 by Rashid Khalidi. Published by Metropolitan Books, and imprint of Henry Holt and Company.

Rashid Khalidi is the author of Palestinian Identity, Brokers of Deceit, and The Iron Cage, among others. His writing has appeared in the New York Times, Boston Globe, Los Angeles Times, Chicago Tribune, and many other journals. He is the Edward Said Professor of Modern Arab Studies at Columbia University in New York and editor of the Journal of Palestine Studies. 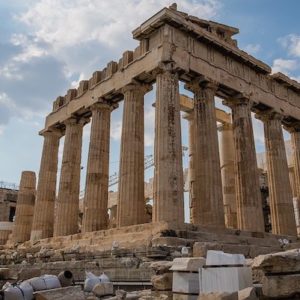 The story I have set out to tell in this book is the story of Greece as a modern nation. I have chosen, therefore, to understand...
© LitHub
Back to top
Loading Comments...