VIA SIMON AND SCHUSTER

On Method Writing and Burning Bones

At the meat processor, I told them what I wanted. It was a strange request, and I offered a difficult explanation. The butcher just shrugged. I said I’d pay, but there was no charge. One less carcass drawing flies and spilling from the dumpster out front. “Come by this afternoon,” he said. “I’ll put something back for you.”

When I returned, I was directed out back to a concrete patio where they hoisted and bled the deer, stripped their fur, hosed them off and hacked them down to traditional cuts. A young man sat on a plastic bucket, smoking a cigarette and daydreaming. I told him they were holding a deer for me. He mashed the butt under his shoe and disappeared inside. He returned a moment later carrying a waxy cardboard box that contained the dead animal. It was stripped of its meat, just organs, fur, and bones, as I’d requested.

“How come you want the bones and not the meat?” he asked.

I didn’t tell him the deer bones were a substitute for human bones, or that I wanted to know if a man could be cooked in a smokeless, homemade oven in the backyard. Here, in certain circles, you don’t tell people you make up stories for a living. There’s no practicality, nothing to grasp with your bare hands. I’m surprised when people are impressed. It’s because they think there is money in it, and nothing will convince them otherwise.

As he carried the box to my car, I described the experiment I was conducting. I’d made an oil drum retort with the help of a local welder. Under the right conditions, the bones could be cooked to pure organic charcoal, which may then be ground down and mixed in with soil to form a potent fertilizer called biochar.

“Why you doing that?”

If it worked, then the ground bones could be folded into earth or water and discarded, all in a matter of hours. But I told him instead, “To save the earth, man.”

“Damn! You better remember who give you them bones when you get rich,” he said, smiling, maybe a little serious.

I took the box of deer remnants home and stashed it on my back porch, covered it with a tarp so that dogs or neighbors wouldn’t be tempted to get into it.

That night a warm front moved in. It rained for three days, and the air was so humid the bugs returned in summer swarms and everything stayed wet. The box grew ripe, and when I came back a few nights later, the blowflies under the tarp sounded like a small engine. I pulled back the corner and they sputtered out on a noxious wave.

The novel I’d imagined was about a farmer who finds a dead body on his land. My guy would not be in his right mind, and so, rather than report it to the authorities, he’d convince himself to get rid of it quietly and quickly, without the alarming smoke or odor. He’d have reason to believe the law wasn’t giving him a fair shake, so he’d rationalize: “no body, no crime.”

Creating a believable motivation for this character would be a tight-rope walk, so I really wanted to nail the method of disposal. In my research on progressive farming, I’d read about biochar and learned how to make it. I decided to build my own backyard crematorium, first to make sure it worked, but also to glean some true details to lend the scene credibility. Admittedly, I was procrastinating, and maybe I was a little nuts.

Here, in certain circles, you don’t tell people you make up stories for a living.

Staring into that box of gore, as scores of white maggots writhed through the red carcass, I thought I didn’t want to go through with this. Something about it seemed wrong. Maybe it was the wretched, sinister smell. Later, in fiction, I would describe it “like ripe garbage or rancid fat or burnt coffee.” But there was something else—a musk that reminded me of dank bodies, or a putrid, overripe bloom. My brain must have registered the scent of spoiled meat and squirted a dose of fear and revulsion into my senses.

I’d never butchered a deer, a shame no Mississippi boy is proud to confess. I took the box and the tarp into the yard and set to work with a hatchet and a dull kitchen cleaver. The good meat had been taken already, and what remained was difficult to untangle. I whacked and sheared, separated fur and bones from the clasps of sinew and tendon. Without the edifying purpose of fresh meat, what was left but perversion?

A light came on in the house not twenty feet away. It was my four-year-old daughter’s bedroom. I could imagine her going to sleep and hearing that clang of the machete, then peering out the window at a shadowy figure—Daddy?—on his knees in the dark, swinging his hatchet at a dead furry animal in the backyard.

Around the corner and out of view, I dumped the organs in a tall soup pot and arranged a propane burner beneath them. I wanted to know if they would cook down to a rancid lump of indistinguishable tissue. The bones were still etched with meat. I built a small campfire with wet, smoky wood and threw some of them on the flames for a quick scorch before they went into my small drum. I watched the crooked little severed legs smolder in the flames and imagined the eyes of the neighborhood on me.

I was tip-toeing around the yard, tending to all the disparate slaughter and swatting at insects, a gallon of sweat trembling off me, when I noticed the police car trolling slow along the side street. Was he off-shift or scoping? Had someone called about a bad smell in the neighborhood? The weird guy on the corner has a fire going, and he’s chopping something in the shadows.

I was overcome briefly by a strong sense of shame and suppression. Perhaps I’d tricked myself into believing this was really a human. Did that mean I had the stuff to hack a person down to bits and hide them away in pots and barrels and break them over flame?

The patrol car moved along, but in a few minutes I thought I heard the cop’s radio squawk. I ducked inside the house and stood in the mudroom trying to reason out an explanation. There was nothing unlawful about this. Maybe strange and vaguely troubling, to use a deer as a surrogate human for desecration, but not illegal. At worst I was committing a mild civic infraction. It would be ridiculous to try and convey my artistic ambitions to the law, but maybe they’d accept my environmental alibi. Saving the earth at 9 p.m. on a Wednesday night? I’d get a stern reprimand, possibly a fine. No doubt, my address would be added to a watch-list.

I hissed for my wife, who knew what I was up to in the backyard. From the kitchen, she caught a whiff of me and then a look—all sweat-glazed, bulging red smoke eyes, shirt and arms streaked with gore. She refused to let me in the house but said she’d just gotten off the phone with a friend of ours the next block over who reported a smell like “burning ass” in the neighborhood and figured it was me and the deer.

“Did she call the cops?” I whispered.

“I think they saw me!” I said, peeping out the side window, anticipating the swinging flashlight beam of a nosy officer. “Go look out front!”

I got the all-clear, cut the porch light off, and slipped outside. I stood in the shadows and listened to the crinkle of the fire, the tumult of insects tucked in wet leaves, a dog barking two streets over.

My wave of morality passed, and I fired up the barrel stove. The bones went into a small drum that fit inside the larger 50-gallon metal barrel. I covered the smaller barrel with sticks and wood chips and kindling, set it all on fire, fastened the lid, and fixed the chimney pipe to the top. The fire began to work the bones, releasing their gases, which combusted inside the barrel, creating an extremely hot fire that cooked the bones to charcoal in four hours. There was no smoke, only a wave of heat dancing up from the chimney spout, in a process that proved, in the end, clean and efficient.

Later, when the fire inside burned down and the barrels cooled, I removed the inner drum filled with bones. They came out as hoped, preserved beautifully in solid black with crystallized shades of green and lavender. The bones snapped and broke like chalk, and when mixed with a little water, they ground down easily to grit.

And so I got what I was after, not only the details—the unholy smells, the texture of the char and the slippery viscera, the ping of the fire barrel as it did its quiet work—but also a greater understanding of my character, his exacting nature and mounting paranoia. It was still foreign to me, what it would take to commit this to a human body, but I had an inkling of what it might feel like after the fire and blood and terrific stink.

The smell of these things was a certain disgrace. The scent lingered on my hands and in my nostrils for days. Even now, years later, it returns of its own volition. I smelled it just now, writing this. Not a memory but the actual smell. It arrives sometimes when death is near, or when I eat venison, which I somehow still enjoy. Just a taste of it, briefly nauseous, and then it passes.

A few months later I was in the supermarket, browsing the meat case, looking at the succulent red cuts of beef with woody striations. A butcher appeared from the back. “Where my cut?”

I didn’t quite catch what he was saying and replied, “No, thanks, I’m just looking.”

“Naw, what about them deer bones?”

It took a few seconds, but then I recognized him. The kid from the processor. He’d traded up for the supermarket.

“You burn em?” he asked, a little put out with me. I’d neglected to include him.

“Yeah,” I said, amused that he remembered.

I didn’t know what he was getting at. “It worked,” I said.

“What about the money?”

“What money?” I asked. “It was just an experiment. For my own curiosity.”

I shrugged. How to explain it? It was nothing people understood, this approximation of murder.

“Now you know where to find me,” he said, grinning. “You remember who give you them bones. I want in. I want my cut.”

Interview with a Bookstore: Parnassus Books 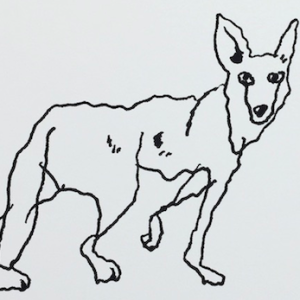 Riverhead has teamed up with artist Jason Polan (the guy who's going to draw every person in New York City) to create...
© LitHub
Back to top