How to Be Human in a Time
of Climate Crisis

On Relearning the History of an Earth on the Verge

The full gravity of our ecological crisis didn’t hit me until the birth of my second child, which wasn’t the best timing.

I can’t point to any single event that pushed me from accepting climate change as fact to knowing in the pit of my stomach that it was happening now, and fast. Maybe it was the Carr and Redding fires ripping through Northern California at the time, or the record breaking heat waves scorching countries around the world. I certainly felt it more viscerally as my Navy-enlisted husband and I packed for our third hurricane evacuation from the Southeast coast in as many years.

All of those moments coalesced when I held my eight-pound baby in my arms, her face bruised purple from delivery. Suddenly, I realized that the world I imagined when I thought about having kids in the first place didn’t exist anymore. We were somewhere else, somewhere new and changing and volatile. And I was terrified.

The more I read, the more I realized that nature writing is, and likely always has been, about as raw as it can get.

One term for this is climate anxiety, a clinical frame for totally freaking out about our science-predicted doom. My friends and family suspected baby blues or postpartum, and a part of me hoped they were right. But while I’m sure the hormones didn’t help, I knew that my fears were not unreasonable (a significant qualifier on the Edinburg Postnatal Depression Scale). To my mind, it would have seemed unreasonable not to weep over the future facing our children, knowing what scientists know today.

But weeping disturbed my newborn, who nursed every two hours on the hour, and it didn’t do much to help our three-year-old adjust, either. I tried distraction for a while, but that felt disorienting, like attempting to re-enter a dream when you’re no longer asleep.

So I tried the opposite approach. Like Bruce Wayne to the bat cave, I immersed myself in the literature of the very thing I feared most: our climate crisis. And I did it with a baby on my boob.

I started with articles, clicking on every horrific headline I saw, from starving polar bears to ice shelves calving to islands of plastic in the Gulf of Mexico. Reader, I do not endorse this method. Forward them to your climate-denying uncle, call your senators, then move on with life. A few scores of clicks left me more anxious than ever and without any firmer grasp on what was really happening to the planet.

I needed a slower approach—works written by people who had been willing to sit in their understanding of the science for years, decades even, in order to pen together a human response to this human-caused crisis.

In other words, I needed books. Good ones.

I have never excelled in science and hadn’t studied it since high school, so I understood very little about the “what” of climate change. I threw myself into a series of gut-punching histories detailing where we are and how we got here. I started with Al Gore’s landmark An Inconvenient Truth, which gave me graphs and figures to cling to as I gathered my bearings on this new planet. I spent a brutal eight days marching through Elizabeth Kolbert’s The Sixth Extinction and followed it with Yuval Noah Harari’s Sapiens. Turns out, environmental erasure and extinction have tracked with human migration pretty much since the dawn of our species, although these forces have accelerated exponentially in recent years. This did not comfort me.

I went back and read Rachel Carson’s Silent Spring, which, although not directly concerned with a warming climate, illustrates our horrendous propensity over the past century to alter the chemistry of the planet in the most diabolical ways, from chemical fertilizers to toxic insecticides.

These are gruesome books, and taken together they made me start a garden for butterflies and bees, switch to organic produce, and go vegan at home (I stayed carnivorous in the wild, like a bear). But more importantly, as dark as they explained our current situation to be, these books sparked a simple revelation for me: we really haven’t been on this path that long. Not in global time. And if we changed the structure of human society so rapidly over the past few centuries, it stands to reason that we could do so again.

So I moved on to solutions. A quick library search uncovered a whole canon of optimistic takes on how we can mitigate the worst effects of warming. I powered through Gore’s sequel, Truth to Power, as well as Nobel Peace Prize-winner Paul Yunus’s A World of Three Zeros. I skimmed through Paul Hawken’s ranking of every known carbon capture solution in Drawdown (I won’t spoil it, but Number 1 isn’t as sexy as you’d think). Each book resounds with a determined hope in this cacophony of ideas, many of which also contribute to poverty reduction and wealth redistribution, which sounds downright utopian on paper.

But they also echo with a common refrain: we have the solutions, we just need the political will. Politics being what they are, that actually set my hope barometer back. I returned to the library shelves once more.

By this point, I was a little exhausted with nonfiction narratives, so I indulged a foray back to my literary roots in novels. I explored the emerging genre of cli-fi—speculative fiction about societies several decades into the very real future that scientists predict. I walked along a dystopian California coast with Octavia E. Butler’s heroine in Parable of the Sower, past lightning storms, frequent fires, and a scary set of drug-influenced pyromaniacs who are getting high on the world’s demise. I cheered on the survivors of a ravenous plague in Margaret Atwood’s The Year of the Flood, which I now use as a litmus test for friends who claim to read the books I recommend (if they don’t bring up the blue penises, I know they didn’t make it to the end).

I needed to relearn the history of the earth, to read through the enormity of the crisis we’re facing, and to see what steps we can take as we face what comes next.

Despite the horrors in these plots, overall I felt closer to what I wanted: a mental picture of how to be a human in a changing climate. Scary, right? But I’d jumped too far into the future. I needed to learn to live now, in the reality that we’ve already changed the planet, even before any of those worst-case scenarios come to pass.

I found those instructions in an unexpected place: local narratives written by environmental writers. I would have called it “nature writing” as a graduate student, along with “slow,” “boring,” and “meh.” But the more I read, the more I realized that nature writing is, and likely always has been, about as raw as it can get.

These writers cared deeply about particular places, deeply enough to know the names of every flower and tree and snail, and yet they refused to look away from their imminent destruction. From Rick Bass pleading for the protection of an undeveloped Montana valley in The Book of Yaak, to Lauren Groff wrestling with anxiety over the vulnerability of her home state in Florida, to Elizabeth Rush chronicling the erasure of the American shore with gasps of grief, each volume gave me what I needed. They gave me a place to stand in this new reality, where, as Rush describes, “My faith in natural processes, in the intricate systems of reciprocity that I was raised to believe keep nature from tilting out of balance, is lost.” It wasn’t a comfortable place, or even an optimistic place. But it was a place to be human, to be vulnerable, to fear and to mourn and to adapt at the same time.

I needed this space, and I think I needed the full journey to get to it. I needed to relearn the history of the earth, to read through the enormity of the crisis we’re facing, and to see what steps we can take as we face what comes next.

But especially as a work-from-home mom with two innocent faces smiling up at me every day, I needed to read the honest chronicles of others living through this moment with courage. I needed to sit with them in the deep hope from which the best books spring—the hope that we can save ourselves, and that we’re still worth saving.

I can’t say that my anxiety has fully abated. I still worry about my girls. I worry that they’ll blame me one day for not doing more to avert the crisis I knew was coming. But when I want to look away, I remember that there is no away anymore. I plant a few more seeds in our garden, which is more for bugs and carbon capture than anything.

It’s a small plot; the HOA of our subdivision in Summerville, South Carolina doesn’t permit much. But it’s enough that a lizard must have laid eggs on one of the okra plants because a brood of tiny green anoles showed up in July and have been surprising me on leaves ever since. Four bees stop by every morning to gorge themselves on the yellow luffa flowers, which bloom, wilt, and fall in a single day. I watch as closely as I can, careful not to disturb the daily rituals that carry a kind of peace, even though I know that today, each of them are heartbreakingly fragile. But I borrow the peace anyway and carry it with me until I water again tomorrow.

Elizabeth Putfark got her Masters in English studying literature of the American West. Her work has appeared in Earth Island Journal, American Cowboy, The Chronicle of the Horse, and elsewhere.

On Alma Mahler, Muse and Mistress of Fin-de-Siecle Vienna 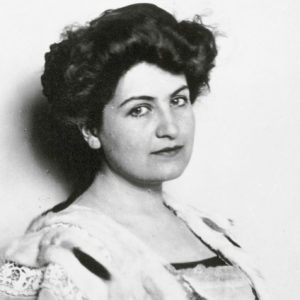 On Alma Mahler, Muse and Mistress of Fin-de-Siecle Vienna When Alma Mahler walked into a room, heads turned. Her magnetic presence and charismatic allure were like “an electric...
© LitHub
Back to top