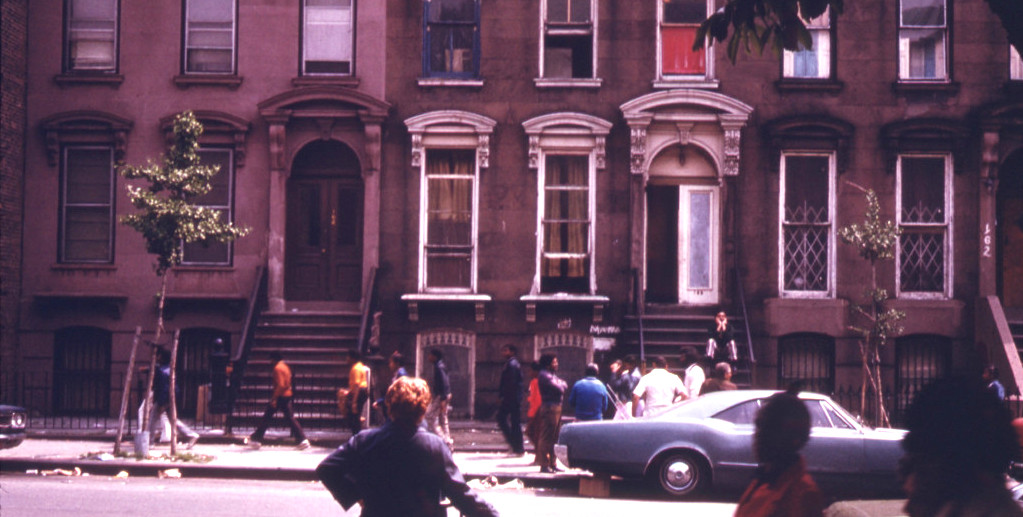 How the Oversimplified “Gentrification Narrative” Was Born

Bo McMillan on the Novels of L.J. Davis and What Certain Kinds of Stories Reveal About Cities

You know Lowell Lake. Or at least if you encountered him you’d probably find him a familiar nincompoop. He’s a person who moved to Brooklyn to find meaning for himself, back in the day when it was possible for someone to buy a brownstone for just tens of thousands of dollars. (Owners would have to expend similar or higher amounts for restoration, and of course, adjusting for inflation de-dramatizes the price.) His life had been bland and boring beforehand—TV dinners with the wife on the Upper West Side, climbing the corporate ladder at a plumbing trade publication. But one day everything changed when he skimmed an article to discover: “Creative young people were buying up houses in Brooklyn slums, integrating all-Negro blocks, and coming firmly to grips with poverty and municipal corruption. It was the stuff of life, it was the stuff he was looking for.”

He bought a house off Washington Avenue, filled with angry roomers and falling to pieces, and became obsessed with the idea of becoming a creative himself while restoring the 19th-century home. Now he cringingly raves about “soul food” in mixed company, talks incessantly about restoration, drinks too much, and feels a mix of pride and revulsion when co-workers call him “the guy who moved to Bedford Stuyvesant.” His wife leaves him. You could hardly write a better caricature of a standard “gentrifier” circa 2021, though this one—from L.J. Davis’s novel about Lowell Lake’s brownstone adventures, A Meaningful Life—was published in 1971. We love laughing at Lowell because he’s so damn easy to laugh at, and because in this day and age, when gentrification gets incessantly invoked to explain changes we might not care for in the places where we live (and featured in three times as many research articles as the more widespread phenomenon of evictions, per Matthew Desmond) he provides an outlet for all our frustrations about high rents and unaffordable neighborhoods.

As a student of 20th- and 21st-century neighborhood change, I’ve been interested in Davis’s suite of novels about New York in the 1960s and 1970s—there are four in total—because they provide some of the earliest templates for studying how current narratives of gentrification came into existence. They are also key to solving the puzzle of why those narratives typically discuss urban change only at the removes of history or caricature, via statements like “the neighborhood was so much better then [insert arbitrary time here],” or “check this Starbucks-sipping gentrifier” characteristic of the form. Brownstone literature like A Meaningful Life and the gentrification narratives that followed it do this, as Elizabeth Gumport has pointed out, to distance the author and comfort the reader from the fact that they have likely participated in the urban changes they outwardly revile.

More fundamentally, though, and more problematically, these narratives obscure an embedded, problematic logic of ownership that transcends standard property claims. This logic lies within the sense that only those who have the proper cultural vision, or cultural capital, can truly own belonging to a neighborhood. That authenticity is always arbitrary, entirely subjective, and empowers a small subset of people (many of them established writers) to draw roving lines around who can and cannot make claims to urban places. Not just “gentrifiers,” but frequently native residents, are propelled outside the ineffable enclosure.

Stuck at history’s and caricature’s removes, gentrification narratives do not ask what real city residents need in current contexts.

Gentrification narratives, and particularly those by white authors, fuel many of the exclusionary forces they claim to want removed.

The brownstoning movement in the 1960s and 1970s that Lowell participates in, though very small, formed the initial “back to the city” trend in New York City that became “gentrification” in the 1980s, waned in the 1990s, and then surged again in the 2000s. Davis himself was an active brownstoner, buying a home off Dean Street in 1965 for $17,000 and participating in the Boerum Hill Association that rebranded the neighborhood from its former status as working-class North Gowanus. (Jonathan Lethem, who grew up down the street from Davis and helped helped bring A Meaningful Life back to press in 2009, fictionalizes this in Fortress of Solitude.) Davis also frequently wrote about brownstoning in laudatory articles that bordered on self-congratulation. “Brooklyn people are not longer distinguished so much by ailanthus trees and a funny accent as by the sense they give that, alone of all the people in the city, they know what they’re doing,” he wrote in The New York Times in 1972. “In an era when the rest of the city seems to be collectively losing its soul, Brooklyn is recovering its own.”

The early brownstoning movement occurred initially in the absence of big capital. Due to underwriting standards that essentially punished cities and made banks unwilling to finance homes that cost more to repair than purchase, early brownstoners had to put large amounts of savings, ingenuity, and sweat into these residences. Combined with a recent shift in the urban zeitgeist (hats off to Jane Jacobs’s 1961 masterpiece The Death and Life of Great American Cities) that recast urban renewal as declining cities’ enemy rather than their savior, the set pieces were in play for brownstoners to claim roles as heroic underdogs. They were the little guys, reclaiming cities from decline and corrupt politicians. They were bringing power back to people and their neighborhoods. No need to notice that they had carved out new neighborhoods where ones hadn’t existed before (Boerum Hill, Carroll Gardens, Cobble Hill). Or the fact that most brownstoners were white, white-collar professionals like lawyers, professors, and writers, and that 98.3 percent of them earned incomes in the top quintile for the city, according to a survey documented in The Invention of Brownstone Brooklyn (2011).

Lowell blurted out “soul food,” brownstoners blurted about saving cities’ “souls.” To do this, a bait-and-switch had to be in order.

Davis wrote several elements of his own life into the character of Lowell. Both wrote about early Boise, Idaho (Davis grew up there), both lived in Manhattan before Brooklyn, and both attended high-powered universities—Stanford for Lowell, Columbia for Davis—en route to writing professions (Davis wrote for The New York Times and New York and was a Harper’s contributing editor). What A Meaningful Life means to establish between them, though, is that while Davis is a true brownstoner, Lowell is not one; he’s an exaggerated foil to authenticate Davis’s real-life belonging. Lowell’s boorishness does not allow Davis to fully achieve this alone, however. He has to have anchor people—or local characters—to fulfill the goal. So enter Lowell’s tenant neighbors and former roomers who antagonize him: a host of Black and Puerto Rican Brooklynites who almost never talk outside of jive, brownface broken English, or minstrelsy babble, and who mostly appear in the novel drunk.

Urban renewal turns Lowell’s Upper West Side neighborhood into a homogenous wasteland at the start of A Meaningful Life. Meanwhile, municipal corruption, but mostly these roomers and tenants, are clearly indicated to have run Lowell’s Brooklyn block into the ground. Race in Davis’s novel thus does an incredible amount of metaphorical legwork, none of it uplifting the dignity of the people of color most affected by urban decline and renewal. To quote from Hortense Spillers’s inimitable writing, in A Meaningful Life the raced body “becomes a defenseless target for rape and veneration…in its material and abstract phase, a resource for metaphor.” Nonwhiteness in the novel becomes urban decline, becomes blight, becomes the mythical stereotype of welfare queens (a figure who abounds in Davis’s fiction and journalism), becomes the metric proof that some white people are less cut out for cities than others. It accumulates all the problematic and objectifying symbolisms race has previously appreciated in urban narratives, and adds yet another—authentic local “grit”—on top.

This forms the crux of the great bait-and-switch in brownstoning literature, where the subtext might read as follows: “Only good renters and people of color, and those who truly understand and are invested in the city (i.e. cultured homeowners) can rescue it from big bad transformation.” Erased in such narratives seeking to “preserve” the city from development and large, overreaching government was the fact that many Black and Puerto Rican neighborhood associations, institutions, and homeowner groups who organized against urban renewal, and who arguably saved the city from total collapse through in-migration, often fought for goals opposite of those espoused by brownstoners as being “good” for all the city. In the wake of de-industrialization, municipal jobs were a key source of income for people of color. In Black neighborhoods that had faced decades of redlining, residents had to rely on public housing and city intervention because private markets did not serve them. “Preservation” meant maintaining an unacceptable status quo. Racial inequality in cities, like its relative of neighborhood-level inequality, is and was historically “authentic.”

This raises a question: When we fight to “preserve” a city, who are we preserving it for?

The great irony of narratives that have nevertheless carried over from the brownstone era, and that argue for the need to preserve the city from new development and caricatured “gentrifiers,” is that both things actually make it harder for non-wealthy people to live here. For those who already do live here, and especially brownstone homeowners, we’re preserving single-family fortunes for the sake of local “character.” In 2009, Davis sold his home for $2 million. The great bait-and-switch has worked.

Stuck at history’s and caricature’s removes, gentrification narratives do not ask what real city residents need in current contexts. It isn’t necessarily preservation. It isn’t more luxury buildings. And it certainly isn’t “grit” or “grime,” words that authors whose careers rely on trumpeting NYC’s death-by-gentrification love tossing out like BeDazzling rhinestones. At this point, instead, a new call has been issued demanding “development without displacement.” This vision would be novel, would have little precedent in history, and would have to be concrete in order to work. That’s why we have to understand where “gentrification” narratives come from, so that we can supplant the form’s shortcomings to imagine better cities for the future. As I’ve argued elsewhere, gentrification has essentially become a meaningless term.

Bo McMillan is a Ph.D. candidate at Columbia University writing a dissertation on narratives of neighborhood change in the 20th and 21st centuries. His work on housing, urban culture, urban history, and neighborhood change has been published or is forthcoming in Shelterforce, Public Books, The Avery Review, American Literature, City, Journal of Urban History, and The Chicago Review. 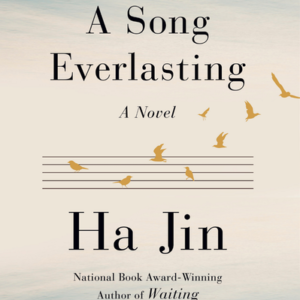 In late may, as the twentieth anniversary of the Tiananmen massacre was approaching, the Chinese government prepared by beefing...
© LitHub
Back to top