When first-time novelist Charles Webb gave birth to The Graduate in 1963, he had no trouble admitting that his leading character was modeled after himself. Not that he had personally enjoyed a steamy affair with his father’s law partner’s wife. Nor had he busted up a wedding-in-progress in order to save his own true love from a questionable marriage to someone else. But Webb, who died of complications from a blood disorder on June 16th at the age of 81, saw Benjamin Braddock (the character indelibly brought to the screen by Dustin Hoffman in 1967) as a reflection of his own wants and needs. He too was a recent college graduate (Williams ’61) puzzling over his plans for the future.

Generations who’ve cheered for Ben and Elaine aboard that bus at the close of the megahit film have debated what lay down the road for the pair. What if Benjamin Braddock, having rescued Elaine from marriage to a well-connected frat boy, had concluded that society’s rules were not for him? What if the two of them had decided, on principle, to reject money, possessions, conventional values, and every other aspect of middle-class society? In other words, what if the Benjamin Braddock so many of us know and love had gone on to live Charles Webb’s adult life?

Charles Webb, it seems, got off the bus in a big way. Though born into comfortable circumstances and assured—on the strength of the film’s huge box office—that attention would be paid to his future literary efforts, he did everything in his power to thumb his nose at the status quo. When he married college sweetheart Eve Rudd (who later changed her name to Fred in sympathy with men of low self-esteem), he insisted they sell back their wedding gifts to the original givers. (He later explained this quixotic gesture by saying that he hadn’t wanted the presents to own him.)

With Fred’s apparent consent, he chose to make a practice of giving away worldly goods. His earnings from the sale of The Graduate’s screen rights to producer Lawrence Turman may have been modest, but the film’s success led to a paperback edition that was a publishing bonanza for Webb, until he decided to hand over his royalties to the Anti-Defamation League.

As Webb spelled it out to a somewhat mystified journalist, “Though neither Fred nor I are Jewish, we gave the rights to the ADL because we felt they had influenced us in a profound way, to understand prejudice in all its forms and victims.” Similarly, the two developed the habit of buying and then quickly shedding houses and works of art. In 1970, the movie sale of Webb’s The Marriage of a Young Stockbroker enabled them to buy an 11-room mini-mansion in leafy Williamstown, Massachusetts. After a few short weeks, they gifted their new home to the Audubon Society and moved on.

In 1988 a stunning piece in People . . . described Charles Webb and his wife Fred living out of a Volkswagen van along with the mutt they’d dubbed Mrs. Robinson.

It’s not easy to parse Webb’s mania for giving away possessions. This seems to have been one part liberal guilt, one part restlessness, one part a determination to veer away from the conventional path. In any case, the Webbs and their two sons roamed the country, living at various times in trailer parks, a Motel 6, and other temporary shelters, while taking on odd jobs (some of them very odd indeed) for income. More and more, they were starting to depend on the kindness of strangers.

In 1988 a stunning piece in People, subtitled “Footloose, Fundless, Looking for Help,” described Charles and Fred living out of a Volkswagen van along with the mutt they’d dubbed Mrs. Robinson. They’d just been booted out of a housing arrangement with a woman in Bethel, Connecticut, who disapproved of their penchant for nudism. Belatedly, Fred was growing worried about their dire financial straits, saying, “I guess we thought that because we were so generous, the world would come to our aid if we needed it. I guess we were naïve.”

It was around this time that the Webbs decided to pin their hopes on a move to England. Though still scrounging for basic necessities, they continued to donate their occasional windfalls to others. One example: the local artist who—having received the equivalent of $20,000 from yet another Webb film deal—briefly attracted attention in 2003 when he mailed himself to London’s Tate Museum in a packing crate.

Charles and Fred were also there to cheer when their younger son David contributed to the British fine arts scene by publicly cooking and eating a copy of The Graduate, garnished with cranberry sauce. The book’s enduring fame, it seemed, was ripe for such self-satire.

Generations of fans have assumed that Ben and Elaine, after sorting out her tangled legal status, will get married and settle into domesticity. Webb clearly made the same assumption in 2007 when, at long last, he published a sequel to The Graduate, titled Home School. It portrays a middle-aged Ben and Elaine raising two children while alternately courting and fending off the interference of Elaine’s mother, the notorious Mrs. Robinson. This poses the question: what did Webb himself think of marriage as an institution?

Early on, it seems Webb’s views were largely traditional. To the surprise of critic Stanley Kauffmann, then writing for the New Republic, Webb contacted him in 1968, deeply upset that the film version of his novel had shown Ben rescuing Elaine from her new husband seconds after the minster had pronounced them husband and wife.

Webb’s message to Kauffmann was a passionate insistence that “in the book the strength of the climax is that [Ben’s] moral attitude makes it necessary for him to reach the girl before she becomes the wife of somebody else, which he does. In the film version, it makes no difference whether he gets there in time or not. As such, there is little difference between his relationship to Mrs. Robinson and his relationship to Elaine, both of them being essentially immoral.” (In the pages of the New Republic, Kauffmann expressed total bafflement that “the author of this novel, even though possibly upset at being brushed off in all the furor about the film, can equate morality with marriage-licenses so absolutely.”)

Many cinephiles to whom I have spoken seem convinced that Benjamin Braddock would ultimately have a bright future.

Some four decades later, in an email to film historian Mark Harris, Webb backed away from his own argument about the sanctity of marriage, admitting that “I cringe at the quote. . . . Was I really that priggish? Yes, I suppose I was.” But in the interval between 1968 and 2008, Webb and Fred clearly re-thought their own views of marriage as a moral force. In 1981 they divorced, variously explaining this act as a show of solidarity with gay people who could not legally wed or as a protest against the inequality of women in wedlock.

Still, theirs was apparently a genuine marriage of true minds: despite the severing of their legal ties, they never lived apart. They remarried in 1998 so as to smooth their immigration to England, and remained inseparable, despite Fred’s severe 2001 mental breakdown that at one point had them getting their mail at a Salvation Army shelter. (Fred died in 2019.)

Ben and Elaine seem to foresee, at the end of The Graduate, a life filled with possibility. I suspect that the Webbs, at the start of their life together, felt the stirrings of that same sense of adventure. There are those, watching the Mike Nichols film, who suspect the young couple on the bus are headed for trouble. But many cinephiles to whom I have spoken seem convinced that Benjamin Braddock would ultimately have a bright future.

Said one, decisively, “He’s got a college education, he’s a smart guy, he got the Halpingham award. And a beautiful woman at his side—he’ll do okay. I’m sure he went into plastics.” Charles Webb began his adult life equally blessed, but his determination to turn away from plastics in all its forms led him to a very different lifestyle. As he told the Los Angeles Timesin 2008, “The penniless author has always been the stereotype that works for me. . . . When in doubt, be down and out.” And so, despite all his gifts, at the end of his life that’s exactly what he was.

Still, by all accounts he was a kind and creative man. When working on my 2017 book, Seduced by Mrs. Robinson: How The Graduate Became the Touchstone of a Generation, I tried hard to track him down. But the reclusive Webb proved difficult to find, and because I knew of his tendency to steer clear of the press I eventually quit trying.

I later learned that he had sought out my book and had given it his own idiosyncratic endorsement. Here’s the message that came back to me via a rare Webb correspondent: “I was able to get ahold of Seduced By Mrs. Robinson, and found it generally accurate, if unflattering.” Quite so, I hope.

Beverly Gray is the author of Roger Corman: Blood-Sucking Vampires, Flesh-Eating Cockroaches, and Driller Killers, Ron Howard: From Mayberry to the Moon . . . and Beyond, and Seduced by Mrs. Robinson: How The Graduate Became the Touchstone of a Generation. 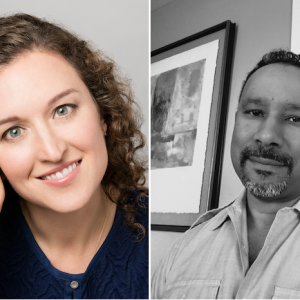 In this episode, acclaimed author and pulmonary and critical care specialist Daniela Lamas and celebrated poet and radiation...