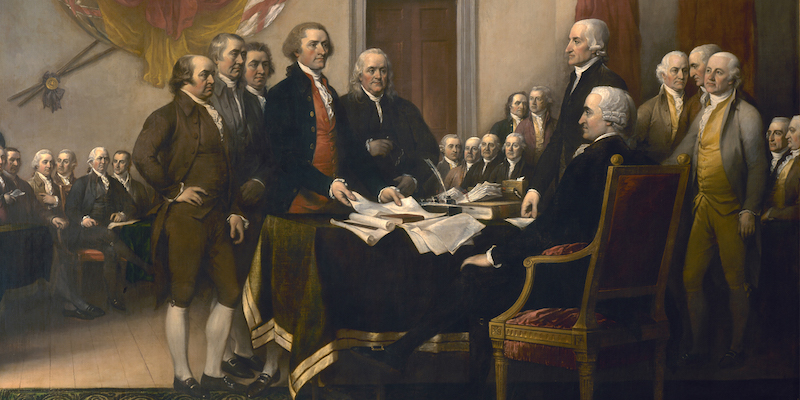 How Slavery Was Written Out of the Declaration of Independence

Thomas Jefferson and his bride, Martha, were honeymooning at his Albemarle County farm in 1773 when they received word that Martha’s father had died. As her one-third share of John Wayles’s fortune, Martha Jefferson inherited eleven thousand acres in five counties, along with 135 slaves. Her father left some £30,000 in assets, but he also left £10,000 in debts to British merchants, including a recent consignment of slaves who could not be sold under the Association boycott. Of the balance, Thomas Jefferson was to receive £6,600 (roughly $1.5 million today). He also held his father’s shares in the Loyal Company, rival to the old Ohio Company, which he had acquired after surveying the Shenandoah Valley.

It was enough money to make Jefferson feel he could afford a life of comfort, and at last he believed it was safe to abandon his never-profitable law practice. In June 1774, Jefferson ran an ad in the Virginia Gazette chastising “the unworthy part” of his law clientele who had not paid their bills. After six years of fruitless drudgework, he had been paid only £797 of the £2,119 he was due. At age thirty-one, Jefferson walked away from the courtroom.

Instead, he decided to devote himself to a life of researching history and international law, writing political philosophy, and improving his landed estates. Atop his mountain, he began to write A Summary View of the Rights of British North America.

A neophyte burgess from the westernmost county, he took it upon himself to draw up instructions from the Virginia Convention to its delegates in the First Continental Congress. Couched in the terms of resolutions, he offered for the first time a detailed compendium of America’s grievances against king and Parliament. Jefferson sent a copy to Patrick Henry, but Henry apparently never read it. The copy Jefferson dispatched to Peyton Randolph, presiding over the convention, met a better fate. Randolph “laid it on the table for perusal.”

Some of Jefferson’s admirers put his Summary View through the press in Williamsburg. Before the end of 1774, it was reprinted in Philadelphia and read by members of the First Continental Congress, then reprinted twice anonymously in London, where Jefferson overnight became known as the most radical writer in America.

As historian Pauline Maier put it, A Summary View became the first sustained piece of political writing that subjected the king’s conduct to direct and pointed criticism. Jefferson’s writing ability was so well known to the Continental Congress by the time he was elected in 1775 that, when he arrived in Philadelphia, one of the youngest delegates at only thirty-three, Samuel Ward of Rhode Island, greeted him as “the famous Mr. Jefferson.”

When the committee appointed to draw up the declaration met, it voted that Jefferson should be its draftsman. To rivet the attention of the Declaration of Independence’s intended audience—the free populace of the thirteen mainland British colonies—Jefferson laid out his major premise: that the step America was taking was necessary, coming reluctantly after many attempts at reconciliation.

Jefferson overnight became known as the most radical writer in America.

Asserting the rule of right reason that philosophers since Thomas Aquinas had taken volumes to argue, Jefferson plunged on to posit the doctrine at the heart of the English revolutions of the seventeenth century, that, as John Knox had put it, “resistance to tyranny is obedience to God.” Steering clear of overt antagonism to the idea of kingship of what was sure to be scrutinized throughout a world ruled by monarchs, Jefferson contended that Americans had the right to revolt against a bad king, a tyrant.

In language usually reserved for common criminals, he enumerated eighteen charges intended to prove George III had been guilty of tyranny over his American colonies.

In effect, Jefferson was drawing up a bill of indictment against the king. If he could prove his case, there would be no question that Americans had to renounce their allegiance to a wicked ruler and that, therefore, “these United Colonies are and of right ought to be free and independent states.”

At the top of the list of America’s grievances, Jefferson placed the American colonies’ lack of their own currency. He asserted that the king “refused his assent to laws the most wholesome and necessary for the public good.” In both draft documents, Virginia’s Declaration of Rights and the Continental Congress’s Declaration of Independence, Jefferson was referring to the Currency Act of 1764.

In all his harsh indictments of the king of England, Thomas Jefferson, owner of at least 140 slaves, reserved until last his strongest language, blaming George III personally for the slave trade:

He had waged cruel war against human nature itself, violating the most sacred rights of life and liberty in the persons of a distant people who never offended him, captivating and carrying them into slavery in another hemisphere, or to incur miserable death in their transportation thither.

This piratical warfare, the opprobrium of infidel powers is the warfare of the Christian king of Great Britain. Determined to keep open a market where MEN should be bought and sold, he has prostituted his negative for suppressing every legislative attempt to prohibit or restrain this execrable commerce.

In every British American colony, slavery was legally protected. In most of largely rural New England, the enslaved made up a small percentage of the population and were economically insignificant.

But Rhode Island, where merchants such as delegate Stephen Hopkins were actively involved in the international slave trade, had a higher percentage of slaves than any other colony in New England. Newport had become the most lucrative slave-trading port in North America. Its merchants, according to historian Allison Stanger, had sponsored at least 934 voyages to Africa, and its ships had procured at least 106,544 people to sell in North America: fewer than half had survived the passage.

The farther one travelled in the South, where slavery was more important to the economies of the colonies, the greater the percentage of the population laboring in slavery: Maryland, 32.8 percent; Virginia, 41 percent, North Carolina, 33.7 percent. In South Carolina, at 53.9 percent, enslaved blacks outnumbered free whites.

The records of slave ownership among the delegates are incomplete, but the percentage of ownership seems to exceed the proportion in the colonies they represented: the delegates were drawn from the wealthier ranks of society.
Every delegate from Virginia, Maryland, and North and South Carolina owned slaves, most of them in large numbers. With the exception of Christopher Gadsden, a merchant, all the South Carolina delegates owned hundreds of slaves; Henry Middleton held eight hundred. Among Virginians, George Washington, Richard Henry Lee, and Benjamin Harrison each had two hundred or more enslaved people. Patrick Henry’s slaveholdings would eventually increase from thirty in 1774 to one hundred.

Among the New England delegates to the Second Continental Congress, two—John Hancock and Stephen Hopkins—owned slaves. In the Middle Colonies, the New Yorkers had a few house slaves. Pennsylvania delegate John Dickinson had publicly opposed the institution and was in the process of freeing his slaves; Benjamin Franklin owned one house slave and a slave valet.

After Franklin and Adams and the entire committee approved Jefferson’s draft, they delivered it to President Hancock. For the next three days, Congress dissected every article Jefferson later wrote that he was stunned by his colleagues’ “immediate” agreement to cut out entirely his condemnation of the African slave trade. Any reference to slavery “was struck out in compliance to South Carolina and Georgia, who had never attempted to restrain the importation of slaves and who, on the contrary, still wished to continue it,” Jefferson wrote. Leading the protesters was the youngest delegate, twenty-six-year old Edward Rutledge of South Carolina, owner of eight hundred slaves.

Jefferson recorded his astonishment at how quickly “our Northern brethren” acceded to Southern objections. Among them were two land-rich New York delegates.

The records of slave ownership among the delegates are incomplete, but the percentage of ownership seems to exceed the proportion in the colonies they represented.

The other land-rich delegate from New York was Robert L. Livingston, the son of Robert R. Livingston, the chief justice of the Supreme Court of Judicature of New York Province, who had assembled the 166,000-acre Livingston Manor, which stretched twenty miles along the eastern bank of the Hudson River, garnering rents from 285 families of first-generation Scottish tenant farmers. As his heir, Livingston could expect to receive a royal land grant of nearly one million acres. Independence from Britain would cost him this lucrative grant. Among his cousins were many of the wealthy and powerful land barons of the Hudson Valley who, collectively, owned four million acres of New York and New Jersey farmland that not only fed New York City but shipped exports all over the Atlantic world. To the slaveholders of the South, there was little difference between the plantation owner and the land baron of the North who collected rents from threadbare tenant farmers.

Throughout three excruciating days of editing, Jefferson sat beside Franklin, “who perceived that I was not insensible to these mutilations.” Jefferson later wrote little about the hack-and-slash editing, merely sending off to Richard Henry Lee in Williamsburg a copy of his draft declaration along with the version edited and approved of Congress.

Jefferson didn’t take public credit for writing the nation’s first and arguably most famous foundation document, because he was not proud of it. Disappointed that he had played no important role in writing the new Virginia constitution, smarting from the thorough vetting of his draft Declaration, Jefferson decided to quit Congress—to him only a temporary meeting of delegates from the British colonies. Far more important to Jefferson was the reshaping of weak old English colonies into strong independent states.

John Adams took quite the opposite view. Once again disregarding the embargo on congressional correspondence, he wrote jubilantly to Abigail that the day of the signing of the Declaration of Independence “will be the most memorable epoch in the history of America.” He predicted that it would be “celebrated by succeeding generations as the great anniversary festival.” It was “the Day of Deliverance” that ought to be solemnized with “pomp and parade, with shows, games, sports, guns, bells, bonfires” all over North America “from this time forward forevermore.”

As if that were not elegy enough, in a second letter, Adams wrote that in a few days Abigail would see “a Declaration setting forth the causes” of “this mighty revolution” that would “justify it in the eyes of God and man.” Adam saw the hand of God in the birth of the new nation. It is the will of God that the two nations should be sundered forever.”

The contrasting reactions of Jefferson and Adams to their declaration of independence from Great Britain foreshadowed a rift that would only widen over time. Jefferson saw Virginia as his country; Adams considered each state part of a new nation. 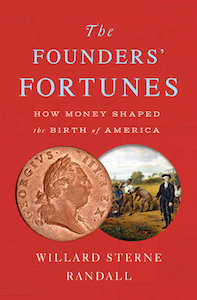 Willard Sterne Randall is a Distinguished Scholar in History and Professor Emeritus at Champlain College. Prior to academia, he worked for seventeen years as an investigative reporter—during which he garnered the National Magazine Award, the Hillman Prize, the Loeb Award, and the John Hancock Prize—eventually pursuing advanced studies in history at Princeton University. As a biographer and lecturer, he specializes in the history of the Founding Era. 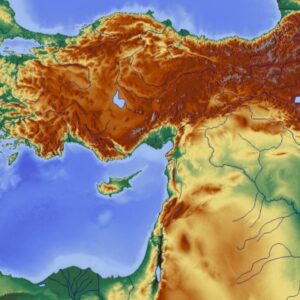