How Saul Bellow Reckoned with Money and Fame

The launch party for Saul Bellow’s Herzog was held on September 22, 1964, two days after Julian Moynihan pronounced the novel “a masterpiece” on the front page of The New York Times Book Review and Philip Rahv called Bellow “the finest stylist at present writing fiction in America” in a review in the New York Herald Tribune Book Week. Alfred Kazin was among the guests at the launch, and while waiting for his wife to arrive he amused himself by picking out “the customers for Saul’s party from the regulars at 21 was so easy!” The regulars were better looking, stamped with the difference of their background deeply depressing. In they came, “Arabel Porter all the old loves, would-be loves, friends and misses—even Vassiliki [Rosenfeld]. All so stale, isn’t bloody familiar?” Only Bellow impressed:

Saul, our plebeian princeling and imaginative king, standing there, gray, compact, friendly and aloof, receiving his old friends whom he had invited to 21 . . . Saul alone of all the old gang has achieved first-class status. . . . Saul alone has made it, with the furious resistance of personal imagination to the staleness of the round. There’s more yet for me, he cries in his heart, more, much more! Nothing is stale, he cries, if only you look at it hard enough, see in it aspects of human fate in general. Put your story on the universal stage of time, and the old Chicago friends will seem as interesting as kings in the old history books.

Two days earlier, when the first reviews of Herzog appeared, Kazin had pondered Bellow’s public persona. The face he presented to the world, Kazin decided, resembled Charlie Chaplin’s “in that first photograph of the tramp—the face absolutely open to life, open, humble, almost childlike, in its concentrated wistfulness and naïve expectancy. Above all a face submissive to the fates.” This face, Kazin imagined, was worn by Herzog, and “Saul himself now wears [it] in company. He sits in the waiting room, prepared to be ushered into anything. What will you do with me? he asks, recognizing a stronger power than himself.” Kazin admired Bellow’s air of containment, expectancy, passivity, but also found it irritating. “Saul now wears an aspect mild and submissive,” he writes in a journal entry of September the book was published. “He puts his ear willing to anything to say to him. He is available to you, he is interested in you, he is most polite. But the minute he has registered what turns it into food for thought—and you find yourself sacrificing your thought for the pleasure of having him develop it. Later, in a journal entry of August 1, 1965, Kazin complains of “Saul’s usual trick of having others make the effort, his immobility in company. . . . Saul is in an interesting state of self-consciousness, of course, because of his present fame and fortune. Having worked so long to make it, he now is suffering even more than usual because he has. He intimated, making almost a physical point of it as usual, that he sought anonymity. . . . He was, as usual, making mental lassos of everyone to himself. And I was tired of adjusting to him.”

“Saul alone of all the old gang has achieved first-class status. . . . Saul alone has made it, with the furious resistance of personal imagination to the staleness of the round.”

Within a month of publication, Herzog was number one on the best-seller list, supplanting John le Carré’s The Spy Who Came In from the Cold. Money began rolling in. New American Library purchased the paperback rights to Dangling Man and The Victim for $77,000 and Fawcett paid $371,350 for the paperback rights to The Adventures of Augie March and Herzog. “Guys, I’m rich,” Mitzi McClosky remembers Bellow declaring. “What can I get for you? Can I buy you something? Do you need any money?” On October 30, Sam Goldberg, his lawyer friend, wrote to Bellow to ask what he should do about the manuscript of Augie. “I am sitting with a $25,000 manuscript. I have no safe here which can hold it. . . . Are you going to dispose of the manuscripts this year or are you saving it for 1965”—for tax purposes, that is. On November 18, Bellow received an invitation from Mark Schorer, of the English Department at Berkeley, to teach one course for one semester and deliver two public lectures, for a fee of 12,000 dollars. He turned it down. In December, he donated the Augie and Henderson manuscripts to the University of Chicago and turned down a 5000 dollar award from The Kenyon Review, in both cases because of taxes. He donated Tivoli, the ramshackle house he’d bought in 1956, to nearby Bard College, including the household contents: washing machine, refrigerator, walnut dining table, hi-fi, garden furniture, gas rotary lawn mower, garden tools. Meanwhile, the University of Chicago raised his salary to 20,000 dollars. Henry Volkening, his agent, negotiated offers for the film rights to Henderson (as did Sam Freifeld, to Volkening’s consternation). “Don’t laugh,” wrote Volkening to Bellow on March 24, 1965, “but Peter Sellers is among the other stars with whom it is being discussed.” There were also inquiries about Herzog. Robert Bolt, Richard Burton, and Fred Zinnemann were interested in filming the novel; Zinnemann suggested that Harold Pinter write the screenplay.

Bellow was kept advised of all these matters in lengthy, at times weekly, letters from Volkening. Throughout the 1960s, he himself was advising foundations and institutes: Yaddo, the Rockefeller, the Guggenheim, the Longview (from Texas, administered by Harold Rosenberg), the Ford, the Salk, the National Institute of Arts and Letters, the Peace Corps, the Princeton University Department of Philosophy. On January 21, 1965, Volkening wrote to Philip Heller of Heller, Strauss and Moses, a Chicago accounting firm, listing payments made to Bellow in 1964 (royalties, serial rights, foreign rights, movie options, etc.). They amounted to $121,682.91 gross and $109,447.22 net. His 1966 tax return reported income of $140,000 (estimated by James Atlas at “about $800,000 in today’s terms”), a figure nearly matched in the returns for 1967 and 1968. On February 19, 1965, Bellow wrote to the poet Stanley Burnshaw about his newfound prosperity: “In my simplicity I thought the noise of Herzog would presently die down, but it seems only to get louder. I can’t pretend it’s entirely unpleasant. After all, I wanted something to happen, and if I find now that I can’t control the volume I can always stuff my ears with money.” In March 1965, Herzog won the National Book Award, which Bellow had previously won for The Adventures of Augie March. Also in March, Volkening and Denver Lindley, of Viking, put Bellow up for membership in the Century Association. As money, honors, and front- page profiles accumulated, even his brother Maury took notice. “The kid finally did it,” he declared. On November 15, 1964, at the end of a typed single-spaced letter devoted to money and business, Henry Volkening apologized and offered advice and reassurance. “Adjustment to success, though less harrowing than adjustment to shall we say figuring out how to ‘get along,’ does nevertheless pose its problems, does it not? But look, I know how these things distract you from things you want to think about. . . . And I’ll do my level best to minimize them, and have them be a benefit.”

“After all, I wanted something to happen, and if I find now that I can’t control the volume I can always stuff my ears with money.”

Money and its management were distractions for Bellow, but they were also ways of connecting to his brothers and sister. Now Bellow could enter into family business discussions—if not as an equal, at least as a participant. Volkening cautioned Bellow against getting involved in the market (“You have earned all of this big money the hard way,” he wrote on May 19, 1965; “it is very much easier to lose money than to increase it”), but when Bellow began to dabble, he put him in touch with his brother, a stockbroker. Now Volkening’s letters contained stock tips as well as news of contracts and foreign sales. This was the period when Lesha, Bellow’s niece, began to hear him utter the phrase “Vu bin ikh?” (“Where am I in this?”) when deals and investments were discussed at family gatherings. He hired a Wall Street stockbroker and a prominent Chicago lawyer, Marshall Holleb, who was involved in real estate and property development. Because Bellow never fully engaged with business affairs, he was never very good at them, alternately too trusting or not trusting enough, impatient, shocked at setbacks. After almost 50 years of hard work and money worry, he found it difficult to accept the realities of prosperity. When Robert Hatch, an editor of The New Republic, met him in the summer of 1965, all Bellow could talk about was taxes. He had just written a check for 40,000 dollars to the Internal Revenue Service. When David Goldknopf, an old acquaintance, asked Bellow about acquiring an agent, he recommended “a young woman named Candida Donadio” from Volkening’s office, later an important agent in her own right; Volkening himself, like Bellow, was “overbusy, all too successful and risen into the nirvana of the harassed.” When not harassed about money, Bellow glowed with success. Mitzi McClosky remembers him after Herzog as “like a phoenix. The earlier Saul had disappeared. He was on top of the world.” 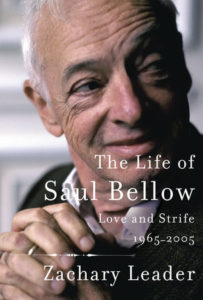 Zachary Leader is professor of English literature at the Uni­versity of Roehampton in London. In addi­tion to teaching at Roehampton, he has held visiting profes­sorships at Caltech and the University of Chicago. He was educated at Northwestern University; Trinity College, Cam­bridge; and Harvard University; and is the author of Reading Blake’s Songs, Writer’s Block, Revision and Romantic Authorship, The Life of Kingsley Amis, a finalist for the 2008 Pulitzer Prize in Biography, and The Life of Saul Bellow: To Fame and Fortune 1915–1964. He is a Fellow of the Royal Society of Literature and General Editor of The Oxford History of Life-Writing, a seven-volume series. His latest book, The Life of Saul Bellow: Love and Strife 1965–2005, is available from Knopf. 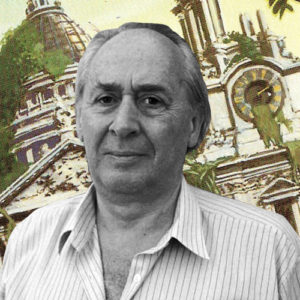 J.G. Ballard was an extraordinarily prolific writer, and for the majority of his career he managed this while also being...
© LitHub
Back to top
Loading Comments...