Cathy O'Neil on Hopi Traditions of the “Shame Clown”

Tell friends you’re researching a book about shame, and you’ll hear the saddest stories. This has been my life for the last few years. I’ve heard about every shade and flavor of it: zit shame, sex shame, math shame—dark memories dredged up from the high school locker room, humiliations at the hands of camp counselors, doctors, star quarterbacks. They flow together in my mind, into an enormous, communal underground pool of dread and pain, much of it brutal. It’s hard to look at and even harder to make sense of.

But one evening, when the subject of shame came up, a friend of mine who’s an art history professor offered something entirely new. “Have you heard of the Pueblo clown society?” she asked. I hadn’t. And so she told me about a shaming ritual in the Pueblo nations in New Mexico and Arizona. In one case she described, clowns’ bodies are painted with black and white stripes made from clay. Their hair, parted in the center, is bound in two bunches, which stand upright on each side of the head and are also encased in clay. The headpieces are trimmed with corn husks.

These rituals have many layers of meaning, she explained. They’re tied to religion, and it’s such a sensitive subject that participants are discouraged from discussing it with outsiders.

I followed up with Peter Whiteley. He’s the curator of North American Ethnology at the American Museum of Natural History in New York, and much of his anthropological research has focused on the traditions of the Hopi. This tribe has lived in northeastern Arizona for a millennium in fixed settlements, which is why the Spaniards, when they arrived in the 16th century, included the Hopi as one of the peoples they called Pueblo, the Spanish word for town.

The function of the shame clowns, Whiteley says, is to reinforce the norms and ethical standards of the community. In seasonal ceremonies, which extend over two days, the clowns dressed in claystriped costumes perform in a plaza surrounded by community members. The premise is that they are children of the sun who come into the ceremony with no knowledge of society or human morality. In some of their early skits, they seem depraved, shattering the rules of decency and decorum. They eat filth from the ground, steal from one another, simulate sex. Since they don’t know the rules, anything goes. But over the following day and a half, their understanding advances, and they seem to acquire the basics of ethical behavior. In short, they are taught to be more Hopi.

In the process, they teach people about what’s acceptable, what isn’t. “They are the great commentators of the world,” says Whiteley. “They’ll call out transgressive behavior.” And for this they employ shame.

In one ceremony Whiteley recalls from the 1990s, the clowns acted like comical drunks, staggering and throwing bottles around as they ridiculed a bootlegger, a man known as Cricket, who was selling liquor within the community, which violated an established rule. The alcohol he supplied was a poison developed by outsiders, and it endangered the health of the tribe. The shaming Cricket received was intense, Whiteley says. “He must have had pretty thick skin.” It sent a sharp message not only to him but to the entire group. Someone thinking about bootlegging would now think twice.

How the Pueblo clowns taunt their targets tells us something about the role of shame in society. It can be healthy, even kind (once you get past its sharp edges).

The clowns’ shaming of community members doesn’t end with the laughs and jibes. Later in the ceremony, both the clowns and their shamed targets can receive formal forgiveness. With that, the shamed return to the tribe in good standing—though always aware that the others will be keeping an eye on them.

A day or two of ridicule and then redemption. This was pretty tame stuff compared to the dark and painful stories I’d been hearing about. And next to my own lifelong battle with fat shame, it seemed like coaxing rather than bullying. The Hopi ceremony, as Whiteley described it, doesn’t tell the transgressors that they’re bad people, or losers, only that they need to make a course correction.

How the Pueblo clowns taunt their targets tells us something about the role of shame in society. It can be healthy, even kind (once you get past its sharp edges).To understand what’s so healthy about it, let’s take a look at an altogether different variety.

Ever heard of bingo wings? The term comes from Britain, where bingo is an after-dinner staple in retirement homes. When a woman wins, she’ll shout BINGO! Raising her winning card high, she typically waves it eagerly—and this is where the scrutiny begins. Her movements draw attention to her arm, especially the upper part of it, where in many cases a jiggling pocket of loose fatty skin sways back and forth. That is a bingo wing in action. To the judgmental mind, it represents ugliness, which generates shame. It’s also associated with another powerful source of shame, old age, and linked with women, who suffer far more body and age shame than men. Plenty of class shame also oozes to the surface. Rich people, after all, rarely play bingo, an activity popular with the middle and lower classes—folks so thrilled to win a prize that they wave their arms madly, exposing their bingo wings.

The cosmetic enhancement industries thrive on body shame. In their messaging, they make it all too clear that bingo wings, also known as “bat wings,” are gross, something people should hide with long sleeves until they can excise them with surgery. This viewpoint, which feeds their business, is echoed throughout society, from morning TV shows and infomercials to grooming websites. It is so pervasive that many of us take it as gospel. “Unless you fly around at night catching insects,” says Blue Hare, a lifestyle magazine for older women, “no one needs or wants bat wings. So what causes them and what can you do about them—realistically?” The answer is to eliminate these unsightly appendages. The cost for the surgery, known as an arm lift, or brachioplasty, averages about $5,000 per arm.

As I see it, the Hopi ceremony and bingo wings illustrate two contrasting faces of shame. The Hopi shame clowns send signals to members of their community, using gentle ribbing to enforce cultural norms. In the case of Cricket, the alleged bootlegger, they’re saying, “Don’t poison us. Stay true to the enduring values of our tribe.”

The people they mock remain members of the community. The others know and care about them. They check on their progress and steer them away from their transgressions. Their shaming targets what people do, not who they are.

The Hopi’s shaming targets what people do, not who they are.

Shame is a policing tool, and it has been one since the first clans of humans roamed the savannas of Africa. According to evolutionary psychologists, shame—much like pain, its first cousin—shields us from harm. Pain protects our bodies, teaching us to watch out for fires and sharp blades, and to run away from angry hornets. Shame represents another dimension of pain. It is administered by a collective whose rules and taboos are etched into our psyches. Its goal is the survival not of the individual but of the society. In this sense, shame is borne of the conflict between an individual’s desires and the expectations of the group.

Shame, by definition, is something we carry inside. It’s a feeling, one derived from a norm, whether of body, health, habits, or morals. And when we sense that we’re failing to meet these standards, or when classmates or colleagues or Super Bowl advertisements make these departures all too clear, shame washes over us. Sometimes it just feels bad. But the damage can run much deeper, hollowing out our sense of self, denying us our dignity as human beings, and filling us with feelings of worthlessness. Shame packs a vicious punch.

Stigma, another one of shame’s close cousins, is a mark that we wear on the outside. It is a signal to the rest of society that this person misbehaves or is intrinsically abominable. Sometimes a stigma is carried as a physical indicator, like a dunce cap. Other times a single word will suffice, branding a person as an addict or a felon.

Shame and stigmas enforce taboos. And some of their work, from an evolutionary standpoint, makes sense. The shame of incest, for example, pushes humans to spread out and enrich the gene pool. In most societies, shame discourages antisocial behavior, such as hoarding food. Making sense of such signals is a survival skill. The shame denotes one’s fragile place within the tribe or community. In a Darwinian sense, it issues a warning, which is received as a foreboding. This alert dates back to our early days, when the shamed could be shunned, or even killed. The dread of abandonment is so powerful that it can make us feel nauseous or suicidal.*

Drunk driving is a relative newcomer to the pantheon of shame. Even more recent is the shaming of those who ignore social distancing or cough into a crowd during a pandemic. We shame people who do not look out for the group. It is the fear of shame, in many minds, that leads people to value their membership in that group over their egos and desires. When it works, it discourages our species from following some of our worst instincts. 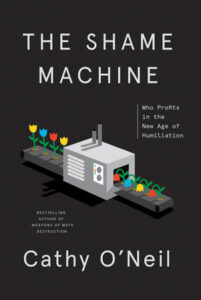 Excerpted from The Shame Machine: Who Profits in the New Age of Humiliation by Cathy O’Neil. Copyright © 2022 by Cathy O’Neil. Excerpted by permission of Crown Publishing, an imprint of Penguin Random House LLC. All rights reserved. No part of this excerpt may be reproduced or reprinted without permission in writing from the publisher.

Cathy O’Neil is the author of the bestselling Weapons of Math Destruction, which won the Euler Book Prize and was longlisted for the National Book Award. She received her PhD in mathematics from Harvard and has worked in finance, tech, and academia. She launched the Lede Program for data journalism at Columbia University and recently founded ORCAA, an algorithmic auditing company. O’Neil is a regular contributor to Bloomberg Opinion. 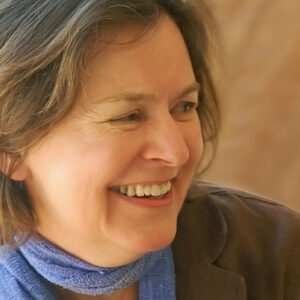