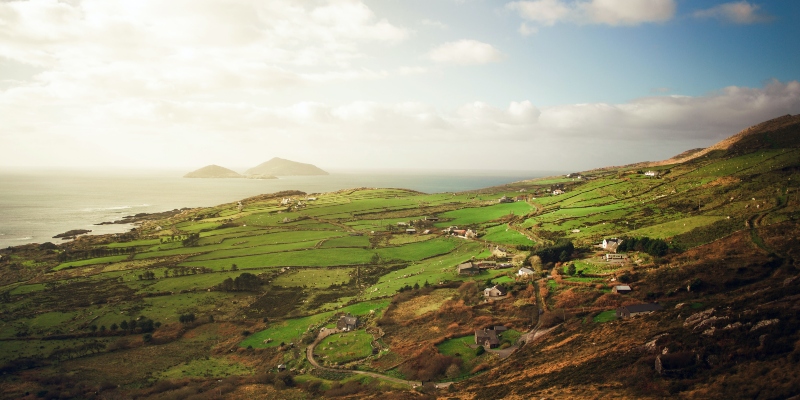 Phytophthora infestans is a fungus that attacks the growing potato plant, causing the tuber to degenerate into a blackened, slimy pulp. It was first reported on the Eastern Seaboard of the United States in 1843. Its appearance in Europe in the summer of 1845, probably carried across the Atlantic in a cargo of seed potatoes, caused widespread hardship. In Ireland, however, the consequences were disastrous. No other food of the same nutritional value could be grown in such quantities on small patches even of marginal ground, such as reclaimed bog or the upper slope of mountains.

As the population of Ireland almost doubled, from 4.4 million in 1791 to more than eight million in 1841, the potato had become the staple food of the poor. According to one estimate, around one-third of the population depended on this single crop for 90 per cent of their food requirements. The potato fungus arrived late in the season in 1845, allowing roughly two-thirds of the crop to survive intact. In 1846, however, the fungus took hold and blighted the potato crop, creating a second successive year of crop failure. Harvest that year was only one-fifth of normal.

No other food of the same nutritional value could be grown in such quantities on small patches even of marginal ground, such as reclaimed bog or the upper slope of mountains.

The first deaths from starvation came in October, and the winter that followed saw horrific scenes: emaciated men, women and children begging for scraps of food, or foraging desperately for anything that could be eaten, while dead bodies lay unburied in obscure corners, or inside cabins that had been stripped of every last item that could be sold or bartered for food. The crisis continued for another five years.

The last death from starvation was recorded at the end of April 1851, and it was not until after the healthy potato harvest of that autumn that something like normality returned. The census of 1851 recorded a population of 6.6 million, around two million fewer than might have been expected. There had been roughly one million deaths, over and above what would have been expected across the same period in normal years. Perhaps 10 per cent of these deaths had been caused from starvation, the rest from the spread of disease in a population weakened by malnutrition and forced into crowded and unsanitary workhouses. The remainder of the fall in population, another million or so, was a result of emigration.

The initial impact of the potato blight on numbers leaving was modest. An estimated 109,000 people sailed for North America in 1846. This was well above the average of 66,000 emigrants a year between 1842 and 1845, though not dramatically higher than the pre-Famine peak of 93,000 departures in 1842. In the last months of 1846, however, the first signs appeared of an alarming new development. Sailings normally took place during the spring and summer. But after the second successive failure of the potato crop, in the autumn of 1846, unprecedented numbers were willing to accept the additional risk and hardship of an out-of-season crossing.

Throughout the winter of 1846–7 reports continued of roads and canals unable to cope with the numbers making for the port towns, and of ports themselves crowded with people desperate for a place on any vessel willing to sail. Total departures during 1847 were 224,000, a level never seen before. By the end of the year, this panicked exodus seemed to be coming to an end. Mass starvation continued, because so few potatoes, about one-eighth of the normal acreage, had been sown. But what had been harvested was free of blight, a hopeful portend for the future.

Departures picked up again in early 1848, but that was because of a rush to beat the expected rise in fares that would follow the tighter regulations imposed by a new Passenger Act. Instead it was the harvest of 1848, when spores that had lain dormant in the dry summer of 1847 revived to once again blacken field after field of potatoes, that shattered any remaining resistance to emigration.

Large numbers of people, one newspaper reported in September, had up to this held back from leaving, simultaneously horrified by tales of the sufferings that had accompanied the mass exodus of 1847 and encouraged by that year’s healthy crop. Now, however, “the gambling root has cheated them anew” and huge numbers were preparing to flee the country. In every year between 1849 and 1852 the number emigrating was to remain above 200,000; in 1851 it was just short of a quarter of a million.

The mass emigration that rescued hundreds of thousands from fever and starvation owed almost nothing to the assistance of government. British administrations, first Tory then Liberal, responded to the crisis unfolding on the other side of the Irish Sea with a succession of temporary expedients—a system of public works, soup kitchens distributing basic rations, and eventually a much-expanded workhouse system offering the desperate a bare subsistence. But their commitment to saving lives was diluted by a determination not to impede what policy makers saw as a painful but necessary restructuring of the Irish economy. That restructuring, it was clear from the start, would have to include emigration.

Their commitment to saving lives was diluted by a determination not to impede what policy makers saw as a painful but necessary restructuring of the Irish economy.

The projected reorganization of agriculture envisaged a class of laborers earning steady wages from enlarged farms created by the consolidation of small holdings. But the number so employed would be limited. Manufacturing industry, in an Ireland relieved of the burden of an impoverished agricultural sector and made more attractive to British capital, might expand to absorb some of those moved off the land. But there would also be a substantial surplus population whose only future lay outside Ireland. The British prime minister, Lord John Russell, the Irish lord lieutenant and others tried to make the case for state-subsidized emigration.

However the British treasury was unwilling to meet the costs. There were ideological objections to what would be in effect a subsidy to Irish landlords, who were widely seen as having created the crisis by their lax management of their estates. And there was also the argument that large-scale emigration was taking place anyway, without state assistance. In this, as in other respects, government policy was that Ireland’s future was to be decided by the workings of the free market.

Local government played only a slightly bigger part in promoting emigration. From 1838, boards of Poor Law Guardians had the power to raise funds by a local rate to subsidize the emigration of poorhouse inmates. In practice, however, the cost of day-to-day relief ate up all available funds, so that these powers were little used. In the twelve months from September 1848, Boards of Guardians supported the emigration of just 201 men, 400 women and 270 children. It was only as the immediate crisis eased after 1850 that unions became able to think about subsidized emigration as a long-term investment that would reduce the cost of poor relief.

New legislation, in August 1849, allowed unions to borrow rather than having to support emigration wholly out of current resources. Even then, however, the numbers involved remained insignificant. In a twelve-month period across 1851–2, unions sponsored 3,092 emigrants to British North America, nearly two-thirds of them women, mostly aged between 14 and 25. But total emigration across the same two years averaged 235,000 each year.

At the same time that the government allowed the consequences of ecological catastrophe broadly to take their course, Irish landlords made their own contribution to the catastrophe by initiating large-scale clearances, evicting smaller tenants and their families and leveling their cabins to prevent them returning. Landlords were encouraged to do so by legislation making them, rather than the occupier, responsible for the rates payable on holdings of less than four acres.

Statistics, available only from 1849, show that in that and the next four years nearly 50,000 evictions took place, representing perhaps a quarter of a million displaced persons. This figure does not include an additional number of tenants, unknown but probably substantial, who left under the threat of eviction, making a nominally voluntary surrender of their holdings in exchange for a small sum of money or the right to hold on to possessions that might otherwise have been seized to pay off their arrears of rent.

Emigration did, as policy makers envisaged, play an important part in resolving the desperate crisis created by the destruction of the potato crop.

A few landlords sought to ease the process by assisting the displaced to emigrate. The Palmerston estate in County Sligo, property of the British foreign secretary, spent over £8,000 assisting 2,000 tenants to emigrate during 1847. The Fitzwilliam estate in County Wicklow spent £25,000 to send out nearly 6,000 people, representing a third of the tenants. But these were prohibitive sums. Most Irish landlords, faced with collapsing rents and spiraling taxes, had no such resources. Removals, even if financed, were also unpopular.

Major Denis Mahon, who arranged the departure of 833 tenants from his estate in Roscommon, was shot dead in November 1847, apparently following reports of the large number of deaths on a ship he had organized. For his part, Palmerston was vilified when he advertised for new tenants to take farms of 500 and 1,000 acres on the lands he had cleared by eviction. The best estimates suggest that between 1846 and 1855 landlords gave significant assistance to between 50,000 and 80,000 emigrants. This would amount to between 4 and 5 per cent of the total number leaving Ireland during that period.

Without significant support from government or landowners, emigration did, as policy makers envisaged, play an important part in resolving the desperate crisis created by the destruction of the potato crop. But those it took away were not necessarily the destitute, or people in imminent danger of starvation. As in the period up to 1845 those who now crowded onto emigrant ships were drawn disproportionately from two areas: counties like Cavan and Longford, where emigration was already common, or prosperous, commercialized counties like Meath and Louth, where those affected by the crisis were most likely to have access to the necessary information, about tickets, routes and destinations, as well as resources that could be converted into the cost of a passage.

There was a definite increase in the number of poorer emigrants. The proportion of Irish passengers arriving at New York who were classified in ships’ manifests as laborers and servants rose from 60 per cent in 1836 to 75 per cent in 1846. Among those arriving in the same port during 1847–8, the western province of Connacht provided almost one in four, compared to only one in eight across the previous ten years.

But some of the counties worst hit by the failure of the potato crop, such as Kerry, Clare and Mayo, sent out relatively few emigrants in relation to their population. A part of the rural poor, in these districts and elsewhere, were able to make the cheaper journey to Great Britain. Many others, however, had no choice but to stay where they were, and died in their hundreds of thousands. 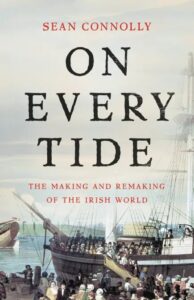 Excerpted from On Every Tide: The Making and Remaking of the Irish World by Sean Connolly. Copyright © 2022. Available from Basic Books, a division of Hachette Book Group.

Sean Connolly is professor of Irish history (emeritus) and visiting research fellow at the Institute of Irish Studies at Queen’s University Belfast. He is the author of five books, including Contested Island and Divided Kingdom, and was general editor of The Oxford Companion to Irish History. Born in Dublin, he lives in Belfast.

On the Culinary and Artistic History of Cheese 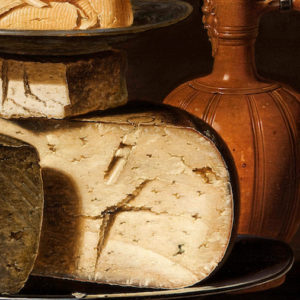 On the Culinary and Artistic History of Cheese

I don’t know much about cheese, but I know what I like. Crumbly wensleydale. Comté. Provolone. Taleggio. Stilton. Cumin-studded...
© LitHub
Back to top
Loading Comments...