via Alfred A. Knopf

How Humans Learned to Count, Thus Opening the World

Michael Brooks on the Surprising Sophistication of “Finger-Counting”

We shouldn’t take mathematics for granted. The modern human—Homo sapiens, the “wise man”—has been around for 300,000 years, and we have found human-created artifacts that are at least 100,000 years old. But our oldest reliable record of human counting is somewhere around 20,000 years old. The markings laid out on the surface of the Ishango Bone, discovered in the Ishango region of what is now known as the Democratic Republic of Congo, are a series of long notches that are grouped into three columns, each of which is subdivided into sets. Though we can’t know anything for sure, it doesn’t seem too much of a stretch to suppose that a single stroke designates an occurrence of “one.” Two strokes is “two” and, well, you get the idea. Taken as a whole, the notches look like a tally system for counting lunar cycles.

The relatively recent creation of this bone suggests that counting is a late-blooming skill, not an inevitable result of intelligence. The brain inside your head is largely the same as the one inside the skull of the first Homo sapiens, and it seems that for most of our species’ history, this wise man did not bother with numbers at all.

Once we did get to grips with numbers, however, the advantage was clear. This is why you probably don’t even remember learning to count. Counting is such a valued skill in most human cultures that you would have started before you began to lay down permanent memories.

It seems that for most of our species’ history, Homo sapiens did not bother with numbers at all.

And I’m willing to bet that you learned to count using your fingers. The first time I ever really thought about finger-counting—apart from in embarrassment when I realized I was doing it in public, in a supermarket, as I counted off that night’s dinner party guests—was when I saw Quentin Tarantino’s riotous war movie Inglourious Basterds. During a scene in a basement bar, a British character is pretending to be German. He indicates to the barman that he wants three glasses by holding up his index, middle, and ring fingers. The German officer with whom he is sharing a table knows immediately that his drinking partner is a fraud. “You’ve just given yourself away, Captain,” he says.

Germans use the thumb for “one,” so a German would have ordered three glasses using the thumb and the first two fingers. In Asia, people finger-count differently. My friend Sonali, who grew up in India, learned to count using the individual segments of her fingers. Merchants in the Indian state of Maharashtra do it differently again. They start with the thumb, like the Germans, but when they get to five, they raise the thumb of the other hand—usually the right—to indicate one “five” has been reached. The left fist closes again, and the thumb comes out to indicate “six.”

Imagine doing business with a Maharashtran merchant. At first you would probably be confused, but it wouldn’t take you long to figure out, with no language at all, how much you were being asked to pay. Thanks to finger-counting, you can carry out commercial trade with no common written or spoken language. All you need is for both sides to know what currency you’re talking about, and to appreciate the meaning of numbers as they rise from one into the hundreds and thousands.

This is why learning finger signs was an essential part of education for almost all members of ancient societies. Even the most isolated communities would barter with passing traders with whom they might have no common language. In his 4th-century BC writings, Aristophanes mentions finger-counting as being a common practice of ancient Greece and Persia. The Roman writer Quintillian talked about the shame that would be heaped upon a lawyer who hesitated over his finger signs for numbers.

Aztec paintings depict men using finger signs, and in medieval Europe, finger-counting was so ubiquitous that Luca Pacioli’s 1494 acclaimed mathematics textbook Summa de Arithmetica, Geometrica, Proportiono e Proportionalita contained a complete illustrated guide to the art. Even as late as the 18th century, the German adventurer Carsten Niebuhr describes Asian market traders conducting covert negotiations by grasping each other’s fingers and thumbs in various configurations. To keep their business to themselves, they would do this with their hands hidden inside voluminous sleeves or under a large piece of cloth draped over their wrists.

In his 4th-century BC writings, Aristophanes mentions finger-counting as being a common practice of ancient Greece and Persia.

Because the means of signifying numbers has always varied from culture to culture, students of business had to learn their hand gestures carefully. Poets and teachers created rhymes and aphorisms to help with this, such as this effort from the ancient Arab world: “Khalid left with a fortune of 90 dirhams, and when he came back he had only a third of it left.” Though it doesn’t sound helpful to us, the Arabian finger sign for 90 was an index finger curled tightly against the base of the thumb. One-third of 90 is 30, the sign for which was a much broader circle, with the tip of the index finger held against the tip of the thumb. The implication is that Khalid has been sodomized as well as robbed. I suspect you will now remember these ancient signs for 90 and 30 for the rest of your life.

The reason finger signs are so ubiquitous has a lot to do with the reason that humans became good with numbers, once we realized their value. It’s this: over the first five years of your life, through play, experimentation, and stimulation, your brain develops something called finger sense, or “gnosis.” This is the ability to treat and sense each digit separately. After a while, your brain begins to hold an internal representation of your fingers, and this representation is used to help when you start to deal with numbers. The beauty of fingers is that they can be seen, felt, and moved. They come in two collections of five units, each of which can be put into different configurations of flexion. If you were to put together a tool for assigning a concept of “how many?” to a group of objects in front of you, you would struggle to beat your own fingers.

Brain scans show that when most of us are presented with mathematical tasks such as subtracting one number from another, the area of the brain that deals with inputs from the fingers steps up to the plate. If the numbers involved are big, the activation of those brain circuits is even clearer. Interestingly, if you’re particularly good at subtraction, your brain’s finger circuits don’t get quite so active: they’re barely breaking sweat, in other words. But it’s also worth noting that if you weren’t encouraged to use your fingers in play as a child—especially when singing counting songs such as “One, two, buckle my shoe,” you may never have really “got” numbers. Numbers just won’t be represented in your brain in the same way that they are for other people. That’s one reason some people struggle with math.

Once you have numbers at your fingertips, it might seem obvious that the next step is to start writing them down. But if we didn’t have to start using numbers, we certainly didn’t have to start writing them down. After all, when trade was in the moment, involving face-to-face bargaining and immediate transfer of goods or services, there was no need to keep tabs on the transactions. So what made us develop written numerics? By writing numbers down, we could formulate predictions about celestial events that might have religious relevance—new moons or solar eclipses, say. Or we could create inventories of stock and prices paid, and document promises to buy and sell at some point in the future. Writing numbers probably started as a religious practice but it also allowed us to take trade to the next level. Whatever its origins, it led directly to the prosperity we enjoy today. 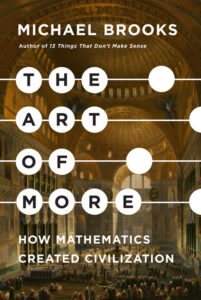 Excerpted from THE ART OF MORE: How Mathematics Created Civilization by Michael Brooks. Copyright © 2022 by Michael Brooks. Excerpted by permission of Alfred A. Knopf, a division of Penguin Random House LLC. All rights reserved. No part of this excerpt may be reproduced or reprinted without permission in writing from the publisher.

Michael Brooks, who holds a PhD in quantum physics, is an editor at New Scientist. His writing has appeared in the Guardian, Independent, Observer, Times Higher Educational Supplement, and even Playboy. He is a regular speaker and debate chair at the Science Festival in Brighton, UK. 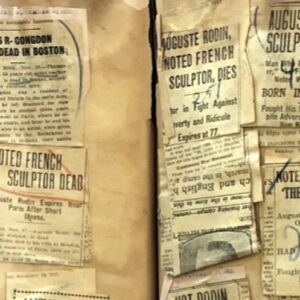 When I open the scrapbooks, tiny flakes of brittle, brown paper fall away from their edges, warning me that my compulsion...
© LitHub
Back to top
Loading Comments...