How Far Can Fascist Satire Go?

On the Troubling, Compelling Work of Curzio Malaparte

Voice can count for a lot. When reading first-person accounts of significant moments in history, or observations on the conditions that got us to that point, a deftness with words can go a long way. That can be the difference between a cursory description of something and a deeply compelling narrative that pulls in the reader and keeps them enveloped, fascinated, and hooked. The right narrative voice can turn even the most mundane of situations into the stuff of high drama and riveting action; when asked to describe a complex era or a long-running conflict, those voices can thrive. But there’s a danger that comes along with that same skill: the same beguiling narrative voice that envelops the reader doesn’t necessarily have to have a conscience, and sometimes the most gripping literature can come from authors whose moral compass appears to have gone awry.

Such is the case when reading the works of Curzio Malaparte. A quick scan of his biography offers some clues as to why: namely, the fact that he was an early member of the Fascist party in 1920s Italy. And while that doesn’t sum up Malaparte’s politics—he subsequently broke with the Fascists, eventually swinging to the other side of the political spectrum and embracing Communism before converting to Catholicism shortly before his death. Part of the fascination of Malaparte’s work is seeing these disparate elements battle it out in his work: cruelty and compassion, humanism and egotism, veracity and stylization.

But in light of recent political events the appeal—such as it is—of Malaparte’s work can also be viewed from an entirely different angle. In Rachel Kushner’s introduction to NYRB Classics’ edition of The Skin, she points out that Malaparte’s name was one he adopted in adulthood. (And it’s probably worth mentioning that Kushner’s own novel The Flamethrowers dealt in part with the political and moral aftereffects of Italian fascism.) “[H]is invented surname was an inversion of Bonaparte: He’s on the bad side, not the good side,” she wrote. Later, she succinctly describes Malaparte as “an ideologue of a sort, but always a perverse and inscrutable one.”

In summary, Malaparte was a writer who took on a politically charged pseudonym, embraced the inherent villainy of his position (at least for a time), and reveled in self-conscious provocation. Does that sound familiar? If you’ve been following some of the most unpleasant aspects of American political debate right now, it probably does.

To clarify: last August, Vox published a lengthy piece by Dylan Matthews with the memorable headline “The alt-right is more than warmed-over white supremacy. It’s that, but way way weirder.” in it, Matthews attempted the Herculean task of parsing through a host of decidedly unpleasant far-right ideologies, from political channels on the online community 4chan to neoreactionaries with ties to Silicon Valley startup culture. Among the figures profiled in Matthews’s piece is a neoreactionary who writes under the name “Mencius Moldbug,” and it isn’t hard to see echoes of the alt-right’s provocation of the sake of provocation when reading through Malaparte’s work.

In the year since Matthews’s piece was published, this strain in American politics has only become more vocal and, frequently, more horrifying. This month’s events in Charlottesville, and the president’s subsequent refusal to disavow violent, reactionary far-right protestors, are the most high-profile (and flat-out awful) example of this; worryingly, they probably won’t be the last.

This reactionary tendency in American politics takes on less violent forms as well. A vocal chunk of American right-of-center conversation has put itself in a kind of knee-jerk “whatever the left is for, I’m against” position, with a side order of mockery and sarcasm. In an essay this winter for New York magazine, Andrew Sullivan examined the case of White House advisor Stephen Miller and, more broadly, the right-wing tendency to go for shock value rather than a more nuanced debate over the issues. In doing so, he was critical of some of his own past behavior as well.

“As a young, lonely conservative in college, I now wince at recalling, I threw a Champagne party to welcome Reagan’s cruise missiles to Britain. Of course I knew better—and could have made a decent argument for deterrence instead of behaving like a brattish dick. But I didn’t. I wanted to annoy and disrupt the smugness around me. If you never mature, this pose can soon become your actual personality…”

That sense of annoyance and disruption, and a gulf between pose and personality, are both very much on display in The Skin and Kaputt. In his afterword to Kaputt, Dan Hofstadter enumerates the reasons why Malaparte’s amorality can be troubling, referring to his “essentially treacherous (and also pan-European) mentality,” and referring to Malaparte as “an unprincipled arriviste.” Still, reading Malaparte’s writing can contain some insights about contemporary politics, even as readers may bristle at some of the more loathsome aspects of his narrative persona.

The Skin was first published in 1949; this translation is by David Moore, with some additional translation work handled by Stephen Twilley. Kaputt debuted in 1944; the English translation there was by Cesare Foligno. Kaputt follows Malaparte as he journeys around Europe during the Second World War; The Skin follows his interactions with a group of American soldiers occupying Italy. The line between fact and fiction blurs somewhat in both. In Kushner’s introduction to The Skin, she calls each “a novel that in moments seems something like reportage but is too manipulated and occasionally absurd to be mistaken as such.”

Throughout much of The Skin and Kaputt, Malaparte places himself at a remove from the characters with whom he interacts, whether they’re craven Nazi officers, well-intentioned Swedish royalty, or idealistic American servicemen. At a banquet near the end of The Skin, he tells a group of Americans that the attention their soldiers are receiving from women is solely based on the fact of their victory.

In the same scene, one of the guests tells him, “You are immoral.” Tellingly, Malaparte doesn’t dispute this point. But later he gets a kind of revenge, noting the guests’ horrified reaction to the dinner at the banquet: an animal pilfered from the local aquarium that, when cooked, resembles a human child. There’s a sense of needing to get the last word here—in Kaputt, Malaparte eggs on one of his companions, asking him if he “could be capable of smoking a piece of human flesh.” Prodding at taboos (and those who observe taboos)—it’s another case where Malaparte’s writing echoes more contemporary conservative figures.

That isn’t all there is to his writing, however. Malaparte’s descriptions are frequently haunting and provide a nearly tactile experience of history. In Kaputt, an early scene focuses on a number of horses frozen in a lake, and the subsequent actions taken to remove their bodies as the lake thawed. Later, he recounts a visit to the Warsaw ghetto, which makes for an even more gut-wrenching reading experience, both for the vividness of his prose and for his own complicity in the system that led to it.

In The Skin, his evocation of devastation, poverty, and desperation in Naples in the aftermath of war are harrowing, sometimes for what they contain, and sometimes for their callousness. “During the last few days the prices of girls and boys had dropped, and they were still falling,” he writes early in The Skin. Through much of this book, he uses the voices of several American soldiers with whom he was working as a sort of horrified moral compass and counterpoint—though it can be difficult to tell if he means to portray himself as the world’s only honest man, raising uncomfortable truths about the world to the idealists he encounters—or if Malaparte the writer is using Malaparte the character as a figure of derision, translating and exaggerating his own worst impulses onto the page.

If that’s the case, it’s another area where he leaves his contemporary readers in a difficult place. There’s a long homophobic screed about a third of the way through The Skin that just about stops the book in its tracks, falling somewhere in tone between a reactionary rant and a knowingly over-the-top parody of the same. Given Malaparte’s political fluctuations over the years, either could be the case, but this doesn’t seem like an instance where the benefit of the doubt is warranted.

But part of what makes both The Skin and Kaputt fascinating is the way in which Malaparte zig-zags between a sort of louche amorality and a primal sense of right and wrong. Late in The Skin, the post-war setting of extreme poverty, conflict, and debased humanity turns even more apocalyptic when Mount Vesuvius erupts—the sort of volcano ex machina that would seem like a hugely contrived aspect of the plot, except that it actually happened. And shortly after he discusses the price of humans in that same book, he discusses his feelings on Americans, which veers from idealism into a kind of critique of the same–though his own perspective is being similarly critiqued.

And there are a handful of moments later in the same book in which he includes sarcastic reactions from readers of Kaputt, who discuss how this reaction will be altered or spun as his current book is written. In the section titled “The Black Wind,” Malaparte encounters a fatally wounded American soldier, and nearly breaks down: “I felt a lump in my throat, and I could hardly breathe. I cannot bear to see a human being suffer. I would rather kill him with my own hands than see him suffer.”

Late in Kaputt, he describes a group of faces as having “[a] corrupt glory,” a phrase which could just as easily be used to describe his own writing. These books aren’t easy to read. Although both show glimmerings of a deeper morality and a sense of outrage beneath the surface—Kaputt in a more linear fashion than The Skin—Malaparte’s mockery of nearly everyone, fascists and democrats alike, makes it difficult to find a center for his work. The same wit that makes the prose glisten is at the service of a general amorality than often holds reactionary qualities. See also: Sullivan’s anecdote mentioned earlier; see also, David Brock’s memoir of his time as a conservative provocateur in the 1990s, Blinded by the Right. See also: our current political moment. At least Malaparte would occasionally include himself in his list of targets.

Still, those glimmerings of morality and that sense of outrage that can each emerge from the smarmier aspects of Malaparte’s voice can surprise the reader—and largely play a role in why these books continue to be read, and continue to be worth reading. Contrast this with the likelihood of the work of some contemporary neoreactionary being given a deluxe literary reissue 60-odd years from now. There are elements of Malaparte’s work that can still horrify—whether intentionally or not—but they also provide a window into a troubling state of mind, and offer more than echoes of a troubling strain in contemporary political writing. 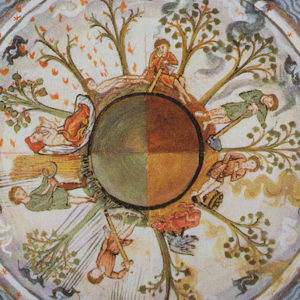 “I was born secular / and inconsolable…” –Jenny Lewis I never imagined that something like Linda Goodman’s best-selling...
© LitHub
Back to top