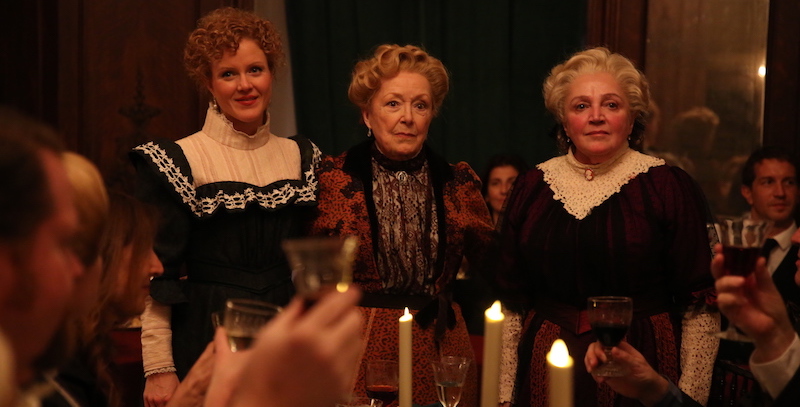 Feasting with the Ghosts of “The Dead”

It’s a touch ironic that the central hook of The Dead, 1904, an immersive theatrical adaptation of James Joyce’s short story “The Dead,” is a lavish holiday feast. Performed at the wonderfully festive and stately Irish Historical Society on New York’s Upper East Side, The Dead, 1904 invites its audience to sit around the table with Joyce’s Morkan women and their dinner guests to partake in their annual Feast of the Epiphany. It’s January 6, 1904, the snow is falling, candles are lit, stout and sherry poured—and the table is set with steaming tureens heaped with potatoes, cranberry sauce, and winter oranges for an intimate audience of 52. The source of this irony lies in the tension between the very act of feasting and the unnamed specter looming between the lines of Joyce’s most famous short story: Ireland’s Great Famine.

Not two generations removed from the horror of losing a quarter of their country’s population to mass starvation, the characters in Joyce’s “The Dead” sit down around a table heaving with food. And though the conversation resonates with memories of years past, explicit mention of or allusion to the famine is conspicuously absent. It’s the meal itself—its meaty, alluring aromas, its very muchness—that conjures what no one can bring themselves to speak of. Roast turkey (goose in the story), spiced beef, floury potatoes, celery stalks in vases, dried figs, and bread pudding—it’s all just as Joyce described it in the Irish Repertory Theater’s staging. “Our caterer insisted we add green beans to the plate,” said novelist Jean Hanff Korelitz, who wrote the play with her husband, the Irish poet Paul Muldoon. “There would be no vegetables in 1904, but otherwise, it’s a very faithful interpretation.” 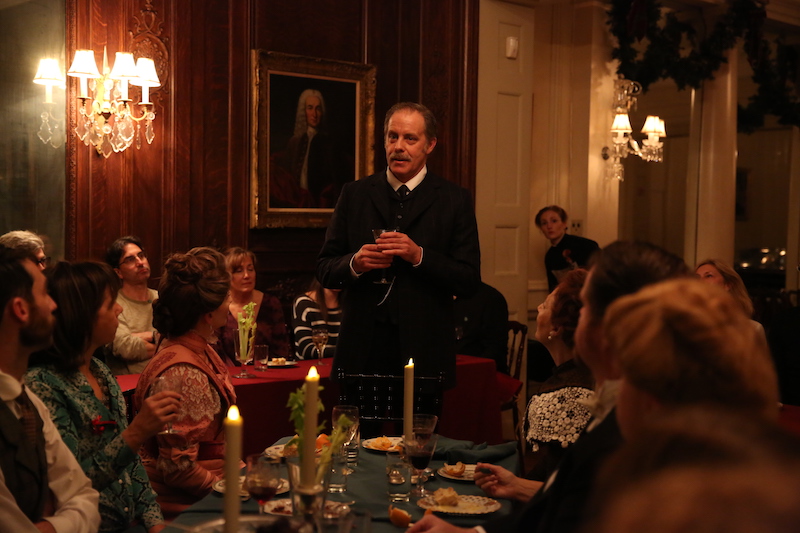 Impressively, Korelitz and Muldoon’s script hews closely to “The Dead,” even managing to render in dialogue Joyce’s famous final, omniscient meditation on the snow, “general all over Ireland.” Its choreography catches and traces the uncanny cosmic loop of the Morkan women, Gabriel and Gretta Conroy, Freddy Malins, Mr. Browne, and sweet, fumbling Lily—and it implicates the audience in its patterned web.

As in the story, guests are greeted by the pale, sprightly Lily—run off her feet!—and ushered into the party where a piano tinkles, punch is ladled, and the Morkan sisters swish about, readying their home for the imminent feast. (The imagination must simultaneously reconcile the fact that the sisters would not have lived in such a luxurious mansion, but rather had rooms above a corn factory on Usher’s Island, and went to great lengths to keep up the appearance and trappings of women of more means, if only for an evening.) There we are sipping whiskey and fretting with the sisters over their nephew’s late arrival. Here, Gabriel arrives in his fancy, continental galoshes with Gretta, his Galway-born wife. A song is played, a dance had, Irish identity cordially (subliminally) debated. There, Freddy Malins blusters in, screwed again. Here, Gabriel carves the goose, agonizes over his annual toast, raises a glass, and so on.

The ultimate story in Joyce’s Dubliners is eerie, not only for its haunting title and mournful, conclusive elegy, but also for the atmosphere it conjures up; that of the annual holiday celebration. The human compulsion to fete tradition no matter the burden. The expectation that time-honored grooves will be—must be—followed, for fear of leaving obligation unfulfilled. To put it another way, “The Dead” is as much about the horror and mundane melancholy of growing older as it is about Irishness and the psychic toll of the Famine. Reading “The Dead” feels as if stumbling across a peephole through which we might gaze upon this well-worn pattern. Taking part in The Dead, 1904 as an audience member only amplifies the uncanny witnessing of Joyce’s perpetual, sepia-hued loop. In sitting down at the Morkan table, we are, for the majority of the show, woven into the tapestry of Ireland’s collective memory—just up until the final moments, when the balance shifts and we become invisible to the actors.

Taking part in The Dead, 1904 as an audience member only amplifies the uncanny witnessing of Joyce’s perpetual, sepia-hued loop.

Just after Gretta overhears Mr. D’Arcy sing “The Lass of Aughrim,” triggering her youthful recollections, and she and Gabriel retire to bed, the audience experiences a transference from participation to spectatorship. That is, we become spectral.

“My favorite moment is when the audience realizes they’re alone for about ten seconds,” Korelitz said. “They look nervously at each other, wonder what they should do.” 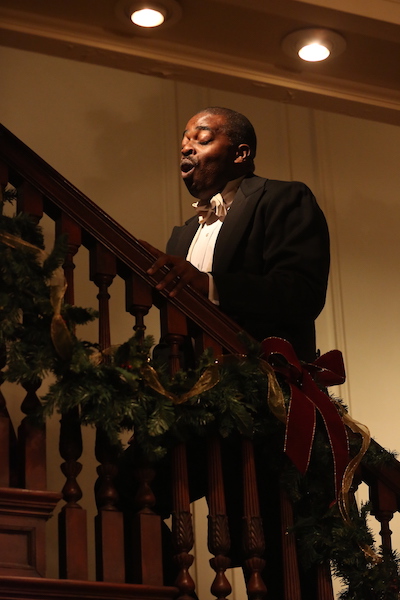 It’s a thrilling moment, but also a chilling one because within the span of a few seconds we have come to occupy the same territory as memory—and those who came before us. Much like Scrooge bearing witness to the future in A Christmas Carol, we haunt the edge of the stage, no longer alive, no longer visible, but having passed into the same liminal province as those that came before us.

“The twilight zone of time entered the spirit of ‘The Dead’ in fascinating ways,” says Colm Tóibín in his recent book Mad, Bad, Dangerous to Know. “Joyce set his story not only in an imagined past but also in an imagined future.”

Again, this experience—the tangibility of a literal feast juxtaposed with the voyeurism of Gretta’s private devastation over her unrequited, decades-gone lover—amplifies Joyce’s modernist drama. It lays bare the quality of bereftness that the holidays so often evoke. We have grown older; we have become old.

“The violence and drama of Irish history, it’s very much subterranean, under the frost of the piece.”

In “The Dead,” Joyce mirrors the Chekhovian notion that the everyday is just as dramatic and tragic and electric as a proverbial gun going off in the final act. But “there are no guns here,” Muldoon said of “The Dead.” “They’re mental guns, buried under the thatch a of a cottage somewhere. …The violence and drama of Irish history, it’s very much subterranean, under the frost of the piece.” 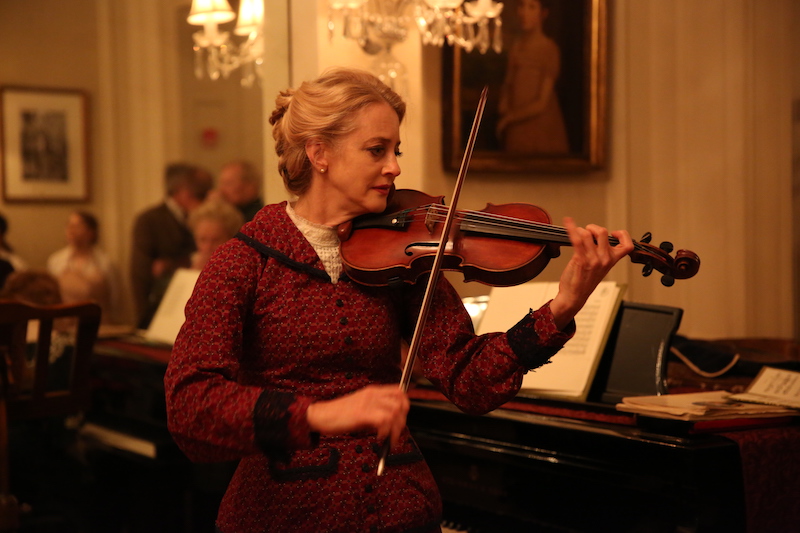 In Conversations with Joyce, Arthur Power records the author as saying, “His plays are a continuous action in which life flows onto stage and flows off again, and in which nothing is resolved, or with all his characters, we feel that they have lived before they came onto the stage and will go on living just as dramatically as after they have left it.”

This is nearly exactly what The Dead, 1904 has achieved in its interpretation of Joyce—the strange feeling that we’ve stumbled into a world that existed long before we entered it, and will go on existing long after we’ve collected our wool and cashmere from the coat check and hailed a taxi along Fifth Avenue.

Leslie Pariseau is a writer and editor in Brooklyn. She's a co-founder of the web magazine PUNCH, and has written for The New York Times, The Ringer, Saveur, Vulture, and Slate among others. Leslie is earning her MFA in Fiction from Hunter College and at work on a novel.

Meet the Writer Who Chased Eve Babitz All Over Hollywood 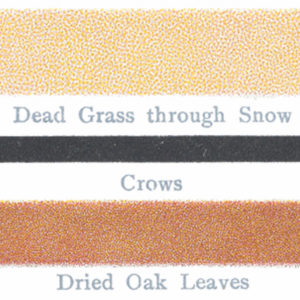 The relation of color to light is much the same as that of music to sound. Color has its many hues, its long scales of tints...
© LitHub
Back to top
Loading Comments...