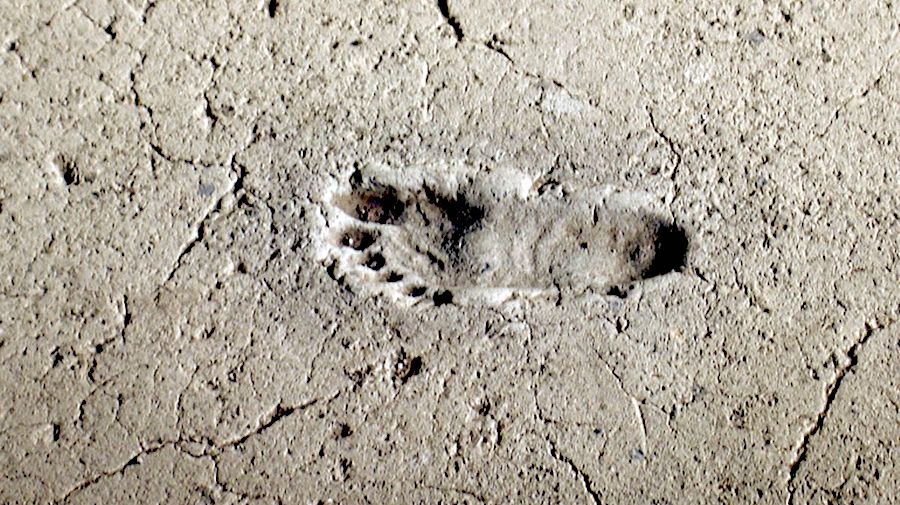 via Farrar Straus and Giroux

“We are inextricably part of Europe,” Margaret Thatcher told Britain in 1975. “Neither Mr. Foot nor Mr. Benn”—the chief Brexiteers of the day—”nor anyone else will ever be able to take us ‘out of Europe,’ for Europe is where we are and where we have always been.”

This may sound odd, given Mrs. Thatcher’s later reputation as the arch-enemy of European integration, and some historians do wonder whether she really meant it. After all, she had just taken over a Conservative Party whose biggest recent success had been taking Britain into the European Community; now that a Labour government was putting this achievement to a referendum, honor surely required her to defend it.

Yet, whatever Thatcher’s inner qualms, her advice to the nation on the eve of the first Brexit referendum laid bare, as well as anyone has ever done, the fundamental facts of Britain’s position. So compelling is her claim—that Britain is inextricably part of Europe and cannot be taken out of it, for Europe is where Britain is and where it has always been—that I am going to call it Thatcher’s Law.

Like all scientific laws, Thatcher’s has exceptions. Britain has not really “always been” in Europe, because there has not always been a Europe to be in. Our planet has existed for 4.6 billion years, but shifting continental plates only began creating what we now call Europe about 200 million years ago.

That caveat aside, however, Britain was very literally part of Europe for 99 per cent of these 200 million years, because the Isles were not islands at all but one end of a great plain stretching unbroken from Russia to an Atlantic coastline lying 150 km west of modern Galway. For want of a better name, I will call this huge, ancient extension of the Continent “Proto-Britain.”

During the multiple ice ages which filled much of the last 2.5 million years, glaciers sucked so much water out of the oceans that what we now know as the North Sea and Eastern Atlantic were largely above sea level. At the coldest point, 20,000 years ago, temperatures averaged 6 °C cooler than today. Ice sheets up to 3 km thick covered much of the northern hemisphere, trapping 120 million billion tons of water and leaving the sea level 100 m lower.

Nothing could live on the glaciers that blanketed the future Scotland, Ireland, Wales and northern England at the coldest points of the last ice age, and the tundras which stretched 150 km or more beyond their southern edge were scarcely more welcoming. At some points ice locked up so much moisture that barely one-fifth as much rain fell as nowadays and the air carried ten to twenty times as much dust. Even more than the cold, this aridity meant that very few plants could grow in Proto-Britain, and so there were very few animals around eating them, and no people at all eating anything.

The first human-like apes (anthropologists argue endlessly over how to define “human”) evolved on East Africa’s savannahs around 2.5 million years ago, immediately creating the original geostrategic imbalance. The pattern of imbalances arising in one place and evening out across space, is therefore as old as humanity itself. In this case the evening out took hundreds of thousands of years, as proto-humans migrated into previously humanless parts of Africa.

However, in another pattern, new imbalances were created as fast as earlier ones evened out, because new kinds of humans went on evolving, whether back in the original East African homeland or from inter-breeding among the humans spreading into Asia and Europe. By 1.5 million years ago, people who could communicate in complicated ways—even if what they did was not exactly talking—had fanned out as far as Indonesia, China and the Balkans. Only during warmer, wetter breaks in the ice ages could they work their way further across Europe, but in one of these periods, nearly a million years ago, the first proto-humans wandered into Proto-Britain.

The evidence comes from a tangle of footprints on a muddy tidal riverbank at Happisburgh (pronounced, because this is England, “Hazebruh”) in Norfolk. After being buried by drifting sand, the mud hardened, preserving the tracks until 2013, when storms washed away the material covering them. Within two weeks the waters had washed away the footsteps too, but that was long enough for archaeologists to pounce and record every detail—earning, quite rightly, Current Archaeology magazine’s “Rescue Dig of the Year” award.

There is no way to date a footprint, but we do have two techniques for fixing in time the mud into which those ancient feet sank. We can get a rough sense from magnetized particles in the mud, because every 450,000 years or so the earth’s magnetic poles reverse direction. When the Happisburgh mud was laid down, a compass needle would have pointed towards what we now call the South Pole, suggesting that the mud is close to a million years old; and we can sharpen that up with the second technique, looking at fossils (above all, voles’ teeth) in the sediments, indicating a date 850,000–950,000 years ago.

The excavators speculate that a little band—perhaps five people, some of them children—made their mark on this ancient strand while gathering shellfish and seaweed for a meal. We do not know what kind of proto-humans they were, since they left no bones behind them.

The earliest fossils of Proto-Britons are in fact only half as old as the Happisburgh footprints: a shinbone and two teeth found near another ancient riverbank at Boxgrove in Sussex, belonging to a tall, muscular, forty-something Heidelberg Man (in a tradition going back to the 19th century, archaeologists divide pre-humans into categories called “So-and-So Man”—often named, as in this case, after the place where the first example was found. These creatures—strangely like us, yet strangely not—evolved about 600,000 years ago, probably in Africa, and were ancestral to both Neanderthals and ourselves.

Following another long-standing tradition, this Heidelberg Man’s excavators christened him Roger, after the volunteer who dug him up. The prehistoric Roger apparently lived during one of the balmier breaks in the ice ages, when Proto-Britain was even warmer than the Isles are now, and rhinoceros and elephant roamed across southern England. A simple climatic pattern shaped what Proto-Britain’s geography meant.

During warm, wet breaks in the Ice Age, such as Roger’s day, imbalances created by new kinds of proto-humans evolving in Africa or Europe would keep evening out until they reached the edge of the world along the Atlantic; but in colder, drier phases, geography did what Michael Foot and Tony Benn could not. Ice and dust turned Proto-Britain and much of the rest of the territory north of the Alps and Pyrenees into uninhabitable wastelands, effectively taking them out of Europe.

However, there was a complication: while global warming could make Proto-Britain part of Europe, too much global warming, like too little, could take it out again. Around 450,000 years ago, the collapse of a melting glacier in what is now the North Sea released a vast lake of frigid water which had been trapped behind it. For months on end, more than a million tons of water rushed through the breach every second of every day, gouging valleys and distinctive, teardrop-shaped hills into the floor of what is now the English Channel. The tsunami blasted through the high chalk ridge that had linked modern Dover and Calais, carving out the depression we now call the English Channel and turning Proto-Britain into Proto-British Isles.

In this dramatic fashion insularity entered Britain’s story and created a climatic Catch-22. When the Isles were warm enough to live in, the English Channel would be full of water, and, whatever their other skills, Roger and his kind could not cross 34 km of open sea. But when Europe got cold enough for falling sea levels to turn the Channel into a land bridge, it was usually too cold for anyone to cross it and live in Proto-Britain. Climate amended Thatcher’s Law: the Isles could only be part of Europe when, like Baby Bear’s porridge in the Goldilocks story, they were neither too hot nor too cold but just right. Ice in the Channel and water in the Channel both cut Britain off.

So far as we know, the long period between about 400,000 and 225,000 years ago saw no Goldilocks moments. Britain remained empty of proto-humans until a brand-new imbalance emerged: the evolution of Neanderthals about 300,000 years ago, either back in the African core or somewhere on the European frontier. Hardier and cleverer than Heidelberg Men, they could cope better with the cold. Eighteen of their teeth show that they had migrated as far north-west as Pontnewydd in Wales by 225,000 years ago.

For the next 250 centuries they made Proto-Britain’s tundras their hunting grounds (their bone chemistry reveals that they were prodigious eaters of red meat). They disappeared only when, somewhere around 160,000 years ago (the dating is still unclear), a new megaflood—even bigger than the first one—carved the English Channel even deeper. Cut off from Continental reinforcements, Britain’s Neanderthals went extinct, and there are no certain signs of humans in the Isles until temperatures again hit a Goldilocks spot some 60,000 years ago, cold enough for the waves to withdraw from a land bridge but warm enough for Neanderthals to migrate north-west as far as Derbyshire. Beyond that, not even they could go. 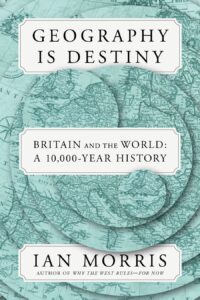 From Geography Is Destiny: Britain and the World: A 10,000-Year History by Ian Morris. Used with permission of the publisher, Farrar Straus and Giroux. Copyright 2022 by Ian Morris.

Ian Morris is the Jean and Rebecca Willard Professor of Classics and Professor in History at Stanford University and the author of the critically acclaimed Why the West Rules—for Now. He has published many scholarly books and has directed excavations in Greece and Italy. He lives in the Santa Cruz Mountains in California. 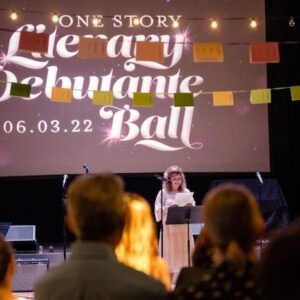