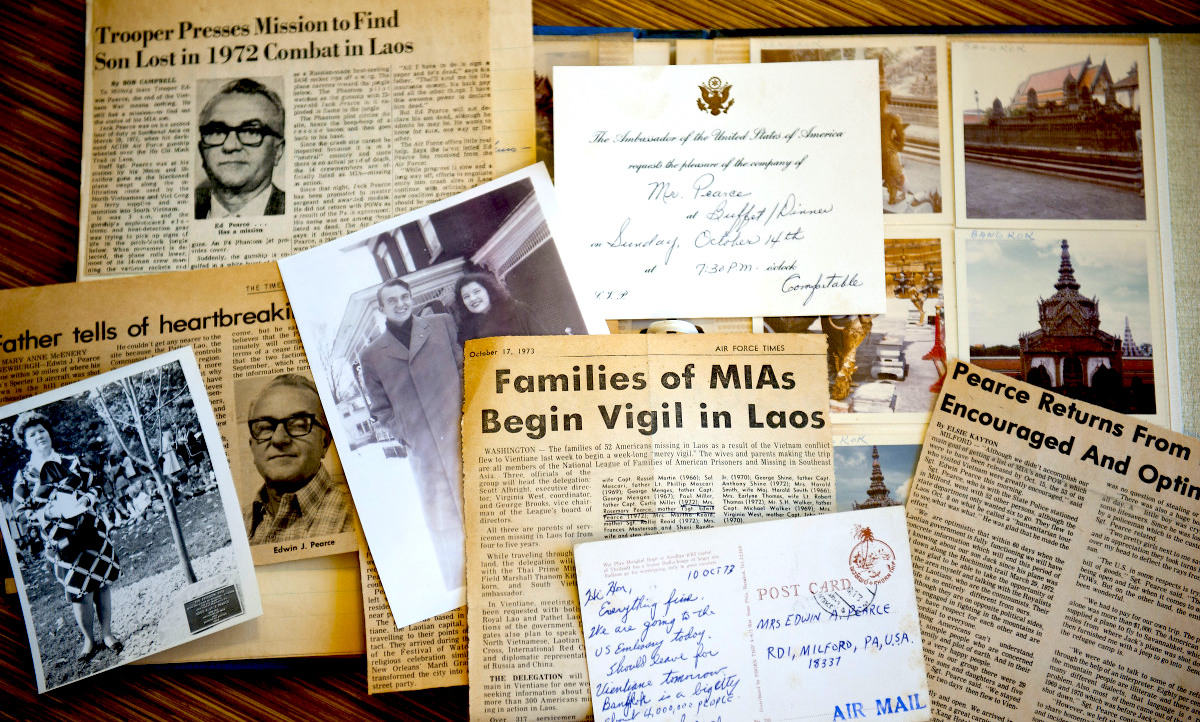 Jessica Pearce Rotondi on the Family Saga of Her Missing Uncle

I was reading old family letters in bed when it slipped out of an envelope and into my lap: the aluminum dog tag that had hung around my uncle Jack’s neck in 1972, the year he disappeared during the CIA-led “Secret War” in Laos.

I had inherited the letters from my mother, who died of cancer when I was 23. After her death, I discovered boxes of declassified CIA documents, maps, and letters in her closet detailing my family’s 36-year search to bring my missing uncle home. He was a man my mother never talked about, even though I lost her at the same age she lost him.

I had grown up with stories of my grandfather’s heroism in World War II. He jumped out of a burning B-17 bomber over Germany, was captured by the Nazis, and survived two winters in Stalag 17. We never talked about how his firstborn son—my mother’s big brother—had followed his father into the Air Force only to have his plane shot down over the mountains bordering Vietnam. 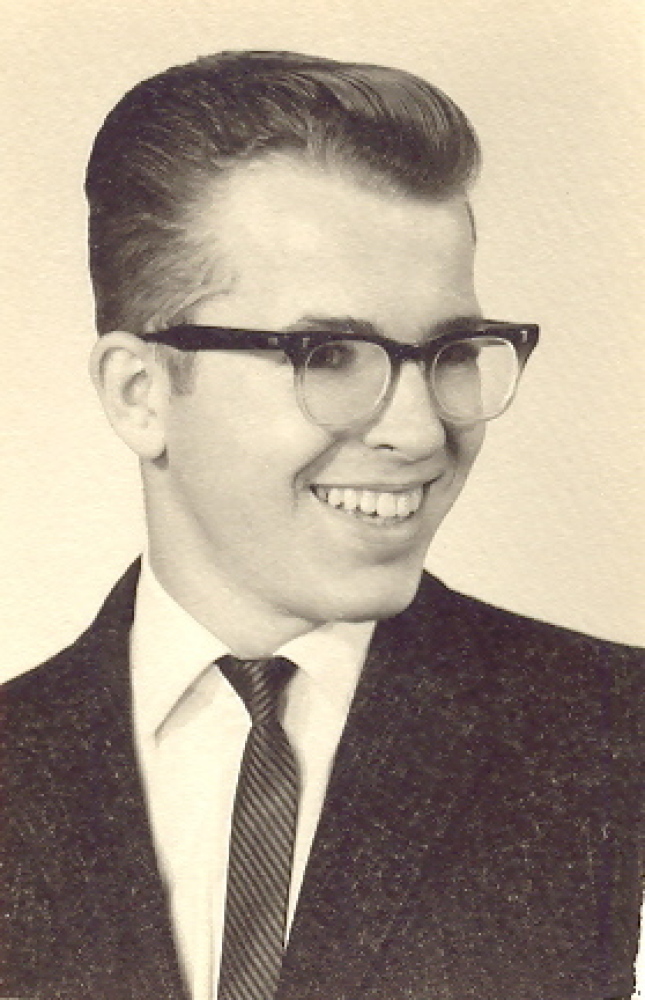 When I found Jack’s dog tag, I was working 50 to 60 hours a week as a journalist. I knew I wanted to write about the war that left Laos the most heavily bombed country in the world, but five years after losing Mom, I was only a part of the way through the boxes she had left behind. I worked on the book either late at night or early in the morning, before the news cycle took over my waking life.

That cold piece of metal changed everything. It snapped me out of the role I had been trying to inhabit as impartial reporter and put my grandfather’s very real, very present grief in my hands. This was as close as Mom got to holding her brother again. That tag was the closest I would get to talking to Mom about her grief. I took it as a talisman. In 2013, I followed the paper trail my family left behind and traveled to Laos, recreating a trip my grandfather had taken in 1973 in search of his son.

There was a heart-stopping moment when my grandfather was introducing himself to the “uniformed jury of hangmen.”

Original drafts of What We Inherit relied heavily on my journalist’s training; I quoted blocks of text from my grandfather’s and mother’s letters, words that contained the world to me, but didn’t have the same resonance for early readers. A primary document is a primary document, no matter how interesting to the researcher, and I wasn’t trying to write an academic book. I needed the passages about my grandfather’s hunt for his son to have the same urgency as my interviews with CIA officers and refugees.

That tag falling into my lap was my Newton’s apple moment for the book’s structure. The tag was shipped home with a letter to my grandfather just prior to Christmas 1984, the year before I was born. I knew my mother was visiting her parents that holiday and that she had just suffered a miscarriage. I wanted the reader to be in the body of a father without his son’s body to bury, holding this piece of him after 12 years of fighting for news. To feel my mother’s double losses, one hidden and one in her hands.

I went back to the primary documents and transformed them from block quotes into the building blocks of fully realized scenes. I picked moments where I had multiple sources, like the 1979 status reviews hearing at Randolph Air Force Base where my grandparents—who had no formal education beyond a high school diploma—stood up to Air Force colonels who were trying to change their son’s status from missing in action to killed in action, despite reports that he was potentially alive. 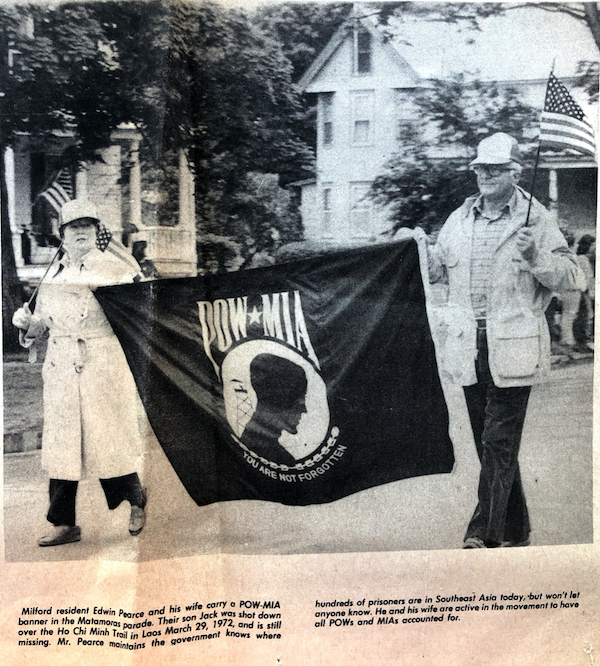 The author’s grandparents, Ed and Rosemary, marching in a Memorial Day parade with the POW/MIA flag.

Reading the full transcript of the trial from the Air Force stenographer was like being in the courtroom with them. There was a heart-stopping moment when my grandfather was introducing himself to the “uniformed jury of hangmen,” as he called them, and accidentally switched the date of his shoot-down in World War II with the date of his son’s crash:

As well as being the parent of Sergeant Pearce, I was also a combat pilot in World War II. I participated in one of the largest air battles ever fought, the Schweinfurt and Regensburg raid of 1973. I was shot down on October the 14th, 1942 and was a prisoner of war until 1975 in Stalag 17…

That told me everything I needed to know about his state of mind. I spoke with living relatives who had talked to my grandfather after he drove all night to get from Pennsylvania to Texas for the trial and read his medical reports from the time. The dialogue throughout “The Trial” chapter is recorded verbatim from the stenographer’s records of that day.

My grandfather retired early from the Pennsylvania State Police to devote himself full-time to the search for his son.

I incorporated his therapist’s notes from the “mental hygiene clinic” (yes, really!) offered by the Veteran’s Administration hospital for former prisoners of war. I looked at photographs of his EKGs on clinic days, holding my grandfather’s heart in my hands. In a way, this book is his heart. It’s the story of his life’s work. My grandfather retired early from the Pennsylvania State Police to devote himself full-time to the search for his son. He died believing his son still lived. The papers I inherited were a love letter to his firstborn and what got me through my own grief. To me, nonfiction is an act of translation, and the task for the writer is to bring dead letters to life.

Between 1964 and 1973, the United States dropped two and a half million tons of bombs over Laos, or a planeload of bombs every eight minutes, twenty-four hours a day, for nine years. My uncle was one of the Americans dropping those bombs. Traveling to the last known place he was seen alive and meeting with people who survived the bombings drove home for me the need to make this book reach as many people as possible so that what happened in Laos does not remain shrouded in secrecy, like it was in my own family.

Today, more articles on the war are being written as new information is declassified. I did extensive investigative reporting to write this book. But history is at its most powerful when it becomes personal. I think of Sebastian Junger writing about war or Sarah M. Broom’s writing about New Orleans; every nonfiction book I have ever loved had something of the author in it.

For me, it was letting go of those boundaries between self and story that allowed me to fully realize What We Inherit. As a writer of nonfiction, my job is to tell readers the truth. Presenting the book in this way felt like the truest way to tell my family’s story. 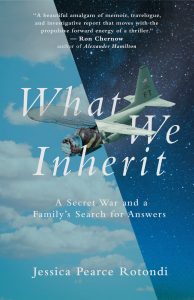 Jessica Pearce Rotondi’s What We Inherit is available now from Unnamed Press.

Jessica Pearce Rotondi is a writer and editor living in Brooklyn. Her work has been published by The History Channel, Atlas Obscura, The Huffington Post, Refinery29, and Greatist. Previously, she was Senior Lifestyle Editor at The Huffington Post and a staff member at the PEN American Center, the world’s oldest literary human rights organization. Her first job in New York City was as a book publicist at St. Martin’s Press, where she had a “room of her own” in the Flatiron Building to fill with books. Jessica is a graduate of Brown University, where she received a research grant to conduct an oral history project on World War II. What We Inherit is her first book.

The Last Thing She Wrote 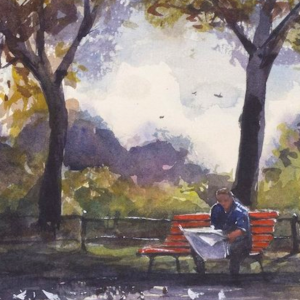 The Last Thing She Wrote

When I first read Amy’s brilliant piece, I was blown away by the prose. I felt humbled that the last project she worked...
© LitHub
Back to top
Loading Comments...