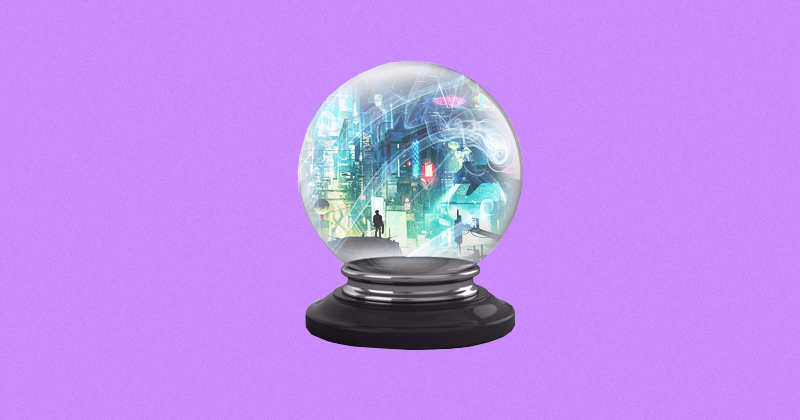 How Can Fiction Predict a Future That’s Already Happening?

Andromeda Romano-Lax on the Real Stakes of Speculative Fiction

The problem with setting fiction in the near future is that it keeps coming closer—and usually about twice as fast as one expects. By mid-century, will we still stare at our phones? Or will we instead use bionic contacts (already in development) that project images of our incoming texts? Will we even call those brief messages “texts”?

Speculative fiction pioneer William Gibson likes to inform interviewers that the true point of sci-fi is not to prognosticate. (His classic Neuromancer, written in 1984 and set in about 2035, failed to predict mobile phones, as did the movie Blade Runner, in which clunky, stationary videophones predominate.) And yet: a would-be speculative novelist winces imagining their invented world becoming obsolete only years after a book appears. Worse still, one doesn’t want to include details that are passé even prior to publication. In our fast-moving world—Amazon’s Alexa made her debut in late 2014 and starred in a Super Bowl ad that counted on pop-culture familiarity only three years later—the chances of getting the near-future wrong are greater than ever. Yet more and more novelists, intent on penning semi-realistic sci-fi hybrids, seem to be taking the chance.

When I first imagined a novel set in 2049 about a much older woman and the robot delivered to care for her, threatening the livelihood of an immigrant nurse, the world was a different place. The iPhone was a year old. I wasn’t even using a dumbphone yet. iPads, Fitbits, and voice assistants like Siri weren’t on the market. I’d never downloaded an app, making me an unlikely novelist to guess what the world might look like a few years hence. Just the fact that I’d use a word like “hence” probably undermines my reputation as an aspiring futurist.

Some aspects of the future I envisioned were already well established. In 2007, South Korea had announced the need for an ethical charter for robots—not only to protect humans from AI, an old trope, but also to protect vulnerable future androids from people. Author David Levy published Love and Sex with Robots, which predicted that human-robot marriages could be expected by 2050. He has since gone further, claiming that robots and humans will be able to make offspring, based on recent advances in bionanotechnology. Many years ahead of movies like Her (2014) or Ex Machina (2015), that news item planted a seed. I began to wonder: do we really want social robots advanced enough to replace human relationships? To what extent should we automate the care of elders, children, and other vulnerable members of society? Should we not only be afraid of robots who will make war, but also of robots who will make love?

“Who are we becoming, as individuals and as a society? To what extent are we shaping technology, and to what extent is it shaping us?”

My book isn’t really about gadgets or predictions, and I don’t expect to come close to envisioning the future of these technologies. Even as I was writing it, I had to rejigger the plot, bringing it up 20 years in response to the speed with which technology had already changed. What hasn’t changed is my true subject: immigration, labor, the environment, and identity. Most fundamentally, my book is about relationships, about secrets kept and revealed, connections lost and made. The forecast it offers is less about what kind of robot could hit the market in 2029 than why we would need such a robot at all, as well as what consequences may ensue. Who are we becoming, as individuals and as a society? To what extent are we shaping technology, and to what extent is it shaping us? Are we happy with the possible futures we are generating?

My favorite speculative fiction, just like my favorite historical fiction, is neither escapist nor distant; in fact, it is sneakily but urgently reflective of problems bearing down on us today. Sometimes, this type of fiction does its most powerful work addressing the issues that we, both collectively and individually, aren’t culturally or emotionally ready to face. Where journalism hits the door of denial, fiction can worm under the sill and through the cracks, showing rather than telling: This can happen. Or even more powerfully: This is already happening.

Incremental change that may lead us to disaster—the slowly-heating pot of water that the complacent frog doesn’t realize is coming to a boil—is a great supplier of speculative fiction tropes, including in my favorite novels, which are often richly realistic, literary/sci-fi hybrids. Consider the problems of capitalism and social media use run amuck (Super Sad Love Story, Gary Shteyngart), predation of the privileged on lower classes (Never Let Me Go, Kazuo Ishiguro), infertility and abuse of immigrants (Children of Men, P.D. James), and patriarchy and the violent subjugation of women (The Handmaid’s Tale, Margaret Atwood). These books don’t engage readers because they serve as cautionary tales about distant or unlikely threats. They resonate because they reflect current conditions already underway: the first steam coming off that pot of water, full of frogs who won’t jump. Just as George Orwell’s 1984 was, as William Gibson noted, truly about 1948, these books are not necessarily about the future. If they’re really about the present, then, why not just set them in the present?

As a writer, I have my own answer. Sometimes a more exotic setting—in place or time—is simply a more interesting challenge to write. But there’s more to it than that. A century ago, Russian literary theorist Viktor Shklovsky coined the term “defamiliarization” (ostranenie in Russian) for the way in which literary language renders the familiar strange, slowing down our overly automatized processes of reading and thinking, and thereby allowing us to perceive things in a new way. Modern science echoes this concept. Nobel prize winner Daniel Kahneman (Thinking Fast and Slow) has popularized the notion that we have two systems for thinking—one fast, automatic, and often error-prone; one slow, deliberate and more logical. Slower thinking, like defamiliarization, can circumvent our assumptions, bypass our prejudices, and shock us into fresh and often more accurate awareness of our surroundings. Setting a book in a different time can have a similar effect: The world of the present, so full of the familiar, often blinds us, whereas the world of the past or future, half-familiar and half-strange, can delight and provoke us into seeing things anew. Suddenly, we notice that the pot of water is not comfortable. It’s actually getting too damn hot.

I am less of an activist than some writers, believing (like Anton Chekhov) that the role of the artist is to ask questions, not answer them. I don’t write novels with pat conclusions in mind—for example, about whether or not we should oppose our increasing dependence on artificial intelligence. I would be disappointed, in fact, if all readers drew the identical object lesson from any of my books. But there are certainly futures nearly all of us would prefer to avoid: environmental destruction, totalitarianism, violent patriarchy, loss of civil liberties, and so on.

To describe near-future worlds in which these things happen is, in some measure, not simply to forecast them, but to oppose them. While speculative fiction writers will invent things that don’t come to fruition, or fail to predict things that will become stunningly ubiquitous, those authorial failures are worth risking. I remind myself to worry less about error-free timeliness than about illuminating the path between today’s choices and tomorrow’s consequences. Perhaps Margaret Atwood put it best: “If this future can be described in detail,” she writes, “maybe it won’t happen.”

Born in Chicago, Andromeda Romano-Lax is the author of The Spanish Bow, a New York Times Editor’s Choice that was translated into 11 languages, and The Detour, as well as numerous works of nonfiction. She teaches in the low-residency MFA program at the University of Alaska Anchorage and is a co-founder of 49 Writers, a statewide literary organization. Recently, she has divided her time among Alaska, Mexico, and Asia. 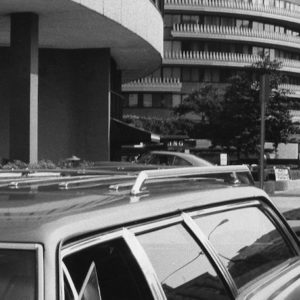 I had one thing going for me as I slunk into the Watergate scandal. It came off a tip I had received a month or two earlier...
© LitHub
Back to top