How Board Games Got Literary

Books To Games and Back Again

The cover of Sampson Starkweather’s new collection of poetry suggests something born from a stress dream or a satirical novel. The hues and fonts summon memories of nights at home around the dining room table, a game board folded out and markers, dice, and cards at the ready. Pain: The Board Game is emblazoned across the cover in a layout echoing The Game of Life in its original design. It’s a look that’s both instantly recognizable and ominously familiar. It’s also one of the few examples of literature drawing an influence from board games, rather than the reverse.

Earlier this year, I interviewed N.K. Jemisin following the release of her new novel, The Fifth Season, a fantasy novel in which characters manipulate thermodynamics in a shattered, post-apocalyptic world. Jemisin is a writer known for creating evocative, distinctive worlds. For her, the process of writing a realistic fantasy world, with believable and consistent underlying rules, relates in part to questions of the larger community. And as part of our conversation, she alluded to one of the side effects of creating a memorable setting in one’s fiction.

There are people who will make role-playing games in a heartbeat out of your books, and if you have not provided them with predictable structures and things like that, they are going to get really pissed at you. And that can be helpful, because it makes you drill down to a level of verisimilitude that most people don’t want to think about; that can create a world with a really great lived-in feel, if you do it right.

The notion of turning fictional settings into games isn’t a new one, but it’s one that has become more and more prevalent. My first exposure to a European board game came a few years ago, when I received a copy of the medieval city-centric game Carcassonne as a gift; at the time, I had no idea what it was. Settlers of Catan has gone from a game obscure in America to a plot point on Parks and Recreation; games like Pandemic and the railroad simulator Ticket to Ride can be purchased beside more familiar favorites like Jenga and Monopoly at your local big-box retailer. Whether you’re purchasing games at a large store or one of the many specialty shops dedicated to them, you’ll also find a number of games whose inspiration comes from literature. Some take on entire fictional settings; others nod in the direction of the plot of a specific work. Some come complete with extensive gaming systems; others are as minimal in their execution as a deck of cards.

Andrus Kivirahk’s The Man Who Spoke Snakish has the feeling of a folktale: it’s a coming-of-age novel about a young man who lives in the woods and can speak a language that enables him to communicate with, and sometimes control, animals. This isn’t to say that it’s a work of light fantasy, however—like Margo Lanagan’s 2008 Tender Morsels, there’s an undercurrent of violence that keeps the more mirthful aspects at a distance. In Kivirahk’s novel, bears are lascivious creatures, terrible things happen to beloved characters, and horrific acts of bloodshed are carried out by the protagonist. It’s a novel, ultimately, about modernity overtaking a more mystical, rural existence, but there are also shadings of totalitarianism and intolerance in the way that the antagonistic forces are depicted. And so, of course, it was turned into a board game in Kivirahk’s home country of Estonia, where the novel was a hit.

The fact that Kivirahk’s novel was adapted for home gameplay isn’t surprising. Its medieval setting and its plot, in which certain humans possess special abilities and different groups of animals have particular skills, is exactly the kind of milieu that Jemisin was referring to. Earlier this year, a 1998 adaptation of Stephen King’s The Shining took on a viral second life; it allowed players to choose either the Torrance family or the Overlook Hotel, and take things from there. Mervyn Peake’s Gormenghast novels were adapted as a board game by the British company Sophisticated Games in 2013, and Bezier Games released Enter the Passage, a card game inspired by the post-apocalyptic vampire novels in Justin Cronin’s The Passage trilogy, in 2012.

Among the first instances of literature intended for adults being turned into a board game came in 1960, when a game based on Raymond Chandler’s Philip Marlowe novels was released. (To be fair, the design of the game’s box art suggests that it may have been designed to tie in more with a 1959 television series adapting Chandler’s character than with the novels themselves.) Looking at the game board and accessories makes for a surreal experience: the board is beautifully designed, but the aesthetics don’t necessarily signify the game’s roots in hard-boiled detective fiction. In the 1980s, the ties between the worlds of board games and science fiction and fantasy were drawn closer when Mayfair Games adapted the likes of Anne McCaffrey’s Pern novels, Piers Anthony’s Xanth novels, and Joe Haldeman’s acclaimed novel The Forever War as games. Although Settlers of Catan and various adaptation and expansions occupy much of the contemporary iteration of the company, that tradition does persist via an adaptation of Terry Pratchett’s Discworld novels.

Sometimes fictional settings can get blurred, as with this 2012 game that blended George Orwell’s two best-known novels into one board game, titled 1984: Animal Farm. (As of now, there has been no sequel; I can only hope for the announcement of Homage to Catalonia: Down and Out in Paris and London, where one can play as a dishwasher, an unemployed writer, or a revolutionary anarchist.) And it should come as no surprise to see that two of the biggest literary board games take their settings from, respectively, George R.R. Martin’s A Song of Ice and Fire and H.P. Lovecraft’s Cthulhu mythos.

Both games come from the Minnesota-based company Fantasy Flight Games. Call of Cthulhu—for which Fantasy Flight recently announced that they had ended development—is a long-running card-based game, with numerous expansions created and released over the years. A Game of Thrones: The Board Game predates the HBO adaptation of Martin’s novels by many years; the first edition was released in 2003, and a revised edition followed in 2011. Not surprisingly, the angle here is military and strategic; echoing the novels, players are able to choose of several factions, taking over territory and fighting numerous battles along the way. At times, playing the game can seem like watching an alternate version of one of Martin’s books play out in front of you. And for all that it’s an expansive game, it also doesn’t attempt to take in all aspects of the world that Martin created, nor does it replicate each aspects of his series’s plotlines. It’s a satisfying work, both on its own merits and as an adaptation.

As game development becomes more widespread, so too have designers found new ways to attract attention to (and money for) their work. New York’s King Post Games held a successful Kickstarter campaign in 2013 for Moby-Dick, or, The Card Game, their adaptation of Herman Melville’s novel. Their version of Moby-Dick is both compelling and faithful in its translation of the bleakness of Melville’s ending: rather than winning per se, a game’s winner is the final player left alive after the white whale attacks.

“I don’t think it’s an accident that our first adaptation was Moby-Dick, because of Melville’s obsession with telling us exactly how whaling works, right down to the structure and quality of the rope, the little notch of wood in the front of the boat, etc,” said Joel Clark, creative director for the game.

Many of the cards used for gameplay incorporate Melville’s prose directly. For Clark, this was critical. “From day one our priority with the Moby-Dick, or, The Card Game was fidelity to the source text,” he said. “The work is so beloved, and held so precious by so many (including ourselves), it seemed sacrilege to manipulate or bend Melville’s words.”

King Post is now at work on an adaptation of Beowulf, also the recipient of a successful Kickstarter campaign. Clark mentioned returning to ways that the Middle Ages are understood as part of the process behind the game. “I think there’s often a discrepancy between the real or intended meaning of a book and how it’s seen and understood by the broader culture,” he told me. “I like to think that our adaptations can exist as a means of connecting the two and providing points of access to great literature for people who wouldn’t necessarily tackle a big, complex, or challenging book.”

Still, the process of looking at books with an eye towards translating them into some form of gameplay has had an effect on the developers. “I worry that I’m ruined on reading great works now that we’ve done that,” Clark said. “[E]very book I take up I’m obsessing over the systems at work in the plot, the characters’ winning and losing traits, and I’m imagining grand metaphors as spaces on a board. Yikes!” Whether game creators are looking towards centuries-old works or seeking contemporary fiction with a well-thought-out setting, the process of turning prose and plot into the numerous elements of gameplay is its own arduous task. The rewards may seem somewhat different, but the way that both can capture imagination and attention help to bring the process full circle.

Battling the Gods: Atheism in the Ancient World 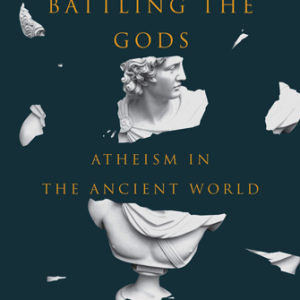 Battling the Gods: Atheism in the Ancient World

Plato and the Atheists Athens in 399 BC was a fearsome place to be. In 404 the city had fallen to the Spartans, after 27 bruising...
© LitHub
Back to top
Loading Comments...