How Billy Joel Taught Me To Write

My mother was a Billy Joel devotee. She’d remove my dad’s cassette tape of Soft Metal from the stereo as soon as we got in the car and replace it with Storm Front. There was no rewinding or fast-forwarding: we’d re-join the album at the point where she’d last left it, usually halfway through one of its more turgid tracks (“That’s Not Her Style” or “When in Rome”). We’d be on the way to my grandmother’s house, taking the convoluted scenic route. I’d get carsick in the back while we meandered through the countryside of West Lancashire. As soon as we reached “Leningrad,” my nausea would ease, and the world outside the window would dissolve. A reverential silence would fall between us.

“Leningrad” is one of several Billy Joel songs that toe the line between artful sentimentality and roll-your-eyes corniness. It tells the story of Viktor, a boy raised in the Soviet Union at the same time as Joel himself was growing up in McCarthy-era America, and how the two of them went on to meet as adults in Leningrad (“He made my daughter laugh and we embraced / We never knew what friends we had until we came to Leningrad”). When I first heard it, I was eight years old, and I’d never experienced a song quite like it. I didn’t just connect with its melody, the way I had with other memorable songs: I admired it for the skill of its construction, the depths it held, the way the music and lyrics informed each other.

Of course, I lacked the terms by which to understand it, but I seemed to know that “Leningrad” was a song that told a story with a clear dramatic structure, that it hinged on two contrasting narrative viewpoints, that it had roundness, political themes, a strong sense of humanity; that it managed all this inside the limitations of a rhyme scheme and a scaffolding of verse-verse-chorus, verse-chorus-verse. Perhaps I understood this because my mother always spoke about the song in such glowing terms (it was her favorite on the album), but I suspect not.

The first lesson I took from Billy Joel’s Storm Front was a sense of wonder at what was possible to convey with words, how transporting they could be. I could imagine every scene he evoked in “Leningrad” from the terror of kids kneeled “under their desks in an air raid drill” to Viktor’s solemn life in “some Red Army town” and his training as a clown; and I could picture the Long Island fisherman narrator in “Downeaster Alexa” eking out a living to support his family, too. That was the second thing I learned from Billy Joel: how the right words placed in the right order can foster empathy with characters, ground you in their consciousness, give you insight into lives so different from your own. They broadened my imaginative capacity.

This second lesson only registered with me when I got a little older. At ten years old, I developed an obsession for Joel’s back catalogue. My mother owned his Greatest Hits: Volumes I-II, and I listened to these tapes on loop. There was one track that I never tired of: “Goodnight Saigon.” Even now, when I set my iPhone to shuffle and the song happens to play, I feel a prickle of excitement. I hear the hum of crickets and the distant rumble of a helicopter, then bold piano chords and the tinny strum of an acoustic guitar, then Joel’s voice breaking slightly: “We met as soul mates on Parris Island / we left as inmates from an asylum.”

I had no obvious right, as a ten-year-old living in the peace of 90s northern England, to feel so immediately invested in a song about soldiers in the Vietnam War, but I did and still do. It conjures the experience of young Americans fighting a futile jungle war with such skill and compassion that even a ten-year-old English kid with zero understanding of the social or political context can glean the sadness of their situation.

The lyrics operate on an unusual A-B-A-B-C-D-D rhyme scheme—that’s one of the many well-considered elements of the track. It also adopts an intuitive first person plural viewpoint, each verse allowing us to share in a collective experience. (I’m wondering now how much of this song informed my approach to the opening chapter of The Ecliptic? Probably a fair bit.)

“Goodnight Saigon” explores the fates of its young soldiers with great elegance: “We came in spastic, like tameless horses / We left in plastic, as numbered corpses.” Ah, those two word choices, “spastic” and “tameless.” As a kid, I found them so moving and poetic. “Spastic” was a pejorative word in my school life, and I’d never heard it meant in any other sense: I realized it wasn’t viewed as derogatory in American usage and it captured something particular about the mindsets of the soldiers that no other word could. “Tameless” was new to my vocabulary: a lazier writer would have settled for “wild” or “untamed” here, but not Joel; “tameless” implies loss as well as blitheness, and the cadence of it in union with “horses” is more affecting than any other adjective he could’ve placed there. In other songs of Billy Joel’s that I dislike or don’t remember (and there are many), this level of precision in the language is absent. But those tameless horses have stuck with me. They’re the work of a brilliantly perceptive writer.

My next lesson came when I was twelve. Since Storm Front, my mother and I had been waiting impatiently for the release a new album, and Joel delivered it in 1993—it would turn out to be the last studio recording he ever released. My mother listened a few times but it failed to delight her. I gave it more of a chance.

That River of Dreams is one of the most over-produced albums of the 1990s (and that’s saying something) didn’t help its cause. The record has so much variety and so little congruence: from state-of-the-nation polemics (“No Man’s Land”) to Sondheimy ballads (“Lullaby”), from tepid New Orleans jazz riffs (“A Minor Variation”) to ecstatic gospel (“The River of Dreams”). There aren’t many standout tracks—“All About Soul” is one of them, as good a radio-friendly love song as you’ll hear—but there was something about the melody of “Blonde Over Blue” that wouldn’t leave my twelve-year-old head.

The song’s meaning was elusive. I only liked the sense of atmosphere and malaise it summoned in the verses: “In hell there’s a big hotel / where the bar just closed and the windows never open / No phone so you can’t call home / and the TV works but the clicker is broken.”  That implicit rhythm—da-da, da-da-da-duh-duh­—was so arresting. I kept skipping back the CD to hear the verses on their own. I wanted to spend longer in the throes of them, but the chorus kept interfering. So, one day, I decided I would write new words to fit Joel’s meter.

I had written funny rhyming poetry as a kid, but I’d never tackled serious themes (I remember feeling this—that I should be writing something serious). My father had an electric typewriter in his office; I asked if I could use it; he obliged. Over the course of a Sunday afternoon, when I should’ve been doing homework, I composed my own lyrics for “Blonde Over Blue,” building words upon Joel’s outline.

The piece was ambitious and opaquely titled: “Crime.” I intended it to give a coruscating overview of humanity’s societal issues and their consequences. You can probably imagine how well this subject matter was handled by a twelve-year-old from a quiet English suburb. What can I say? I was precocious, except I made sure to play a lot of football to avoid getting beaten up by the less precocious kids. And I know that this small episode of my childhood accounts for so much of who I am and what I do today.

Devising my own words to serve Billy Joel’s melody is where I discovered the true thrill of writing. It instilled in me a fussiness about prose rhythm, and the joy of the process remains there for me, in the adjustment and refinement of each sentence to ensure its flow and impact. Any good sentence I’ve composed as a novelist (there must be one somewhere) has a lot to do with the unwitting tuition of Billy Joel. He inspired me to sit down and put words on a page. He taught me to appreciate the difference between a lazy rhyme that deadens a line and a surprising rhyme that elevates it. He made me understand that word choices (like “tameless” over “wild”) are an important part of the writer’s work. And he gave me the vital experience of stepping out of my own headspace, to project my imagination and empathy onto the life of another person. That’s the only reason I forgive him for not making records any more.

Benjamin Wood was born in 1981 and grew up in northwest England. A former Commonwealth Scholar (receiving his MFA from the University of British Columbia), he is now a Senior Lecturer in Creative Writing at Birkbeck, University of London. His debut novel, The Bellwether Revivals, was shortlisted for the Costa First Novel Award 2012 and the Commonwealth Book Prize 2013, and won one of France’s foremost literary awards, Le Prix du Roman Fnac, in 2014. He lives with his wife in London.

The Life and Times of a True American Moral Hysteric 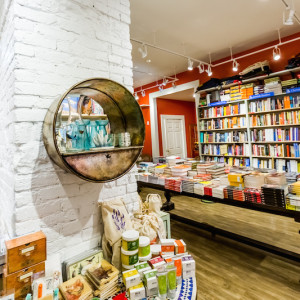 Book Culture's first location opened as Labyrinth Books in 1997, run by Chris Doeblin and his partner at the time, Cliff...
© LitHub
Back to top