How André Breton Disdained Possessions Before It Was Cool

In this episode, co-hosts Catherine Nichols and Sandra Newman discuss André Breton’s First Surrealist Manifesto from 1924. Why were the demands of the surrealists such a lasting influence on 20th-century art? Are they revolutionary or insidiously counter-revolutionary in their meaning? Mentioned in the episode is Catherine Nichols’ essay about privilege and the avant garde, “A God-awful Small Affair.”

Catherine Nichols: He hates realism in general, and novels, because he thinks that the objects in your life that you own and encounter are entirely a matter of chance, so if you describe a character by describing what objects he owns or encounters, you’re describing only the obsessions of people who want to quantify and determine how valuable something is by how much it costs or how much money somebody earns as their entire value. It’s that kind of thinking which he describes as “you can remember how many women you’ve had sex with, but not the feeling of love.” So he dislikes realism that describes objects in a room, but loves dreams because those are objects that are only meaning. Right? Did you get the same thing from it as I did? Because it’s a little difficult to read and get meaning from.

Sandra Newman: It is. He does not edit, you could tell. He was not concerned to be understood that much. I think it’s interesting because in a lot of ways, we’re dealing with a lot of ideas that are familiar and remain to some degree current today, but he’s much more rigorous about pursuing them to their logical conclusion. He’s not only against the idea of possessions and the importance of the physical world—he’s ultimately, by the end of it, sort of advocating that everyone should behave as if the physical world doesn’t exist. Not only write as if it doesn’t exist, but behave as if it doesn’t exist. And behave as if we’re immortal and can’t be harmed by crimes that we commit against each other in the name of surrealism. 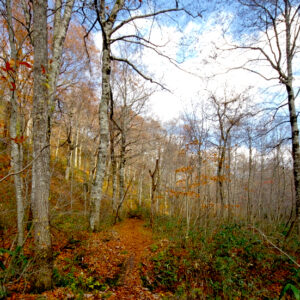 In early June of 2019, I found myself crouching in a beech forest near the peak of Mt. Moriyoshi in Akita Prefecture with...
© LitHub
Back to top