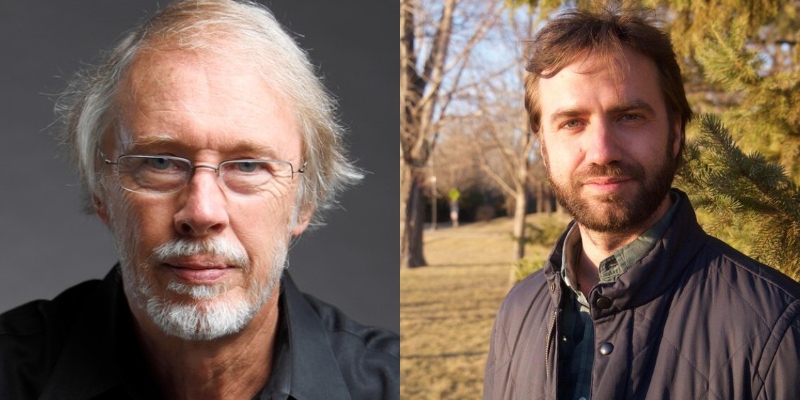 Hope on the Horizon: Charles Baxter and Mike Alberti on Despair and Renewal in Fiction

In this special live episode of Fiction/Non/Fiction, presented by Moon Palace Books in Minneapolis, acclaimed novelist and teacher Charles Baxter and his former student, short story writer Mike Alberti, join co-hosts Whitney Terrell and V.V. Ganeshananthan to discuss their new books. Upon the release of his seventeenth book, the much-anticipated The Sun Collective, Baxter reflects on how time and place factor into his work and talks about writing about politics in his hometown. Then Alberti discusses his searing debut short story collection, Some People Let You Down, and how he finds inspiration and hope in teaching incarcerated writers through the Minnesota Prison Writing Workshop. The two also provide a rare window into their ongoing conversations about teaching and the craft of fiction, and answer questions from audience members and readers, including incarcerated writers.

To hear the full episode, subscribe to the Fiction/Non/Fiction podcast through iTunes, Google Play, Stitcher, Spotify, or your favorite podcast app (include the forward slashes when searching). You can also listen by streaming from the player below. And check out video excerpts from our interviews at Lit Hub’s Virtual Book Channel and Fiction/Non/Fiction’s YouTube Channel. This podcast is produced by Andrea Tudhope.

Whitney Terrell: Mike, I wonder if we can begin by talking about your collection. Your stories touch on people and places that find themselves at moments of change, both despair and renewal, particularly in small towns, some of them nearby here—I’m in Kansas City. The descriptions of places are beautiful. They cover a huge span of time, and they’re also carefully, subtly linked. I was reminded of the connections in Charlie Baxter’s work, particularly There’s Something I Want You to Do. How did you think about connecting your stories and what sorts of conversations did the two of you have about that when you were building this collection?

Mike Alberti: That’s such a good question; I’m so happy that those subtle linkages between the stories came through. I never really set out to write a linked collection. For the most part, the book grew organically out of my particular interests and preoccupations, especially, as you mentioned, with place and with the natural world. There was a thematic linkage in the early stages, but not much more than that. In what I think was my first class with you, Charlie, you introduced us to a concept called the “novita,” which I believe you invented. One of the great pleasures of being Charlie’s student is that you get to learn this incredibly rich and useful vocabulary that he has created for thinking about what fiction is and how it works. Charlie, you can correct me if I describe this incorrectly, but the novita is a form of fiction that’s somewhere between a novel and a collection of short stories, in which the different parts are linked together but also build to a cohesive conclusion. Charlie’s book, There’s Something I Want You to Do, is a great example of that.

In that class and in future classes with Charlie, I became interested in the use of images that are repeated in a story—something Charlie calls “echoing imagery.” Eventually, that became the method I found for tying my own book together. Although there aren’t really recurring characters, and the stories take place in different settings and different times, there are certain images that repeat themselves throughout, especially the image of an abandoned town in western Kansas, which comes to exert a kind of gravity over the book. You can return to that over and over again in the different stories. My hope was that this kind of repetition would give readers a sense of both circularity and forward movement, as though the stories are demanding to be retold again and again in different versions.

Charles Baxter: In that class, when we were talking about the novita, one of the points I hoped to make was that linked stories are particularly good at depicting communities. I can’t remember whether we read James Joyce’s Dubliners and Sherwood Anderson’s Winesburg, Ohio. I think we did—

CB: And Edward P. Jones’ Lost in the City, which is about the African American community in Washington, D.C. I do remember trying to convey to everybody that these sorts of stories oscillate between stories of development. They tend to focus on young people, adolescents, young adults—as many of your stories do, Mike—and the way communities form and disperse. When I began to read your stories, particularly in the second year you were at Minnesota, I noticed there was a kind of community growing in the stories you were writing, and that’s when I thought they really began to show a direction.

V.V. Ganeshananthan: Charlie, place figures heavily in your work, too. As with some of your previous work, Minnesotan readers will recognize familiar spots. That was one of the pleasures of reading for me. There’s the Utopia Mall, which is really the Mall of America; the light rail, where the book begins; Minnehaha Falls—many other places. In your book, an older couple, Harry and Alma Brettigan, search for their misplaced son, an actor who has drifted into involvement with the group of the book’s name, which is, as Harry Brettigan calls it, an “earth-improvement project.” They meet some Sun Collective members. Minnesota Prison Writing Workshop student Will sent in two questions I’m going to combine here. Can you talk a little bit about coming to the point where you invent this political entity, the Sun Collective—they’re very funny—and why this is an activist group that starts here in Minneapolis?

CB: It’s a great question and I hope to do justice to it. When you’re working on a book, you have to find a way of giving your imagination a home. I think some writers go back to the scenes of their childhood and their adolescence, but I tend to write about the places where I’m living—all of that just begins to seep in on you. Because I was walking around the city, I was thinking about Minneapolis, thinking about some of the radical movements that were located here. Particularly in the 1930s, there was a very strong movement of communists—followers of Trotsky, mostly in the Truckers Union—and around the same time, a fairly sizable fascist group called the Silver Shirts, who were standing in opposition to immigration and to unionization. The city has a very active political past and a lot of political figures have come from here, including Hubert Humphrey, Eugene McCarthy, and many others. I thought it was natural for me to locate a group like the Sun Collective in northeast Minneapolis and to have them in some sense recapitulating some of the political history of the city.

WT: Yes, the question could be: what political activist movements don’t start in Minneapolis, Minnesota, in some ways?

WT: Does that mean you’re in the “thundering herd” as well? I know you grew up in Minneapolis; are those your homeboys you’re walking around the mall with or did you make that up?

CB: You know, I’m not crazy about the Mall of America. However, I was out there early one morning in the winter and saw several groups of senior citizens doing their power walking around the mall. I thought it was kind of great and hilarious, and so in it went. You see something, it goes in the book.

WT: Mike, how about you? In your day job, you do social justice work. How do political crises or social injustices find their way into your writing, or how do they not find their way?

MA: There are a lot of people in this country right now who feel a kind of pervasive despair. A sense that any bright future they imagined for themselves or for their kids is being foreclosed on. I think I would call that a political crisis. In this book, I’m writing about people in these dying towns where maybe they’ve seen the local factory jobs disappear. But I sense another version of that feeling among people I know, friends here in Minneapolis, people thinking about climate change, for example, and what that means for our collective futures and how we think about them. I’m drawn to trying to represent that feeling, that despair—which, Charlie, you do so well among the young people in your book—and not just this despair, but the anger that that arises out of that.

Whitney, you mentioned my day job as managing director of Minnesota Prison Writing Workshop, which is an incredible organization that teaches creative writing classes in Minnesota State Prison. We try to support incarcerated writers in a lot of other ways. Sugi is also very involved in our work as a mentor and board member, and Charlie has been kind enough to visit our classroom several times. It might surprise people to hear that the people who have inspired me to be more hopeful and less despairing about the future—both in my life and in my writing—are the incarcerated writers that I work with through MPWW. These are men and women in the most isolated, dehumanizing conditions, more so now than ever, and still they manage to make beautiful art and build community and organize together to make their lives better.

Charlie, I don’t know if you remember this: I think it was probably your last visit with me to class in one of the prisons—you talked about how every short story or every work of fiction is a kind of hypothetical world. That was something we all really latched onto. For the men in that class who don’t have a lot of power to change their immediate material circumstances, imagining a different world can be a really revolutionary act. That’s a standard I’ve tried to live up to in my own work since then—not just trying to realistically and accurately portray the world as it is in all of its grimness, but also to take another step and think about how fiction can imagine other worlds and ways in which we might live together.

Transcribed by https://otter.ai. Condensed and edited by Emily Standlee and Andrea Tudhope.

How the Specter of Islam Fueled European Colonization in the Americas 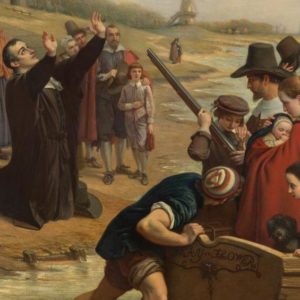 How the Specter of Islam Fueled European Colonization in the Americas

As every schoolchild learns, Columbus set sail with India on his mind’s horizon. Rarely, though, do schoolchildren learn...
© LitHub
Back to top