Here It Is! Alice B. Toklas’s Recipe for Hash Brownies

Yesterday, I published a list of unusual literary cookbooks—and in doing so was reminded of perhaps the most notorious recipe ever included in such a volume: “Haschich Fudge,” printed in The Alice B. Toklas Cook Book in 1954. Since this is Thanksgiving and you may be called upon to make dessert and/or come up with creative ways to tolerate your relatives, I thought I would share it again here.

Of course this wasn’t Toklas’s recipe at all—it was sent to her by a friend, the artist Brion Gysin, who lived in Morocco. (You may not recognize the name, but he’s a literary celebrity in his own right, or should be: Gysin invented the cut-up method, which William S. Burroughs made famous.) Toklas signed a contract with Harper’s for the cookbook in 1952, but as the deadline approached, she decided she didn’t have enough recipes of her own and started asking her friends for help. This was Gysin’s contribution. (I have corrected his misspelling of “cannabis” in multiple places.)

Haschich Fudge (which anyone could whip up on a rainy day)

This is the food of Paradise—of Baudelaire’s Artificial Paradises: it might provide an entertaining refreshment for a Ladies’ Bridge Club or a chapter meeting of the DAR. In Morocco it is thought to be good for warding off the common cold in damp winter weather and is, indeed, more effective if taken with large quantities of hot mint tea. Euphoria and brilliant storms of laughter; ecstatic reveries and extension of one’s personality on several simultaneous planes are to be complacently expected. Almost anything Saint Theresa did, you can do better if you can bear to be ravished by “un évanouissement reveillé.”

Take 1 teaspoon black peppercorns, 1 whole nutmeg, 4 average sticks of cinnamon, 1 teaspoon coriander. These should all be pulverised in a mortar. About a handful each of stoned dates, dried figs, shelled almonds and peanuts: chop these and mix them together. A bunch of cannabis sativa can be pulverised. This along with the spices should be dusted over the mixed fruit and nuts, kneaded together. About a cup of sugar dissolved in a big pat of butter. Rolled into a cake and cut into pieces or made into balls about the size of a walnut, it should be eaten with care. Two pieces are quite sufficient.

Obtaining the cannabis may present certain difficulties, but the variety known as cannabis sativa grows as a common weed, often unrecognized, everywhere in Europe, Asia and parts of Africa; besides being cultivated as a crop for the manufacture of rope. In the Americas, while often discouraged, its cousin, called cannabis indica, has been observed even in city window boxes. It should be picked and dried as soon as it has gone to seed and while the plant is still green.

For those who’d rather hear it directly from the source, or who simply have their hands full, below you’ll find Toklas—dignified as can be—reading the recipe aloud on Pacifica Radio in 1963. She reads the above and then tells the interviewer:

The recipe was innocently included without my realizing that the hashish was the accented part of the recipe, and then I was shocked to find that America wouldn’t accept it, because it was too dangerous. Well this was an offense to the American eye and American thought because they were afraid they were up against the law. And so my publisher wired to Washington and asked the administration if it were possible to use such a recipe. Then it appeared, there’d been an outcry. The magazines took it up. And he got as an answer from Washington: “you can do anything you please except eat it. That is forbidden by law. You may grow it, you may manufacture it, but you may not sell it, you may not eat it.” Brion Gysin himself wired me and said, “what are we doing about this?” And I said, “I’m doing nothing, what can you do?” I was shocked to find that it was hashish. I thought it was just a joke of his. And he said “well something should be done,” and so he wired to the editor, who paid no attention to him. He said it was too late. Later, in conversation. So that was that. It never went into the American edition. The English are braver. We’re not courageous about that sort of thing.

It did, in the end, get included in an American edition in the 1960s, and even inspired a plot point in the 1968 film I Love You Alice B. Toklas, in which the life of attorney Harold Fine (Peter Sellers) is forever changed when a beautiful hippie girl makes him a batch of fudge pot brownies. Which is as good an excuse as any to make these this weekend, or on the next rainy day.

Weird Hangover Cures Through the Ages 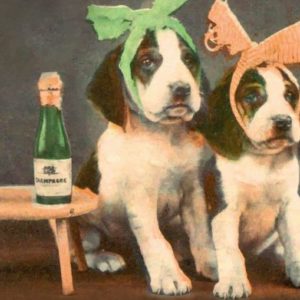 Weird Hangover Cures Through the Ages

Throughout history, people have done all sorts of weird things involving animals in the hopes of curing a hangover. It is said that...
© LitHub
Back to top