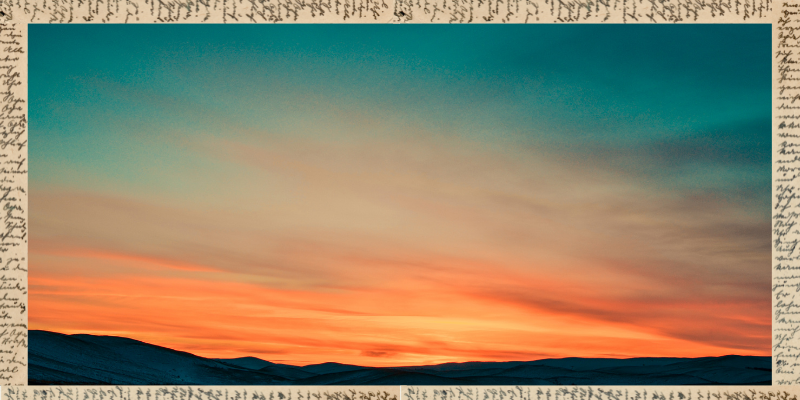 Hello darkness, my old friend: 8 of the best sunsets in literature.

Well, it’s happening. We wound our clocks back, and the glorious light of day is going to be leaving us at, like, 4PM now. Say goodbye to sunshine. By the time you shut your laptop at the end of this working day, it will be dark. I’m doing great, in case you were wondering. But I thought it might be soothing to lean into the bleak reality and take a look at some of the best descriptions of sunsets in literature, the ones that manage to make the slow dread beautiful.

From Diane Cook’s The New Wilderness:

From a far low ridge, some foothills of foothills to come, she heard a joyless howl; some watching wolf had seen the carrion birds, was signaling prey. She had to leave. The sun was going. And now the wolves knew. She’d tracked her shadow becoming long and thin, a sight that always made her sad, as though she were seeing her own death by starvation.

From Emily Fridlund’s History of Wolves:

No one had turned on the lights, which was nothing special. My father, no doubt, was drinking beers with Quiet in the shed. Most nights my mother stitched her quilts at the table by the stove until it was so dark she nearly stabbed herself with the needle. And then, as if surprised, as if shocked by another day ending—yet another day handed over—she usually lit a lantern or started the generator out back, which turned on the lamp in the kitchen. She did this as if affronted. “Why didn’t you tell me it was so dark?” she’d ask if I were there, if I were huddled over some last bit of homework. I don’t know why it pleased me so much to let night sneak up like that. I don’t know what it had to do with me at all—but it was true, I almost always did know it was dark, and so it felt like luring her into the same trap over and over.

Got you, I thought.

From George Saunders’ “Escape from Spiderhead” in Tenth of December:

Night was falling. Birds were singing. Birds were, it occurred to me to say, enacting a frantic celebration of day’s end. They were manifesting as the earth’s bright-colored nerve endings, the sun’s descent urging them into activity, filling them individually with life nectar, the life nectar then being passed into the world, out of each beak, in the form of that bird’s distinctive song, which was, in turn, an accident of beak shape, throat shape, breast configuration, brain chemistry: some birds blessed in voice, others cursed; some squeaking, others rapturous.

The sky, at sunset, looked like a carnivorous flower.

From Kelly Link’s “Water Off a Black Dog’s Back” in Stranger Things Happen:

The farmhouse where Rachel lived had a wrap-around porch like an apron. It had been built on a hill, and it looked down a long green slope of Christmas trees towards the town and Jellicoh College. It looked old-fashioned and a little forlorn. On one side of the house was a small barn, and behind the barn was an oval pond, dark and fringed with pine trees. It winked in the twilight like a glossy lidless eye. The sun was rolling down the grassy rim of the hill towards the pond, and the exaggerated shadows of Christmas trees, long and pointed as witches’ hats, stitched black triangles across the purple-grey lawn. House, barn, and hill were luminous in the fleet purple light.

From Sue Monk Kidd’s The Secret Life of Bees:

Sunset is the saddest light there is. We rode a long time in the glow of it, everything silent except for the crickets and the frogs who were revving up for twilight. I stared through the windshield as the burned lights took over the sky.

The sun followed us for a while, and just as it sank beneath the mossy riverbank, Árpád slunk out of the compartment. Sunset sent up ribbons of gold that looped themselves around our clasped hands and, before too long, our entwined bodies.

The thin white hands shook a little and Colin’s flush grew deeper as he set the rose in the mould and held it while old Ben made firm the earth. It was filled in and pressed down and made steady. Mary was leaning forward on her hands and knees. Soot had flown down and marched forward to see what was being done. Nut and Shell chattered about it from a cherry-tree.

“It’s planted!” said Colin at last. “And the sun is only slipping over the edge. Help me up, Dickon. I want to be standing when it goes. That’s part of the Magic.”

And Dickon helped him, and the Magic—or whatever it was—so gave him strength that when the sun did slip over the edge and end the strange lovely afternoon for them there he actually stood on his two feet—laughing.