In Conversation with Cody Cassidy

Cody Cassidy is the author of Who Ate the First Oyster? The Extraordinary People Behind the Greatest Firsts in History. Literary Hub spoke to Cassidy about some of his own “firsts.”

Literary Hub: What was the moment you first realized you wanted to write a book about “firsts”?

Cody Cassidy: My ideas nearly always come while I’m reading. In this case, it was Siddhartha Mukherjee’s The Emperor of all Maladies. Mukherjee begins his book with a fascinating anecdote about the first documented case of cancer, which comes from an ancient Egyptian tablet. The hieroglyph describes the patient and their disease, which is most likely breast cancer judging by the description. I found something deeply interesting not only in that this was the first known person to suffer from this disease, but also something poignant in such a specific diagnosis and detail of a person who lived so long ago.

I had already been thinking about “firsts” before I read Emperor, but the anecdote about the ancient sufferer unlocked the idea when I realized I was far more interested in the firsts and discoveries of prehistoric people. Not only did these ancient discoveries involve the kind of investigative work that I was more interested in, I thought providing specific details about ancient people would humanize them in a way I hadn’t often seen before.

LH: When was the first time you remember laughing during your research for this project?

CC: It must have been shortly after I had the idea. I knew from the beginning that I wanted to profile whoever ate the first oyster, and when I found out a few professors had given this seemingly-silly question serious thought and had come up with a brilliant answer involving the link between the moon’s phases and the tides—I must have laughed with delight. It’s such a brilliant yet simple observation, and if answers like that were out there I knew this could be done.

LH: Who was your first personal literary pioneer, the person who made you realize you could do that?

CC: I have had many stages to my pursuit of a writing career and thus I have had many different writers that I have used as a North Star. But because I largely learned to read both on the sports page of my local paper and copies of my dad’s Sports Illustrated–my first goal was to be a sports writer and thus Rick Reilly’s column in the back of SI became one a must-read for me.

LH: What’s something you might likely be the first to do?

CC: Unfortunately, I think I’m far too risk averse to truly be a pioneering “first.” However, I did recently learn that a well shuffled deck of cards has never appeared in the same order ever before—so the last time I played cards (or the last time you played cards, for that matter) I was the first to play with that specific arrangement. Not much to be proud of, but it’s the kind of silly first that I think I’ll have to be satisfied with.

LH: What’s something you know you could never be the first to do?

CC: I could never be the first to eat something weird! I think that’s partly why I titled my book after the first oyster eater. It blows my mind that someone did that. If I’m trying something strange for the first time I need to watch someone else go first and survive the experience. I’m like the spy in one of those spy movies. I need proof whatever it is isn’t poisonous before I’ll try myself.

LH: What’s the first book/article/etc. you read to prepare for the book?

CC: Catching Fire by Richard Wrangham was one of the first books I read as research and also one of the best. In his book, Wrangham seeks to pinpoint when humans first controlled fire–but the direct evidence for fire is scant. And so he looks for indirect evidence, including the changes eating cooked food would be expected to make on our digestive system. By doing so, he makes a very compelling case.

In a way, his method became the model for how I went about answering many of my questions. Most of them also surfer from a lack of direct evidence, yet that doesn’t mean there aren’t other clues that we can look for. The trick is finding the changes that invention would have wrought that survive today—be it in language, genetics, or bones.

Fabric, for example, has long since degraded and so it would seem impossible to discover clothing’s origins. But by looking at the genetics of lice, geneticists have found when they evolved to live on clothes and in doing so have provided a powerful piece of evidence for clothing’s origins. It’s these kinds of tangential effects and pieces of indirect evidence that provide the backbone for this book.

LH: What’s the first thing you do before writing on any given day?

CC: I walk my dog, though not by choice or because it’s apart of some process. It’s entirely at his insistence. Coffee too, of course. Early and often. I didn’t start drinking coffee until after college and I deeply regret that. The only routine I truly have is that I very much prefer to write in the mornings and I guard those zealously.

LH: What’s the first idea that didn’t end up making it into the book?

CC: So many ideas didn’t make the book that it’s hard to say what was the first. As I mentioned I really wanted to write about patient zero for the common cold, but it turned out there wasn’t really a first and it was a far more complex question than I had anticipated. That was a huge let down. I really wanted to pin the blame for my sniffles on someone.

I also wanted to write about the first person to shave, the last Neanderthal, and the inventor of math, but for various reasons I had to set them all aside even though in a few cases I found great answers. But I avoided questions that didn’t have a definitive first person (or last, in the case of the Neanderthal), or that had very little academic support, or simply weren’t as interesting as the others–and those questions suffered from a mix of all three.

LH: What was the first thing you did after you submitted your final draft?

CC: I took my dog on a long walk on my local beach, which I’m now realizing is a bit of clichéd answer. But it’s true and it was a nice walk. This book required a tremendous amount of time and research and for a long time I was certain I wouldn’t finish. So when I did there was a sense of relief that made a leisurely walk particularly enjoyable.

LH: Have any first inklings of your next project?

CC: Yes, I’m delving back into history by writing a guide to a few historical eras for modern visitors. I feel there is an urgent need. For example, I’ve come to understand that if a modern person traveled back to the dinosaur era they’d probably starve or be eaten—but it doesn’t have to be that way! The information on how to survive the Jurassic is out there. It’s just that no one has collated it into a handy, easy-to-read manual. And I’d like to fix that. 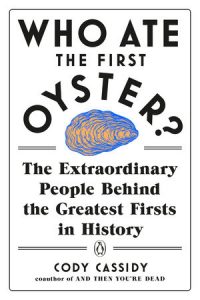 Cody Cassidy’s book Who Ate the First Oyster? The Extraordinary People Behind the Greatest Firsts in History by is available now.

Samantha Harvey on Grappling with Insomnia and Reckoning With the Past 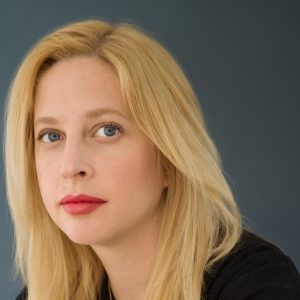 Mary South is this week's guest. Her debut story collection, You Will Never Be Forgotten, is available from FSG Originals. From...
© LitHub
Back to top
Loading Comments...