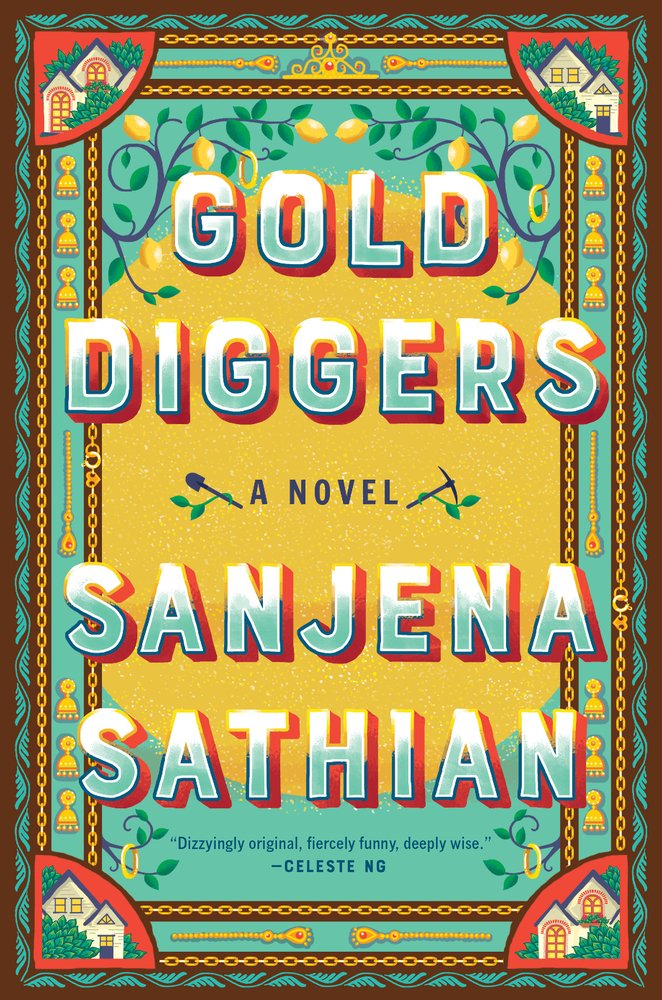 The following is excerpted from Sanjena Sathian's debut novel, Gold Diggers, about the promise and danger of secondhand ambition. Sathian is a 2019 graduate of the Iowa Writers' Workshop. She has worked as a reporter in Mumbai and San Francisco, with nonfiction bylines for The New Yorker, The New York Times, Food & Wine, The Boston Globe, The San Francisco Chronicle, and more. And her award-winning short fiction has been published in Boulevard, Joyland, Salt Hill, and The Master's Review.

At the end of May, my whole family donned our Indian clothes and headed to a big party celebrating the Bhatt twins’ graduation. I scratched at the blue kurta my mother had made me wear. Talk on the way there focused on the honorees: Jay was Ivy League–bound in the fall, while Meena would attend a state school, and not one of the “better” ones, in my parents’ eyes. Meena’s fate offended my mother.

“She fooled around all high school, didn’t she?” my mother said to Prachi. This was the latest tactic in the wake of Prachi’s Spring Fling moral miscarriage. My mother would ask her to recite the fates of those who “fooled around”—which might, in her view, include anything from neglecting to take AP Biology to shooting up hard drugs. She educated us about the wider world by assembling a kind of shoe-box diorama of other people’s lives—a cardboard drama. She arranged the characters, moved them about, and showed you how they were doing it wrong, turning the diorama into the set of a morality play.

Upon arriving at the Bhatts’, I prepared to abscond to the basement. Basements were the safest places to survive an Indian party in the suburbs. In a basement, the itchy clothes could be loosened, the girls’ dupattas dropped on the floor and trampled upon, the guys’ kurtas removed to reveal that all along someone had been smart enough to wear a T-shirt beneath the fabric, and jeans rather than churidars below. In basements you never encountered garish images of multiarmed gods, or family portraits shot in the mall photography studio—sisters draped in lehengas and brothers’ hair stiff with gel. In basements you found foosball and Ping-Pong tables, big-screen televisions, and, depending on the benevolence of the parents, video game consoles. In basements, I learned the secrets of sex, according to information curated from older brothers who were certainly still virgins. In basements, a semblance of our due—American teenagedom.

The Narayan family basement was, by the way, unfinished.

“Lavish-shmavish,” my mother whispered as I made for the underground. This was her general opinion on the Bhatts, and on any carpeting or televisions below the earth.

At the end of May, my whole family donned our Indian clothes and headed to a big party celebrating the Bhatt twins’ graduation.

New graduates kicked back in oversize leather recliners. Meena Bhatt sat on the lap of George Warner-Wilson, had spent high school as one of the only white people among Asians. He was going to Georgia Tech in the fall, might continue dwelling at this demographic crossroads.

“Neilo, Neilium, Neilius,” through his sinuses, saluting me. I waved. “Your crew’s exercise room.” He pointed.

As I opened the heard Meena sigh, with a voice less damned (per my mother’s diorama) than insouciant: “Can someone bring me something that’s not frickin’ Indian food?”

The gym looked unused. Half the walls were mirrors. Folded up against un-mirrored wall was a treadmill draped in plastic. Mounted in one corner, a television, and beneath it, a video game console. A report of gunfire went off on-screen.

Anita sat cross-legged on the floor, examining a glossy magazine. She hovered a pencil above the pages, marking off answers in some quiz.

“Oh, good, Neil! Everyone was wondering where you were,” she said in that brisk voice of hers. Her eyes alighted on me for only an instant. Anita was a bit like a windup toy, capable of spinning fast for a period—laughing easily, tending to social niceties—only to run out later, in private. When it was just the two of us, she’d always been slower, laxer.

Amnesia, I thought viciously. Ignoring me all spring, and now here she was, bending over the magazine so that I spied the top of her newly grown chest.

Now Anita was turning to Aleem, saying, “You got ‘mostly B’s,’ so your future wife is Lauren Bennett . . .” (giggles from Manu at the improbability). “But really, don’t take it too seriously—these are designed for girls.”

Anita loved these games and quizzes— anything that offered a prognostication, anything to help articulate her future, no matter how trite. I understood why. A positive result—you’d marry Melanie Cho!—could turn you briefly dreamy with a picture of a life to come. The worst result you could land in one of these divinations? Shruti Patel.

The Narayan family basement was, by the way, unfinished.

“That’s what I said,” Isha Arora put in. “No celebrities.”

“Whatever,” Anita said. “It’s not like we know the people we’re going to marry now. Like, what about the whole rest of life? I could meet Jake Gyllenhaal sometime. Or whoever.”

“My parents met when they were sixteen,” Juhi said.

“Yeah, and got an arranged marriage.” Anita gave a little shiver of revulsion, one I’d seen before when she spoke about the parents of Hammond Creek, whose lives she roundly disdained. “Anyway. It’s not like I’m going to marry an Indian guy.”

Everything hung dead in the air for a moment, and then Juhi and Isha started to guffaw, looking around at me and Manu and Kartik and Aleem. The video game was forgotten; a soldier spun on-screen, displaying his machine gun impotently.

“I mean, no offense,” Anita said to the air.

“Yeah, well, it’s not like I’m going to marry—” Manu was saying, when in came Shruti Patel. The room stiffened at the sight of her, standing there in her wiry, frizzy manner. Her presence fractured a party. You were too aware of the sounds of her mouth-breathing, the way her face contorted when she tried to participate. It required emotional labor to include her, and it was simpler to dispense with all the kindergarten rules of engagement and ignore her. That day, Shruti seemed to know more than ever these facts about herself. Those bushy eyebrows, which so often met in the middle of her forehead as she considered a problem in class, raised almost to her hairline and then flattened. She wanted us to believe she had never given us any thought at all, though behind her Mrs. Bhatt was saying, “See, Shruti, I told you all your classmates were hiding out down here.”

Which was when Isha, eyes on Anita, said, “Guess who you’re going to marry, Shroots?” She and Juhi snickered. Manu’s eyes met mine as we both considered intervening. But you had to save your ammo for yourself; the derision could land on you anytime, and even among friends, it had the effect of total destruction. It took so much to gather yourself up into some semblance of a person every morning. A rash of mocking could undo all that in an instant. I sat with my back against the wall and laughed as quietly as possible.

Shruti, always quick in her own defense, quick enough that you could believe she didn’t mind the banter, retorted, “I’m not planning on getting married, Isha. I happened to punch the last guy who asked me, you know.” And if we hadn’t all heard the strain in her rebuttal, seen the whitening of her lips, it might have been funny.

Anita loved these games and quizzes— anything that offered a prognostication, anything to help articulate her future, no matter how trite.

Anita stood, and though she had frequently used Shruti as a punch line, this time she spared a withering glance for Juhi and Isha. She could afford to, from her new position above the rest of us. “Come get some food with me, Shroots,” she said.

I remembered the day Shruti arrived in seventh grade, fresh off the boat. Anita made me cross the cafeteria to sit down with the new girl, who rolled her r’s too hard. The three of us ate our whitebread sandwiches. Kraft singles in mine, peanut butter and banana in Anita’s. Red and green chutney with potatoes in Shruti’s, emitting a distinct spicy smell. “It’s easy make this yourself,” Anita advised Shruti, opening her triangles to reveal the smush of browning fruit and crunchy Skippy. “But I like mine,” Shruti had said.

We had since distanced ourselves from her. But you could never properly avoid, shun, renounce, extract, or untangle yourself from any other desi in Hammond Creek. You were all a part of the same mass. Some you trampled on one another. Other days, you hid in the same basement, seeking shelter from the same parental storms.

“Yeah,” Isha called as Anita and Shruti made their egress. “Anita, enjoy the food—I mean, you must be so at home, eating this stuff.”

Aleem turned to me. “You hear my middle sister didn’t get into any schools?”

“What’s she going to do?” I had a vision of Shaira packing up the Khans’ station wagon and zooming west, a female Muslim Sal Paradise (I’d recently read—and treasured—On the Road). What if she just went . . . anywhere? Sought out the mad people? “She could do anything.”

“Why are you all so gay for college?” Kartik fiddled with the video game controller. School didn’t come easily to him. So, soon enough, we let him redirect the conversation to one of those teenage-boy brain trusts: “You know the secret to getting any school?”

We asked him to enlighten us.

“They’re afraid of dicks. Every them. That’s what my brother says.”

“What the hell does that I said.

“I mean biological fact that they have the thickest—what’s it called—the thing that breaks when chicks get reamed for the first time.”

Anita stood, and though she had frequently used Shruti as a punch line, this time she spared a withering glance for Juhi and Isha.

“Right, they’ve got the thickest in the world, so blood everywhere.” He emitted an explosive, diarrheic noise, making fireworks with his hands, puffing cheeks out, spewing air.

“Who’s that girl you debate with?” Aleem asked me. “Wendi Zhao? She’s kind of hot.”

Kartik leaned against the mirror. “Wendi Plow,” he said. Then he added, in case we didn’t get it: “I’d plow Wendi Zhao, all I’m saying.”

“Dude,” Manu said, turning to me, and I cringed, because he was about to do that thing—the male version of that thing Shruti did—where he deepened his voice and tried to access the patois of our generation. “Dude, I bet Anita totally likes you, though.”

“What did I just say?” Kartik moaned.

How Tony Soprano Inaugurated a New (and Raw) Version of Masculinity

The Joy and Privilege of Growing Up in an Indie Bookstore 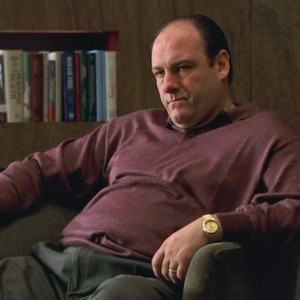 How Tony Soprano Inaugurated a New (and Raw) Version of Masculinity The fact that Tony Soprano, in 1999, inaugurated a new version of masculinity—one that boldly refuses to soften and make...
© LitHub
Back to top