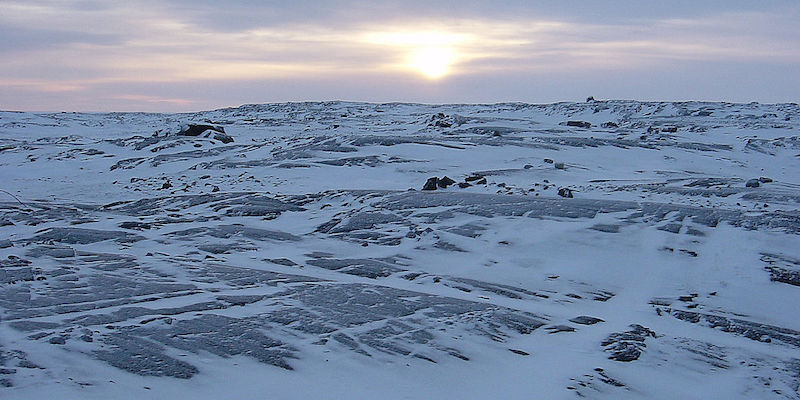 Going Deep into the Canadian Subarctic for Research

Sometimes, You Just Have to Leave Your Apartment

I stepped off the propeller plane in Iqaluit and into a blinding snowstorm. My weather app said 16 below. Not bad. Except that the wind-chill made it feel like minus 40—so cold my teeth ached the moment I opened my mouth. Yet I couldn’t stop grinning. This was exactly the kind of experience I wanted.

I had come to Iqaluit, in subarctic Canada, to research the distant past. A thousand years ago, to be exact—the setting for The Wolf in the Whale, my new novel about the collision of Inuit and Vikings in medieval North America. Iqaluit itself is a modern city with a population of 7,000. As the capital of Nunavut, Canada’s newest province, it serves as the political and economic hub for a vast region of the Arctic. It grows bigger and busier every year, attracting immigrants from all over the world and boasting a surprisingly excellent barbecue joint.

But when you step away from the streetlamps, the Northern Lights still dance across the sky in sparks of orange and ribbons of green, and less than a mile from the brand-new airport, the tundra is scarcely different than it would have been a millennium ago. The sea ice may form at a slightly different time of year, but it still buckles and breaks as it did when the ancient ancestors of today’s Inuit hunted whale from skin-covered umiaqs—and Inuit elders still hold the knowledge of a nomadic lifestyle passed down by their forebears.

For several years, I had explored the vast expanses of the ancient Arctic from the warm confines of my Manhattan apartment. As all writers know, there is power in books. They are a form of time travel in themselves. Barry Lopez’s Arctic Dreams and others had given me a vivid sense of the landscape and environment. Collections of Inuit legends, ethnographic studies by 19th- and early-20th-century explorers, films such as Atanarjuat: The Fast Runner, and phone conversations with Inuit leaders had provided a glimpse into traditional Inuit culture. Nonetheless, someone else’s words cannot compare to the wealth of detail that emerges from firsthand experience.

I had learned the importance of travel when writing the Olympus Bound trilogy. Although most of the series is set in modern Manhattan, its protagonists are ancient Greek gods. My research took me from the caves of Crete to the summit of Mount Olympus. There, I learned more about my heroine, Artemis, than I ever could have from my teetering piles of books and dizzying compilations of websites.

I found it especially important to write with both respect and caution about a culture not my own.

Standing beneath the last soaring columns of Artemis’s great temple at Sardis, in Turkey, with the remains of her even more ancient stone altar nearby, one can nearly feel the presence of the goddess—or at least of those who once believed in her. But there is a more practical reason for such travels as well. The color of the sun-struck stucco in Delos, the careful porphyry pattern on the Pantheon’s floor, the stork sitting atop the last remaining column of Artemis’s temple in Ephesus—all of these details and more made it into the novels, each one adding a richness and depth that help bring a distant place and time vividly to life.

For The Wolf in the Whale, such details were even more important. Many Americans are at least familiar with Greek and Roman myth; many have even visited Athens or Rome themselves. But few of us have any experience with the Far North or with ancient Inuit history. As a non-Inuit writer, I found it especially important to write with both respect and caution about a culture not my own. Thus, I needed to not only experience the landscape but also speak with the people who still inhabit it.

Unlike my travels to Iceland and Norway to research Viking culture, the journey to Nunavut was not an easy one to organize. As an outsider—even one who had been emailing with as many cultural institutions and community leaders as I could find—I simply didn’t have the expertise needed to assure an effective research trip. Luckily, I found Alex Flaherty, owner of Polar Outfitting. I hired Alex, an Inuit hunter himself, as my guide and facilitator: he not only answered my questions on everything from seal breathing holes to harpoon heads, but also introduced me to other members of his community to offer firsthand experiences of traditional Inuit life.

Thus, before I even stepped off the plane, I knew I would have the chance to build an iglu, ride on a dogsled, cross the sea ice, and more. What I couldn’t predict was the awe I would feel in doing so. Nancy and Loasie Anilniliak, whom Alex had hired to take me into Auyuittuk National Park, showed up at the lodge in Pangnirtung the night before our planned excursion. Nancy spoke English; her husband, despite the blue eyes inherited from some distant European whaling ancestor, spoke only Inuktitut.

“It’s cold out there,” Nancy informed me. This much, at least, I already knew, having tromped around town earlier that day with numb cheeks and aching teeth and an ever-present fear of hypothermia. Upon her request, I showed her the heavy boots and thick long underwear I’d so carefully purchased for the trip. She picked up one item after the other and showed it to Loasie, both of them stone-faced.

I was out of winter gear to offer. We sat in silence—mine embarrassed, theirs patient—for so long that I began to fear they would simply refuse to work with me.

“We will give you something to wear,” Nancy finally said.

The next morning, my fears came true. The entire excursion was canceled. “Too much wind,” she said over the phone, as the windows in the lodge rattled behind me. “It will kick up so much snow you won’t see anything anyway.”

I’d come all this way for nothing. But then, Nancy offered something even better than the promised excursion: “We will make you dinner at our house instead.”

“It’s cold out there,” Nancy informed me.

That night, I joined the extended Anilniliak family around a dining table crammed with food. Whatever awkwardness we had felt the night before soon dissolved into smiles and laughter amid the seaweed cooked in seal broth (salty and rich), caribou stew (hearty and savory), and cubes of raw narwhal skin (mild and chewy). Afterward, Loasie’s sister brought over the traditional stone lamp, or qulliq, filled it with oil, and shaped a wick from the traditional materials of moss and arctic cotton—then set it aflame with a Bic lighter. She used a blackened wooden poker to deftly control the flame, then passed the tool to me. I was sitting in a perfectly modern kitchen—yet watching the small mountain peaks of flame climbing along the lamp’s edge, the fire’s warmth reddening my cheeks, I felt transported back in time. In all the books I’d read, in all the videos I’d watched, I’d never once thought to wonder about the smell of a qulliq’s flame. Fragrant, nutty, soothing. The perfect antidote to weather so cold it sears the inside of your nostrils.

Later, when the rest of the family had left, Nancy and Loasie brought out the fur parkas they wore on long hunting trips. Most of the fur came from seals or wolves that Loasie had caught—and some from a stray dog prowling the town dump. Loasie’s sister and Nancy had sewn them, along with two pairs of carefully crimped sealskin boots. She helped me pull on the clothes. I wondered why they were so lightweight, my only other experience with fur having been my mother’s old mink coat, which always felt like a sopping wet towel across my back. “It’s not tanned,” Nancy explained. I’d known Inuit traditionally scraped and chewed hides rather than dousing them with chemicals—I’d just never known the process would make an entire fur outfit feel lighter than my L.L. Bean parka. With the hood pulled up, I retreated into a perfect cave of warmth, one that I never wanted to leave.

There were more surprises to come. I knew Inuit sometimes ate their meat uncooked, but I didn’t appreciate the subtle, melting flavor of raw caribou until the Pirurvik Centre staff invited me to lunch. And as many times as I’d seen photos of the Northern Lights, I didn’t anticipate the stripe of cloud-mottled green arching across the heavens like Jormungand, the Norse Midgard Serpent, circling the world. Nor had I ever imagined the difficulty of pushing a blade through packed snow to build an iglu—or the sublime tranquility of lying beneath the clean white dome when it was done, carefully noting how the sun limned each snow block in blue.

Jordanna Max Brodsky hails from Virginia, where she made it through a science and technology high school by pretending it was a theater conservatory. She holds a degree in history and literature from Harvard University. She lives with her husband in Manhattan, where she is working on her next novel. 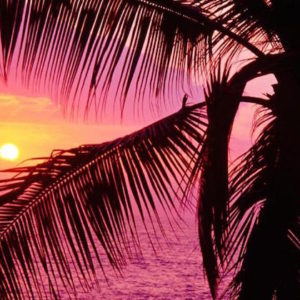 I have come very late to the work of Gabriel García Márquez. I cannot quite explain why it has taken me so long to read...
© LitHub
Back to top