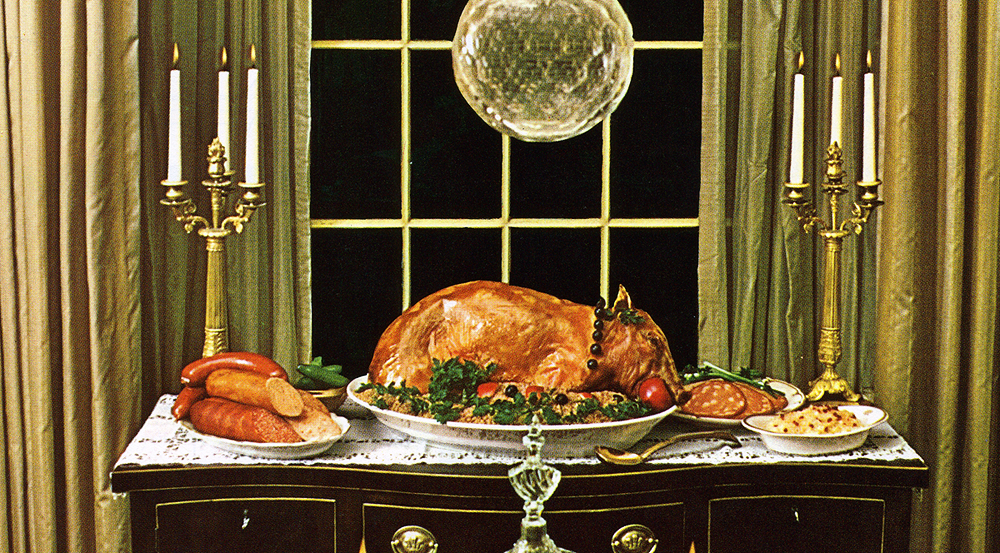 The Literary Arts Applied to Overeating

Thanksgiving is the quintessential American holiday where eating to excess in competitive, brother-against-brother oneupsmanship is celebrated. Open the top button on your trousers and, if you can stomach it, digest some of these passages on greedy consumption across the literary spectrum.

With a clattering of chairs, upended shell cases, benches, and ottomans, Pirate’s mob gather at the shores of the great refectory table, a southern island well across a tropic or two from Chill Corydon Throsp’s mediaeval fantasies, crowded now over the dark grain of its walnut uplands with banana omelets, banana sandwiches, banana casseroles, mashed bananas molded in the shape of a British lion rampant, blended with eggs into batter for French toast, squeezed out of a pastry nozzles across the quivering creamy reaches of a banana blancmange to spell out the words C’est magnifique, mais ce n’est pas la guerre… tall cruets of pale banana syrup to pour oozing over banana waffles, a giant glazed crock where diced bananas have been fermenting since the summer with wild honey and muscat raisins, up out of which, this winter morning, one now dips foam mugsfull of banana mead… banana croissants and banana kreplach, and banana oatmeal and banana jam and banana bread, and bananas flamed in ancient brandy Pirate brought back last year from a cellar in the Pyrenees also containing a clandestine radio transmitter…

The boy picked up the knife and was about to cut into the cake when he stopped. He stared at the cake. Then he looked up at the Trunchbull, then at the tall stringy cook with her lemon-juice mouth. All the children in the hall were watching tensely, waiting for something to happen. They felt certain it must. The Trunchbull was not a person who would give someone a whole chocolate cake to eat just out of kindness. Many were guessing that it had been filled with pepper or castor-oil or some other foul-tasting substance that would make the boy violently sick. It might even be arsenic and he would be dead in ten seconds flat. Or perhaps it was a booby-trapped cake and the whole  thing would blow up the moment it was cut, taking Bruce Bogtrotter with it. No one in the school put it past the Trunchbull to do any of these things.

“Taste it, you little brat,” the Trunchbull said. “You’re insulting the cook.”

Very gingerly the boy began to cut a thin slice of the vast cake. Then he levered the slice out. Then he put down the knife and took the sticky thing in his fingers and started very slowly to eat it.

“Very good,” the boy said, chewing and swallowing. He finished the slice.

“Have another,” the Trunchbull said.

“I said have another,” the Trunchbull said, and now there was an altogether sharper edge to her voice. “Eat another slice! Do as you are told!”

“I don’t want another slice,” the boy said.

Suddenly the Trunchbull exploded. “Eat!” she shouted, banging her thigh with the riding-crop. “If I tell you to eat, you will eat! You wanted cake! You stole cake! And now you’ve got cake! What’s more, you’re going to eat it! You do not leave this platform and nobody leaves this hall until you have eaten the entire cake that is sitting there in front of you! Do I make myself clear, Bogtrotter? Do you get my meaning?”

The boy looked at the Trunchbull. Then he looked down at the enormous cake.

Very slowly the boy cut himself another slice and began to eat it.

The travelers stopped for dinner at a restaurant in Great Bend. Perry, down to his last fifteen dollars, was ready to settle for root beer and a sandwich, but Dick said no, they needed a solid ‘tuck-in,’ and never mind the cost, the tab was his. They ordered two steaks medium rare, baked potatoes, French fries, fried onions, succotash, side dishes of macaroni and hominy, salad with Thousand Island dressing, cinnamon rolls, apple pie and ice cream, and coffee. To top it off, they visited a drugstore and selected cigars; in the same drugstore, they also bought two thick rolls of adhesive tape.

“No, joking apart, whatever you choose is sure to be good. I’ve been skating, and I’m hungry. And don’t imagine,” he added, detecting a look of dissatisfaction on Oblonsky’s face, “that I shan’t appreciate your choice. I am fond of good things.”

“I should hope so! After all, it’s one of the pleasures of life,” said Stepan Arkadyevitch. “Well, then, my friend, you give us two—or better say three—dozen oysters, clear soup with vegetables.…”

“Printanière,“ prompted the Tatar. But Stepan Arkadyevitch apparently did not care to allow him the satisfaction of giving the French names of the dishes.

“With vegetables in it, you know. Then turbot with thick sauce, then… roast beef; and mind it’s good. Yes, and capons, perhaps, and then sweets.”

“The Legend of Sleepy Hollow” from The Sketch Book of Geoffrey Crayon, Gent., Washington Irving

The pedagogue’s mouth watered as he looked upon this sumptuous promise of luxurious winter fare. In his devouring mind’s eye he pictured to himself every roasting pig running about with a pudding in his belly and an apple in his mouth; the pigeons were snugly put to bed in a comfortable pie, and tucked in with a coverlet of crust; the geese were swimming in their own gravy; and the ducks pairing cozily in dishes, like snug married couples, with a decent competency of onion sauce. In the porkers we saw carved out the future sleek side of bacon, and juicy relishing ham; not a turkey but he behold daintily trussed up, with its gizzard under is wing, and peradventure, a necklace of savory sausages…

“Fat” from Will You Please Be Quiet, Please?, Raymond Carver

He has this way of speaking—strange, don’t you know. And he makes a little puffing sound every so often.

I think we will begin with a Caesar salad, he says. And then a bowl of soup with some extra bread and butter, if you please. The lamb chops, I believe, he says. And baked potato with sour cream. We’ll see about dessert later. Thank you very much, he says, and hands me the menu.

God, Rita, but those were fingers.

Perched on high stools by the bar, hats shoved back, at the tables calling for more bread no charge, swilling, wolfing gobfuls of sloppy food, their eyes bulging, wiping wetted moustaches. A pallid suetfaced young man polished his tumbler knife fork and spoon with his napkin. New set of microbes. A man with an infant’s saucestained napkin tucked round him shovelled gurgling soup down his gullet. A man spitting back on his plate: halfmasticated gristle: no teeth to chewchewchew it. Chump chop from the grill. Bolting to get it over. Sad booser’s eyes. Bitten off more than he can chew. Am I like that?… Smells of men. His gorge rose. Spaton sawdust, sweetish warmish cigarette smoke, reek of plug, spilt beer, men’s beery piss, the stale of ferment.

Couldn’t eat a morsel here. Fellow sharpening knife and fork, to eat all before him, old chap picking his tootles. Slight spasm, full, chewing the cud. Before and after. Grace after meals. Look on this picture then on that. Scoffing up stewgravy with sopping sippets of bread. Lick it off the plate, man!

Chip went back to wrestling with the haddock filet, through the center of which ran a blood-brown fault of gristle that he was determined to cut out. But the fish had a starchy grain and was hard to get a grip on. “Fuck you, little girl,” he said as he threw the knife into the sink.

The cupcakes were full of butter and frosted with a butter frosting. After he’d washed his hands and opened a bottle of Chardonnay he ate four of them and put the uncooked fish in the refrigerator. The skins of the overbaked squash were like inner-tube rubber. Cent Ans de Cinéma Erotique, an edifying video that had sat on a shelf for months without making a peep, suddenly demanded his immediate and full attention. He lowered the blinds and drank the wine, and brought himself off again and again, and ate two more cupcakes, detecting peppermint in them, a faint buttery peppermint, before he slept.

The Wind in the Willows, Kenneth Grahame

“What’s inside it?” asked the Mole, wriggling with curiosity.

“There’s cold chicken inside it,” replied the Rat briefly; “coldtonguecoldhamcoldbeefpickledgherkinssaladfrenchrollscresssandwichespottedmeatgingerbeerlemonadesodawater—”

“O stop, stop,” cried the Mole in ecstacies: “This is too much!”

Emma, on entering, felt herself wrapped round by the warm air, a blending of the perfume of flowers and of the fine linen, of the fumes of the viands, and the odour of the truffles. The silver dish covers reflected the lighted wax candles in the candelabra, the cut crystal covered with light steam reflected from one to the other pale rays; bouquets were placed in a row the whole length of the table; and in the large-bordered plates each napkin, arranged after the fashion of a bishop’s mitre, held between its two gaping folds a small oval shaped roll. The red claws of lobsters hung over the dishes; rich fruit in open baskets was piled up on moss; there were quails in their plumage; smoke was rising; and in silk stockings, knee-breeches, white cravat, and frilled shirt, the steward, grave as a judge, offering ready carved dishes between the shoulders of the guests, with a touch of the spoon gave you the piece chosen. On the large stove of porcelain inlaid with copper baguettes the statue of a woman, draped to the chin, gazed motionless on the room full of life.

Madame Bovary noticed that many ladies had not put their gloves in their glasses.

But at the upper end of the table, alone amongst all these women, bent over his full plate, and his napkin tied round his neck like a child, an old man sat eating, letting drops of gravy drip from his mouth. His eyes were bloodshot, and he wore a little queue tied with black ribbon. 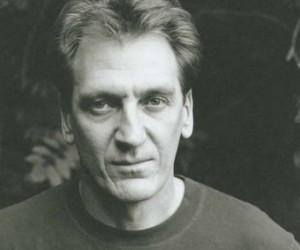 South African writer Ivan Vladislavić was in the US recently to launch the new edition of his novel The Folly published...
© LitHub
Back to top
Loading Comments...