On Living a Well-Managed Life

In the Sun Also Rises, Jake Barnes claimed that in his circle it was bad form for one writer to compliment another to his face. Maybe it was that or maybe he was simply shy or maybe—and why not—Harry Mathews simply did not like me at first sight or my first words of praise.

He seemed taken aback and said flatly: “Thank you.” I was sure my effusiveness had alienated him.

I met Harry in the summer of 1988 or 1989 at a garden party at the painter Larry Rivers’ house in Southampton. Larry was in full minimalist host mode and said, “Hey! Harry, this is Fred. He’s a writer.”

Although Harry was only six years older than I, he seemed of another time. And he was. He belonged to that fading world of Americans who prized European culture—French especially—and he had gone to live in Paris and had found a home there in a culture that historically favored the unusual, the radical in literature. He was the only American member of Oulipo, the distinguished anti-surrealist group comprised of, among others, Georges Perec, Italo Calvino, and Raymond Queneau, my editor at Gallimard for my first novel, The Adventures of Mao on the Long March. The Oulipians worked not with anarchic flow of the unconscious but with rigorous—sometimes mathematical—parameters for their prose and poetry. I felt a kinship with his wish to avoid the traditional, realist narrative of storytelling, and with his turning away from poetry as a manifestation of personality. He was mon semblable—mon frère! I wanted to tell him that.

The party drifted into a candle-lit night, and I brooded on the disaster of my meeting Harry. I watched as he drank and ate and had fun, seeming so different from the reserved man I had met earlier; once in a while he sent me a heartening, friendly salute.

I stayed at the party for a while, and having felt that I had made a fool of myself, I made the rounds to say goodbye. At that moment, Harry came over.

“Why are you leaving?” he asked. “The night’s just started.”

I made some fumbling excuse and he said, “I was hoping to talk to you. When Larry introduced us, I didn’t register your name. Because in his ineffable Bronx accent Larry made it sound like Tootine. Then I realized that you had lived in Paris and were a friend of Raymond Queneau. I always wondered if I would meet you.”

“And I always wondered if I would meet you,” I answered in stunning repartee.

Harry and I corresponded, but we rarely ever talked about literature, art, poetry, or cinema, both of us suffering from a cultural nausea, the surfeit of everyday writer’s shop talk.

I noticed, looking back over our correspondence of over two decades, how much of it had to do with our various ailments, disabilities, infirmities, and losses. Like two cranky old guys on a park bench.

I write: “One of my oldest friends died recently, this limiting my desire to be in Paris because the world there has shrunken down for me.”

He writes, “I [suffer] from a ruptured lombar [sic] disc that have made recent months somewhat nightmarish; but possible progress is in train.”

I write, “How is your knee? I ‘m facing the prospect of knee replacement, and I remember you had trouble with yours.”

We finally met again, and for the last time, in 2012 when Harry was coming to New York on his way to a Groton School reunion. We lunched at the Bryant Park Grill, which was conveniently close to his hotel. It was a sunny Mother’s Day, and all the outdoor tables were packed with families.

I was concerned that Harry would be uncomfortable waiting, so I went to the hostess and said, “I am with a very important writer who has come from Europe. I would like him to have a good impression of this grill.” Then, I whispered, “I’m not sure his back is holding up well.” Harry made a stage grimace and leaned on his cane.

Within minutes, we were given a table. He worried over the wine list and I remembered being told that he was a connoisseur. He finally chose something that he said was “not too disagreeable.” I had never been with Harry in the daytime, and I saw then that he had the face of a boxer not bruised by a glove but by the sun.

“Fred, do you ever think of coming back to live in Paris?” he asked.

“It’s too late, Harry. Do you think of coming back to New York?”

“Where do you spend your summers? South of France?”

“I wouldn’t be caught dead there,” he said.

“We have a little house in the Pyrenees, where it is pleasantly cool.”

“You have a good life, Harry.”

He nodded. “I have managed it very well.”

Frederic Tuten is an American novelist and short story writer who has published five novels—including Tintin in the New York and The Adventures of Mao on the Long March. and a story collection, Self Portraits: Fictions.

The Men in My Life 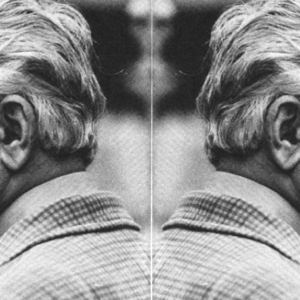 James Baldwin, American radical: in conversation with the director of I Am Not Your Negro, Raoul Peck. | Literary...
© LitHub
Back to top