Four Personality Types That Will Derail Your Literary Event

Or, Some Highly Subjective Advice on What Makes for a Good Panel

Almost every literary event we attend has a moderator. Sometimes the event organizer, sometimes a bookseller shoved to the fore clutching a microphone, a moderator is either charged with keeping debate on track or confirming when drinks will be served. Which you go with can determine success from a begrudged necessity eased by free wine.

In my early twenties I was convinced literary events would only be the former, so dragged my flatmate to as many as possible. The fact we couldn’t afford to drink in any other way helped. By our mid twenties we could afford to get drunk in a London pub and so became more selective in our choice of literary event. We decided authors over 60 were usually duds. Successful authors our age on the other hand were obviously assholes. We saw a lot of Will Self, we continued to drink a lot of cheap wine.

This immoderate approach to literary culture makes me cringe now but it was the inconsistency of the events that drove it. Some authors shone in the spotlight, others couldn’t conceal the horror at being obliged to publicize their work. Small publishers sometimes had implausible connections that saw us ushered into private clubs. Other trade houses half roped off an enclosure in a big trade bookseller. Some were raucous, most were tedious, few were well moderated.

There’s no shortage of advice for running good panels, Forbes, Entrepreneur and Inc all have solid guidelines for moderating, especially point 8 on why panels fail:

2. The panelists are self involved and boring

3. Everyone agrees with each other about everything

Publishing is prone to turning its nose up at corporate advice (or anything that can be labeled as such). In the literary community we have an open, informal atmosphere and a civilized regard for one another’s successes that the corporate world lacks. Right? It’s a culture that allows publishers to commune with their future writers and critics and vice versa. Perhaps. It also forces us to have a higher tolerance for loose canons and endure some excruciating Q and A sessions.

Derailed literary events usually have four unmoderated personality types involved. They can turn up in the audience, on the panel or even host the event. Often they’re hardest to bear as audience members, where they’re likely to monopolize any Q and A in the following fashions:

1. The Egocentric. Brass necked hijacking of the Q and A for a mini lecture on own area of interest. If a question does tumble out, it will include multiple references, caveats and anecdotes to impress on the room that the speaker is a fascinating and superior being.

2. The Pedant. Trivial query of inverse proportion to the Pedant’s self regard. Adding nothing to the debate, the question is destined to live on forever as: “The time I had to explain 19th-century narrow rail gauge to Peter Carey. Man’s a complete fool.”

3. The Eulogist. Rambles on heedless of everything. Finally runs out of steam, concluding “so I was wondering what you had to say about that” in a vague tone to baffled silence.

4. The Mad. A broad but persistent category.

I won’t forget one lunatic yelling out “I haven’t understood a fucking word you’ve said all evening” to our speaker. Although there are definitely events where panelists are begging for that to happen. Top combination effort saw an egocentric philosopher planting a pedantic question in the audience in order to let him eulogize his own brilliance.

Moderator: “Any more questions on the condition of modern psychoanalysis?”

Question: “Could you discuss your position in relation to the Charmides?”

Panelist: “I… I’m afraid I haven’t read the Charmides.”

Philosopher (unprompted): “I have and I’m glad you’ve asked that question…”

Followed by a long statement that the Charmides was of crucial importance to the debate at hand. It wasn’t clear that this was the case.

This is where a moderator should come in.

Instead of being there for perfunctory introductions or to say when the wine will be wheeled out, the moderator should be an active editor. They should help pare down meaning by keeping the debate on track and the audience in mind. Or as Mary-Kay Wilmers puts it on London Review of Books proofs: “Did you have a reader in mind when you wrote that?”

Earlier this year, Slice Magazine invited me to moderate a panel at their literary writer’s conference about structuring the incredible. It was an ambitious and interesting topic. Lev Grossman, Helen Phillips and Cecily Wong were our authors of, respectively, The Magicians, The Beautiful Bureaucrat, and Diamond Head.

This invitation was the prompt to consider moderating properly. I was mostly feeling quite flattered and pathetically important before the four personality types materialized in my mind. I remembered a literary event in The Information. A reader asks an author about the high incidence of “he” compared to “she” in his prose. It becomes apparent that the reader is including all “hes” contained within each “she,” so what started out as a gender studies inquiry ends in uncomfortable bafflement.

Slice co-founder Maria Gagliano got this. She stressed that the audience would appreciate practical instruction from our authors. I nodded enthusiastically, although pointlessly as we were speaking on the phone. I emblazoned the words “PRACTICAL INSTRUCTION” in my notebook instead. I then sketched out all the scenarios from previous events I wanted to avoid.

These principles worked well. If I could go with the three most basic outcomes, I’d say follow these steps:

Read the books. I’m not being facetious. One publisher I spoke to said he’d been at several events where the moderator hadn’t read the panelists’ books. A series of vague discursive positions were thrown out and everyone left feeling confused and irritated. I’ve hurled specious nonsense when unprepared, it makes you feel like the penniless Donald Trump. Acknowledging the difference between real time decision-making and winging it is important. So do the reading.

Do not talk about the books. At least not in the way you want to. Helen Phillips’s book is dystopian but with nods to post-structuralism and other intricate motifs. Cecila Wong writes chapters about the Boxer Rebellion alongside Pearl Harbor and in the process of reading Lev Grossman I became a Magician‘s fan-boy. A literary audience hasn’t turned up to hear about your personal reading experience, they want to hear things they can personally identify with. In the case of the Slice conference this was more to do with whether writing within the structure of institutions (Bureaucracy, College, The Family) was deliberate and helpful, whether panelists did consider themselves “Architects” in fiction and was it really possible to map out a plot 100 percent before commencing writing.

Ask your panelists clear questions for interesting answers. This is an introspective age of fiction but that’s (arguably) our gain on the page, not on a panel. Moderators should try to prompt solid commitment from panelists, otherwise it will become wooly. It might not be artful but it does produce contention. Lev Grossman said institutions weren’t a deliberate approach in his writing. Narnia had kings and queens but it didn’t have a tax system or an economy for example. Have your plot written out first and then let the characters react to it. Helen Phillips agreed: you are the emperor of your world, so enjoy it. If you get stuck, consider a character undergoing a value change: they become suspicious, or suddenly lack caution, how is that likely to alter things? Building up a scene and then “slightly spoiling it” was agreed on by all panelists. The little “bit of grit” in a scene that unnerves the characters also attracts the reader.

Finally, round off with a list. Yes listicles can be deplorable but denouncing them can also be a convenient way for pretentious wafflers to avoid being pinned down. If your panelists count themselves as worthy of literary success, they can enumerate a few things for everyone’s benefit. I asked for worst moments in the writing process. Trenchant criticism, sprawling timetables, manuscripts out of control, an inspiring piece of writing one evening that turns out to be cliché ridden the following morning. Rather than superficial Top Tips, we ended up with a sincere and amusing literary confessional that made the business of fiction writing feel human and encouraging.

Good moderation and good writing aligned on good manners. If you’ve done your reading, pose questions and let them be answered it all flows. What you’re saying has more substance, your scenarios have verisimilitude and your audience relaxes, whether they’re in a lecture hall or in front of your book.

Tim Johnson was Advertising Director for the London Review of Books, he is currently an Associate Publisher at The Nation. 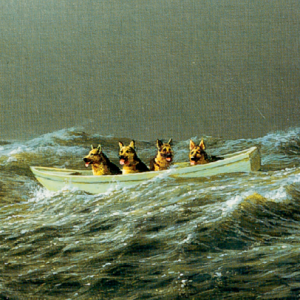 Every season, readers are looking for the most exciting new titles among the stacks that are published. That's why four years...
© LitHub
Back to top