Forrest Trump: On the Donald’s Many Cameos in American Literature

Susan Rieger Finds Him Everywhere, From Twain to Wharton to Lewis...

Since the November election, I have been looking for Trump in literature. This is an old story for me: when I want truth, I read fiction. Closer to the bone, I want to know how this spectacle is going to end and when.

So far fiction hasn’t caught up with Trump. The best early drafts are the late night TV shows which have shredded him satirically, but even Alec Baldwin’s brilliant SNL impersonation, after the laughter dies down, rings as hollow as the man. The mocking portrayals are too much like him. He’s become satire-proof. The sad truth is Trump is so outsized, excessive, and absurd, it’s hard to take him seriously even as we hold our children closer. This is a man, after all, who said, “The day I realized it can be smart to be shallow was, for me, a deep experience.”

In this literary vacuum, the job of taking Trump seriously has fallen as might be expected to op/ed pundits. For months now, they have been earnestly and responsibly churning out dutifully researched analyses explaining Trump. (The best I’ve read is David Robert’s in Vox, May 12, 2017.)  Most of these pieces tend to the same end—narcissism run amok—but, smart as they are, they are never as satisfying or as illuminating as Trump’s Twitter stream-of-unconsciousness. Has there ever has been anyone, who has displayed himself so openly, so obliviously, so bountifully, so illiterately, and so successfully, as he has on Twitter? It’s all there in front of us, if we have eyes to see. Three years ago, Trump wrote: “Many people have said I’m the world’s greatest writer of 140 character sentences.” The Trump novel, when it comes, will be epistolary.

The absence of a Trump novel does not mean there aren’t prototypes. The first and obvious place to look for them is Mark Twain. As Hemingway declared, self-servingly though not completely, “All modern American literature comes from one book by Mark Twain called Huckleberry Finn.”

Trump’s elevation is, among other things, a sad commentary on American education. As my husband is quick to point out, anybody who’s read Huckleberry Finn would recognize him in the cunning, conning Duke and King, the “low-down humbugs and frauds,” whose cynicism is as much a match for Trump’s as their humbuggery. I can almost hear Trump channeling the King, perhaps to the Russian ambassador, in the King’s explanation to the Duke why they shouldn’t truncate one of their schemes. “H’aint we got all the fools in town on our side? And ain’t that a big enough majority in any town?” The King was in fact far more circumspect than Trump. After winning the Nevada Primary, Trump announced to a crowd of his supporters. “We won with the poorly educated. I love the poorly educated.” The crowd cheered.

Willie Stark, the central character of Robert Penn Warren’s All the King’s Men is a second recognizable precursor though less unregenerate than Twain’s rapscallions. The novel is set in the 1930s, in the Depression; Stark is a populist southern governor, often said to be based on Huey Long of Louisiana. If Trump believes anything at all—and that is always a question with him—he seems to believe what he’s saying at the time he says it. Willie Stark started out meaning what he was saying; then he learned not to. His personal aide schooled him in the black arts of political speech making: “Hell, make ’em cry, make ’em laugh, make ’em think you’re their weak erring pal, or make ’em think you’re God-Almighty. Or make ’em mad. Even mad at you. Just stir ’em up, it doesn’t matter how or why, and they’ll love you and come back for more. Pinch ’em in the soft place.  . . . That’s what they come for. Tell ’em anything. But for Sweet Jesus’ sake don’t try to improve their minds.” Trump seems to have always known this but then he had a father who knew it. Hillary didn’t.

Elmer Gantry, the eponymous antihero of Sinclair Lewis’s satirical novel and a corrupt, power hungry, fornicating preacher, is another forebear. Since the novel’s publication in 1927, Gantry’s rise to power has been likened frequently to a politician’s. As Lewis, laying the groundwork, says of Gantry, “He was born to be a senator. He never said anything important, and he always said it sonorously.” Gantry’s creed was the gospel of getting ahead, not so different from the Trump University curriculum except God and not Trump would lead the way. Unlike Trump, Gantry stayed within the world he knew. He didn’t see the Methodist Church as his steppingstone to national politics. Unlike Gantry, Trump wouldn’t be troubled by the preacher’s depravities, the archetypal sins of a clergyman: hypocrisy, mercilessness, and fornication. He wouldn’t know them as sins or think to hide them, as Gantry does. Trump is, after all, the man who asked Howard Stern: “Is it wrong to be more sexually attracted to your daughter than your wife?

The literary character I find most like Trump is in The Custom of the Country, my favorite Edith Wharton novel. The character is a woman, Undine Spragg, named for sea nymphs who have no souls. In her rise in society, money is the currency. She marries money three times, she doesn’t inherit it, and if there is any difference between the two, as roads to wealth and power, Undine’s success, I would hazard, is the more impressive. It is considerably harder, hazarding again, to marry three rich men than to inherit a fortune from your father (though the unhappy history of Trump’s unfortunate brother Fred, makes a distressing case for the other position). In 2012, in a wonderfully smart essay on Wharton in The New Yorker, the novelist Jonathan Franzen describes Undine, Trump-like, “as an unfit member of old New York society . . . the spoiled, ignorant, shallow, amoral, and staggeringly selfish product of the economically booming American hinterland.” He then goes on to say that The Custom of the Country is “the earliest novel to portray an America [Franzen] recognize[s] as fully modern, the first fictional rendering of a culture to which the Kardashians, Twitter, and Fox News would come as no surprise.” One could, though he didn’t back then in more innocent times, add Trump to this list.

Confession: I haven’t read Sinclair Lewis’s It Can’t Happen Here or Philip Roth’s The Plot against America. Ostrich like, I refuse to think about a Hitlerian takeover of our country. Both books begin in 1936, with a political outsider trouncing FDR; and both are less interested in the personality of the fascistic leader than in the sufferings of his victims. Although my Facebook feed is filled with articles portending a totalitarian takeover, I don’t believe it will happen. Trump isn’t Hitler. He’s Chaplin’s Hitler in The Great Dictator.

My own literary take on Trump has found its happiest expression in doggerel, one of the lower forms of literary output but well-suited to the man. I first tried the obvious, a rhyming scheme with his trumped up name, but after a few disappointing verses, I recognized its limitations. Despite the rhyming potential—chump, dump, hump, plump, grump, lump, thump—the verses, had a leaden samenes. Moving on, I played around with Walt Whitman’s Song of Myself, paying close attention to the famous lines which now, ironically if not literally, seem to anticipate Trump: Do I contradict myself? / Very well then I contradict myself, / (I am large, I contain multitudes.) In the end, I decided to appropriate the old children’s counting chant with an added nod to the contained multitudes of the Bard of Democracy. The discipline of the exercise was foreswearing adjectives and adverbs, except of course, in the borrowed first line.

Susan Rieger’s latest, The Heirs, is available now from Crown.

Susan Rieger is the author of the 2014 novel The Divorce Papers, and 2017's The Heirs. She is a graduate of Columbia Law School and has worked as a residential College Dean at Yale and as associate provost at Columbia. She lives in New York City with her husband, the writer David Denby.

Minae Mizumura on Serializing Novels, Aging, and the Eternal Internet 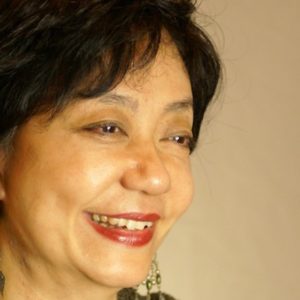 Minae Mizumura on Serializing Novels, Aging, and the Eternal Internet

Atop Minae Mizumura’s website is a brief description: “A Novelist Writing Modern Japanese Literature in the Japanese...
© LitHub
Back to top