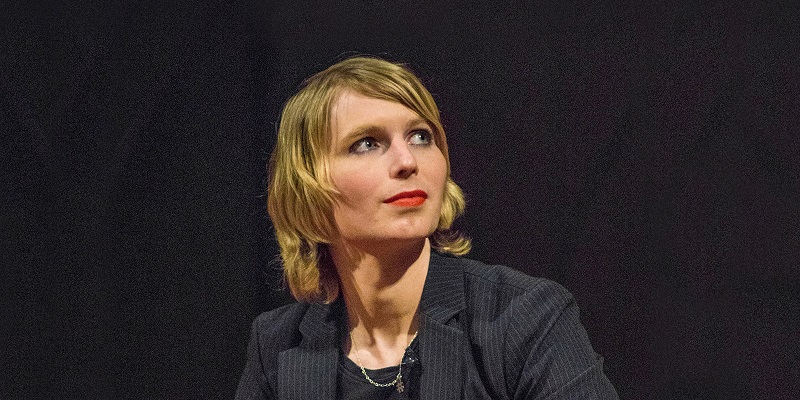 For Chelsea Manning, Coming Out and Whistleblowing Were Deeply Linked

When Chelsea Manning was arrested in May 2010, the key piece of evidence tying her to large-scale leaks to WikiLeaks was a set of chat logs between Manning and Adrian Lamo—a hacker famous for his infiltration of the New York Times website (for which he was arrested and served time)—in which Manning appears to admit to the leaking. Lamo had given the logs to the FBI as well as to a journalist at Wired magazine. The journalist released the logs in abbreviated form, holding back on what Wired viewed as “personal” parts that did not directly reference Manning’s leaking.

In a 2013 essay in The New Republic, Harvard law professor Yochai Benkler portrays Chelsea Manning as part of the “long-respected tradition” of whistleblowers in the United States. Whistleblowers, on Benkler’s account, serve the vital constitutional role of assuring “oversight” of institutions otherwise shrouded in secrecy— for example (and especially), institutions within the arena of national security.

Whistleblowers “offer a pressure valve, constrained by the personal risk whistleblowers take, and fueled by whatever moral courage they can muster.” Benkler argues that Manning should be classed within this tradition— of which Ellsberg is on his account the most notable example— not because of the effects of her actions, but because of the moral “motives” revealed in her statement on her guilty plea.

Benkler’s emphasis on Manning’s moral motives on behalf of “oversight” of government (or private corporations) resonates with broader US scripts about the figure of the “whistleblower,” a term coined in the 1970s by Ralph Nader. Nader similarly locates the importance of the whistleblower in assuring oversight of governmental and corporate organizations (Nader compares the structure of organizations to feudalism), which otherwise might go unchecked. Whistleblowing, Nader says, is the “last line of defense ordinary citizens have against the denial of their rights and the destruction of their interests by secretive and powerful institutions.” Nader also, like Benkler, emphasizes the importance of individual moral “courage” and care for the public good as the proper motivations of the whistleblower. Whistleblowing, Nader says, depends upon individuals’ “professional and individual responsibility,” which consists in “placing responsibility to society over that to an illegal or negligent or unjust organizational policy or activity.” For Nader— as for Benkler— in other words, the whistleblower serves an important role in society as a safeguard for the public good when it is threatened by private interest pursued under shadow of secrecy.

We can see this whistleblower script echoing throughout the many articles and opinion pieces written not only by Benkler, but by Manning’s other defenders. For example, Glenn Greenwald—a prolific defender of Manning writing for Salon and The Guardian—continually refers to Manning as a “whistleblower” and stresses Manning’s morally pure motives. For Greenwald, the Lamo-Manning chat logs show that “the private decided to leak these documents after [s]he became disillusioned with the Iraq war. [S]he described how reading classified documents made [her], for the first time, aware of the breadth of the corruption and violence committed by [her] country and allies. . . .When asked by the informant why [s]he did not sell the documents to a foreign government for profit, Manning replied that [s]he wanted the information to be publicly known in order to trigger ‘worldwide discussion, debates, and reforms.'”

While Manning’s biographer, Denver Nicks, claims that Manning may not be a traditional whistleblower simply due to the vast scope of documents she released—unlike the traditional whistleblower, who releases documents targeted at revealing a specific injustice—he nonetheless stresses that “Manning’s decision to leak state secrets was clearly made with altruistic motivations.”

By portraying Manning as a whistleblower, Manning’s defenders reveal an important part of her story. As Benkler, Greenwald, and Nicks argue, the chat logs between Manning and Lamo and Manning’s guilty plea statement show that Manning was motivated in part by a concern with the public good. Manning tells Lamo, for example, that she would not have sold her data “because its public data”; “it belongs in the public domain. . . .it should be a public good.”

Yet Manning’s chats with Lamo also reveal a narrative of her acts that connects her struggle with state secrecy to her struggle with living under Don’t Ask Don’t Tell and with her gender identity. In her introduction of herself to Lamo, Manning identifies herself in terms of these two aspects of her life: “hi. . .how are you? . . .im an army intelligence analyst, deployed to eastern Baghdad, pending discharge for ‘adjustment disorder’ in lieu of ‘gender identity disorder’. . .im sure you’re pretty busy . . . if you had unprecedented access to classified networks 14 hours a day 7 days a week for 8+ months, what would you do?” For Manning, the thread that ties these two aspects of her life together is clear: mandated secrecy. As she says after referring Lamo to the WikiLeaks website (without directly identifying herself yet as the leaker), “living such an opaque life, has forced me never to take transparency, openness, and honesty for granted.” Manning’s negative experiences of having to hide parts of herself under Don’t Ask Don’t Tell are not separate from her motives for leaking information; rather, they are part of why she feels the need to ensure transparency of military actions.

When Manning’s supporters efface these connections between her personal struggles and her leaking of documents, they do so in order to justify her actions as in service of the public good (rather than private interest or revenge). Yet in so doing, they also unintentionally repeat rather than remedy the injury done to Manning by the Don’t Ask Don’t Tell policy. Their portrayal of her as a whistleblower, and as what Dean Spade and Craig Willse call the “sympathetic gay soldier,” constructs her struggles with gender identity as “secrets” that must be kept if she is to serve the public good. This seems to do a specific injustice to Manning.

It also, however, blocks from view a story implicit in Manning’s self-representation: a story about how supposedly “private” aspects of Manning’s motivations to leak documents may themselves have been formed by Manning’s public experiences of failing to fit into public norms of gender comportment in the army.

To examine the connections drawn by Manning between her public leaking and her supposedly private struggles challenges the dominance of the whistleblower model through which Manning’s actions are usually seen. This model has productively legitimated forms of truth-telling that aim to expose arbitrariness on behalf of assuring accountability and adherence to rules. However, this model also reifies a distinction between public and private that tends to delegitimate forms of truth-telling that do not fit into dominant norms of publicness.

Manning’s insistence on connecting her “private” struggles and public leaking should not be seen as corruptive of the truth, but instead as an attempt to change the world by creating spaces and connections where marginalized individuals can say what the world is like for them and begin to imagine how to make it otherwise.

If the prevalence of the whistleblower model leads us to see Manning’s linkages between public and private as damaging to her credibility, those same linkages mark her as negotiating the dilemmas of an outsider truth-teller: someone whose refusal to comply with norms of publicity and privacy render her illegible to her society as a truth-teller, while also putting her in a position to tell us important and unsettling truths about the public and private realms.

Manning’s insistence on connecting her “private” struggles and public leaking should not be seen as corruptive of the attempt to speak truth, but instead as an attempt to change the world by creating spaces and connections where marginalized individuals can say what the world is like for them and begin to imagine how to make it otherwise.

While the whistleblower reveals facts hidden by the state or corporation on behalf of returning each organization to its proper concern with the public good, transformative truth-tellers like Manning reveal the public/private distinction as an oppressive dyad. Manning’s actions showed the changeability and transformability of those realms in her example and practice of truth-telling, and her actions demanded a public response distinct from the accountability demanded by the whistleblower: namely, a public affirmation of the leaked facts and documents as significant and, hence, of a world where outsider truth-tellers would be seen as meaningful speakers of truth.

We should read Manning’s leaking as an attempt not only to reveal facts, but also to help build a world where she, as a gender-nonconforming person, could be seen as a significant speaker of truth. Read as an act of transformative truth-telling, Manning’s leaking appears less as a failed attempt to assure governmental accountability and more as a risky (and still active) contribution to a world where outsiders, who are silenced and oppressed in both public and private realms, would find connections and freedom, a world still under construction. Lida Maxwell is the Associate Professor of Political Science and Women's, Gender, and Sexuality Studies at Boston University. She is the author of Insurgent Truth and Public Trials: Burke, Zola, Arendt, and the Politics of Lost Causes.

Live at the Red Ink Series:
on the Writer's Quest for Authenticity

For Millennials, Self-Help is More About 'We' Than 'Me' 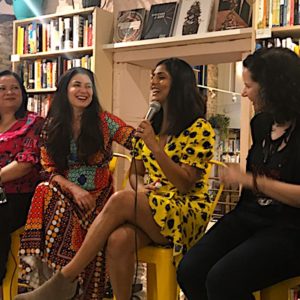 Live at the Red Ink Series:
on the Writer's Quest for Authenticity