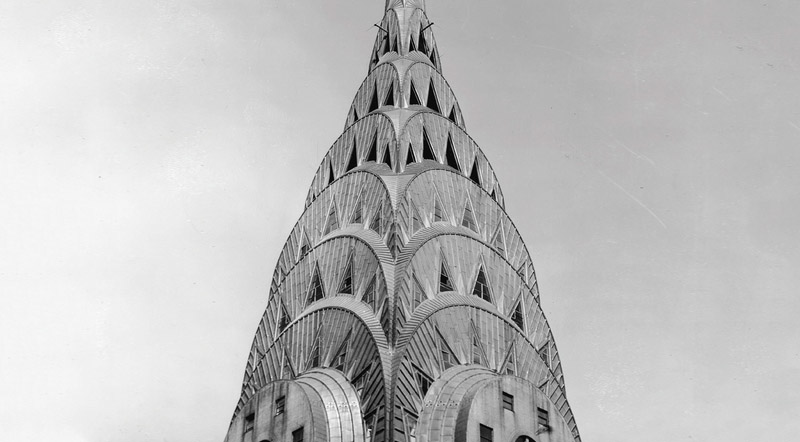 Karl Ove Knausgaard is the headliner at the Paris Review’s Norwegian-American Literary Festival in New York this week. Knausgaard joins his Norwegian editor Geir Gulliksen to talk about “the literature of the real” with James Wood, reads at the Black Bear Bar with Rachel Kushner, Ben Lerner, and Ben Marcus (an author at Knausgaard’s Pelican publishing house (@Palikanenforlag). He speaks to a standing-room-only audience at  Book Court about “the value of literature,” or, as he puts it in Esopus, “Why books, sentences, words?” 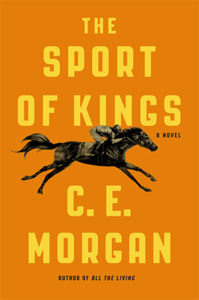 Morgan’s second novel continues to gather critical praise. The author explains her motivations to Cheryl Truman (Kentucky.com): “That is morally reprehensible, that we live in a nation that’s OK with letting people die because they don’t have money. And I will tell you that is the fire that burned under me while I was writing.”

Anthony Domestico (San Francisco Chronicle) calls The Sport of Kings “a novel of vaulting ambition,” “a maximalist work that shifts kaleidoscopically between perspectives and registers, settings and time periods, all in an attempt to reckon the costs of American history.” The novel “marshals linguistic profligacy in order to approach reality’s extravagance,” he adds.

…This deeply cadenced structure, typical of the King James Bible, holds out the promise that if only one more item could be added to the list, the world might be captured in language. It is a sign of Morgan’s mastery that she almost convinces us that she can accomplish this impossible task. There are too many brilliant sentences and richly imagined characters to describe here: Reuben, a black jockey who displays the lightning-fast verbal intelligence of a Shakespearean fool; Henrietta herself, a haunting figure of ravenous hungers — for ideas, for sex, for power. The Sport of Kings roils with anger and shimmers with beauty. It is a contemporary masterpiece.

Most of this novel’s central characters are men, he notes. “Ms. Morgan bears down incisively on topics — the lust for speed and power and domination, the prison experience of black men, male camaraderie, the bonds between fathers and sons, the brute intricacies of the dirty Southern soul — that men have tended to claim. Horses, Faulkner said in Sports Illustrated, tap something in us. That something, in Ms. Morgan’s telling, is only rarely pretty. The subject of reparations for slavery hangs in this novel’s humid air. An elderly black woman utters what are perhaps this novel’s five crucial words: “I am the bill collector.” 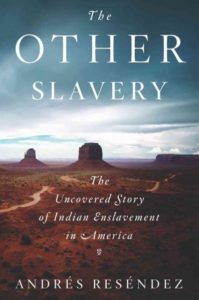 Andrés Reséndez, The Other Slavery

A missing piece of American history is restored by this thoroughly researched study of the enslavement of hundreds of thousands of Indians in North America, from the conquistadors into the twentieth century. Critics hail The Other Slavery for breaking new ground. Here’s Kirkus Reviews: “This eye-opening exposure of the abuse of the indigenous peoples of America is staggering; that the mistreatment continued into the 20th century is beyond disturbing.”

“It is not often that a single work of history can change the course of an entire field and upset the received notions and received knowledge of the generations but that is exactly what The Other Slavery does,” writes David Treuer (Los Angeles Times). “Andrés Reséndez boldly argues that slavery, not necessarily disease and misfortune, was the one part of the colonial matrix that decimated the indigenous population of North America and that the institution of this ‘other slavery’ was the model for all others.” He concludes:

This book is, arguably, one of the most profound contributions to North American history published since Patricia Nelson Limerick’s “Legacy of Conquest” and Richard White’s “The Middle Ground.” But it’s not necessary to be into history to understand its power: Our world is still the world Reséndez so eloquently anatomizes.

“For most of its history, Indian slavery was illegal,” notes Greg Sarris (San Francisco Chronicle), “which undoubtedly accounts for much of our historical myopia… No other book before has so thoroughly related the broad history of Indian slavery in the Americas.”

Genevieve Valentine (NPR) calls the book “a necessary work that occupies a loaded historical landscape; Reséndez keeps a deliberate scholarly distance from the material, bringing forth evidence and constructing careful — even conservative — arguments. But that evidence speaks for itself, and the horrors quietly pile up. The enslavement of communities from North America and the Caribbean broke down entire nations, and irreparably erased cultural and political ecosystems. American schoolchildren are taught that smallpox was the epidemic that gutted Native American populations after exposure to Europeans; an illness to which they had no immunity ravaged their numbers. Reséndez suggests nothing less than that the epidemic was actually the Europeans themselves.” 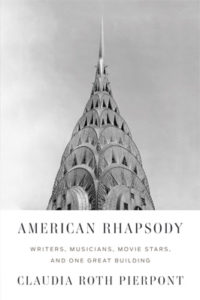 Pierpont is a cultural critic and New Yorker writer, author of Roth Unbound, A Writer and His Books. Her new book of collected essays is named for the working title of George Gershwin’s “Rhapsody in Blue.” She takes on twentieth-century legends from Orson Welles to Nina Simone with her distinctive mix of criticism, biography and history, delighting critics.

“In one guise or another, illusion plays a central role in each of Pierpont’s profiles,” notes Amy Henderson (Washington Post).  “Her book is an ingenious and captivating way to spotlight the kaleidoscopic rhapsody of America’s spirit.”

“This collection of profiles constitutes a fascinating (albeit narrowly focused) little cultural history of America during the last century,” writes Kevin O’Kelly (Christian Science Monitor). “Pierpont writes about figures ranging from Edith Wharton to Nina Simone with sensitivity and erudition – and always in dazzling prose.” He finds the book “compulsively readable and fascinatingly informative.” 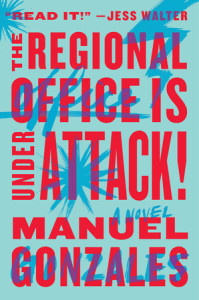 Manuel Gonzalez, The Regional Office Is Under Attack

Gonzalez’s story collection The Miniature Wife won the American Academy of Arts and Letters Sue Kaufman Prize for First Fiction and the John Gardner Fiction Book Award. He frames his first novel as a superhero story. The Regional Office is a team of female super-heroes who are saving the world from oblivion. And yes, it is under attack.

Kelly Braffet (New York Times Book Review) calls Gonzalez’s latest “an entertaining and satisfying novel. Like the best of the stories it satirizes so gently, it’s rollicking good fun on the surface, action-packed and shiny in all the right places; underneath that surface, though, it’s thoughtful and well considered. Gonzales has created a superheroic fighting force of the kind we’ve grown so used to through constant exposure to the Avengers and various iterations of the X-Men, and then he has turned out their pockets and flipped open their diaries.”

The Regional Office Is Under Attack is “fundamentally an office novel, a tale of the prosaic struggles of young adulthood, set, with deliciously rich irony, against a distant background of absurdly operatic adventure,” writes Laura Miller (Slate). “It …repurposes the devices of a genre specializing in fantasies of mastery into a portrait of chastened adults moving through a world where mastery eludes us all.” The novel “sneaks up on you,” she concludes. “It starts out looking like a heist yarn intertwined with a couple of origin stories, but it keeps coming back to the stuff people devour superhero comics and spy thrillers to escape: isolation, confusion, triviality, moral doubt.” 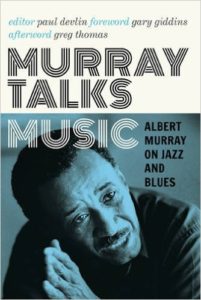 Albert Murray, a literary and jazz critic, essayist and novelist who played a seminal role in American culture, died in 2013 at 96. This new collection by Devlin—co-editor, with Henry Louis Gates Jr., of a Library of America volume of Murray’s essays and memoirs, due out in the fall—collects unpublished essays that display Murray’s singular gift.

“Murray, who died in 2013 at the age of 97, was an accomplished novelist, a kind of modern-day oral philosopher, a founder of Jazz at Lincoln Center, and the writer of a sprawling, idiosyncratic, and consistently astonishing body of literary criticism, first-rate music exposition, and cunning autobiography,” notes Thomas Chatterton Williams (The Nation). “In our current moment of identity politics and multicultural balkanization, the publication of any new Murray text would serve as a powerful reminder that his complex analysis of art and life remain as timely as ever—probably more so.”

Williams calls Devlin’s new volume of previously uncollected interviews “worth the price of admission for its exhaustive introduction alone.” Devlin’s book, he adds, “is both a public service and a testament to how Murray could impress and inspire those who came in contact with him. The interviews would not only interest jazz fans: Whatever the pretext, as Devlin correctly points out, “Murray always brings in the topics he was also most concerned with and also wrote about extensively: literature, visual art, social issues.” Devlin’s book is “as good a place as any to encounter Murray’s prodigious polymath’s mind.”

Watch: Andrés Reséndez talks to Lit Hub at the National Book Awards on the experience of writing his nominated book, The Other Slavery: The Uncovered Story of Indian Enslavement in America.

An Open Letter to the American People 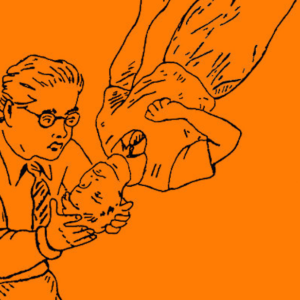 As a young cub reporter I was given my first assignment—to interview the man they call Colonel Baxter. I packed...
© LitHub
Back to top
Loading Comments...