First They Came for the Poets

In Steno’s 1952 film Totò in Color, there’s a legendary scene in which the comedian spits in a guy’s eye. I won’t say any more here; if you haven’t seen it, you can have the good fortune of discovering it now.

This reference serves to introduce a less cheerful topic. Spit into Infinity was the first collection of poems by an anarchist poet from revolutionary Russia. Aleksandr Borisovich Yaroslavsky was executed in the Solovki Island prison in 1930.

The last century imprisoned and killed writers and poets. Here I namecheck a nearly unknown author in order to recap the many more celebrated others. During those years, the powerful recognized literary expression as strategically important. If they couldn’t tame it, and bend it to their service, they feared it so much that they sought to eliminate it physically.

As such, the last century was literary. The assassination of writers and poets shows how their words threatened established power.

In the current century headlines suggest that the physical elimination of dissent has turned to journalists. The powerful today fear that their trafficking will be exposed. For them, the threat comes from independent journalism. As for the dependent variety, they do their jobs as servants to their editors, with loyalty owed to their corporate employers, not their readers.

Beyond reach of the censors, freelance journalism remains isolated and vulnerable. If a worker is killed in the workplace, other workers immediately close up shop, in mourning and in protest. When a journalist is killed, news services don’t declare a strike. Their profession simply rolls with the punches; they get on with the work.

There’s no shortage of fabricated news these days, published not by mistake, but in order to back up stories as shaky as the governments that sell them. Those in charge of information don’t get reprimanded or fired for treason against truth. Instead they get promoted for having pleased the authorities and shown themselves as charming and useful.

This century not only fears truth, it hates it—and desires its physical elimination. Literary speech is less threatening. When writers are out of favor, at most a boycott of their books is encouraged. Once an Italian senator on a rampage took that tack with me; fortunately, he’s since been retired.

The powerful today fear the power of headlines.

From a century that killed poets to one that kills journalists: free speech continues to be the strongest antidote to the unvarying presumption of authoritarianism. Free speech spits in its eye.

Erri De Luca is an Italian novelist, translator, and poet. He is the recipient of the European Prize for Literature along with numerous other rewards.

Ralph Ellison: Coming of Age During the Rise of the KKK 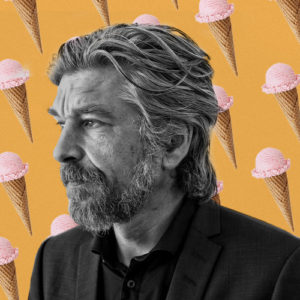 Every year at the start of summer the ice cream manufactur­ers launch new kinds of ice cream, and the same law applies to them...
© LitHub
Back to top