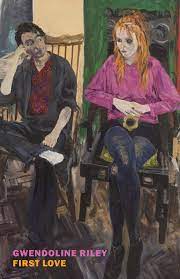 The following is from Gwendoline Riley's First Love. Riley was born in London and published her first novel, Cold Water, in 2002. First Love was shortlisted for the Women’s Prize for Literature, the Dylan Thomas Prize, the Gordon Burn Prize, and won the Geoffrey Faber Memorial Prize. In 2018, the Times Literary Supplement named her one of the twenty best British and Irish novelists working today.

I used to look at houses like this one from the train: behind the ivy-covered embankment, their London brick, sash windows. That was on the Euston approach. The back of this flat – that is, the bedroom, the bathroom and Edwyn’s study – looks out on the overground line, just past West Brompton.

I’ve been here for eighteen months but my boxes only recently came out of storage. Also in the consignment was my metal document case, half-full of old papers, correspondence, a few photo- graphs. I spent a long afternoon unpacking onto the new alcove shelves, deciding what to keep.

When I first moved in, and before that, when I came to visit (I think I came three times), I’d watch for Edwyn in the evenings: standing between the windows, eyeing the shadows out there. This is a short, curved terrace. Mullions and porch columns rib the way. The traffic might build at night but the pavements are never busy; the procession was thin down from Earl’s Court, until at last there he’d be: blond hair poking from a black flat cap, grey overcoat flap- ping, his tatty rucksack on one shoulder. In his free hand he always held a bottle by the neck, wrapped tightly in its striped plastic bag.

Lately it’s the round of coughing in the hallway that lets me know he’s home. I go out and meet him, we have a cuddle, and then I look at the Standard while he gets changed. We don’t talk much in the evenings, but we’re very affectionate. When we cuddle on the landing, and later in the kitchen, I make little noises – little comfort noises – at the back of my throat, as does he. When we cuddle in bed at night, he says, ‘I love you so much!’ or ‘You’re such a lovely little person!’ There are pet names, too. I’m ‘little smelly puss’ before a bath, and ‘little cleany puss’ in my towel on the landing after one; in my dungarees I’m ‘you little Herbert!’ and when I first wake up and breathe on him I’m his ‘little compost heap’ or ‘little cabbage’. Edwyn kisses me repeatingly, and with great emphasis, in the morning.

There have been other names, of course.

‘Just so you know,’ he told me last year, ‘I have no plans to spend my life with a shrew. Just so you know that. A fishwife shrew with a face like a fucking arsehole that’s had…green acid shoved up it.’

‘You can always just get out if you find me so contemptible,’ he went on, feet apart, fists clenched, glaring at me over on the settee. ‘You have to get behind the project, Neve, or get out.’

He shouted this on his way to the bedroom. Twenty minutes later – hot-cheeked, I watched the time on the cooker clock – he came back.

‘I don’t suppose it would occur to you that I’m miserable…’ he said, glumly but scornfully.

There was a lot of shouting from him, back then. Long nights when his agitation, his flinches and side glances, would coalesce into a stronger force. Might you say we were coming to an accommodation, two people who’d always expected, planned, to live their lives alone? I’d never lived with anyone before, I had no idea what it might bring out in me. Certainly I remember feeling that it was his dream world, his symbol world, that we were dragged into during those first arguments, and it frightened me, being given – as I saw it – the part of a training dummy, outfitted in colours, slogans, that I could not see.

Edwyn’s tall, over six feet, and these rooms do sometimes look too small for him. When we were rowing, especially, he’d often hunch himself up, round his shoulders, lower his head. Pacing, then pausing, as if in a spotlight, he’d soliloquize, restating his credo, which was – is – It’s freedom that counts. He’d go on to wonder, haltingly, amazedly, at how he’d boxed himself in (ending up with me in his life, he meant), and when he did address me, it was abstractly, with strange conjectures, ruminations, about what I thought, who I was. ‘I know you hate anyone who didn’t grow up on benefits,’ he’d say, and if I objected he took no notice, or didn’t notice, he only continued, talking over me with mounting scorn: ‘I know you loathe anyone who didn’t grow up in filth, on benefits.’

I used to leave my body, in a way, while this went on. It was so incessant, his phrases so concatenated: there was no way in. These were thick, curtain walls.

Edwyn has said since that he feels it’s me trying to annihilate him. Strange business, isn’t it?

The difference between us, which I did try to keep in mind, was that he really did feel himself under threat back then. He’d had serious heart trouble. An operation. He’d had to lose a lot of weight, stop smoking. Things had settled down by the time we met, but he told me he couldn’t feel safe. Not ever again. He was also starting to suffer terribly with his joints. Fibromyalgia, as we later found out. ‘I’m paying for something,’ he’d snarl, cornered. Or sometimes he’d just sit and sob, and look up at me with frightened eyes when I sat next to him.

Edwyn grew up near Isleworth, an only child. He showed me the house once, the green he used to play on. We walk up that way most Saturdays, unless it’s raining: taking the river path, crossing over at Putney. We hold hands, stop to feed the cruising ducks and coots, admire the doughtier dogs we see. I like hearing about Edwyn when he was small. He was a worried little boy, he tells me, when he was three, and four, scared to leave his mother. But then he did use to race to wave at the trains that passed his garden. ‘I was rushing towards life!’ he says. Later, there was the Nature Club he founded at school, to which he would admit helpers, but no other members. Well, how could he trust them? One early romantic error stays with me, too: how he gave half an Easter egg each to the two girls in his class who liked him, terrified of alienating either one by preferring the other. ‘No, they didn’t think much of that,’ he told me, earnestly, eagerly. ‘I went from two girls to no girls!’

My parents’ old flat was in Chiswick. I’ve looked it up: nudging the touchpad to yaw around Spencer Road, to light on Gunyah Court, which proved to be a small block, set between two more robust-looking, bisque-coloured villas. I could picture the living room, having seen a photograph, but nothing else came back.

Sundays have always been for work. I take the settee. Edwyn brings his papers down from his study. With the last of a glass of wine, and always a bunched-up tissue or two (in his office they call him the ‘Kleenex Kid’, he says), he sits bracketed to the dining table. Also before him is the church candle we light while we eat, and the tin the matchbox is kept in, labelled allumettes. Sometimes the curled fingers of his right hand lift – like piano hammers, I suppose. 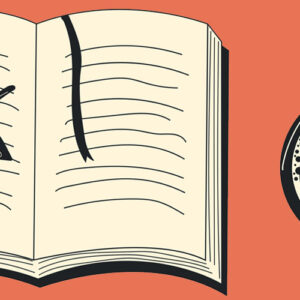 The Ultimate Fall 2022 Books Preview A new season begins, and sure as the changing of the leaves, the recommended reading lists follow. And why not? Soon it will...
© LitHub
Back to top