Finding Solace in the Words of Furious Women

Or, How to Smile at Men Who Tell You What You Want

Until not long ago, I joked that when I smile at men who tell me what I want, I like to pretend I’m holding a knife with my teeth. It’s how I put up with, for instance, the relative who asks, minutes after I’ve arrived at my aunt’s house, when I plan to start having children. “Oh, not anytime soon,” I lie. In truth, I have no such plans. But I’ve talked to this relative five times in the last decade; if I walked past him on a sidewalk, he might not recognize me. He’s balancing his newborn in his lap. I’m being polite.

He tells me I shouldn’t wait too long, so I nod the way I do when I’m not listening. It’s possible he notices; pausing, he asks if I want babies at all. Still, I soften the refusal: “Probably not.”

“I’m sure you’ll change your mind,” he replies, this distant relative who’s certain he knows more than I do about who I am, the body I inhabit. It’s so ridiculous, I have to laugh. He laughs, too, maybe thinking I believe he’s right, and this is when I smile at him.

I realize I’ve had enough of being told I want children. It’s a lifelong chorus, populated with interfering strangers, close friends. Physicians. Multitudes of taxi drivers. Fellow ski-lift passengers. The poet confidant who said, “Isn’t it abnormal, not having kids?” One night, I ask my husband how he replies when he’s advised he’ll change his mind. I’m hoping he has tips, a plan I, too, can use. I’d like to quit fake-smiling. He hesitates, though. It’s obvious he’s at a loss.

I ask a friend, “Is there a big sign on my forehead that says, Please tell me what to do?”

“I’d have said it’s between your legs, but yeah.”

In a crowded bar in San Francisco, a man grabs my ass. I turn, fast, about to yell. White teeth glint down at me. He’s so tall that I’m tilting my head back. His grin says he figures I liked it, his touching me. But it’s not worth it. He’s twice my size: don’t be stupid, walk along.

The following morning, I can’t stop replaying the night. I wish I’d hollered at him, after all. Instead, being silent, I colluded. I let it happen. This is bad logic, I know that, but I also long to believe I’m at fault. If I am, then I’m still in control. I’ll be able to prevent it, next time.

The election happens. Each morning, when I wake up, I have to relearn who the new president will be. I should work, an impending novel-edit deadline, so I force myself out of bed. I write. Muscles hurt. My posture, which used to be excellent, is shot to hell, neck aching, rigid. Shoulders hunch. I put a hand in front of me while I pull up the news, like a shield. It’s as though my body’s trying to protect itself, us.

A poet tells me that her brother’s started living in a small town in Vermont, where a lot of swing voters cast ballots electing the tyrant clown whose name I can’t bring myself to speak, let alone write. On a hunting trip, she says, her brother asked his new buddies what made them vote as they did, thinking they’d bring up guns, jobs, but he’s wrong. No woman should be president, they said, laughing.

I’m with friends in a hot, close room, singing about love. It’s karaoke, and we have jubilant hours to go. Each time we sing, it’s as though we’re mediums, conjuring Nicki Minaj. Joni Mitchell. Disco balls spin candied light. While my husband’s in the bathroom, a man sits down next to me. I haven’t met him before tonight, but he’s friends with the others. His arm circles my waist. It slips past fabric, along bare skin. Okay, it’s an accident, I think, but even as I excuse him, his hand rises. It slides high up my abdomen, spine. He’s taking his time, as if I belong to him.

I don’t want to hurt his feelings, so I’m gentle. I sidle out of reach. The singing’s loud, but I’ve fallen quiet. I can’t tell if people noticed. If they did, they might imagine it’s all my fault. Well, is it? I wouldn’t have thought I flirted with him, but maybe I did. No doubt, I waited too long before moving. He has a wife, a child. I sat in place, docile, while he fondled me.

I ask friends what books they’ve read that spotlight furious women. I’m talking Medea-level wrath, I explain. Like Ferrante’s writing at its raging best. In addition, I want the books to be written by women. I believe, I do, in writers’ ability to invent humans unlike them, but this time I’m craving the real thing, hits of firsthand rage.

The friends oblige. First, I read I Await the Devil’s Coming by Mary MacLane. Published in 1902, it’s the journal of a 19-year-old woman living in Butte, Montana, who’s impatient to get out. She offers the devil marriage, if he’d just show up. “From people who persist in calling my good body ‘mere vile clay’ . . . from fools who tell me what I ‘want’ to do: kind Devil, deliver me,” she prays.

I hurtle through Adrienne Rich’s 1976 classic, Of Woman Born, her manifesto about birth, maternity, and women’s sexuality. Women’s bodies, she argues, are “the terrain on which patriarchy is erected.” I learn from Valeria Luiselli’s incandescent Tell Me How It Ends that eight out of ten Central American migrant women who make it to the U.S. are raped along the way. Since they assume they’ll be assaulted, they take contraceptive precautions before leaving home. “Anger and clarity,” Luiselli says, are what drive her to tell a story.

Next, I read Elisa Albert’s novel, After Birth. It’s pure howl, told by a woman, Ari, who’s been left feeling “gutted like a fish” by a cesarean section she didn’t want. Exhausted by taking care of her infant, Ari says, “Another day gone, okay, and I get it, I got it: I’m over. I no longer exist.” I revisit The Hopeful, by Tracy O’Neill, which is brilliant about a different kind of bodily travail: that of a single-minded figure skater aspiring to be a champion. Then, there’s Roxane Gay’s Hunger, her moving account of having been gang-raped at the age of twelve. Ostracized, ashamed, she took to eating, hoping, she says, “that if I made myself big, my body would be safe.”

I’m asked if I found what I was looking for in these books, if they helped me. I don’t know how to respond. There was fellowship, perhaps, sure. I loved the books; insatiable, I solicit more. But I can’t tell what kind of help I should expect to find, not while I’m still who I am.

I’m just getting through the day, puttering about, when it occurs to me that my hands feel odd. I glance down, startled to find I’m clenching them in fists so tight it hurts.

I’m surfeited, I decide. I’m tired of all this polite lying. I form resolutions, pep-talking myself about the merits of being truthful, bold. I’ll speak up. I won’t smile if I don’t mean it. I’ll drop the jokes.

A man whistles, tells me how I look. I’m walking up a hill: a route I take often, but night’s fallen, and the street’s deserted. Porch lights burn picric, dim. I quicken my pace; he’s still there. “I don’t even get a simple thank you,” he says, then his voice rises. “I’d bet you’ll feel good if you smile. Hey, girl, where’s the funeral?”

No cars go past. I’m alone with this. Maybe, I think, it’ll be enough, so I give him his smile.

R.O. Kwon’s first novel, The Incendiaries, is out now from Riverhead. She is a National Endowment for the Arts Literature Fellow. Her writing has appeared in NOON, The Guardian, VICE, Time, Electric Literature, and elsewhere. She has received awards and fellowships from Yaddo, MacDowell, the Bread Loaf Writers’ Conference, the Sewanee Writers’ Conference, Omi International, and the Norman Mailer Writers’ Colony. 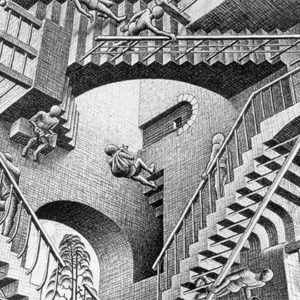 In the realm of book blurbs, “losing oneself in a story” is one of the most unavoidable clichés. See also: "gripping...
© LitHub
Back to top