The astonishingly prolific British author Iris Murdoch published 26 novels in her lifetime. Additionally, her oeuvre includes five books on philosophical issues, six plays, and two volumes of poetry. Murdoch’s prose vacillates between astutely observed and hilariously bizarre, the whole brimming with dark humor and unpredictable plot twists. Her storytelling strips her stiff-upper-lipped characters of their veneer of civility. As she peels the onion of their selves layer by layer, she reveals a hollow core echoing with yet more language.

Murdoch’s own relation to words, speech, writing, stands testament to her conviction that there is no self without language, no route to “ultimate divinity” without the mediating power of words. Predictably, then, her writing is characterized by a rich and imaginatively deployed vocabulary. However, in Murdoch’s later novels the kinkily erudite lexicon that used to be an essential part of her identity becomes progressively depleted.

Upon the 1995 publication of Jackson’s Dilemma, which would be her last novel, Murdoch’s critics and admirers alike were struck not only by the work’s impoverished vocabulary, but also its lack of coherence and other oddities. As Susan Eilenberg put it in the London Review of Books, gone were “the perfection of tone, the witty throwaway symmetries of accident and insight, the artfully balanced . . . rhythms and geometries of passion and form” that had for so long characterized Murdoch’s writing. These trademarks of mastery had been replaced with “prosiness . . . didacticism, and . . . reliance on whimsy, allegory and magic,” which Eilenberg found tedious. Following the launch of Jackson’s Dilemma, Murdoch’s audiences at public appearances noticed that she often appeared bewildered. In 1997 a medical diagnosis confirmed what some had begun to fear: the grande dame of British literature, then 77, had Alzheimer’s.

With revisionary hindsight, everyone from linguists to neuroscientists to her own husband found in Murdoch’s past behavior and writings harbingers of the dementia that would completely erase her identity—and indeed her life—in the short span of two years. Her husband, John Bayley, traced journal entries back to 1993 that struck him as out of character. While Murdoch had based the very possibility of a relationship with Bayley on his unqualified respect for her private self-sufficiency—a stipulation that even required him to condone her affairs that spanned their 45-year marriage—in her final years Murdoch declared a growing emotional dependence on him that implied the fracturing, even the disintegration, of her formerly impenetrable self. Affectionately referring to him as Puss, she writes, “My friends, my friends, I say to the teacups and spoons. Such intense love for Puss—more and more.” After Murdoch’s death, Bayley applies the idiosyncratic wisdom of the poet A.D. Hope to their last years together by saying that he and Iris had moved “closer and closer apart.”

As Murdoch’s illness continued to crumble away her language and reason, she gradually abandoned attempts to write. Soon sense departed from her speech as well—except to him who loved her deepest and longest. There came a day when Iris laid her hand on Puss’s knee and said, “Susten poujin drom love poujin? Poujin susten?” Bayley needed no more help than her hand gentling his cheek to distill from this jumble the grammar of love.

Given Murdoch’s well-known desire for privacy, her apparent concession to turn her journals and manuscripts over to Bayley for publication was a radical departure in her behavior. Did she give up her privacy because her fame had made it impossible to keep news of her illness from the public? Had the dementia already changed her identity or eroded her self-confidence, thereby engendering a reliance on Bayley that brooked no resistance? However it came about, through Bayley’s publication of a chapter of Elegy for Iris in the New Yorker in July 1998 and the completed book a few months later, outsiders gained unprecedented access to Murdoch’s “case” even before her death in February 1999.

In Elegy for Iris, John Bayley writes, “I was far too preoccupied at the time to think of such parallels, but it was like living in a fairy story—the kind with sinister overtones and not always a happy ending—in which a young man loves a beautiful maiden who returns his love but is always disappearing into some unknown and mysterious world, about which she will reveal nothing.”

After Murdoch’s death and the confirmation of her Alzheimer’s through autopsy, Dr. Peter Garrard, a neuroscientist at the University College London and the Medical Research Council’s Cognition and Brain Sciences Unit, was drawn to her as an ideal object of study: could her abundantly documented mental life yield clues of a cognitive decline not yet measurable by clinical tools such as the MMSE (Mini-Mental State Examination), a questionnaire used by researchers and medical professionals to screen for dementia? Since Murdoch wrote only in longhand, made few revisions to her manuscripts, and seldom allowed publishers to make any changes at all, her manuscripts, Garrard wrote, “offer[ed] a unique opportunity to explore the effects of the early stages of Alzheimer’s disease on spontaneous writing.” Should the in-text harbingers of insidious cognitive decline that Garrard hypothesized be confirmed, the oeuvres of other novelists, as well as collections of letters, diaries, or blogs of people later diagnosed with dementia, would become a valuable resource for study on how, in Garrard’s words, “the vast, structured network of information that endows objects and words with meaning” breaks down.

Garrard and his team analyzed the manuscripts of three novels that trisect the span of Murdoch’s career: her first published work, Under the Net (1954); a novel written during her prime, The Sea, the Sea (1978); and her final novel, Jackson’s Dilemma (1995), written before she showed any signs of cognitive decline. They compared characteristics such as grammar, narrative structure, vocabulary range, word types (i.e., nouns, verbs, conjunctions, pronouns, and other word categories), and the rate at which previously unused words are introduced.

Garrard’s results reveal that Murdoch’s linguistic creativity dwindled markedly over an almost 20-year period, that is, since The Sea, the Sea. In Jackson’s Dilemma, he found a precipitous drop in the number of word types Murdoch used, the frequency at which she employed previously unused words, and her range of vocabulary. Remarkably, though, the narrative structure and grammar of Murdoch’s books remained essentially unchanged over her writing life, a result that confirms the findings of previous speech studies on individuals with Alzheimer’s: even as the linguistic content of patients becomes nonsensical, they continue to produce grammatically well-formed sentences.

In light of these findings, one could argue that even her unintelligible statement to Bayley—“Susten poujin drom love poujin? Poujin susten? ”—retains a grammatical structure—enough to entice one to add punctuation, hunt for a code, and discover sound-alike words to substitute for the indecipherable ones.

Still, to insist that the lines must make logical sense is to deny the harsh truth of dementia: the disease progressively destroys the very self that used to be capable of love and its expression. It eats its way into your brain, into the frontal and temporal lobes where (in a healthy brain) language is logically interpreted and reproduced. It feasts on Wernicke’s area, where meaning is associated with speech sounds and the written shapes of words, gorges itself on Broca’s area, where words are systematically deployed in the grammar of a particular language to produce meaning. As the disease waxes, so you wane; as it burgeons, so you contract. Its answer to Murdoch’s question “When are we going?” is “We have already left. It is only a matter of time before we arrive.”

My dear, I am now going away for some time. I hope you will be well.

Ten months after being diagnosed with early onset dementia, I retired from my position as the associate director of the University of Utah’s Gender Studies Program. It was August 2011. I had not planned to retire for at least two more years. However, the memory problems persuaded me to leave on my own accord rather than risk a future day when a nervous colleague would pull me aside to discuss some serious gaffe or strange behavior with which I had unknowingly embarrassed myself or the program. […]

“Going away” is something that happens to me without warning. I might be in the middle of slicing an avocado when making dinner with Peter; meeting my friends for a cup of coffee; going downstairs to do the laundry (and instead arranging my jewelry by function, metal type, and color in ice cube trays recommended by Redbook for the purpose); walking to the front door to answer my grandson’s knock (a big-eyed Hennie-Boshoff lookalike with a penchant for launching himself at my thighs so powerfully that my swooping up of his four-year-old body to my chest momentarily becomes the only grammar I can summon for love).

I do not want to go away.

Like Iris Murdoch and John Bayley, my husband Peter and I met on a university campus. Like them, we hope to demonstrate that love can thrive in the “uncompromising familiarity” brought about by dementia. There, though, the similarity ends.

Peter and I fell in love at the University of Pretoria in a physics lecture hall, surrounded by 200 other first-year students, when I was 17 and Peter 19. Since that day, my love for him has anchored me to the wondrous reality of right here, right now. In the months and years that followed, the connection each of us felt in that first moment evolved into a—so far—49-year relationship, the last 45 of which played amid the long haul love of marriage. Going away was far from my mind, or rather, together Peter and I were already away, borne aloft by the “holiness of the heart’s affections.”

Redemption has been—is—everywhere, everywhen, as close at hand as the unknown girl we spot out the car window picking up a maple leaf the size of a breakfast plate, as algorithmic as the yellow-gold fall carpet in our yard that we rake into ad hoc nests into which our grandchildren plunge headlong like our children did in their time, Peter and I in ours, our forebears in theirs, and generations to come will do until the sun becomes a black dwarf and there are no trees to reconsider their leaves, conclude that their verdancy is the price of routing all nutrients to the trunks and roots so they may survive the winter, revoke the photosynthesizing privileges of the foliage (thereby unmasking the golden, orange, and yellow hues of carotenoid pigments hidden all summer by the shocking green of chlorophyll), dispatch a chemical Dear John letter that reads “Go away! ” to every leaf, each of which stoically replies with a bumpy line of scissor cells that snips the leaf from the stem until it hangs on by a few threads of xylem so fine that the next breeze launches the golden glider upward on a small, looping whirlwind, which, like a lover on the rebound, soon casts it to the ground. 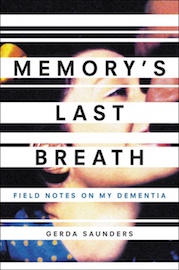 Gerda Saunders emigrated to the United States from South Africa in 1984. In 1996 she received a PhD in English from the University of Utah, where she later served as associate director of the Gender Studies Program. Saunders is the author of the short story collection Blessings on the Sheep Dog. She has spoken with the BBC and The Huffington Post about living with dementia, and is the subject of a series of short films being produced by VideoWest and featured on Slate. 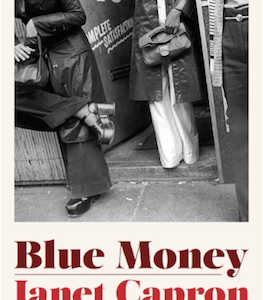 The taxi sailed downtown along the East River, on its way to deliver me to my first whorehouse. Corinne had referred me to her colleague...
© LitHub
Back to top
Loading Comments...