Episode 10: From State-Sanctioned Holocaust Denial to the Rise of the Alt-Right

Recently, the Polish Senate passed a law that would criminalize any suggestions of complicity by the Polish state in Nazi war crimes, including the Holocaust. In this episode of Fiction/Non/Fiction, V.V. Ganeshananthan and Whitney Terrell talk to the novelist Steve Yarbrough about the nationalist Law and Justice party, which is behind the ban—and how their authoritarian tactics mirror those of the Trump Administration. Yarbrough’s new novel, The Unmade World, is set in contemporary Poland and America. Then we talk to the novelist Eileen Pollack about Charlottesville, the history of anti-Semitism in the US and how her 2012 novel, Breaking and Entering, anticipated the rise of the alt-Right.

From the episode, part one:

V.V. Ganeshananthan: In 2015 (in Poland), the Kaczyńskis’ Law and Justice party won again. What was their appeal, and did you feel any of these changes beginning to happen when you were living there? I mean, you’re describing people feeling economically disenfranchised. Can you talk a little bit more about that?

Steve Yarbrough: To some extent, when you’re a foreigner living there, even if you know the country well, you’re a little bit insulated from the changes. It didn’t really affect the way we lived our day-to-day lives, but we’ve got a lot of friends who are Polish artists, writers, intellectuals. They tell me frequently, “You may not realize just how bad it could get,” and that turned out to be true walking around Krakow. Until I started taking part in the protests where I occasionally found myself being heckled by folks who would have been right at home in an alt-right rally in Charlottesville, I wasn’t really exposed that much, but you can certainly see the changes now. And I think what has also happened there, that I think is fairly similar to what has happened here, is that I have the perception that the protest movement there over the last six to twelve months… people have gotten very, very weary. I think people are getting tired of taking to the streets. I think they’re starting to become a little more accepting.

Whitney Terrell: You mean like they’ll give up? They’ll let it happen?

SY: It’s hard to imagine Poles giving up, but things may have to get worse.

WT: I mean, it seems pretty bad. You have a character later in the book [The Unmade World]. I’m reading from page 347. We’re right about this time that we’re talking about now, and this character says, “They are letting people go left and right… All you have to do is oppose them.” He’s talking about the Law and Justice party. “They started out with the media, firing producers and reporters from the state-run networks. Then they began cleaning house at publicly funded cultural institutions: museums, theatres, and so on. At the Ministry of Agriculture, they even fired the director of a stud farm.” This sort of wholesale intellectual banishment seems quite shocking.

SY: Well, yeah except that then you’ve got a lot of people who are already resentful of the elites, and you know this is a script we know well in this country.

WT: [laughter] I mean, Trump would fire everybody at CNN if he could, I guess.

SY: Oh, I’m sure he would. And let’s hope that he never gets a chance to…

SY: But that’s what they did. They just cleaned house, but once again, something else they did that you may not know about—and this was one of their drawing cards they announced as part of their platform—that when they came to power, they were going to give every single family 500 zlotys a month for every child beyond the first child. It doesn’t matter, by the way, if you’re a millionaire or if you’re basically living on next to nothing in a village. If you’ve got five kids, you’re going to get 2,000 zlotys a month. So, on the one hand, yes, they’ve got a conservative platform. On the other hand, they’re also engaging in state socialism, and 2,000 zlotys a month for somebody living out in a village and barely able to eat, it’s significant. So, in that sense, they’ve bought the election.

From the episode, part two:

V.V. Ganeshananthan: One of the striking things to me about Breaking and Entering (by Eileen Pollack) is the way it exposes the bigotry that still runs in the US, and as the scene with Louise and Richard shows, I think, one of the disagreements that I feel like I’ve been hearing for the past year [is about] the degree of alarm we should be experiencing about bigotry in general and anti-Semitism in particular. Is it bad enough? Is it anti-Semitism yet? Is it anti-blackness yet? Is it racist yet? Should we be worried yet? Can we use the word racist yet? And then if we’ve decided that we’re worried, what is actually the action that we’re supposed to take? And I’m curious how you thought about portraying that with Louise and Richard.

Eileen Pollack: You know, anti-Semitism in America isn’t—I don’t feel it’s held me back in ways that I think that, you know, anti-blackness holds back most black people. I’ve never not gotten a job because I’m Jewish or anything like that, and, you know, it’s not identifiable as I’m walking down the street. But, you know, if I go to a synagogue—and this has been true for years—there are armed guards there because we’re afraid that somebody’s gonna come in and blow us up or shoot us because we’re Jewish. Or at the JCC: The security measures have been very strong for a long time. And I think there are groups that are sort of crazy this way and are dangerous, but they’ve been there for a long time—they’re still there now. I think Trump is giving them a kind of permission to come out of the woodwork. But they’ve been there and I think yes, it’s always been anti-Semitism, and racism, and I think people just have their heads in the sand. When I tried to publish this book, no editor in New York would publish it. They thought I was crazy. They looked around Manhattan and said, “this isn’t going on here–”

Whitney Terrell: Oh, they thought it was too extreme? They just didn’t believe…

EP: Yeah, no, they didn’t believe it.

EP: I could show you the kinds of things they wrote in the margins [laughter]. Which today, you know, you would look and go, “Oh, yeah, she was right.”

WT: I mean, my wife is Jewish and we were married in 2003 and we have two kids, and this issue was not something that we talked about… She teaches about the Holocaust, it’s her religion, it’s an important part of her life…. When I saw the alt-right in Charlottesville chanting, “Jews will not replace us,” you know, it felt very personal. If you were to take this story forward, or reimagine it in the light since everything that’s happened since 2012, how would it be different? Or would it be even more intense? And are you surprised at how much anti-Semitism—its openness has increased in the United States since you wrote the book?

EP: No I’m not surprised—I think Jews like me have this feeling, like when it comes out there’s almost a sense of relief, because you just feel like people aren’t gonna think you’re crazy any more. Um… there it is. So when I was researching this book, I was researching some of the really white identity groups, and there’s one that really hates Jews in particular, and their motto is, “if you’re standing close enough to a Jew to run a sword through him, you should.” And you think, “Oh, that’s crazy, there’s nobody who really is like that,” but they have certain slogans, like they are “the true sons of Adam.” And I literally put down the book I had been reading about this group and drove across Ann Arbor to Zingerman’s Deli to get the bread for my son’s bar mitzvah. That’s how funny this is. And I was stopped in traffic and I was reading the bumper sticker on the car in front of me, and it said, “I am a true son of Adam.” He was a member of the group.

VVG: I’m curious about how all of this connects to the alt-right, to Trump, and the Michigan militias: is it a straight line between those things? Because anti-black racism and anti-Semitism—I think I see your point about those situations being really different in the way that they’re lived, yet at the same time the rhetoric is often tied. And Whitney was observing earlier in this episode that the demographics are different in Europe, but white supremacy seems to have this powerful hold on the national imaginary in both places, and to be gaining traction regardless of [immigration]—I think Poland is something like 98 percent white European descent. And still this xenophobia, and questions about immigration are really, really getting a lot of attention.

EP: I think that the history in America of the tie between racism and anti-Semitism is slightly different, so you know the traditional narrative has been—or the fear has been—that Jews are the masterminds behind the decay or destruction of white Christian civilization in America, and that our “instrument” is the black population, so we’ve found ways to unleash the “black menace” on white society through civil rights, and left-wing politics, and, you know, homosexuality… The idea that there’s this liberal agenda to destroy white civilization and Jews are the lawyers, and scientists and psychologists and everything behind this great “conspiracy.” 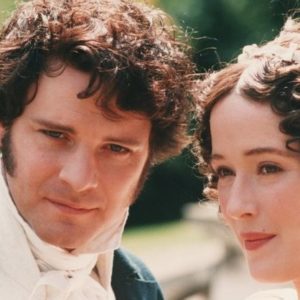 This essay originally appeared in 1998. * Jane Austen, as they might say in Los Angeles, is suddenly hotter than Quentin...
© LitHub
Back to top
Loading Comments...
Comment
×