Fairy Tales and Facts: Siri Hustvedt on How We Read in a Pandemic

"Separate and Secluded" We Pass Our Days

Reading is an intimate encounter that does not require social distance. In our current world of restricted movement, the book is a geography where complete freedom remains possible. But what a person reads during a pandemic, it seems to me, has no moral quality. The moral decision has already been made. Protect yourself to protect others. Stay put if you can. But no one is obliged to steep herself in the science of virology or the earth’s complex and fragile ecosystems or novels about the plague or poems about death and dying. They are all possible choices—as is a turn to comedy, a form distinguished by its ending: It all works out.

The fairy tale is another buoyant genre. The hero or heroine is tested sorely, but in the end, he or she is rewarded with happiness. And fairy tales have magic. The laws of nature are overturned and replaced by human desires. Human beings often believe their wishes will come true, and they often do so without reason. Reading offers a safe road to a variety of vicarious gratifications.

The question is: If you are well and at home and have enough to eat and can concentrate on a book, do you read toward or away from your fear? Reading for comfort and escape is readily explicable. But why read about what you fear? Since Aristotle used the word catharsis in his Poetics without explaining exactly what he meant, philosophers have puzzled over the undeniable fact that people take a weird pleasure from art that describes terrible events. Why do we enjoy weeping over the sorrows of characters in books?  Why do gruesome stories of war, murder, and even uncontrollable contagions seem to relieve some of the pressure and anxiety of this real moment when the authorities scramble to find room for the growing number of corpses in New York City?

Why bother with art, after all? Why not consume every factual tidbit available about the virus and its spread, the best mask to wear, or how to clean your groceries to avoid contamination? Isn’t this the age of facts versus fakery? What could fiction with its imaginary ramblings possibly give anyone at such a time, except an escape into the unreal? “Just the facts, ma’am” has become a mantra in an age of lies, the lifebuoy to which the noble opposition clings to keep from going under. When a statement from on high, “Everyone who wants a test can get a test” actually means, “Hardly anyone can get a test because they aren’t available,” public outrage is entirely reasonable, but facts, important as they are, remain limited and puny things that must be interpreted.

For example, what does a brand new fact (or possible fact)—more men are dying of corona virus than women—actually mean? It could mean the data is unreliable and incomplete. It might be related to modulating genes on the X chromosome that affect the immune system. Maybe the female double X is somehow protective. It could be related to the fact that men have more untreated health conditions than women because they see doctors less often—a sociological reality that makes them more vulnerable. Macho stoicism becomes risk factor.

What could fiction with its imaginary ramblings possibly give anyone at such a time, except an escape into the unreal?

One can easily imagine a novelist taking this possible fact and pushing it across a limit—only men are vulnerable to a new plague that has taken over the globe, a scourge which leaves the XY demented, frail, or dead. The very survival of the species is threatened. The startling numbers of sick and dying men have turned the age-old hierarchy upside down. All authority now lies with the clear heads and strong hands of those who had long been dubbed “the weaker sex.” From a scientific point of view, the narrative is highly dubious. Despite much advertising to the contrary, male and female physiologies are more the same than different. And yet, as far as I can tell, almost every novel or story that somehow relates to disease epidemics has been popping up on “what to read during the virus” lists. Does the very fact that these exist testify to something more than filling up culture pages or screens with the timely and relevant?

In a country that denigrates the humanities and champions STEM fields, a country that cuts budgets for all the arts, a country in which poetry, the novel, and the arts in general are regarded as mostly fluffy, imaginary stuff for women (who are the principal consumers of all art), I have wondered why at this moment articles about imaginative fiction have been appearing all over the place. A number of these writers are not literary people, but they have taken to promoting the wisdom of the imaginary. Camus’ The Plague is selling well. In France, it is topping bestseller charts. Katherine Ann Porter’s Pale Horse/Pale Rider, which treats the 1918 flu pandemic has been disinterred. I read it again. Its delirium passages are extraordinary.

Although I haven’t read anyone who has been explicit about why some people turn to literature during a crisis, I suspect that implicit in these literary resurrections is an understanding that “the news” and “facts” are impersonal, and even when they are advertised as personal, they fill a slot, the “heart-warming story,” for example—half a minute on an adorable toddler waving through the glass at Grandpa, or a noble nurse on “the front lines,” or the sweet young woman who carries groceries for the old lady next door. They are intended as a momentary lift for reader or viewer “at home.” The emotional manipulation is calculated. When it is good, literature moves the personal into other territory altogether and in the process becomes collective.

I have found that certain detective novels slide through me like water, and if I stumble across one I have already read, I do not remember it until late in the game.

There are countless novelists that manipulate readers as mercilessly as television producers. They fulfill the expectations of their readers and their books sell like hotcakes. They serve an important purpose in the culture, just as comfort food does. In my own life, I have found that certain detective novels slide through me like water, and if I stumble across one I have already read, I do not remember it until late in the game, sometimes not at all. This kind of reading is like eating chocolate in bed. I am all for it. And yet, it may be that during moments when death is close and perhaps imminent, at least some readers crave an experience that is beyond what they expect, beyond the endlessly repeated platitudes on radio and TV and the Internet. My own tolerance for breathless reports on the virus has plummeted. I turn them off now.

At the last dinner party I attended on March 7, Boccaccio’s Decameron (1350-1353) came up. I fell ill on March 11, not seriously. I had headache, body aches, chills, cough, chest constriction but no fever. I was in bed for a week and then the symptoms lingered. I recovered. There were no tests so I don’t know if it was Covid-19 or something else, but Boccaccio’s book, which I have long loved, haunted me as I lay in bed, and I returned to it.

The prologue gives a vivid description of “the deadly pestilence” wending its way through Florence. It describes the apple and egg-sized tumors that grow in the groins and armpits of the afflicted, its spread from person to person contact but also from touching infected garments. And the narrator describes the varying responses to the plague. There are those who withdraw to live “a separate and secluded life” of imagined safety, others who throw themselves into mad revelry and flout all authority, and a third more moderate group that tries to be sensible, neither terrified nor negligent. Everyone is vulnerable. The corpses pile up, and the city becomes a “sepulcher.” This reading felt cathartic. 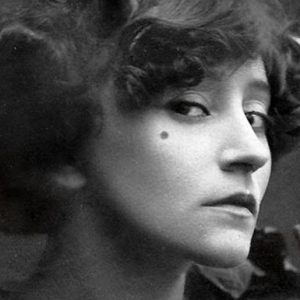 How Plants Helped Colette Satisfy an Insatiable Desire Colette was modern France’s most lauded woman author. But she also had a second career as a scandal. In 1893 she arrived...
© LitHub
Back to top