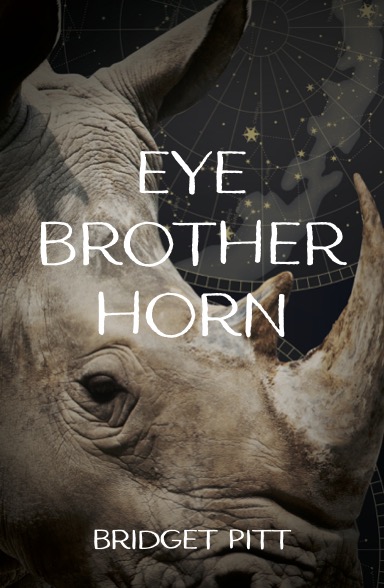 The following is from Bridget Pitt's Eye Brother Horn. Pitt is a South African author and environmental activist who has published poetry, short fiction, non-fiction and three novels (Unbroken Wing, The Unseen Leopard, which was shortlisted for the Commonwealth Book Prize and the Wole Soyinka African Literature Award, and Notes from the Lost Property Department). Her short fiction has been published in anthologies in South Africa, Canada, and the United Kingdom.

Mvelinqangi made everything. That’s what Gogo says. Mvelinqangi made the first human in the sky and lowered him to earth with a rope plaited from the intestines of an ox. The whole sky is his umuzi. The stars shine through holes in the ground of the sky that were created by the passing hooves of Mvelinqangi’s cattle—the Milky Way is the entrance to the kraal. The earth is held up by four white oxen, and death came to the world because the chameleon was slower than the lizard.

In Gogo’s stories, women give birth to crows and snakes; children cast out by jealous brothers grow up and come back as kings; a boy turns the assegais of his enemies to water; and another lives all his life on the back of a white ox. Gogo watches Moses as she tells the stories and asks him to repeat things she told him the day before.

Moses’ favorite story is about Sithungusobendle (she who gathers the fibers to make skirts for young girls), who was stolen from her mother by the amajuba, the rock pigeons. They flew off with her to their land beyond the seas and made her their queen, but she never forgot her mother. Many years later she used her cunning to outwit the pigeons and escape with her children. When she came to the sea, she cried, “Sea, Sea, divide! I am uSthungusobendle!” And the seas at once divided. The king of the pigeons and his army were racing after her, but the seas closed behind her and the amajuba all drowned.

When Sithungusobendle came home she found only a mountain which was actually isiququmadevu, a great monster with smelly black whiskers that had consumed her entire village. She slit its stomach with her assegai and out came the fowls and the goats and the cattle and the dogs and at last all the people, and everyone was happy again.

Acting out this story becomes a favorite game. The best part is killing the isiququmadevu monster—which is the dung heap behind the stables—with Joseph’s hay rake serving as its teeth. The boys plunge their wooden swords into the steaming pile again and again, pretending that the dung beetles scuttling out in alarm are the liberated villagers and animals. At night, the disemboweled monster grows back together and snaps at the heels of Moses’ dreams with its sharp iron teeth and dung on its breath.

These stories unfold when they follow Gogo around as she does her daily chores. They seem to haunt the places where they are first revealed. Mvelinqangi emerges from the billowing steam as Gogo stirs the sheets in the great copper pot in the outside kitchen. Mbadlanyana, who outwitted

a cannibal by shrinking and hiding in his nostril, creeps out of the red earth when Gogo’s hoe bites into the weeds of the cornfield. The isiququmadevu meets its end amongst the vegetable peels falling from her pail into the pigs’ trough.

One afternoon when they’re turning the soil to plant new beans, a small brown bird calls out with the sound like a clock whirring before it strikes. Gogo’s eyes crinkle into a smile as though she is hearing the voice of a dear friend after a long absence. “Unomtsheketshe! The honey guide…” she exclaims. “Run quickly and fetch a bowl from the kitchen.”

They follow the bird with Gogo talking to it all the while, saying, “Oh honey guide, who calls the women while they are digging, speak that I might hear you.” The bird flies ahead, perches on a boulder or branch and calls to them until they catch up, then flies off again. At last, they come to a tree with a hole from which a thin thread of bees flies in and out. Gogo makes another hole on the opposite side of the tree with her knife. She croons her thanks to the bees and praises them for their industriousness and beauty. The bees crawl on her face and hand, as if getting to know her. She plunges her hand into the hole she made, pulls out a comb dripping with honey, and lays it in the white enamel bowl. “Don’t collect honey yourself until you know how to talk to bees, for they’ll surely sting you,” she warns. Moses dips his finger into the golden liquid pooling in the bowl and licks it, his eyes widening at the warm woody sweetness.

Their mother doesn’t know how to speak to honey birds, but she produces her own miracle by laying a hard white bean between two layers of damp cloth. A few days later, a pale root starts creeping out of the bean, followed by a curled tendril with two leaves. They plant it outside the kitchen and watch it grow. In a few weeks it’s taller than Daniel, then taller than Moses. One night Moses dreams that the beanstalk grows all the way to the sky, like the one Jack climbed, and uMvelinqangi creeps down it and snatches him from his bed. In the morning he tells Daniel his dream. Daniel steals the big black kitchen scissors and cuts down the beanstalk. Everyone is cross, but Moses sleeps better that night.

They spend their mornings with Kazi, scratching letters and numbers onto their slates. Numbers come to Moses as something he has always known, a language he was talking before he was born. He counts everything—the pale ducklings flopping after the mother duck, the potatoes

to be washed for dinner. Each night he tries to count the stars, kneeling on the blanket chest by the window and whispering numbers long after Daniel has fallen asleep. The numbers seem to float out from the stars, weaving among them, forming strange patterns and inscriptions in the black sky. He counts until his chest threatens to burst with the infinity of it, with the possibility of containing the infinity in a number.

In Kazi’s world, the big bird with the red face and heavy beak is a turkey buzzard. But in Gogo’s world, it is insingizi, the rain bird, which you must never kill. For if you do, it will rain until the whole world is drowning. These two worlds live in Moses, side by side.

Daniel calls his father uMfundisi, like everyone else at the mission. uMfundisi knows all about God and reads from the Bible every Sunday after church. The words are too big to fit into Daniel’s ears—each sentence rumbles at him like a wagon full of stern old men, frowning because he can’t understand what they want. After reading, their father reminds the boys of the naughty things they’ve done to make Jesus sad, such as forgetting to close the gate of the hen coop or gathering too many eggs at once and dropping them.

That golden-headed baby Jesus in the picture on the wall looks far too happy to be bothered by a broken egg. But one day a new Jesus arrives in an ox wagon—a small wooden mannequin nailed to a high dark cross. This Jesus looks down from his cross with such stiff outrage that Daniel understands His sorrow to be a terrible thing. How shameful that their persistent naughtiness somehow caused Jesus to be transformed from the shiny-headed baby to this sad little man on the cross! He tries his best to be good, but even on his best days, Jesus seems unappeased.

It’s all Satan’s fault. uMfundisi says Satan is always trying to make you do bad things. Daniel and Moses play games of stuffing Satan into holes in tree trunks or burying him. They make a mud Satan and poke it with the long white thorns of the acacia trees and roll it down the hill. They throw stones at tree trunks that are really Satan in disguise. Satan is good at hiding, but Moses always knows where to find him.

Their father tells them Bible stories. He especially likes the one about Moses, who was sent down the river in a basket by his parents. He says that Moses grew up to be a great leader who led his people out of slavery. He even made the sea dry up so that his people could cross it and reach the promised land. When Moses says that uSthungusobendle also made the sea dry up, their father winces, as if he’d been eating raisins and bitten on a stone. He says that Gogo’s stories are just fairytales, made–up nonsense. But the stories of Moses are true, real things that happened, like everything else in the Bible. Nothing is more real or more true than the Bible.

“One day, Moses, I believe that you too will lead your people out of darkness and into the light of the Lord. That’s why God told me to call you Moses. He has called you to be His servant, so you must always strive to be good.”

Daniel wonders who Moses’ people are, and whether he, like Sithungusobendle, will have to slit open the belly of a monster to get them. But he doesn’t ask. Their father doesn’t like stories that aren’t Bible stories. Daniel also has a Bible story named after him, about a man who made friends with a lion, which he thinks sounds like more fun than leading your people out of darkness.

A Poisoned Reality: Jared Yates Sexton on Growing up with Conspiracy Theories and End-Times Prophecy 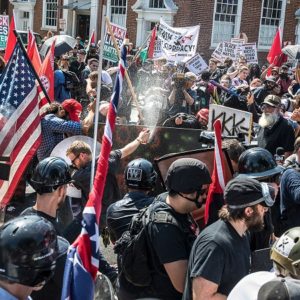 A Poisoned Reality: Jared Yates Sexton on Growing up with Conspiracy Theories and End-Times Prophecy My earliest memories are of the apocalypse. As a child I would sit on my grandmother’s knee as she read scripture from...
© LitHub
Back to top