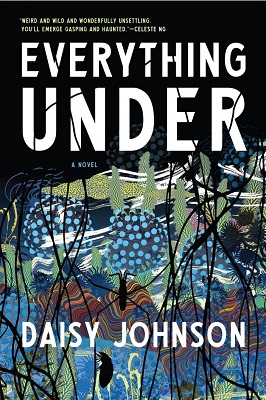 The following is from Daisy Johnson's novel, Everything Under. A reinterpretation of the myth of Oedipus, the novel follows a lexicographer as she retraces her past, searching for her missing mother and uncovering memories of the final winter they spent living in a houseboat on the canals. Daisy Johnson's writing has appeared in Boston Review and The Warwick Review, and her novel Everything Under was shortlisted for the 2018 Man Booker Prize.

It had been sixteen years since I last saw you, as I was getting on that bus. At the start of the summer the potholes in the track up to the cottage filled with frogspawn but it was nearly halfway through August and nothing much grew there any more. This place was a boat in another life. That month there were seams of damp around all the walls; in the sudden hill-winds the chimney coughed down bird’s nests, shards of eggshell, balls of owl pellet. The floor in the tiny kitchen had a slant that rolled a ball from one end to the other. None of the doors quite fitted. I was thirty-two years old and had been there for seven years. In Australia they spoke about being beyond the black stump. In America they called it in the backwoods or past the jerkwater. These were words which meant: I do not want anyone to find me. I understood that this was a trait I had got from you. I understood that you were always trying to bury yourself so deep even I wouldn’t unearth you. The apple doesn’t fall far from the tree. I was an hour and a half from Oxford, where I worked, on the bus. No one but the postman knew I was here. I was protective of my solitude. I gave it space the way others gave space to their religion or politics; I owed nothing to either of those.

For a living I updated dictionary entries. I had been working on break all week. There were index cards spread across the table and some on the floor. The word was tricky and defied simple definition. These were the ones I liked best. They were the same as an earworm, a song that became stuck in your head. Often I would find myself sliding them into sentences where they did not belong. To decipher a code. To break a note. To interrupt. I would work my way through the alphabet, and by the time I had reached the end it would have changed, shifted even a little. The memories I had of you were the same. When I was younger I went over and over them, trying to pick out details, specific colours or sounds. Except each time I revisited one it would be slightly different and I’d realise that I couldn’t tell what I’d made up and what had really happened. After that I stopped remembering and tried forgetting instead. I was always much more competent at that.

“These were words which meant: I do not want anyone to find me. I understood that this was a trait I had got from you. I understood that you were always trying to bury yourself so deep even I wouldn’t unearth you. The apple doesn’t fall far from the tree.”

Every few months I rang the hospitals, the morgues, the police stations and asked if anyone had seen you. Twice in the last sixteen years there had been a flurry of possibility: a raided boating community with a woman matching the description I gave; a couple of kids who said they saw a body in the woods but turned out to be lying. I no longer saw you on other women’s faces in the street, but ringing morgues had become a habit. Sometimes I thought that I kept doing it to make sure you were not coming back.

That morning I’d been in the office. The air conditioning was turned up so high everyone was in jumpers and scarves, fingerless gloves. Lexicographers are a singular breed. Cold-blooded, slow-thinking, careful with our sentences. At my desk—shuffling index cards—I realised it had been nearly five months since I’d looked for you. The longest gap for a while. I took my phone into the bathroom and called the old places. I had adapted your physical description to allow for passing time. White female, mid-sixties, dark- to grey-haired, five feet one, twelve stone, birthmark on left shoulder, tattoo on ankle.

I was wondering, he said in the last morgue I phoned, if we might get this call.

You always seemed forceful, without end, deathless. I left work early. There were road works at the roundabouts and the bus took a long time to get out of the city. I had never looked much like you but in the reflection of the dirty window I saw you in the angles of my face. Closed my fists over the bar of the seat in front. That evening I would pack a bag, book a rental car, turn off the water. In the morning I would drive to identify your body.

It was dark by the time I got home. I went to turn the light on in the kitchen and found myself afraid—in a way I had not been for years—in case you were standing there. I ran the tap over my hands until the water was steaming. You were shorter than I was, wide around the hips, feet so small you sometimes joked they’d been bound when you were a child. You did not cut your hair, and it was long and dark, coarse at the top. Now and then you’d have me plait it. Gretel, Gretel, you have fast fingers. You would laugh. I had not remembered that for a long time. What it felt like to touch your hair. Can you make a mermaid tail? No, not like that, try again. One more time.

“I had adapted your physical description to allow for passing time. White female, mid-sixties, dark- to grey-haired, five feet one, twelve stone, birthmark on left shoulder, tattoo on ankle. I was wondering, he said in the last morgue I phoned, if we might get this call.”

I tried to work. Break. To separate into pieces. To make or become inoperative. I would finally see you again at the morgue in the morning. Dread was a word that could be used also to describe flocks of birds taking off into the sky. The mass of birds rose up my throat, flooded out through my cracked jaw. I broke my own rule. There was a bottle of gin wedged between the fridge and the wall. I wrangled it out. Poured a treble into a glass. Raised the glass to you. Your voice talked inside my head, on and on. I couldn’t make out the words, only that it was you speaking; the sentences had your inflections, the words were simple and hard. I gritted my teeth around the edge of the glass. I closed my eyes. There was a loud clap and I felt the wind of it on my face. When I looked you were in the low doorway to the yard. You were wearing that old orange dress, pulled tight around your waist, your legs breaking out from the bottom. You were holding your hands out to me and they were full of mud. The river was connected to your left shoulder and widened out behind you. It was the way it was when we lived there: thick, nearly opaque. Except, on the kitchen tiles, I could see the shadows of creatures ducking and diving, swimming. I ran the tap again and held both hands under the hot water. When I looked back you had sidled closer, weed wrapped in the drags of black hair either side of your face, your old-cigarette smell filling the kitchen from top to bottom. I could feel you examining my life. Even in my imagination you were opinionated, critical. You peeled an egg, skinning the shell off the smooth white globe. You chased me with the hose until the ground was so sodden with mud that we fell, were coated as if bulbs just born. You looked at me out of the mouth of my kitchen with the river crashing behind you. What are you doing? you said. Is this where you’ve ended up? Just effing along.

I put on my boots, a coat and hat and went out so fast I barely closed the door behind me. There was a crust of light pollution and a sliver-moon. I walked so hard I had to stop after a bit, puffing. When I looked back there was a single square of light from the kitchen window of the cottage. A yellow socket in the hill. I couldn’t remember if I was the one who’d left it on.

I’d always understood that the past did not die just because we wanted it to. The past signed to us: clicks and cracks in the night, misspelled words, the jargon of adverts, the bodies that attracted us or did not, the sounds that reminded us of this or that. The past was not a thread trailing behind us but an anchor. That was why I looked for you all those years, Sarah. Not for answers, condolences; not to ply you with guilt or set you up for a fall. But because—a long time ago—you were my mother and you left.

From Everything Under. Used with permission of Graywolf Press. Copyright © 2018 by Daisy Johnson.

What It Means to Write About Motherhood, Part One 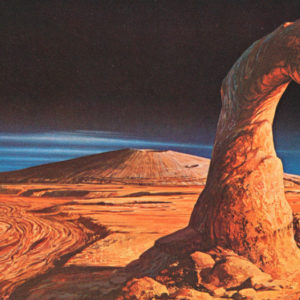 A Brief History of Sci-Fi's Love Affair With the Red Planet The first fiction about Mars arose from speculation about its moons. Although Mars was one of five planets known to the ancients...
© LitHub
Back to top